Intel’s new Core i7 architecture uses DDR3 memory, which considering Intel’s tendency to push the latest and greatest is a surprisingly familiar reference point at a time of new chipsets and CPUs. However, not everything is as it seems.


Core 2 used DDR2 or DDR3 memory in dual channel mode with an emphasis on clock speed, to reduce the inherent disadvantages of locating the memory controller in the Northbridge of the chipset. The Intel P35, P45, X38 and X48 chipsets would happily run memory at an effective speed of 1,600MHz which is a true clock speed of 800MHz (we won’t get into the intricacies of this here but from now on we are going to stick to effective speeds in this review to avoid confusion).


Nvidia went a step further with its nForce 790i SLI chipset which could clock suitable memory to 2,000MHz, as we saw with the Asus Striker II Extreme, although the fastest memory we could use during the review would ‘only’ run at 1,600MHz.


The problem is that fast memory costs a fortune with 2GB of Kingston’s KHX13000 costing £345 earlier this year. 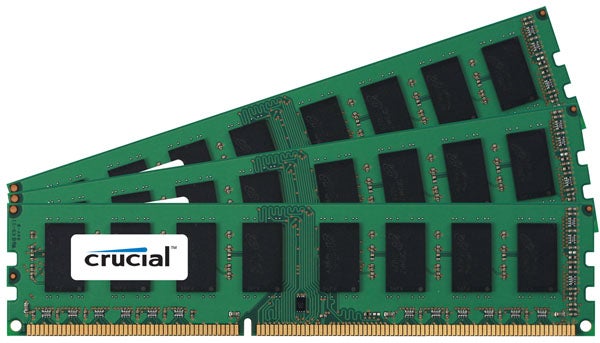 Today you can buy 2GB of OCZ DDR3-2000 for £224 which is a definite step in the right direction but very few of us wish to spend even that sort of cash on memory. Those sorts of prices also delay the move to 64-bit Windows as the prospect of 4GB or 8GB of performance RAM is little short of terrifying.


Core i7 changes the terms of the DDR3 arms race as the memory controller is now part of the CPU. This makes the communication path shorter, which in turn reduces latency between the CPU and its memory, while the move to a triple channel memory controller increases bandwidth by 50 percent in the blink of an eye. It also means that the majority of X58 motherboards have six memory slots so it is quite logical to install 3GB of RAM on a 32-bit OS instead of the usual 2GB.


Core i7 puts a significant emphasis on power saving and the Asus P6T Deluxe motherboard we are using as a test bed comes with a warning sticker which states that using more than 1.65V to power the memory on a Core i7 motherboard may permanently damage your processor.


That 1.65V figure is well within the JEDEC specification for DDR3 but it is considerably less voltage than we are accustomed to using. The Kingston KHX13000 that we mentioned runs at 1,625MHz using 1.9V while the slower KHX11000 requires 1.7V to hit 1,375MHz.


The reduced RAM voltage figure ties in with a maximum official memory speed of 1,066MHz for Core i7 so Crucial’s PC3-8500 may sound horribly slow with its speed of 1,066MHz but it is actually at the cutting edge, so to speak. Each 1GB module has timing figures of 7-7-7-20 and runs at 1,066MHz on 1.5V which does at least mean that you don’t have to mess about with power settings in the BIOS to get your new memory running at the correct rated speed.

Visually these are very dull modules with eight chips on each single sided module and no sign of a fancy heat spreader for added cosmetic interest. During our testing they remained cool to the touch so it would seem Crucial is justified in omitting any kind of cooling apparatus. Thankfully all is not lost on the levity front as a quick gander at the Crucial website reveals this little gem of a quote; The number of black components on a 240-pin DIMM can vary. Indeed.


We tested the Crucial memory on an Asus P6T Deluxe motherboard with a Core i7 Extreme 965 processor, an MSI GeForce 8800GT graphics card and a 1TB WD Caviar Black hard drive running 32-bit Windows Vista Ultimate Edition. We added in some figures for a Core 2 Extreme QX9650 on an Intel DX38BT motherboard with dual channel DDR3 for reference. The Qimonda memory was supplied by Intel as part of the Core i7 Press kit but doesn’t seem to be generally available in the UK.


At standard clock speeds the Qimonda and Crucial memory delivered performance that was effectively identical but that is only to be expected as they both use 7-7-7-20-1T timings. The latency of 71ns is significantly faster than the Core 2 setup and the bandwidth provided by the triple channel controller is three times the bandwidth of the dual channel Core 2 system. 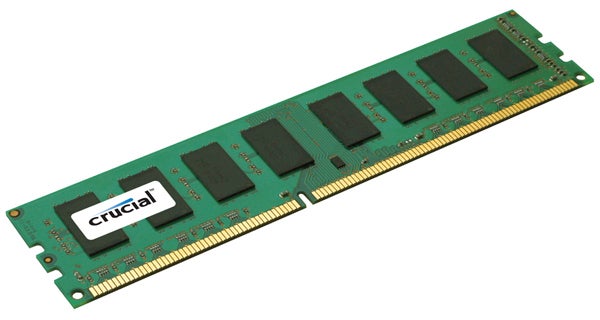 Overall performance of the Core i7 system isn’t noticeably different to the Core 2 Extreme. Overclocking the Crucial PC3-8500 to 1,333MHz on the standard 1.5V reduced the timing figures to 8-9-9-23-1T. This increased the memory bandwidth even further but didn’t have much effect on memory latency. We found that the Crucial memory would run faster 7-7-7-20-1T timings at the 1,333MHz clock speed and that change resulted in a small but useful improvement in performance.


Our next step was to raise the CPU multiplier to give a processor speed of 4.0GHz to emphasise the effect of the memory to see whether it can act as a bottleneck in performance.


With three modules of memory in triple channel mode the increased CPU speed showed a serious hike in performance. Removing a module of memory forced the system to run in dual channel mode with 2GB of memory. This reduced memory bandwidth from 21.05GB/second to 15.84GB/second but it had no effect on performance in PCMark05.


Moving the memory modules around allowed us to install three modules in single channel mode which reduced memory bandwidth even further to 9.44GB/second which is still significantly more than the bandwidth supplied by Core 2 with dual channel memory.


It is clear that Core i7 supplies a huge amount of memory bandwidth with PC3-8500 running at a default speed of 1,066MHz. It is premature to say that memory overclocking will become a thing of the past but you can load your Core i7 with cheap memory and still expect plenty of performance in return.


There’s little to distinguish this memory from any other low cost 3GB DDR3 kit from any other manufacturer but we’ve tested it and we can reliably say it’s stable and plenty fast enough. However, the real story here is just how much the tables have turned for the memory market. No longer is memory bandwidth a bottleneck for the Core i7 architecture and 3GB of Crucial RAM that can be had for just £100 will prove perfectly adequate for just about everyone.