It seems like memory cards have become a ubiquitous part of everyday life – pretty much everything from mobile phones, to handheld consoles, to digital cameras use memory cards now. The annoying thing is that the chances are that all of your devices will use different memory card formats. Take me for instance; my digital SLR uses CompactFlash, my digital compact camera uses SD, my PSP uses MemoryStick Duo, my PDA uses SD and CompactFlash and my phone uses micro-SD (or TransFlash as it used to be known). 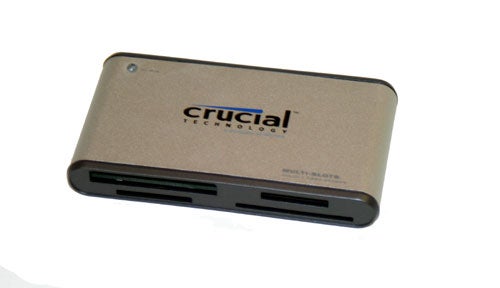 Of course the obvious answer is to use a multi-format memory card reader and luckily that’s exactly what I’ve got in front of me right now. This card reader from Crucial utilises the high-speed USB 2.0 interface, so you shouldn’t be waiting around too long for your data to transfer. It also has a removable USB cable which plugs into a standard mini-USB port on the back of the device – this is always good to see, since if you do lose the cable it will be easy to replace. The reader itself is also finished in aluminium, giving it a quality feel and making sure that it’s durable enough to withstand a fair few knocks.


Now you may have seen card readers advertised that allegedly support 20 or 25 different formats, but that is, quite frankly nonsense. This is just manufacturers playing a numbers game – most of the types are actually just different manufacturers’ marketing names for the same format. Crucial is far more honest about the specification of its card reader, some might say too honest. Crucial calls this an 8-in-1 card reader citing support for MemoryStick, MemoryStick Pro, SD, MMC, SmartMedia, MicroDrive, CompactFlash Type I & Type II. 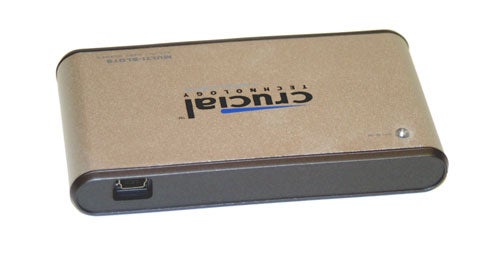 Being a USB 2.0 device, this card reader is obviously pretty nifty and is generally limited only by the speed of the cards used. I copied a 350MB XviD movie from a PC to a SanDisk Ultra II SD card via the card reader, which took one minute 18 seconds, compared to a bog standard SD card which took four minutes five seconds. What’s really interesting though, is that it’s clearly the SD interface that’s a limiting factor, because if I plug the Ultra II SD card directly into a USB port (it’s one of these cards) it’s considerably faster – the file copy took only 39 seconds and 23 seconds to read from the card.


The speed of the card reader seems pretty consistent across formats though. I shoved a 2GB high-speed MemoryStick Pro Duo card into it and ran the same file transfer – the result was one minute 16 seconds, so pretty much identical to the fast SD card.


With a price of £11.74 including VAT, this isn’t the cheapest card reader you can buy, but most of the cheaper devices will be finished in plastic rather than aluminium. Also you may not get a separate USB cable, or even MemoryStick Duo support without an adapter. Ultimately, Crucial has produced a solid product that does exactly what it’s supposed to, and a little bit more – and let’s be honest, 11 quid is hardly going to break the bank.


A well built memory card reader that supports more formats than even Crucial gives it credit for. Looking for a multi-card reader? You could do a lot worse than spend your cash on this one.