The Crock-Pot Express Multi-Cooker CSC051 is a well-designed multi-cooker for reluctant and confident cooks alike.

What is the Crock-Pot Express Multi-Cooker CSC051?

Claiming to cook any dish up to 70% faster than you could in a traditional oven or on a hob, the Crock-Pot Express Multi-Cooker CSC051 is perfect for busy families and those who want dinner on demand.

In essence, it’s a pressure cooker with the options of sautéing, slow-cooking and steaming bolted on. However, rather than leaving you to trial and error different dishes, it has a range of preset programmes that can also be adapted by time and temperature. Simple to use, with a preheat that doesn’t start the countdown until it’s at the right temperature or pressure setting, this is effortless one-pot cooking at its best.

The Crock-Pot Express Multi-Cooker CSC051 might not be that exciting to look at – its stainless-steel exterior and black finish is all-business – but it does, at least, have user-friendly panel controls.

There’s one button for each programme or cooking function, one each for setting the delay timer (max four hours) and the keep-warm (for up to four hours), and up and down buttons plus buttons for adjusting the pressure or temperature. All of which are clearly marked with a big digital display.

This level of clarity may sound like a no-brainer, but given that multi-cooker buttons can go crazy with colours, symbols and toggling functions, the relative ease of setting a cooker can’t be underestimated during a busy morning. 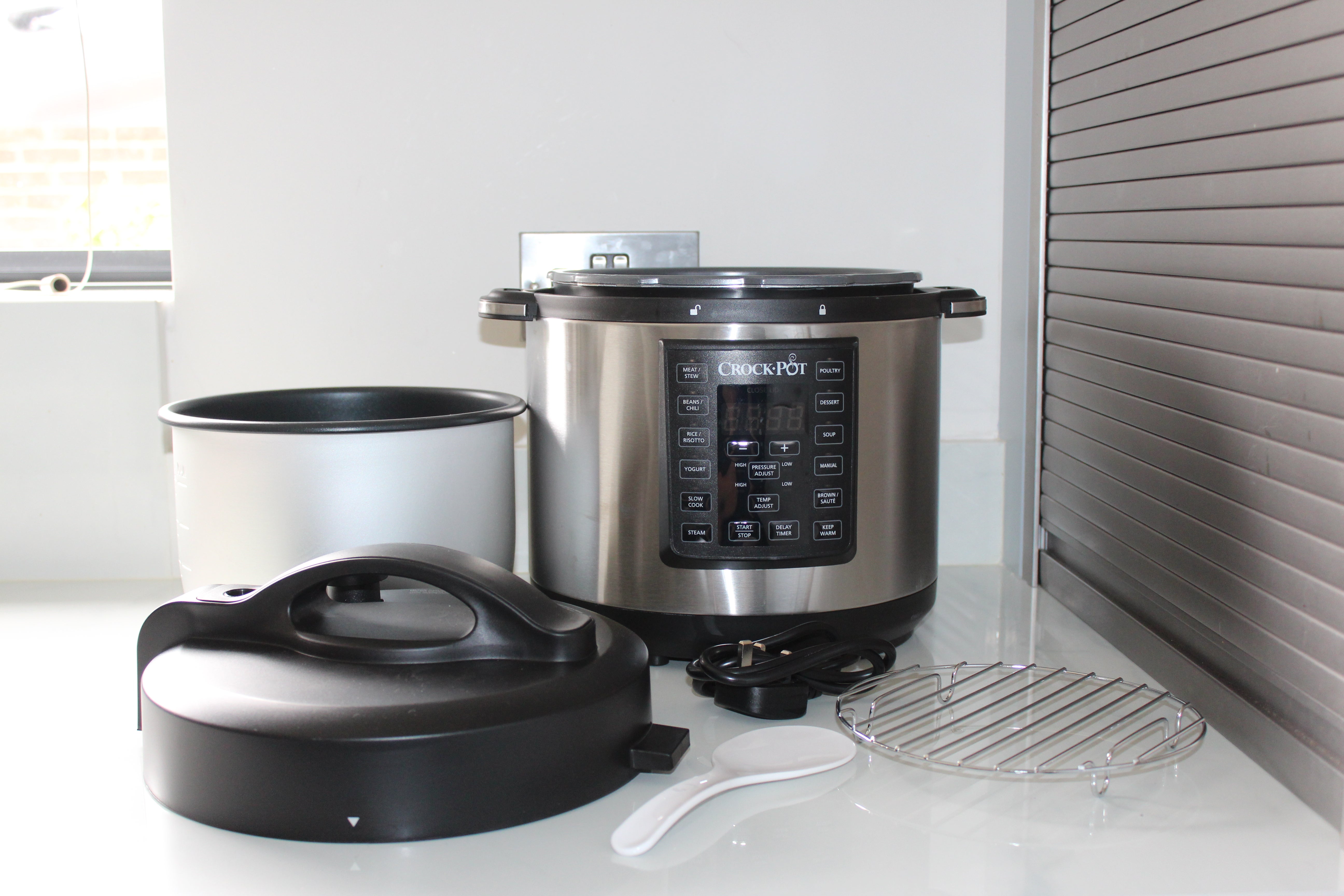 The rest of the design is pleasingly straightforward, too, with a lid that easily locks into place, a steam vent at the back that can be switched between pressure and no pressure, and a condensation collector that needs emptying after cooking.

Inside, there’s a non-stick pot and the option of using a steamer plate, perfect for vegetables and fish. It also comes with a spoon, although it’s a bit short for reaching the bottom of the pot.

Crock-Pot Express Multi-Cooker CSC051 – What’s it like to use?

There’s a slightly limited choice of where you can use the cooker, because of its shorter detachable power cable. It’s this length as a safety measure, but it does mean you’ll have to find a patch of worktop that’s close enough to a socket. There are comprehensive instructions and a recipe booklet with a quick start guide, which are both great for getting the best from the appliance.

I started by making onion soup from the recipes. The cooker’s sauté function was especially useful, since it meant not having to fry onions on the hob. While it heated up as quickly as a hob, it produced a lot of steam as they cooked without the lid on, so it would still be advisable to do this part close to an extractor. 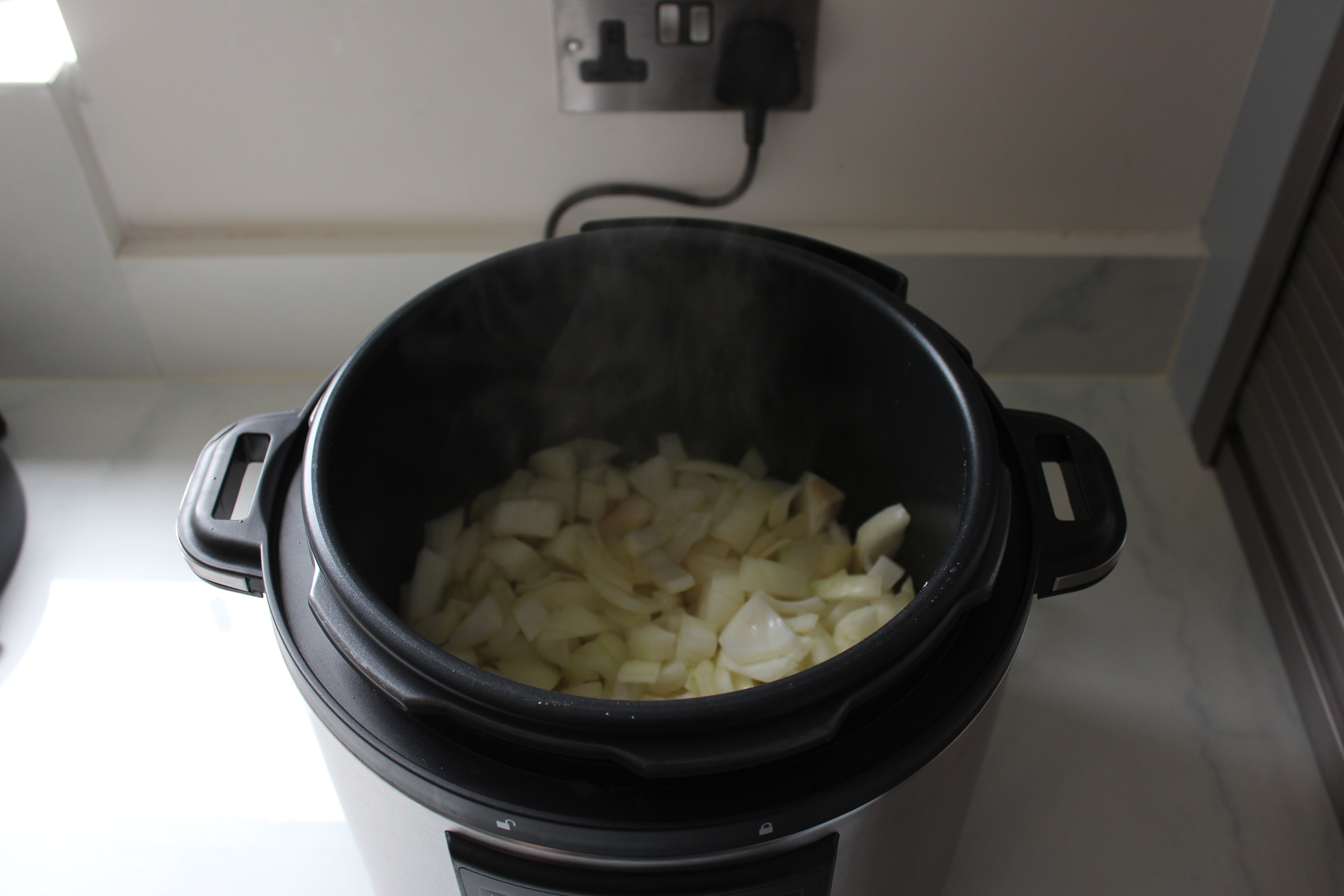 The bowl was a good capacity and easily accommodated four chopped onions. Another handy element was being able to set a time for the sauté function to prevent overcooking – in this case, 20 minutes – which left the onions browned without being burnt. After adding stock, I locked the lid into place and turned the steam valve to seal. Since it’s located at the back, it’s easy to forget to do this until steam starts to rush out of it as a reminder. I set it on the Soup programme for 10 minutes. It took about five minutes for the pressure to build before it started the countdown.

The preheat was also handy and is part of all the programmes, turning the display to say Heat before the countdown of actual cooking begins. 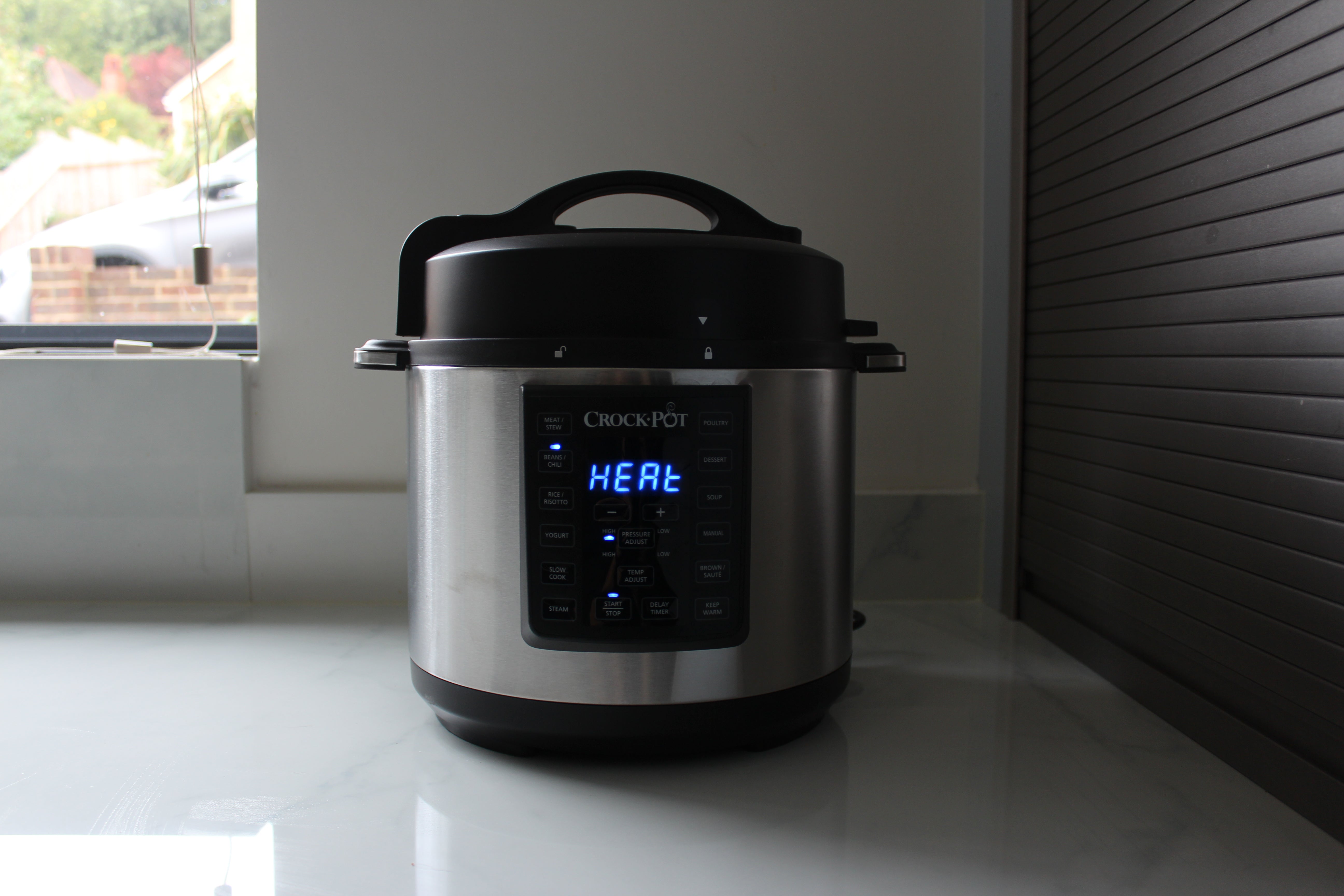 All the recipes cooked under pressure also require time for this pressure to release, so in this case, it took about 10 minutes before I could open the lid, meaning the 10-minute soup actually took 25 minutes before it was ready. The soup itself was an ideal consistency – the pieces of onion were soft but not mushy.

Next I made chilli, again using the sauté function to brown mince for eight minutes. There’s the option of low or high for this function, but the recipe didn’t specify which to use so I opted for high. After removing the beef, I added other vegetables and sautéed again for a further few minutes, before placing all the ingredients in the pot and topping with the lid. This was cooked on the Beans/Chilli function for 10 minutes.

I liked the multiple options the cooker has to customise this dish – I could have extended the cooking time, pressure or temperature to customise the recipe, or used the delay timer so it would be ready later on. Again, it took about five minutes for pressure to build and the same to release. The chilli was rich and flavourful, with no burnt chunks of meat or dry beans. 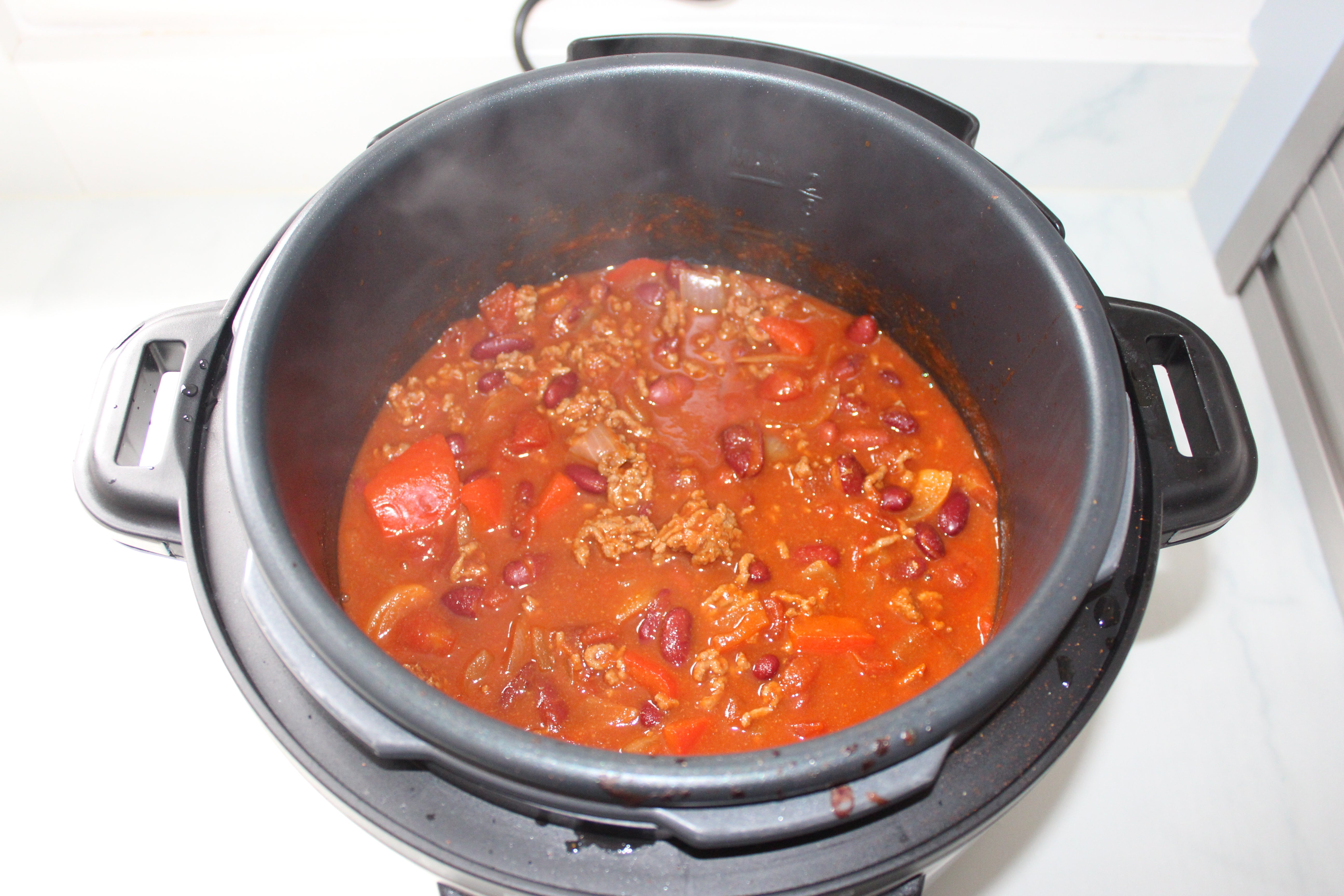 Finally, I used the Express Multi-Cooker to make a Chocolate Volcano Pudding directly in the pot. This involved greasing it before pouring in the pudding mixture and topping with chocolate sauce. It was then slow-cooked without pressure (the steam valve open) for three hours. The finished pudding rose well and was thoroughly cooked, but since it was incredibly soft and gooey, it was difficult to remove from the pot and stuck to the sides. It could have been easier to line the pot with baking parchment. 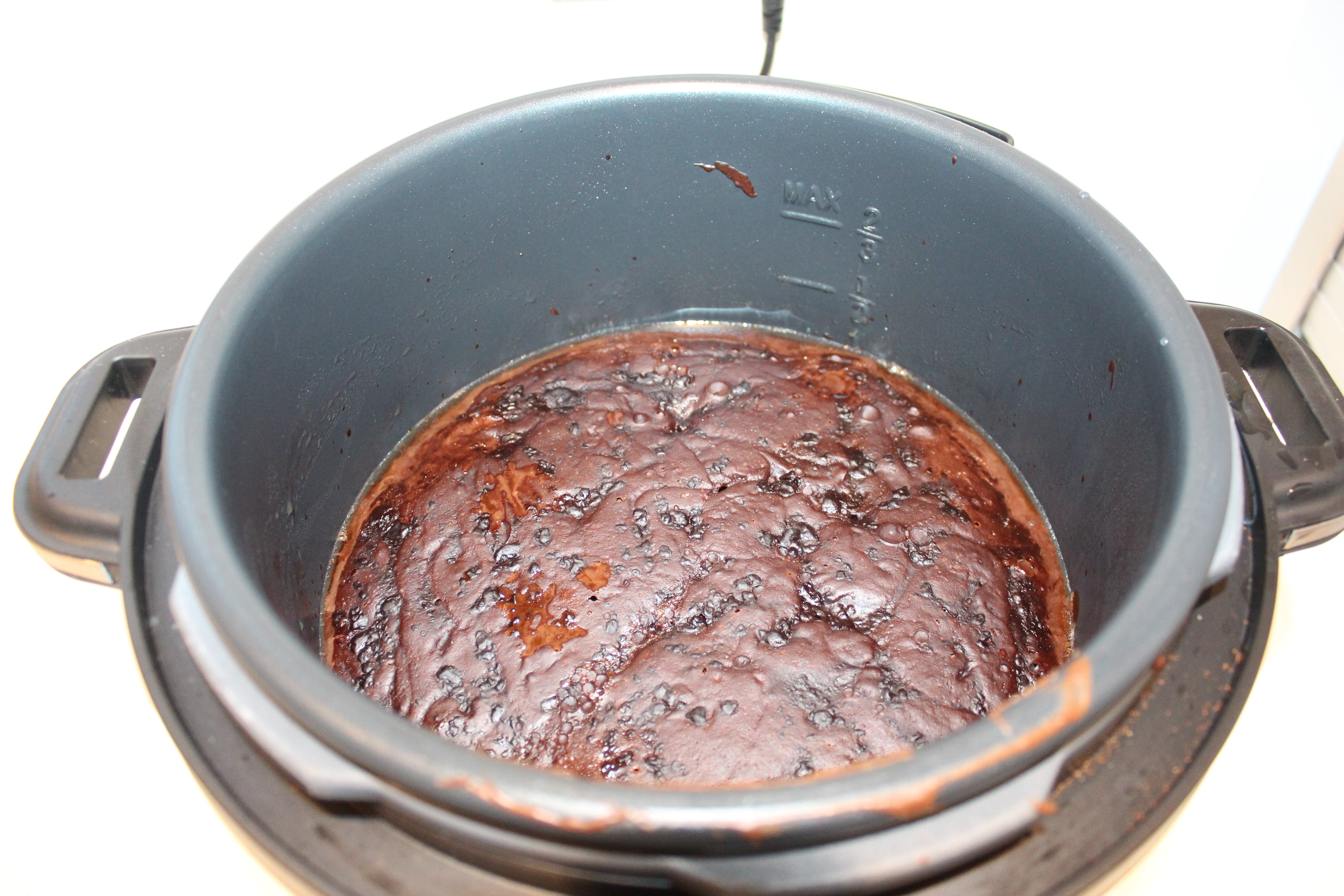 While the condensation collector was easily removed to be emptied, I struggled to refit it. The pot was dishwasher-safe, but it recommends hand-washing to preserve the non-stick coating. I found both methods of washing equally convenient as food debris was easy to remove.

While there isn’t a huge amount of difference between electric pressure cookers, it’s worth noting that this one cooks incredibly well, is one of the easiest to programme, and simplest to clean.

The slow-cooking function means you have a huge amount of flexibility over how you cook and when food is ready, too. All this combined with a generous capacity makes it ideal for families, batch-cooking and busy households.

My only niggle is that I’d like a pot durable enough to throw in the dishwasher every time without being concerned I might be shortening its lifespan. When cookers are this good and as easy to use, you might find yourself using your hob only at the weekend.

The Crock-Pot Express Multi-Cooker CSC051 is a well-designed multi-cooker for reluctant and confident cooks alike.