Once in a while, a product comes along that makes us sit up and take notice. Sometimes it’s because of the way it looks; sometimes because of it’s incredible speed and power; and other times it’s because it makes one particular task so easy and straightforward that we wonder why no-one else has tried it that way before.


When I first extracted Creative’s new MP3 player – the Zen X-Fi – from its box and began to play with it, I had a similar experience. Not because of any of the above reasons, but because it does something I’d never thought I’d need, or would ever see on the spec sheet of any MP3 player: you can use the X-Fi to send and receive instant messages. 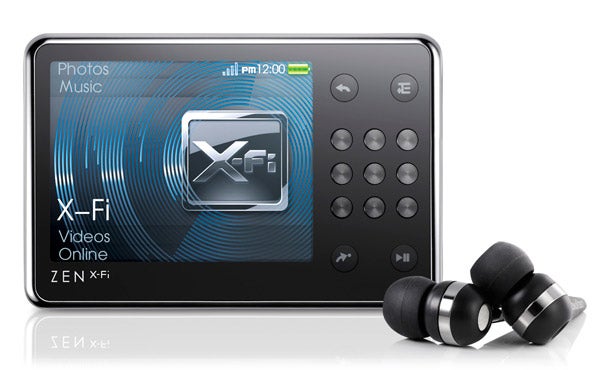 The X-Fi has a Wi-Fi adapter (802.11b/g) built into it and once you’ve used this to hook up to your home Wi-Fi network, you can register it with your Yahoo Instant Messenger or Windows Live Messenger accounts and get messaging. Alas, for the X-Fi, this is not the killer feature Creative might have hoped for. Quite apart from the fact that set up is tortuous – you have to create an account on Creative’s website, enter your chat login details there, then login twice on the player before you start – text entry is painfully slow.


The X-Fi is equipped with a nine-button control console to the right of its 2.5in 320 x 240 resolution screen and this is used to tap out letters. But instead of working, as you might expect, like T9 or multitap text entry on a mobile phone keypad, you use it like a directional pad to highlight and then select letters on a screen-based virtual keypad. There is an alternative way of entering text, where letters are arranged around the edge of the screen, but this is even more confusing and difficult to use. 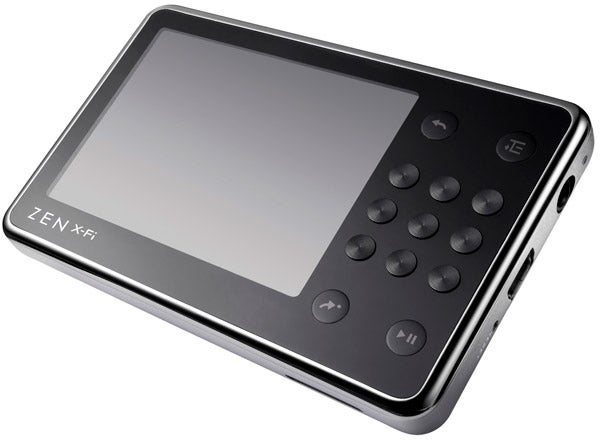 Fortunately for the X-Fi, the rest of the product is a lot more impressive than its IM abilities, and it’s absolutely crammed with features. With the Wi-Fi connection, for instance, you can also stream and download tracks from a networked media library. In this way, you can use it as a convenient, portable music-streaming gateway and connect it to any music system to gain access to your PC’s music collection.


Transferring tracks is a little slow over Wi-Fi – you wouldn’t want to copy more than a few tracks at a time – but it’s a nice feature to have. Browsing the media library on your PC while you listen is a surprisingly pleasant experience, and for copying across the odd album, it works very well. The Wi-Fi also allows you to listen to a selection of podcast material stored on Creative’s servers, including some BBC content, but this is of less use since you can’t download content to the device.

Other features include decent 16GB or 32GB capacities (there’s an 8GB version but this doesn’t have Wi-Fi); an FM tuner; a built-in speaker – for people who like annoying others on public transport – basic synchronisation of contacts tasks and calendar appointments with Microsoft Outlook; an integrated microphone so you can turn the X-Fi into a dictaphone if you want; and memory expansion via an SDHC memory card slot. That’s quite a list.


In terms of its design, it’s a little bit of a disappointment. It’s not particularly slim at 12.8mm or small at 83mm x 55mm and though the flat gloss front, chrome-effect trim and matte silver rear look smart enough, the all plastic construction is nowhere near as luxurious as you get with any of the iPod products. 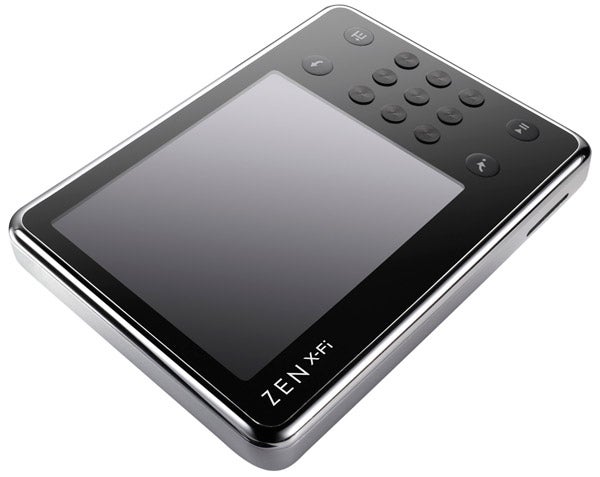 But that strange control system does work well once you get used to it, and in conjunction with Creative’s excellent user interface, it makes the X-Fi a pleasure to use. The raised buttons make it easy to skip tracks, pause and change volume without having to take it out of your pocket. The menus are customisable with different graphical themes and colours, and items on it can even be re-ordered if you so wish. There are search and artist look-up functions, on-the-fly playlist creation, and you can also place bookmarks using the context-sensitive menu system – useful when listening to long podcasts.


Music format-wise, it’s pretty impressive too. Not only are MP3, WMA and WMA protected formats supported, but also AAC (non-protected) and Audible for fans of audiobooks. Video support is less arresting. Though video footage looks great on the 2.5in screen, the X-Fi won’t play anything back that isn’t at or below its native resolution of 320 x 240, so you’ll almost certainly have to re-encode or transcode material you’ve downloaded from the Internet using the bundled software. The X-Fi supports DivX, XviD, MPEG4 and WMV9 file types. 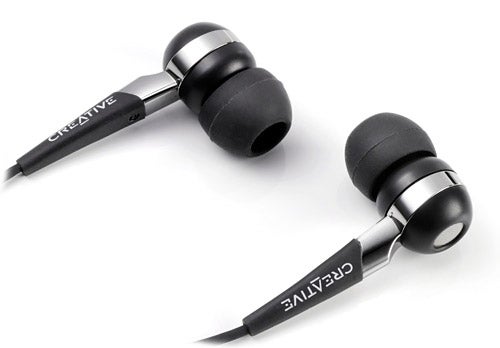 One of the most impressive aspects of the X-Fi, however, is its bundled headphones. Even with more expensive players, such as the iPod Classic or Archos range of media players, the supplied headphones are usually so unutterably awful that I can barely bring myself to put them in my ears. Not so, with the EP-830’s included with X-Fi. If you bought them separately they’d set you back £30, and sound quality is very respectable. I prefer Sennheiser’s CX400 headphones for this sort of money – they offer more punch, focus and power than the EP-830’s – but if you don’t already own a pair of decent noise isolation phones I guarantee you’ll be impressed with how these sound.

For serious testing, however, I switched to my reference headphones – a pair of Grado SR325’s and, feeling a touch contrary, I kicked off my listening tests with the Gypsy Kings and their live recording of the track, ”Quiero Saber”. It’s a largely acoustic track with lots of Spanish guitar and a typically difficult-to-recreate live ambience. I immediately noticed that the X-Fi has excellent clarity at the top end, which helped to recreate the atmosphere of the live venue, but had a tendency to sound flat elsewhere in the sound spectrum, which led to a bit of a clattery, clashy sound. 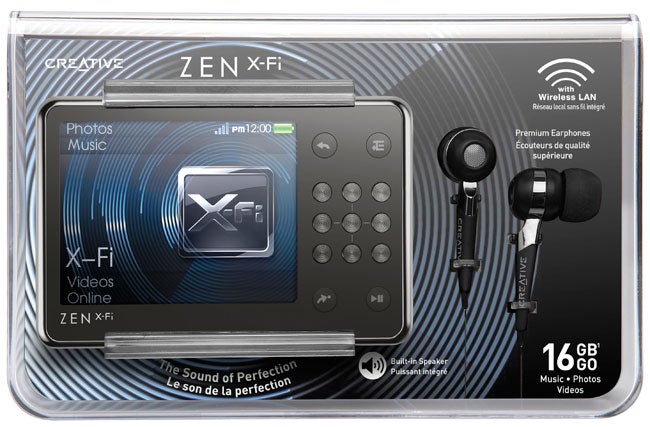 This effect was magnified when I moved on to classical and then to more complex material. Loading up some metal and H.I.M.’s popular ”And Love Said No”, and it’s clear that the X-Fi lacks the oomph and smoothness that the iRiver Lplayer has, with vocals and electric guitars sounding a little shouty. Turning the bass boost on helps to butter things up a bit, but this also casts a bit of a veil over the sound, masking some of the all-important details. Creative’s much-touted X-Fi sound enhancements don’t do much either: X-Fi Crystalizer enhances the top end but compresses the sound elsewhere; X-Fi Expand has the effect of putting the music into a padded cell and making you listen from the outside.


It’s not awful sound quality by any stretch of the imagination, it’s just a little disappointing given the price of the player and the calibre of Creative’s other digital music players. Moreover, it places the X-Fi just below both iPod’s nano and iRiver’s Lplayer for me in terms of overall quality.


Despite this, though, the X-Fi remains a highly impressive player. It’s absolutely crammed with features – some useful, some not – has good storage capacity and its memory expandability allows it to challenge even some hard disk-based players. Sound quality is good, if not outstanding.


But whether it can be viewed as a good deal or not depends entirely on whether you already have a pair of decent noise isolation headphones or not. If you haven’t invested yet (shame on you!) it’s a decent package; if you already own a pair of Sennheisers or Shures, however, £150 for a 16GB player (even one with so many features) looks a little overpriced.