When I was a kid the only entertainment we had on a long car journey was listening to story tapes on the car stereo, playing I spy and having fights with my brother on the back seat. How times have changed.


In the past thirty years the possibilities for travelling entertainment have gone from time-honoured to high-tech, kicked off by the appearance of the very first Walkman and crowned today with MP3 and personal media players (PMPs). Go out and spend a couple of hundred quid now and you can have widescreen entertainment in the back seat, watch your favourite TV, look at photos and listen to your favourite music all on the same device. Creative’s Zen Vision W is aimed at letting you do all that – on one multifunctional device.


It’s Creative’s flagship media player – a sleek-looking widescreen PMP that is intended to ooze ‘ooh’ factor. It’s not particularly slim but with a 4.3in screen in place and only a thumb-wide strip down the right of the screen dedicated to controls, it still manages to remain pocketable, measuring 134 x 75 x 22mm. 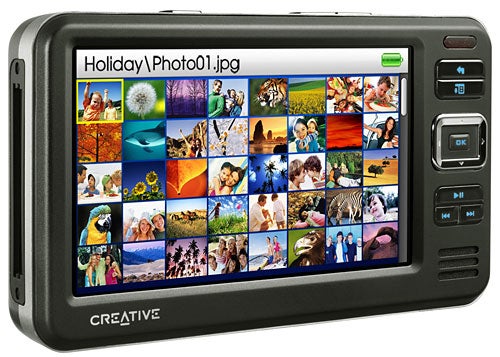 Around the edges you’ll find a CompactFlash (CF) card slot good for type I and II cards, a mini-USB socket for file transfer and charging, a docking port for the optional cradle, an analogue AV out, DC input, headphone socket and further controls on the top edge for volume and on/off/hold.


But with so many smaller players now offering video playback, and Archos’ fifth generation players imminent, does the Zen do enough? On the face of it, it would certainly seem so. It has a widescreen, where the latest Archos players do not. And at a smidgen over £200 for the 30GB version, it seems to be pretty good value too.


It’s extremely quick to transfer large files – I copied across a 922MB video file in less than two minutes over USB 2.0, which puts most smaller media players to shame. That CF slot means it has immense potential for expansion too. Connect a CF 5-in-one card reader, for instance, and you’ll have off-board storage for most digital cameras.

Battery life, at least for video, is par for the course. The specifications claim around 4.5 hours for watching video and I couldn’t find fault with that claim, though I’d have liked more than 13 hours for music playback.


Delve a little deeper, however, and cracks begin to appear. I’ll address the screen first. It has a decent viewing angle and is plenty bright enough for shared viewing in a variety of circumstances – on a train, plane or on the back seat of the car – but it can’t match the forthcoming Archos devices for resolution; 480 x 272 compared to 800 x 480 on the fifth-gen Archos players.


Neither is this a touch screen as the forthcoming Archos players are. And to compound this the Zen’s controls are fiddly, with the familiar d-pad control too small for anyone with average-to-large-sized thumbs to operate comfortably. It’s a shame because the navigation engine is actually quite intuitive and offers nifty features such as on-the-fly playlist creation for music, context sensitive menus that can be accessed with a single button click, plus the facility to browse by initial letter, which speeds up searches of long lists immensely. 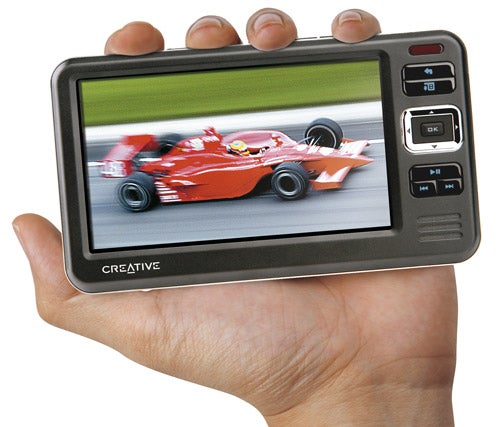 We could forgive all of this if the Zen W’s file format support was halfway decent, but unfortunately it isn’t. On the video front we have support for WMV, MPEG 1/2/3/4-SP, XviD, Motion-JPEG and DivX. But alas there’s only support here for versions 4 and 5 of DivX, despite the fact that version 6 has been out since the dawn of time. There’s no VOB, MOV or native DVR-MS file support either. All of these must be converted using the supplied software – which can involve a tedious wait.


As a music player, the Zen W is a fine machine too, but is afflicted by the same problem as video playback. There’s plenty of power on tap – enough to drive my Grado SR325i headphones to reasonably loud volume levels – and sound quality is excellent. But file format support is weak, with no support for AAC, Ogg Vorbis, or lossless file types such as FLAC, WMA and Apple Lossless. The Vision is restricted to just WMA, MP3 and WAV files.

And there are other holes. You can’t record direct from FM. There’s no line-in. You don’t get a kick stand, so you have to hold the Vision W while watching it, and that could turn out to be a pain in the wrist after an hour or two of movie-watching. There’s no facility to record video from an external source and no Wi-Fi, both features that the new Archos players support. And the bundled headphones are the usual so-so affairs. They’re by no means the worst I’ve heard and don’t hiss in quiet sections, but they are over-bassy and sound muffled at the top end. 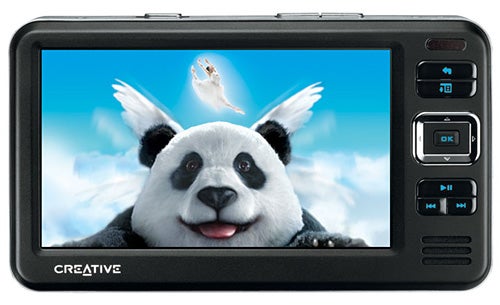 On top of all this, the software is the usual proprietary mess of multiple applications that lack a coherent focus. Fortunately you can simply drag and drop files to the device and use Windows Media Player. However, when you’re transferring so many different file types and folders, a better, more coherent way of transcoding and transferring files that doesn’t involve syncing the whole of your music and video folders could surely have been worked out.


Creative’s Zen Vision W is a capable machine, despite the flaws. The wide screen is bright and does a fine job of displaying movies. Audio performance is excellent too, and size-wise it really isn’t that bad, though if I was being picky I’d have liked it to be a touch slimmer. £215 is also very reasonable for a widescreen player with so much capacity. However, there is a sense that it is being left behind in a fast-moving market. And with the fifth-gen Archos players appearing very soon, anyone in the market for a fully-featured PMP would be better off adopting a wait-and-see attitude.