It seems as though MP3 players are becoming increasingly feature packed these days, indeed the term “MP3 player” seems like something of an anachronism because of it. The Creative Zen V Plus is a perfect case in point. In addition to its audio capabilities it can playback video, display photos, receive FM radio, record via a Line-in or internal microphone and even synchronise with your Outlook Contacts and Calendar information. If nothing else it makes for great press release material, but either way it’s difficult to deny that the Zen V Plus packs a lot into its sleek and compact casing.


Weighing a mere 43.5 grams and measuring 43.5 x 67 .5 x 15.9mm it’s very small too; as is the 128 x 128, 1.5in OLED display. Our review sample is the black and blue 8GB version, but the Zen V Plus series is also available in 1GB, 2GB, and 4GB capacities as well as a variety of different colour schemes based on a black or white casing with different colour ‘accents’. Alternatively there’s the Zen V, which is more or less identical but lacks FM radio and is only available in up to 4GB capacities. 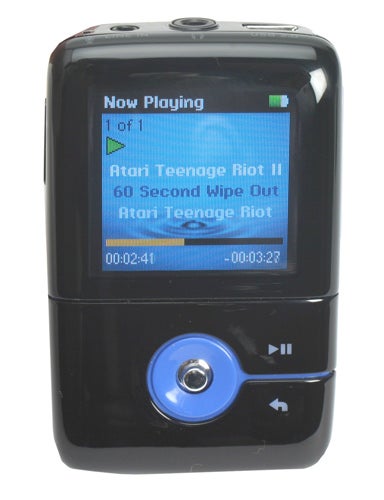 Format support is full of all the usual suspects, MP3, WMA and WMA DRM with support for music services using Microsoft’s PlayForSure platform. Regrettably there isn’t any support for OGG or any of the lossless formats that are becoming increasingly popular. Obviously, any Apple based format isn’t supported either but there is support for the Audible audiobook service.


In the box, Creative supplies a set of earphones, a drawstring pouch, lanyard, mini-USB cable, a Line-in cable, neck strap and a silicone protective casing. There’s also a software installation CD and Quick Start guide, while the full manual is supplied on the CD. The provided earphones aren’t the worst, they’re fine for casual listening but I’d still get hold of something better especially since the sound quality of the player is actually pretty good.

Initial impressions of the design are generally positive; it’s easy on the eye while the size and shape means it fits nicely into your palm. The various buttons are also intelligently laid out; the volume rocker on the right edge is perfectly situated for the thumb – of right-handers at least – and just below it is the record button. On the left edge are the Power/Hold slider and a recessed Reset button. For navigation there’s a 5-way joystick on the front of the player, with Play/Pause and Back buttons just to the right of it. On the top edge are all the connections, with a mini-USB port, 3.5mm headphone jack and 2.5mm Line-in.


The player charges via the mini-USB cable provided and though Creative doesn’t supply any other chargers, one could theoretically use any charger that has a mini-USB connection. Once fully charged the player is good for an impressive15 hours use, and can even do slightly better depending on usage.

Regrettably this initial good impression is let down somewhat by the rather cheap feel of the device. Everything just feels a little too plastically, with the 5-way joystick being particularly culpable. Moreover, the way the device is put together means the bottom half of the front fascia, just below the screen, tends to creek under pressure – only adding to the impression of cheapness.


It’s the joystick, however, that’s the most frustrating part of the design leaving you wishing there were simply a set of directional buttons. Not only is it too small, but it’s very stiff which can make switching tracks awkward – especially when the player is sitting on a desk rather in your hand. Also, when cycling upward through menus one can accidentally press inward causing you to enter a menu unintentionally. There’s also no accelerated scroll, making going through a long list of tracks a tiresome task.

Speaking of tiresome tasks, getting tracks onto the device isn’t without its frustrations. Creative has been wise enough to enable drag and drop, while you can also right click on any file or folder and send it to the player to perform the same action – this isn’t the source of my complaint. No, the real problem is simply the amount of time it takes to get files onto the device. As a test I used a 350MB video file and found it took just over three and a quarter minutes to transfer to the device, averaging a piffling 1.8MB/s. Consequently, getting tracks onto the device can take and inordinately large amount of time. Patience is a virtue, but this just stretches it to a fault.


Happily, the provided software is a mostly decent affair. Creative’s MediaSource 5 Organizer is a bit of train crash, but the Zen V Series Media Explorer is far more palatable. It presents itself as part of Window’s Explorer window, with plenty of options for adding files using an intuitive add/remove interface – another variation of drag and drop – or the Smart Fill feature which selects music randomly to fill your player. Support for drag and drop means the V Plus can also be used as a Mass Storage Device, although the disappointing transfer performance is a major detractor in this instance. 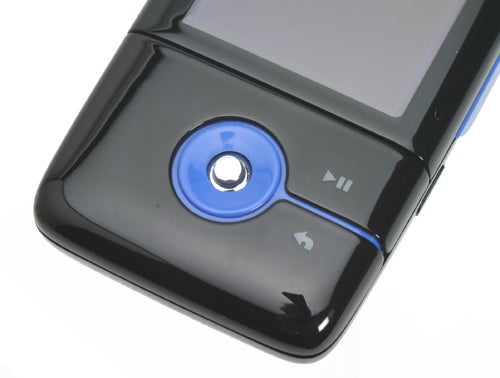 Importantly it doesn’t try to over complicate things, making transferring files to the device none too complicated. Alternatively you can also use Windows Media Player 10, which is much improved over previous iterations and need not be feared.


The player itself has a functional, if rather uninspired, interface. Everything is displayed in list format, with a fairly standard Music Library layout. There’s support for Playlists and Bookmarking, though I found making playlists using the player rather slow and laborious and is better handled using the software provided.

As noted previously the V Plus packs a hell of a lot of features, but it’s important to note that not all of them are entirely necessary. Video playback is mostly pointless; the player can only read files converted into MJPEG – an uncompressed 15fps format that actually makes files bigger despite reducing them to 128 x 128.


So, for example, my 450MB video file came out at over 900MB and was more or less unwatchable. Similarly, photo viewing on the device isn’t especially worthwhile since the screen isn’t especially large or sharp, making it sufficient only for album art. I also found the screen performed very poorly in direct sunlight, proving unreadable without some kind of shelter. 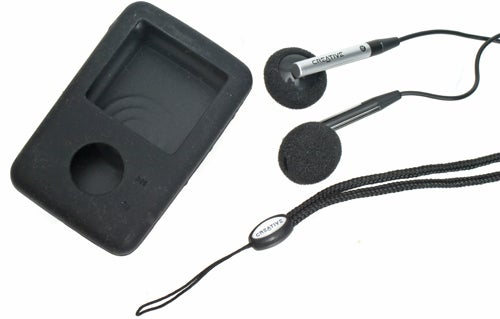 One of the more unusual features is the ability to sync your contacts, tasks and calendar information to the device but I can’t help but feel this is a classic piece of tokenism. Ultimately, only a tiny minority will use or want such a feature and those that do could possibly be deranged and in need of professional help – (insert disclaimer here).


Other features like FM radio, Line-in and microphone recording are rather more welcome and certainly add to the attractiveness of the Zen V Plus. Naturally, you need to be in a strong signal area to use the built-in radio receiver but Creative also sent us a sample of its TravelSound Zen V Docking Speakers. These are designed specifically for the Zen V range, which slots onto a rotating dock which feeds off the 3.5mm jack and mini-USB port. 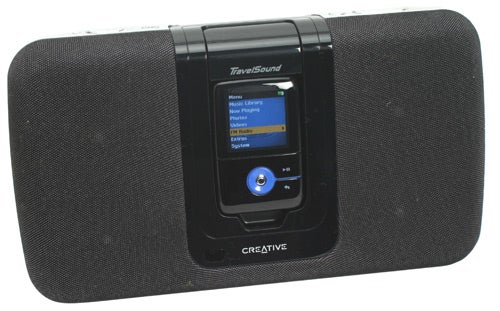 Among other things it has an aerial, which means you can plug the player into the dock and use the external aerial for radio. It also features a USB port, so you can connect to a PC/Notebook via the dock and it can be packed full of AA batteries for portability. At a around £55 it’s keenly priced too, and if you do plan on getting a Zen V Plus it’s worth considering getting a set of these as well.


Finally, it’s worth considering that thanks to its lightness and the central positioning of the 3.5mm jack the Zen V Plus could be an ideal gym partner. Combined with a good set of neck strap earphones it could do the job nicely, and there’s an Armband that can be bought if you want something slightly more secure. It’s another potential use for the Zen V Plus, which can only be a good thing.


Ultimately, however, one can’t help but feel the Zen V Plus is a missed opportunity. Excellent lightweight design and a decent feature set is let down by cheap construction, a clumsy 5-way joystick, awkward navigation and a poor quality display. Above average battery life and general adaptability do make up for these failings somewhat, but not enough to make them fade into insignificance.