If you can’t work out that Creative’s latest micro-sized MP3 player is aimed at giving Apple’s Shuffle a well-aimed kick up the rear end, you need glasses, because it’s about as obvious as it gets.


In fact Creative seems to have taken a checklist of the Shuffle’s specifications and gone through each feature in turn, making sure it improved on each and every one. The Zen Stone Plus is smaller and lighter than the Shuffle. About the size of a small pebble, and a similar shape, it’ll fit and disappear into any pocket without you noticing it’s there. It’s so tiny and light you might risk missing it when putting shirts and trousers into the wash – so be careful. 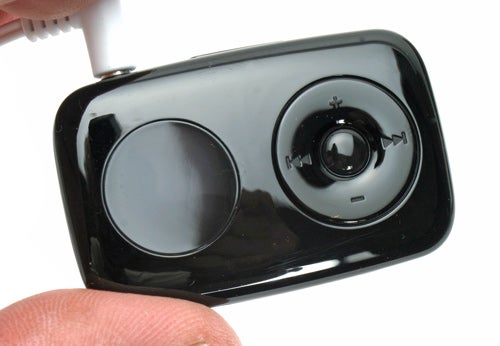 At 2GB it has twice as much memory as the Shuffle – enough for around 500 MP3 tracks at 128kbit/sec. It has a microphone (the Shuffle doesn’t), so you can use it as an impromptu dictaphone. It has a standard mini-USB connection, so you don’t have to carry the daft little docking station around with you as you do with the Shuffle, and with the stubby USB cable that comes in the box, you can simply drag-and-drop music files to it, rather than being force to use proprietary software.


It has an FM tuner built in and even a stopwatch. And the Zen Stone Plus is also cheaper than its aluminium-clad rival too. Though the price typically comes in around 50 quid – the same ball park as Apple’s diminutive clip-on player – you can get one for as little as £39.

But perhaps the most obvious improvement over the Shuffle is that it has a screen. Next to the d-pad control sits a tiny circular, blue and black monochrome OLED display, 19mm in diameter. It allows you to see what’s playing, browse music and change settings while you’re away from your PC. It’s undoubtedly a better overall package, on paper, than the Shuffle, but does throwing extra features at such a simple concept actually make a better product?


Alas, not in the case of the screen. While it’s good to know what track you’re listening to, the screen doesn’t actually add that much in terms of navigation and browsability. There are two main problems with it. First, the display only shows the track name, not the artist nor the album title.

But this pales into insignificance next to the second handicap, which is that you can’t actually browse the music on the player freely while listening to music. Try switching albums in the music browser mode and the player instantly starts playing from the new folder. Try looking at what’s coming up and it does the same thing. It makes you wonder why Creative bothered putting a screen on the thing in the first place.

Usability, which comes top of the list with Apple’s Shuffle, isn’t great either. The d-pad is small and difficult to operate accurately and the button in its centre is fiddly and requires a delicate technique if you don’t want to depress any part of the ring around it. It’s not a patch on the Shuffle’s effort. 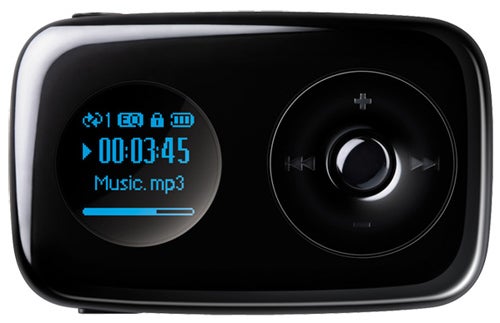 And neither are the looks. Some may like the plastic pebble look, but it just doesn’t do it for me, and after a week of use it was already picking up scratches and smudges like crazy. The finish isn’t particularly smooth and though build quality seems solid enough, the whole thing just feels, well, a bit cheap. Battery life is down on the Shuffle as well. At 9.5 hours it’s 2.5 hours short, though that should be enough to run two marathons or ride a stage of the Tour de France, if you’re that way inclined.


Fortunately, in terms of sound quality, it’s pretty good. It’s not the best in class, but it keeps up with the Joneses. As with the Shuffle, there’s plenty of detail with not much oomph in the bass department. Simple pop and acoustic sounds good – the piano on KT Tunstall’s Heal Over are rendered nicely, while Damien Rice’s tortured vocals on O sound sharp and clear. 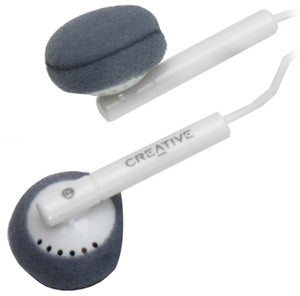 But the gut wrenchingly deep bass on Nitin Sawhney’s Beyond skin just isn’t, well, gut-wrenching enough, and the bass guitars on Pat Metheney’s Here To Stay are a bit on the thin side. You can tweak the EQ settings to boost the bass – one good use of the screen – but the sound still lacks a little presence at the low end. Furthermore, the supplied earbuds don’t exactly help matters, making it sound like you’re listening to music in a cardboard box. You’d be well-advised upgrading them at the first opportunity.


If anything the sound quality is slightly better than the Shuffle, but if good sound quality’s your main priority for around £50, you’d be better off with the Sony NW-E015. 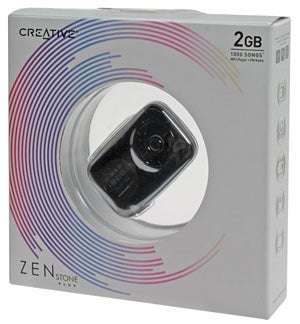 
Apple probably won’t lose any sleep over the Zen Stone Plus. It may have more capacity, features and slightly better sound quality than the Shuffle, but it’s fiddly to use and the screen is more of an adornment than a truly useful addition. It doesn’t look as good, doesn’t have that really handy built-in clip, and battery life isn’t great.


In the end, I can’t help being disappointed in what has widely been touted as a Shuffle killer. Those who desperately want more capacity will probably choose the Plus over the Shuffle. Anyone with an Apple axe to grind or a library of WMA tracks will too, but I really can’t say it’s the better player for all that.