Do you remember the mirror universe from the original series of Star Trek? The one where, after a transporter glitch, some of the crew end up on an Enterprise from an alternate universe, where everything is similar but slightly skewed. Well, as a seasoned iPod user, that’s what it felt like to use the Creative Zen Sleek. Everything, felt familiar, but at the same time different. Touch strip instead of click wheel, WMA vs AAC, Napster support instead of iTunes… but which one is the evil empire? 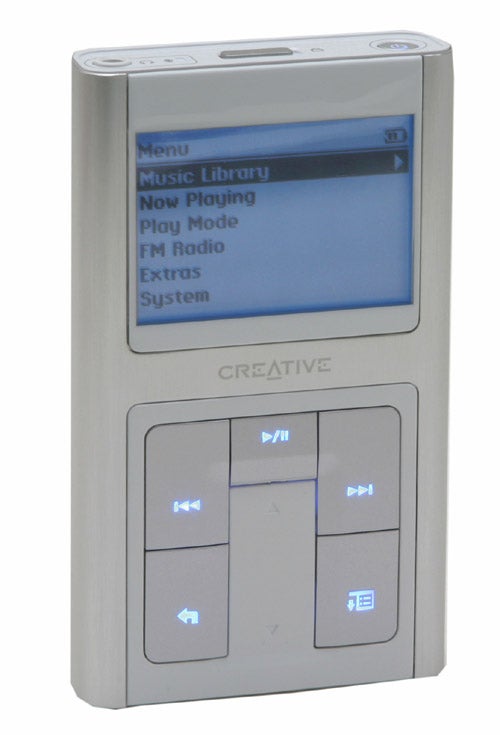 One almost has to feel sorry for Creative. It’s been trying right from the outset of MP3 players to compete with Apple. In fact, if memory serves, it beat Apple to the punch by introducing the original hard disk jukebox, around a year before the iPod was launched. But ever since the small white monolith appeared, Creative’s been chasing the market. In an attempt to win the fight it has tried beat Apple players on a feature by feature basis without as much thought going into design. And while Apple focuses on around three players at any one time, Creative seems to have about 87, which just shows that the company is as confused as we are.


Having said all that though, if I wanted to buy a 20GB audio player right now this would be a contender. It’s lighter than an iPod, despite the fact that it integrates a microphone and FM tuner and can record from both. And unlike previous efforts it’s not a pig to use. Though it’s not as pretty as iPod, it’s more scratch resistant, so might retain such looks as it’s been gifted with for longer, which helps to average things out. 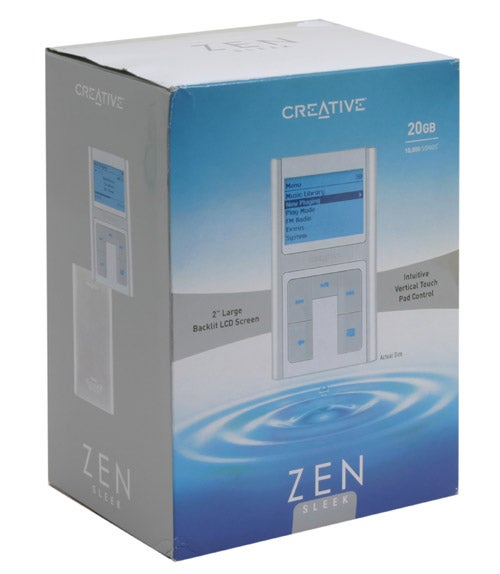 I haven’t had much contact with Creative’s players since it launched the original Zen, which was frankly, an awful brick of a player. Since then, it’s clearly decided to ape the iPod as much as it can. The Zen Sleek echoes the curves edges of the iPod mini (RIP), and meshes it with the touch strip that first appeared on the Zen Micro. The power plug, the sync cable and the headphones are also white. Hmm, I wonder where they got that idea from? The player itself is a two-tone silver and white. The metal wraps round the edges like an iPod mini but doesn’t go round the screen. Instead there’s a grey frame, which spoils things somewhat. Ok, it’s not as good looking as iPod but at least it’s not ugly, which is a bonus.

An array of five buttons surround the touch strip, which works quite effectively. Perhaps the biggest disappointment is the screen. Whereas colour has made it to the Zen Micro Photo, it hasn’t yet got as far as the Sleek, which is in sharp contrast to the now colour-only iPod. So no photo slideshows and no album art work on this player then – hardcore music all the way.


While iPods are from the Mac world of the single mouse button, this Creative is a creature from the Windows world. As such, is has a context menu button. This brings up options that depend on what you’re doing at the time, which, I guess, is why it’s called a context menu. 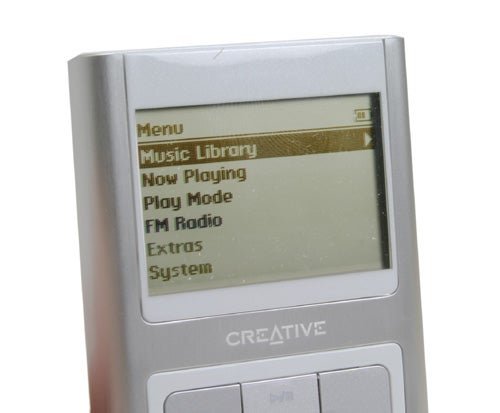 In use, the Sleek, is much like an iPod, only with an up/down strip instead of a wheel, used for menus or for volume while a track is playing. A selection is made by tapping the centre with a Play/Pause button above, a track skip left/right on either side, a back button to go up a menu and the aforementioned context menu button. When you move up and down the screen’s blue backlight comes on and the buttons also light up, aka the third generation iPod.


The power switch is on top, along with a hold button and the microphone. Syncing is done via USB 2.0 via a cable that, like the iPod, is proprietary at the player end. However, unlike the iPod it doesn’t charge over USB; you need to plug in the power plug into the base of cable plug. This is a rather inelegant solution and means more bulk when travelling. Creative claims a battery life of 18 hours, which is great, and a charge time of only two hours. 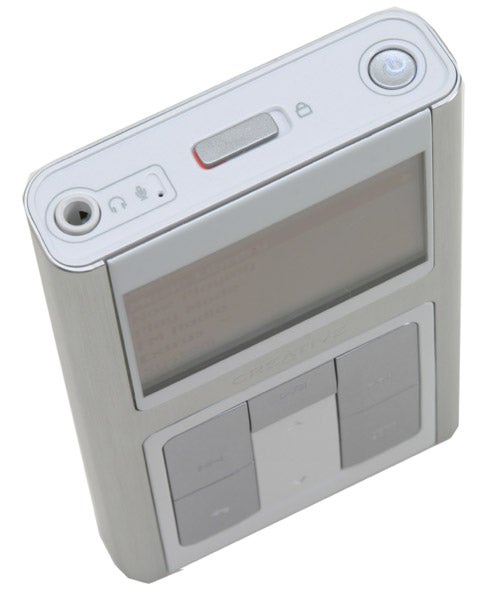 The downfall of many a potentially decent player, such as the Toshiba Gigabeat, is awful software and Creative does it’s best to keep up this fine tradition with its usual bloated array of software. The best thing to do is avoid it and just use Windows Media Player 10. Ok, it’s not a patch on iTunes but at least you can do everything you need to do in one reasonable piece of software, without having to go darting about between several rubbish ones. However, if you want to sync Outlook with the player you’ll need to touch Creative’s Sync Manager application.

Where the ipod has iTunes, the Zen has Napster. To use the Napster-to-Go software you’ll need to upgrade the firmware, which is available on Creative’s web site. Apparently the reason this isn’t Napster-to-Go compatible out-of the-box is becasue this would make it PC only. I can’t envisage any Mac owner buying a Creative player, though I suppose it’s got to have hope.


If you want to use the player as a removable storage device for general data, you can. To do so you have to go into the player and assign a dedicated amount of space to data and then connect the player to the PC when in the ‘Removable Disk’ menu. 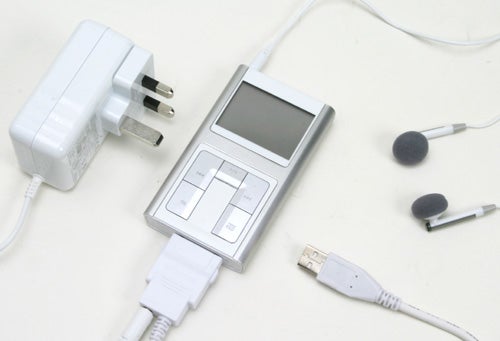 Sound quality wise the Creative is satisfying with a good meaty sound. There are a number of EQ settings and a separate bass boost though this is buried in the menus instead of always available from the context button – an opportunity missed.


So should you buy the Zen Sleek? If you want access to Napster-to-Go, already have a very large collection of WMAs and can’t be bothered to re-encode, or just want a radio with your player, then yes. Despite its title, it’s not as sleek or sexy as an iPod but at least you can take satisfaction you’re not following the crowd.


Not an iPod beater in terms of style or ease of use, but for large hard disk based storage this is a respectable challenger. A colour screen would have been nice and software to truly rival iTunes would have been icing on the cake but this is still a very decent, if unexciting, MP3 player.