Launched last month with precious little fanfare from Creative, the Zen MX is a new entry-level version of what was once the company’s flagship player. I guess you could see it one of two ways: either as a rival to mid-range players like the Samsung YP-Q1 and Sony NWZ-E436F, or as an attempt to eke a little more out of the existing Zen range before Creative launches products based on its much-anticipated Zii processor. The Zen MX pretty much supports both interpretations. 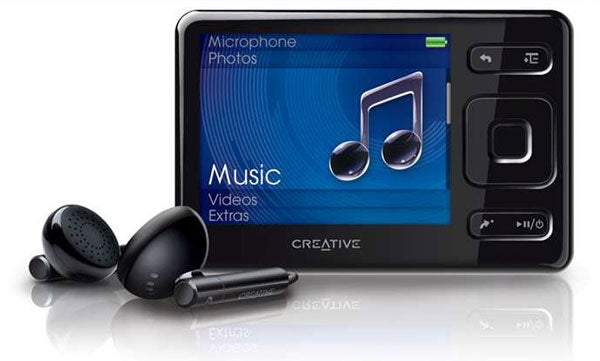 For a start, Creative hasn’t done much – if any – work redesigning the Zen bodywork. As far as I’m able to gather, the two look identical bar two small details. First, there’s no longer an on/lock/unlock switch on the right edge between the mini-USB connector and the headphone socket. These functions have now shifted over to the lower rocker button on the face. Secondly, we get a change of logo on the back of the unit. Otherwise the dimensions (83 x 55 x 12mm) and the weight (66g) are the same, as is the gloss black plastic front, matt black rear and 2.5in screen. Luckily for Creative, the Zen design hasn’t dated at all badly. It might not be as instantly desirable as the Samsung YP-P3, Cowon iAudio S9 or 4G iPod nano, but the Zen MX still looks good.


What’s more, the Zen MX remains, in most key respects, a surprisingly well-equipped little player. There are still very few players out there with any sort of expansion capabilities, yet the MX has a full-sized SD memory card slot that will accommodate SD or SDHC cards, allowing you to easily double the 8GB or 16GB of storage already included in a moment. The screen is also very solid, the 320 x 240 resolution is perfectly ample for the size, and the support for a full 16.7 million colours is still quite impressive nearly two years on from the first Zen’s launch. Viewing angles aren’t great and colours aren’t as bright or vibrant as those on, say, the Samsung YP-Q1, but clarity is up to scratch and you’ll find the display perfectly adequate for short clips, the odd TV programme or viewing photos and slideshows. 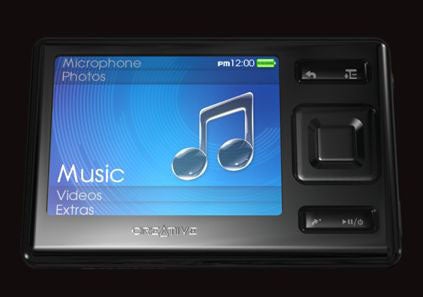 The control layout user interface seems unchanged from the earlier Zen, which means it has its upsides and its downs in terms of usability. The D-Pad isn’t particularly nice to use and the two-way buttons above and below are labelled rather ambiguously, though it doesn’t take long to work out that the top one is back and menu while the bottom one works as the lock/unlock control, a play/pause button and an on/off switch. I actually expected the button in the middle of the D-Pad to do play/pause as well as select tracks or choose menu options, but curiously it doesn’t. Nor does it start and pause recording when you use the voice recorder function, which takes a bit of getting used to.

On the positive side, the various screens and menus are attractive, clear and well laid out, and there are some really nice features. It’s easy to create and save ad-hoc playlists on the move, and there’s also a feature to save and locate bookmarks within longer pieces or Audible book files. Creative’s usual letter-by-letter index feature makes it easy to navigate long lists with a quick right-click of the D-pad, when scrolling through, and my only major complaint would be that you can’t change EQ and Bass Boost functions from within the Now Playing screen; you have to navigate out to the Settings menu and do it there instead.


In terms of functions, the Zen MX is slightly ahead of the most basic players, adding a time/date function with alarm and an organiser with calendar, contacts and task list to the usual FM radio and voice recorder functions, though I suspect most people these days would rather use a mobile phone or smartphone instead of an MP3 player for that sort of thing. The FM radio seems to have decent reception and a working auto-tune feature, while the voice recorder manages to get acceptable audio quality from what is, after all, a tiny built-in microphone. 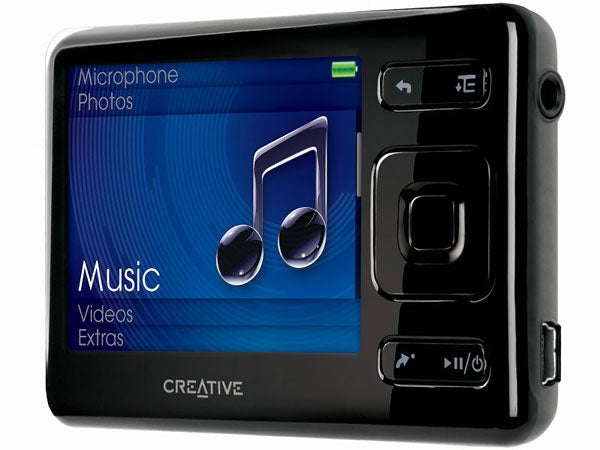 Unfortunately, problems start to creep in when we get to the player’s core functions, most particularly video playback. While the earlier Zen was happy dealing with native WMV and DivX/XviD files, providing the resolution was already set to 320 x 240, the Zen MX will only play files converted to Creative’s proprietary .cmv format. The only way to get it there is through the bundled Creative Centrale software, and to make matters worse this refused to operate on my main machine, though it would on a notebook I keep handy. This is a little irritating, and may put off those who have a sizable library of video files they want to make portable, and no wish to convert them into a proprietary format. I suppose, however, that it’s nothing iPod users won’t be used to. More seriously, it also means that the Zen MX is one of the few PMPs I’ve tried in recent months that won’t playback files downloaded from the BBC’s iPlayer, and that’s becoming a must-have feature these days. Still, once files are converted they play back smoothly, and don’t look bad at all on the Zen MX’s little screen.

There’s better news for music playback – once, that is, you jettison the absolutely wretched bundled buds and plug in something with tolerable levels of clarity and bass response. With a pair of decent in-ear ‘phones or headphones the sound isn’t particularly warm, but it is clear, punchy and really very detailed, with a tight, well-defined low end and a lot of resolution at the top end. With a pair of Grado Sr60is plugged in tracks from Rilo Kiley’s superb Under the Blacklight came through with great sounding vocals, lovely musical basslines and clean, chiming guitars. There’s something really likeable and balanced about the output. Wading Through, from Terence Blanchard’s A Tale of God’s Will, also sounded brilliant, with crisp, sparkling piano, gorgeous sweeping strings and sweet, articulate acoustic bass notes. Accusations, from The Juan Maclean’s The Future Will Come, provided evidence that more synthetic, electronic music isn’t a problem either, and the only weak point I can find is that rock and hard rock tracks, like Mastodon’s Divinations or Pearl Jam’s Deep, don’t sound quite as rich and beefy as they do on other players. All the same, the Zen MX is a strong performer for the cash.

That might just be enough to make up for the player’s deficiencies in other areas. Audio file format support is almost as unimpressive as video file format support, with no facilities to handle OGG Vorbis or FLAC files – a real disappointment on such an expandable little player. Battery life is good for audio playback, at over 30 hours, but poor for video, at just five. Overall, the Zen MX’s fine sound quality and respectable cash/capacity ratio is good enough to keep it in the game against the Samsung and Sony competition, but only just, and it’s a shame that some corners have been cut to hit the aggressive price point. It’s a credit to the Zen that, nearly two years on and in a cut-down form, it’s still a contender for your hard-earned dosh, but I’d take a good look at the YP-Q1 or the NWZ-E436F before pushing my money its way.


The cut-price Zen is let down by a few cut corners, but the design hasn’t dated badly and capacity and sound quality are both very reasonable for the money.