Christmas might seem a long way off yet, but three months is a short time in the technology industry, and we’re already beginning to see the start of a wave of products aimed at grabbing a slice of the festive spend. The last few weeks have seen a whole raft of products launched, after the traditional summer lull, from Internet radios to smartphones and monitors, among which have been a couple of new MP3 players from audio specialist, Creative. 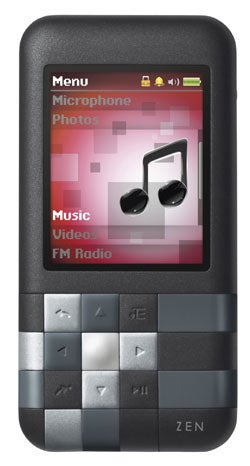 You’d have to be feeling a bit flush to splash out on the Wi-Fi enabled Zen X-Fi for a loved one at in excess of £100, so how about its little brother, the Zen Mozaic? This neat little 2GB player (also available in 4GB, 8GB and 16GB varieties) represents a progression of the Zen Stone range of players, and costs a far more gift-friendly £42. But with the market for good quality, cheap MP3 players becoming more competitive with every month that passes, can it make its mark?


The Zen Mozaic makes video the principal pillar of its claim on your cash. It has a 1.8in 128 x 160 colour screen capable of rendering clips at 25 frames per second and this sets it apart from much of the competition at the price. Yes, you can buy a video-capable player for less than this, but most are terrible players – the Trekstor i.Beat Motion, for instance. Rivals from Sandisk (the Clip), Apple, and Sony can’t offer video at this price. Only the Philips 3225/02 we reviewed recently, with its higher resolution 225 x 176 resolution screen, beats it

But as with the Philips player, it soon becomes clear that video is of limited use on a screen this size. The resolution is even lower than that supported by the Philips, and format support is very limited – the Mozaic will only play back AVI Motion JPEG files at native resolution, ensuring that only the very mad and the very patient will take full advantage of the Mozaic’s video functions.

Including such a screen does have benefits, however, and allows Creative to squeeze a number of interesting extras, some genuinely useful, into the Mozaic. The first is a decent user interface: it’s identical to the one you get on the Zen and Zen X-Fi range of players and it’s a joy to use. Not only does it look nice, but it’s littered with useful features. Browsing a long list of tracks, for example, is a breeze thanks to an A-Z index that runs down the right-hand side of the screen. This allows you to not only scroll up and down track-by-track, but also to quickly skim through by initial letter, from A to B to C and so on. The pop-up context-sensitive menu system works well, allowing you to search by keyword, add tracks to dynamic playlists, and view track details. And the menu system can even be customised, items reordered and removed. It’s a much easier player to use than the Philips 3225/02 and, arguably, the best interface available on any player under £50. 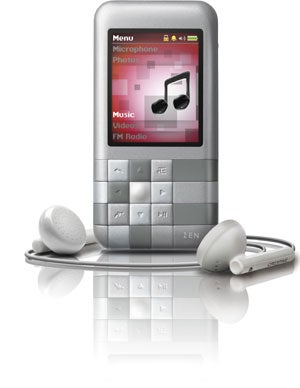 The unusual tiled ‘mosaic’-style control panel works better than you might at first expect as well. Instead of the normal five way directional pad that you usually get on players of this ilk, the Mozaic is equipped with a nine-button pad. The centre button is a select button, as normal, and above and below and to the right and left are directional keys. In the corners are four more controls – back, menu, play/pause and a customisable shortcut key. Again, this makes it a far more pleasant device to use than the Philips.

In addition to the excellent usability, the Mozaic is a very nicely designed device. That black plastic finish, like the Zen Stone Plus, sparkles attractively under lights, and the tiled control panel sets it all off very nicely indeed. It’s small and light, too, and at just 40 x 80 x 13mm, fits in the hand comfortably.

Apart from the limited video capability, there are plenty of other toys to play with here. The Mozaic has an FM tuner with 32 presets, it has a built-in microphone for voice recording, you can display your holiday snaps on it and it also boasts a built-in speaker. The latter isn’t as gimmicky as it sounds. Yes, you can use it to annoy your fellow passengers on public transport, but in conjunction with the Mozaic’s clock/alarm function, you can also use it to wake you up in the morning. It’s worth pointing out, at this stage, that you can also use the Zen as a basic PIM, synchronising it with Outlook appointments, tasks and contacts with the bundled software.

Extra features are all very well, but music playback should be the focus for any device of this type, and happily the Mozaic doesn’t disappoint. Support for file formats runs to MP3, WMA (including DRM), AAC, WAV and Audible formats – impressive, though the omission of FLAC and Apple Lossless support is a touch disappointing.


And sound quality is very good too. As with most Creative music players I’ve listened to over the years, the Mozaic’s sound is balanced and detailed. There’s just enough bass without it becoming overblown, plenty of clear detail at the top end, but it rarely becomes harsh or difficult to listen to. The mids – the most important aspect – are defined, substantial and punchy. 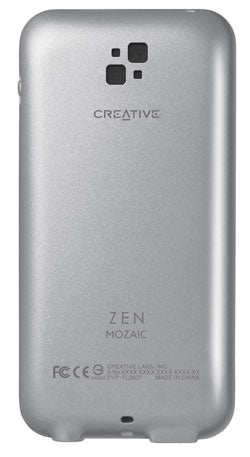 I hooked up my usual reference headphones and kicked off some listening tests with a short burst from Mozart’s Requiem, which revealed admirable control. It’s perhaps not the most exciting and involving sound, but you can hear all the details, without things becoming confused or muddled.


Moving onto a touch of jazz and Lisa Ekdahl’s piercing vocals on Cry Me A River are delivered with acceptable confidence and clarity. The double bass, so easy to get wrong, is substantial but doesn’t drown the rest of the music out, and the piano sparkling and well-defined. For a player costing under £50, there’s really nothing wrong here: it presents a coherent and convincing musical picture, though it’s worth noting you’ll need to replace the rather average bundled earbuds to get the best out of it. 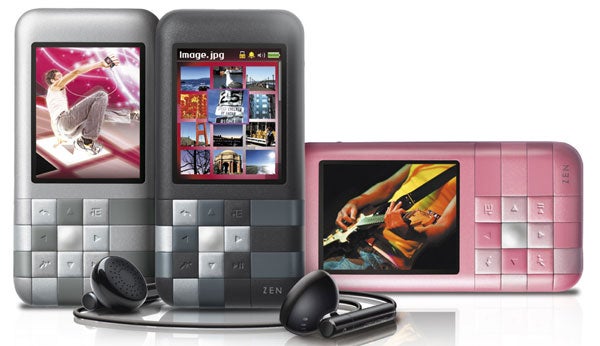 
There’s not much wrong with the Mozaic. Despite the limited video functions, the rest of it is a success: it’s easy to use, looks good, sounds good and is stuffed with useful extra features. But the price for this, at around £46, could be a sticking point.


The main competition, oddly enough, comes from its own stable. The 2GB version of the Creative Zen is available online for around £10 more with the same interface and feature set, but a better screen and memory expansion. If the Mozaic was a little cheaper or had memory expansion we’d have no hesitation in recommending it, but as it is the Zen is marginally the better buy.