At one time Creative’s Vision M digital media player was the envy of all, and the rest of its range of music players was impressive enough to rival even the most prolific of competitors. In recent times, however, things have gone quiet. Only the low-end Zen Stone and Zen Stone Plus have broken the eerie silence in recent months and in the meantime, the Vision M has been quietly taken out of circulation. With Creative now having no mid-range hard disk player to compete with the iPod Classic, and a range that’s badly in need of an update, can the new flash-based Zen begin to claw back lost ground? 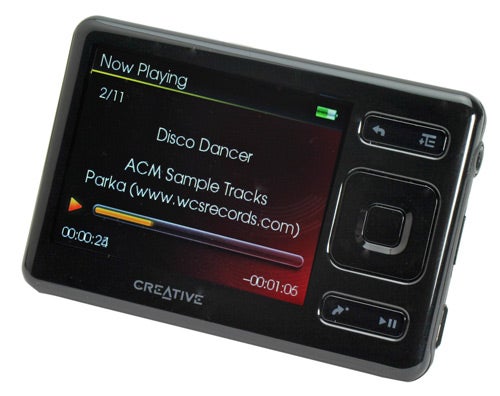 When Riyad first had a play with one back at the beginning of September at IFA, he was pretty impressed and I have to say first impressions at this end are favourable too. The design is unassuming yet smart – completely the opposite to the rather cheap-feeling Stone and hulking great Vision W – with a polished black plastic front and a nicely finished matt black back. It’s not as thin as the iPod nano at a relatively podgy 12mm, or quite as colourful – it only comes in black, but in a funny sort of way that’s not a handicap. It actually feels slightly more comfortable to hold – and less soap-bar-like in the hand. 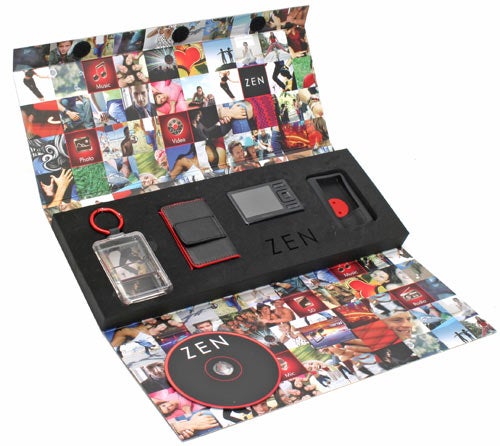 Yet despite its small dimensions, upon closer inspection, the Zen appears to be extremely well-equipped. Its screen, at 2.5in, is not only larger than the nano’s 2in effort, but it’s as big as the larger, hard disk-based iPod Classic. And it’s a very nice screen too. At a full 16.7 million colours – which, as Riyad pointed out in his preview, is impressive for a PC LCD panel let alone one in a tiny media player like this; video looks crisp, clean and vibrant, and the 30fps playback capability means that fast action is smooth and watchable. 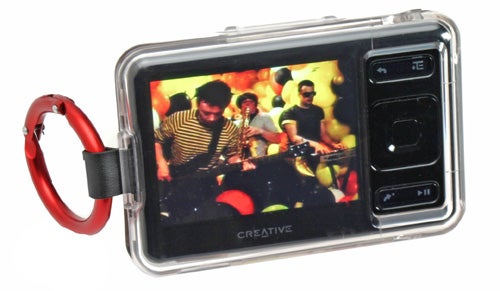 The Zen seems to have pretty good video format support too: it will play DivX 4 and 5, and XviD formats natively, plus WMV9, MJPEG and MPEG4-SP formats. But before you go and get too excited, however, this isn’t as good as it sounds. The Zen isn’t DivX certified, and it won’t downscale videos of higher resolution than its screen, which means you can’t just drop any old file onto it – you’ll still have to re-encode most downloaded videos down to 320 x 240 first. This is made a relatively simple task thanks to the Zen’s excellent management and browser software, which integrates itself into the Windows Explorer tree and lets you convert, sync data, and transfer music and video without having to fire up a separate application, but it’s still an unnecessary hassle. That said, it’s no different to the nano in this respect.

The Zen betters the iPod nano in other ways too. First, it’s available in larger capacities. I was sent the 4GB version to review, but it also comes in 8GB and 16GB capacities – the nano stops at 8GB, where the much larger Touch takes over – and there’s an SD card expansion slot too, so in theory you could take the memory complement up to an impressive 12GB, which is the same as some lower capacity hard disk-based players. 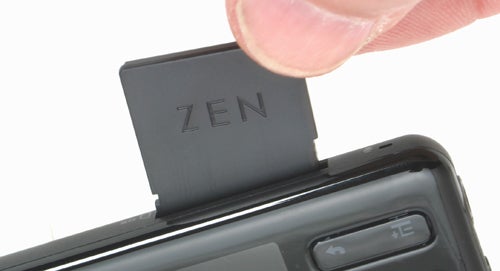 Other reasons to buy the Zen before the nano include an FM tuner, the ability to charge and transfer files with a standard USB to mini-USB cable rather than a proprietary one, and the fact that you’re not tied to iTunes for file transfer and device management. You can use the bundled Creative Media Explorer or Windows Media Player if you want to listen to DRM tracks; or any other music management software you care to mention if you’ve been sensible enough to simply buy CDs and rip them yourself. You can also simply drag and drop files to the player if you wish – it’ll even warn you if the files you’re attempting to copy aren’t supported by the Zen as you do so. 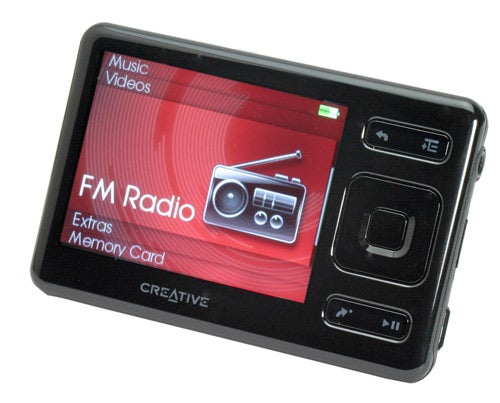 Battery life is slightly better than the nano’s as well, at a quoted 25 hours for audio and five hours for video, though note you’ll only get the former if you play 128kbps MP3s continuously with no track skipping or other navigation. There’s no search function, however, which is one of the few advantages the nano holds over the Zen.

Once you’ve got your music and video onto the Zen, navigating through the attractive-looking menu system is very straightforward. The four way d-pad isn’t as nice to use as the nano’s click wheel, and the rest of the buttons’ aren’t instantly intuitive either thanks to the fact they have rather ambiguous symbols on them. However, after a short while you’ll be flicking around from screen to screen and creating playlists on the fly without a second thought. One excellent feature common to this and other Creative players is index navigation: click right on the device’s d-pad and you can then navigate by initial letter. This makes it a snip to navigate long lists quickly. Another nice touch is the Album of the Day feature which, on a click, chooses a random selection of tracks from a random album and plays them. It’s an excellent idea and a good feature for in-pocket operation, allowing a quick change of theme without the need to look at the screen.

So how does the Zen fare when it comes to audio quality? It doesn’t make a good start, with disappointingly restricted file format support. Despite the fact that the player supports non-DRM AAC on top of the usual WMA and MP3 formats, there’s no support lossless codecs or OGG Vorbis.


The lack of audiophile options is a disappointment, not merely from a features point of view, but because the Zen is a good enough player in terms of its output to take full advantage of the increased quality. To test it, I hooked up my high-end Grado SR325i reference headphones – if these can’t reveal the weaknesses in a source nothing will – and discovered that the Zen is a highly capable player. 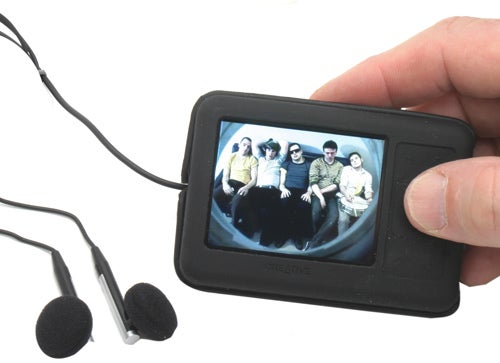 The first thing to point out is that it doesn’t have the loudest volume output in the world. It’s fine if you listen with in-ear noise isolation headphones, but some people just don’t get on with sticking things in their ears and it won’t drive larger headphones to the same levels as, say, the Trekstor Vibez player I reviewed a couple of months back. 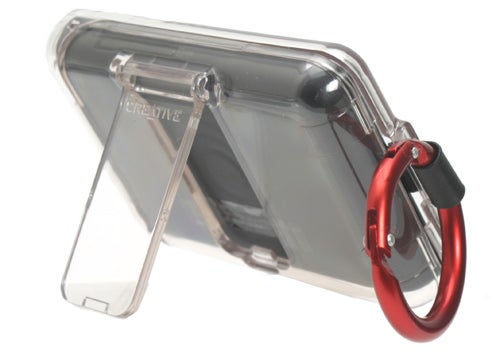 However, this was soon forgotten as I started to listen to a few sample tracks. Creative players have always been pretty good-sounding machines and the Zen continues this tradition. In back-to-back tests against the Trekstor Vibez, which I’m using as my reference player at the moment, I found the Zen to be just as good, but in different ways. Listening to a spot of dinner jazz from Swedish songstress Lisa Ekdahl, the Zen doesn’t quite have the same open airiness of the Vibez. But the rest of the sound spectrum is cleaner and just a little bit smoother, with plucked double bass notes in the background more satisfying to the ear. 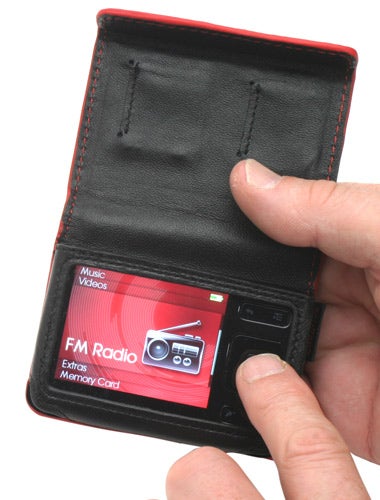 This strength comes to the fore when listening to something a little less civilised. Biffy Clyro’s ”Puzzle” is a current favourite of mine and the Ayrshire outfit’s brand of unorthodox guitar rock comes off with an energy, vigour and punch on the Zen that many other players lack. Its dynamism and clean, tight bass is simply excellent and a notch in front of even the excellent Trekstor Vibez.

Next I fed the Zen with a couple of tracks from a new band I’ve discovered. Sowena plays an intriguing blend of acoustic guitars and reggae beats and its well-produced and recorded music is the perfect test of the Zen’s capabilities. It excelled here to, jangling out the music with gay abandon.

Finally, I fed the Zen my usual selection of demanding classical works, from Mozart’s ”Requiem” to the dramatic opening to Mahler’s ”5th Symphony”. And it coped here just as well, dispatching complex choral refrains and the huge dynamics of orchestral strikes with realism, impact and subtlety. 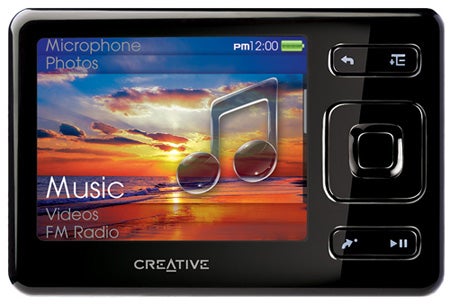 So, all-in-all, a rather impressive performance. It’s a little disappointing that you can’t drop video files with higher resolutions than the player’s screen, and I’d like to have seen support for lossless codecs too, but the player’s big, clean sound makes up for this and then some. If you’re looking for an alternative to the iPod nano this alone should put the Zen at the top of your shortlist, and makes it well worth its recommended award.


Creative has come up trumps with its new, flash-based, mini media player. Pitched as a direct competitor to the iPod nano it beats it on most fronts with the one exception being that its physical controls aren’t quite as nice to use. It comes in a greater range of capacities, has a larger screen and, importantly, isn’t tied to iTunes or a proprietary cable for syncing and charging. It comes in at roughly the same price too, the 4GB version selling for just under £100.