Creative has for a long time churned out decent quality PC speakers, from stereo setups right the through to 8-channel surround models. Most recently it’s been the company’s stereo desktop sets that have really caught our eye with the T20, T40 and HD50 sets all getting scores of 8/10 or higher. In this modern digital age, it’s no longer enough simply to have great sounding speakers, though, now they must be wireless! Duly Creative has obliged, creating these, the Creative T12 Wireless Bluetooth speakers. 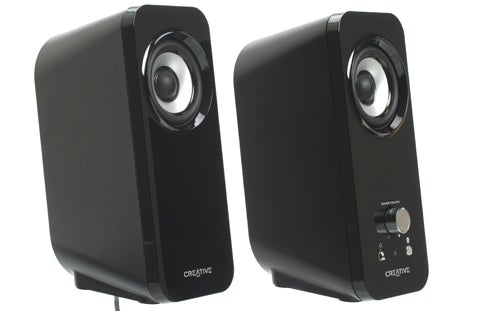 Smaller than their award winning cousins, the T20s, the T12s sit just 180mm high, 71mm wide and 98mm deep. As such they should fit comfortably on even the most modest of desk arrangements.


While wireless power is becoming more prevalent for charging phones and such like, it hasn’t quite reached the realms of speakers yet so you still have to connect these speakers to the mains, as well as the left speaker to the right speaker, via old fashioned cable – there’s no battery option either, in case you were wondering. The power brick itself is incorporated into the plug and is a fairly small, lightweight unit so you could just about conceive of taking these speakers in a suit case when travelling, though we wouldn’t be overly inclined to. 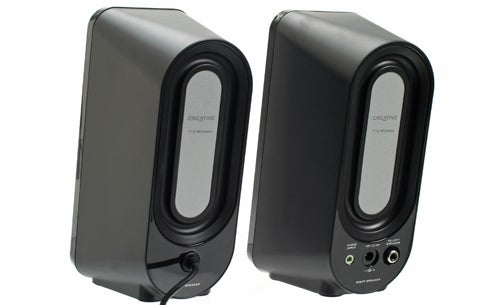 The design of the speakers is just about as classic as it gets, at least when it comes to aesthetics. Sure they’re no Bowers & Wilkins MM-1s but then they do cost an eighth as much. Built from sturdy plastic, they’re finished in an attractive glossy black with a silver volume/power knob on the right speaker below which sit a headphone jack, a power/wireless connection indicator LED, and the Bluetooth sync button. The dial is solidly planted and provides a smooth level of rotation, though we do wish there were an illuminated or brightly coloured dot to signify the volume level, as it can be difficult to tell what setting you’ve got these at when hidden behind a computer screen. 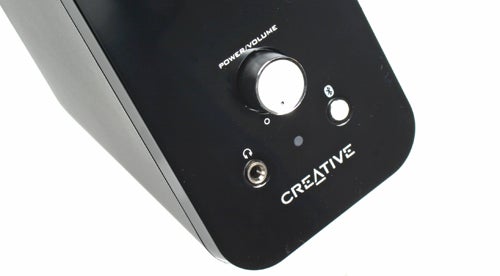 Where the T12s break from the design norm is with the arrangement of the speaker cones. Rather than a tweeter and woofer, one atop the other, with a bass port on the back or top, there is a tweeter on the front and a woofer that fills the entire of the back. We’re sure this can’t be good for sound quality, as in theory the two drivers will interfere with each other causing distortion. Audiophile level, then, these certainly are not but then you wouldn’t expect as much for £60.


Also to be found on the back is an auxiliary input for hooking up a conventional sound source.

The wireless portion of the equation comes courtesy an inbuilt Bluetooth receiver. Just set the speakers into pairing mode, by pressing the button on the front, then any Bluetooth device – laptop, mobile phone, mp3 player – will be able to stream music to them using the A2DP standard. If you don’t have Bluetooth built into your PC, fear not, as you can simply buy a USB Bluetooth adapter, like Creative’s own D1 that can be had for £29 or so. Just plug it in, install the driver, sync with the speakers (the password’s the standard Bluetooth one of 0000), select them as your default audio output and away you go (turn the speakers off and the connection is lost, reverting your PC back to its alternative sound output until you turn the speakers back on).

Now you can wander round the house/room streaming music from your phone or sit down with your laptop and you’re free from the burden of connecting up any cables: it just works. Take your laptop out of range of the speakers and it will simply revert back to using the inbuilt speakers. 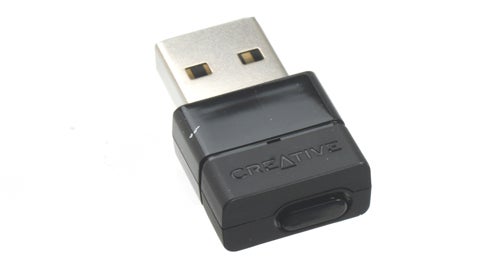 All told, it’s really simple to setup, and once done so it’s a surprisingly liberating thing to be able to move around untethered. Of course, for this very reason, it’s a rather pointless thing to buy if you have a desktop PC or seldom move your laptop away from your desk.


Wireless or not, what the T12s must of course do is create great sounding audio and for the most part, that’s precisely what they do. As already noted, they don’t deliver audiophile levels of clarity with a slightly muffled, flat presentation. Conversely, bass is clearly given a boost so there’s a substantial thump to kick drums and rumble to bass lines. 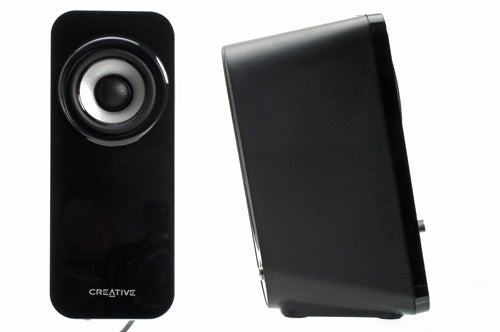 The result is that most genres of music are enjoyable to listen to: you’re never left wanting for warmth, depth and bass while the top end never gets harsh. So no matter if you’re after the floor pounding beats of Prodigy, the head banging brutality of Metallica, the subtlety of Mozart, the groove of Bob Marley, or the sheer skank of The Specials, these should give you something that’s a satisfying listen. Pushing up the volume, things do get a bit muddy when the bass is being driven hard but you’re talking volume levels that far exceed anything you’d be using in a normal desktop environment before this happens to any detrimental effect. Certainly, for the price, we couldn’t complain.


Comparing to Creative’s own T20s, the GigaWorks set definitely have better clarity and maintain their balance much better when the volume is pumped up. However, right across the volume range, they lack the bass kick of the T12s, so it really depends what you prioritise. For fans of subtler genres like classical, jazz and folk, you’ll probably find the T12s a bit lacking in clarity but those who prefer their music to be a bit bombastic then they will more than suffice. 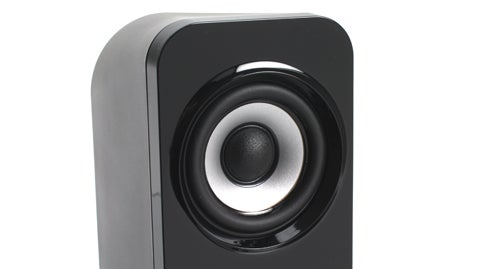 Comparing to other Bluetooth solutions, there aren’t all that many that have this separate stereo format, with most being ipod dock-style speaker bars, such as the Creative ZiiSound D5 and few of these lend themselves as well to a desktop computer setting, nor can we think of any that offer as satisfying audio at such a reasonable price.


If you want to stream music from your phone or laptop to your speakers without the need for wires, these Creative T12s do the job admirably. They’re easy to setup and provide a nice rounded sound that suits most genres. They’re not the most practical if you want a portable solution, nor are they as elegant as the all-in-one speaker bars, but for having setup on a desk, ready for your laptop or desktop PC, they are a great buy.