While the SXFI holographic audio would benefit from greater refinement, for gamers or those who regularly watch movies wearing headphones, the SXFI Theater are a solid pair of cans offering a robust wireless performance

The Creative SXFI Theater are over-ear headphones with holographic audio support and a low-latency wireless connection.

The SXFI Theater are marketed at film and gaming fans, and for £189.99 you get immersive sound and low-latency wireless performance for a lag-free experience.

Is it the kind of experience that makes you want to do away with a home cinema system? Dim the lights and get that popcorn ready; it’s time to find out.

The SXFI Theater and SXFI Air are nigh-on identical in terms of design, with only a few changes to distinguish one from the other. The first is an aesthetic one, with the words SXFI Theater emblazoned on the outer-ear cup and buffed with an embossed finish. The second sees the breathable memory foam fabric of the SXFI AIR’s earpads swapped for soft protein leather. This a positive change, as the memory foam often led to itchy moments. 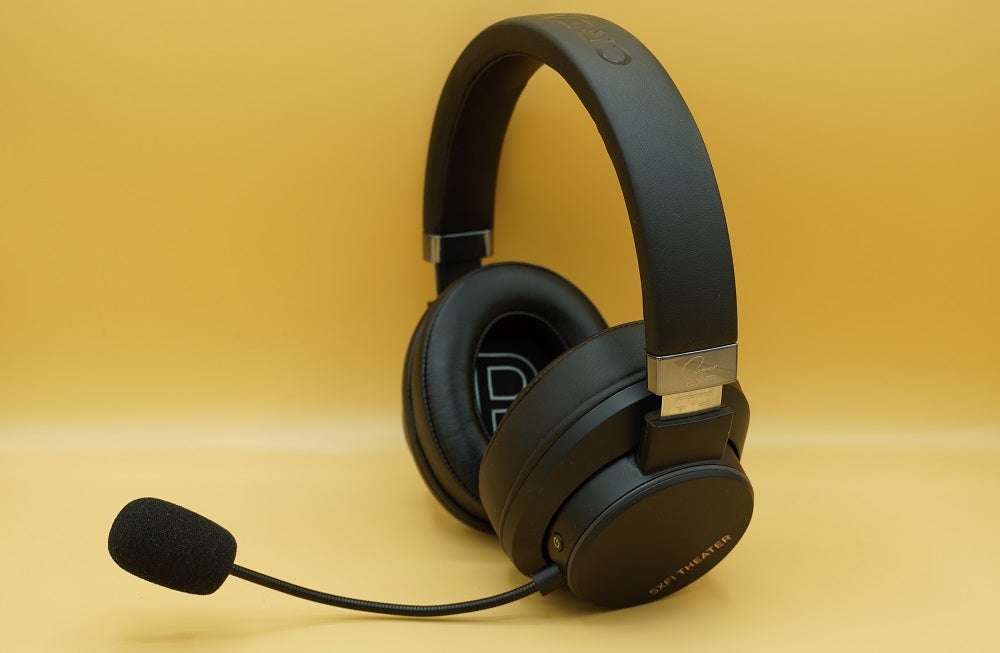 These headphones are just as bulky and weigh around the same – that’s 346g with the detachable gaming mic and 339g without. The size and bulk is less of an issue here than with the SXFI Air since the Theater are meant for home use.

The fit is still loose, but that provides some slack to adjust the fit. The headband remains the weakest part of the design, however. There’s barely any padding, which causes some chafing, and the headphones’ adjuster can slip and slide too easily when grabbed. 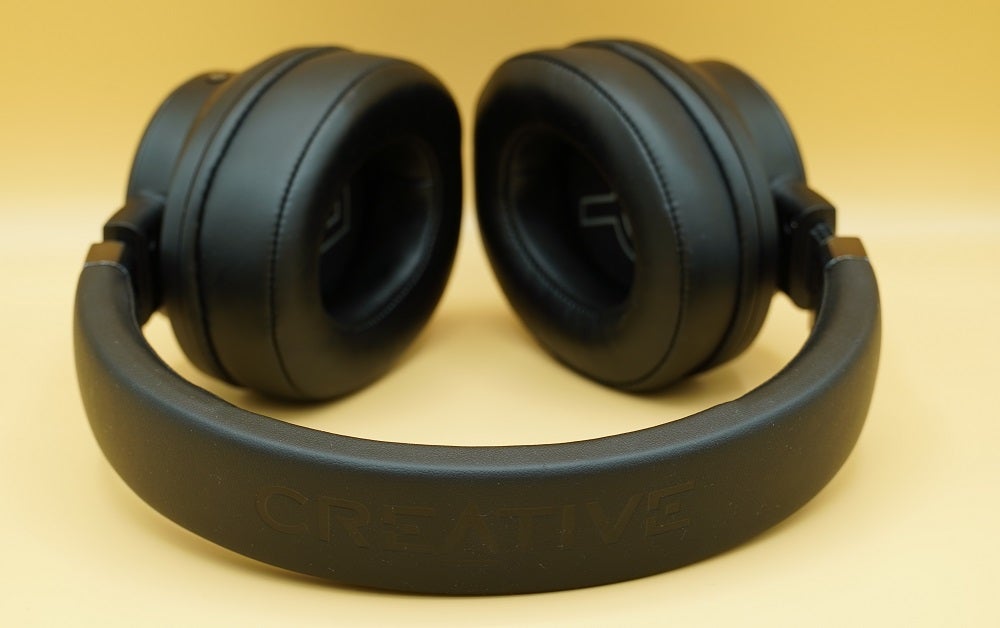 There’s no active noise cancellation, but the size of the pads offers enough isolation to inhibit sounds from intruding on what you’re doing.

While at the time of review, I felt the SXFI Air were a nice-looking pair of headphones, I now find them rather plain – and I feel the same about the SXFI Theater. Creative hasn’t done anything here to make you excited about wearing them, or to make them visually interesting. And apart from black, they don’t come in any other colour options.

The lack of colour options doesn’t mean they lack flash since the RGB colour ring makes a return. It’s located on the outer ear cup, and changes colour depending on use and can be customised with 16 million different options via the SXFI Control app. While it adds a degree of personalisation and makes the SFXI Theater a bit funky, you won’t be privy to the light show when using them. At least it makes more sense than placing light sensors inside the ear cups, like Beyerdynamic did with the Lagoon ANC. 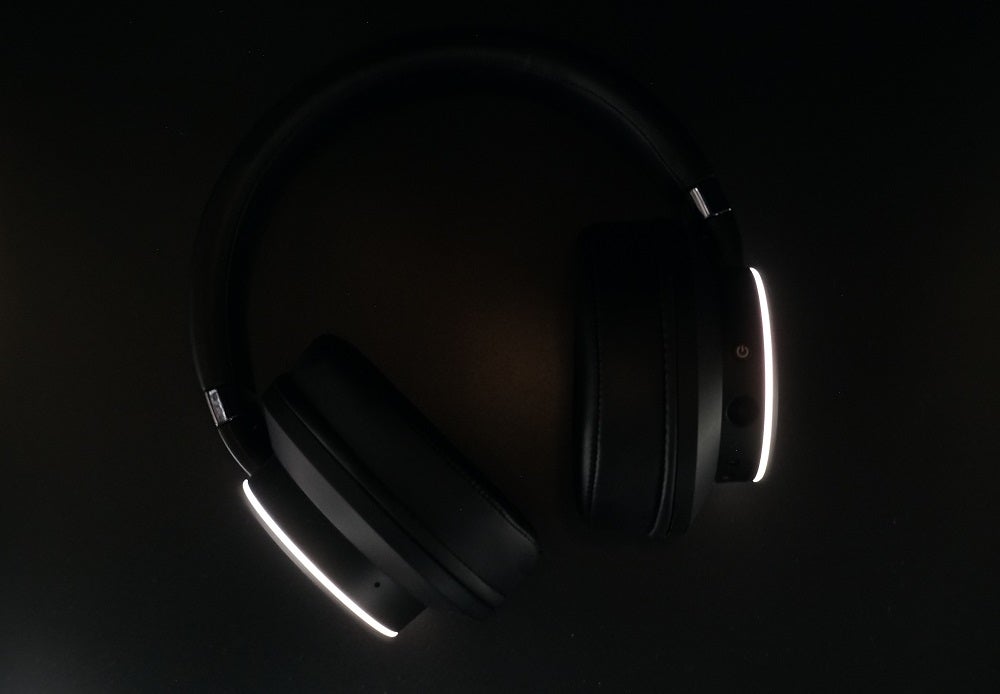 The left earcup is where you’ll find the buttons, with a few changes from the SXFI Air’s layout. There’s a volume dial (new), and out goes the Source button to be replaced by a mute button, in case your focus is required elsewhere. There is, of course, the Super X-FI mode, which turns stereo audio into 3D. These add up to a fair number of inputs on one earcup, and this did cause a few fumbles as I tried to remember the placement. Connections include a 3.5mm jack for passive mode, a USB-C connection and the detachable mic. 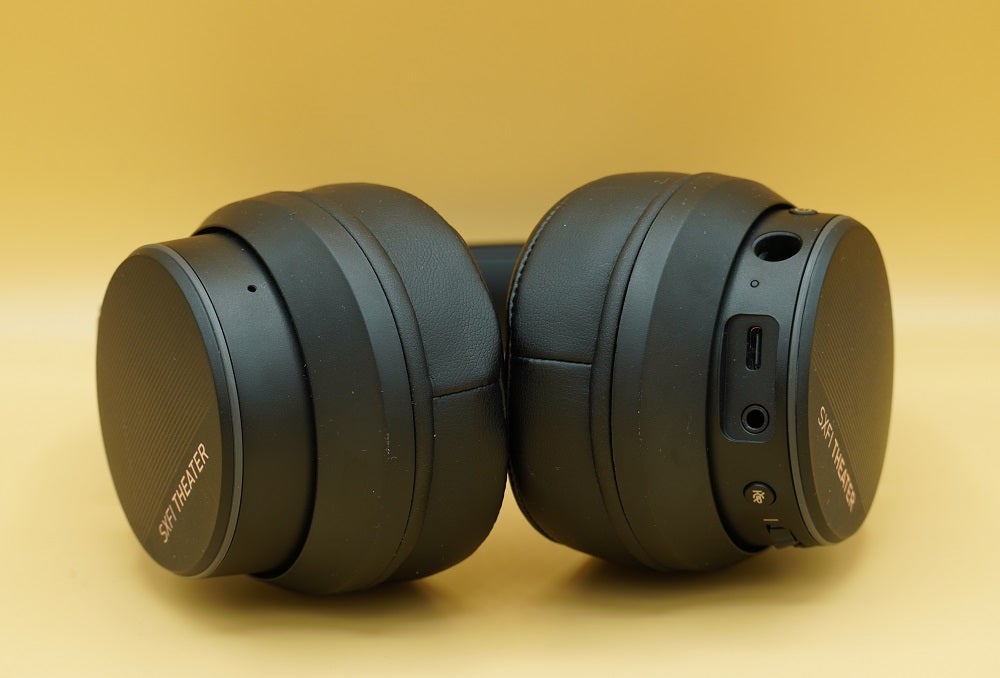 Battery life has been tripled to 30 hours, which should see you through a few weeks of gaming sessions and films. Creative also includes a USB-C cable for charging.

The Super X-FI requires pictures of your head to create custom audio personalisation. The app guides you through the process – it’s best to have someone else take the pictures – and for your patience, you get a 3D experience tailored to size and position of your ears.

The newest feature is Theater’s low-latency wireless connection. Rather than use Bluetooth, Creative has crafted its own SXFI TX: a wireless USB dongle that features the company’s proprietary digital audio transmission tech. 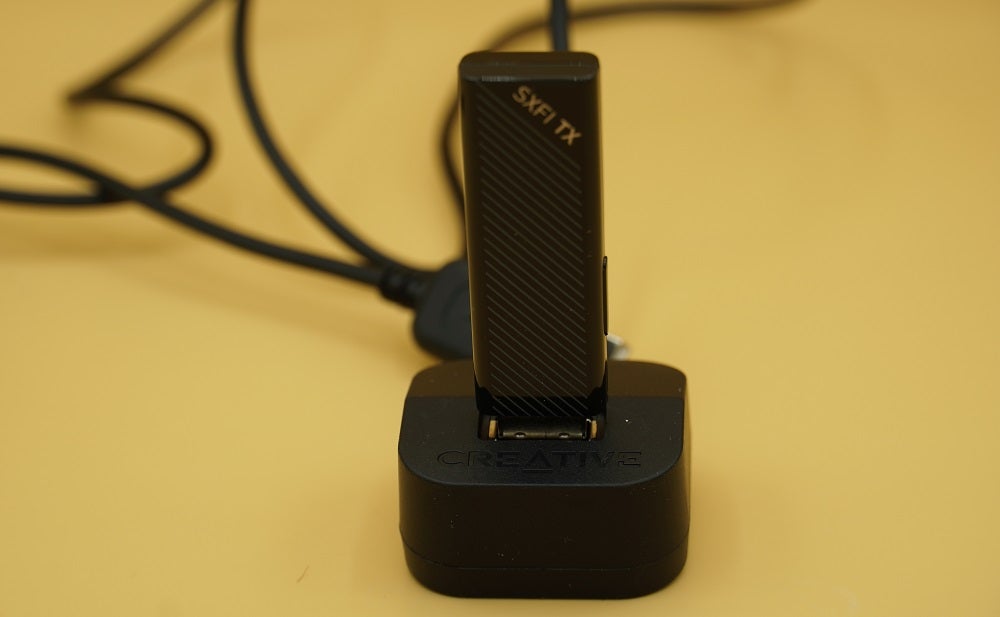 Creative says the SXFI TX offers a smoother wireless connection, and it works with PC, Mac, PS4 and Nintendo Switch – but it isn’t functional with Xbox, which may be a negative for those with that console. Packed in the box is a separate 1.2m USB Extension dock to extend the SXFI Theater’s wireless range.

With all the acronyms and features, it’s easy to forget that the SXFI Theater can be pretty decent sounding headphones. They don’t offer the performance to trouble the likes of a Sennheiser or a Sony, but they’re serviceable enough if your expectations aren’t too high.

The Theater’s presentation is big and spacious when used in passive mode, with a sound that’s clean, uncluttered and somewhat neutral in its goal, all the while offering decent detail and clarity. Dynamics don’t register as much as they could, and despite the use of 50mm drivers, the bass performance feels slightly tubby rather than punchy. 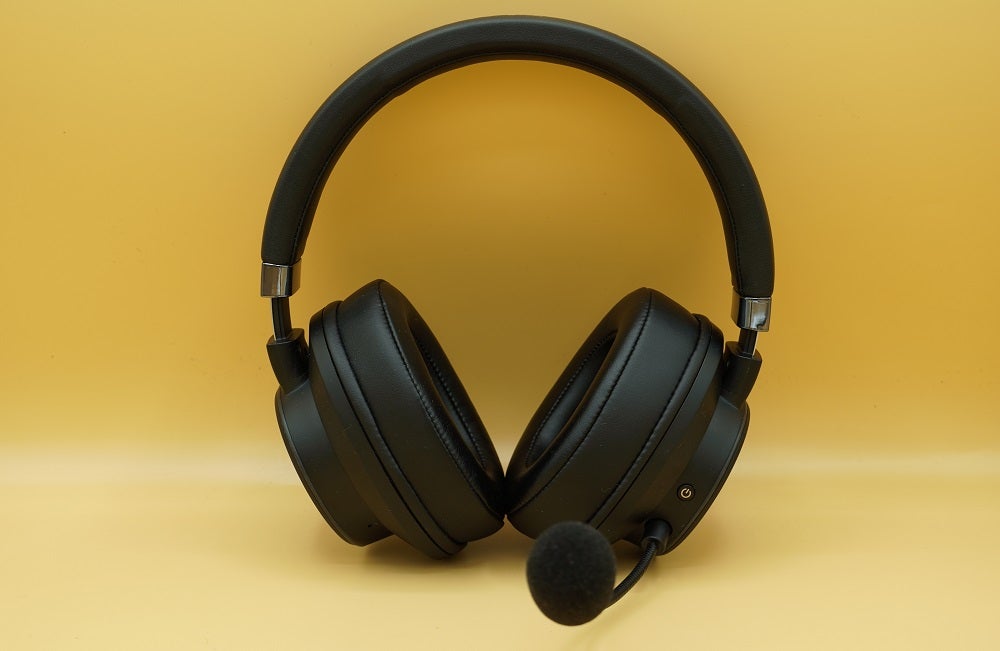 Feedback from others suggests mic quality can be variable. While people on the other side of the line have told me they can hear what I’m saying, the volume of the mic appears to vary from okay to low. If this is an issue, the volume of the mic can be boosted on the PS4 if you jump into the audio settings. Having done this, feedback was more positive. I haven’t experienced any issues with low-latency connection. It’s been consistently strong, with not even the slightest hint of an audio dropout.

When it comes to the SXFI tech, I’m still unsure whether it’s quite the step forward Creative believes it to be. It has its benefits, as revealed by a play of God of War on the PS4. The game’s audio track is aided by the expansion of the sound field and a more directional performance, with greater depth and height than is possible from a more traditional listening experience. 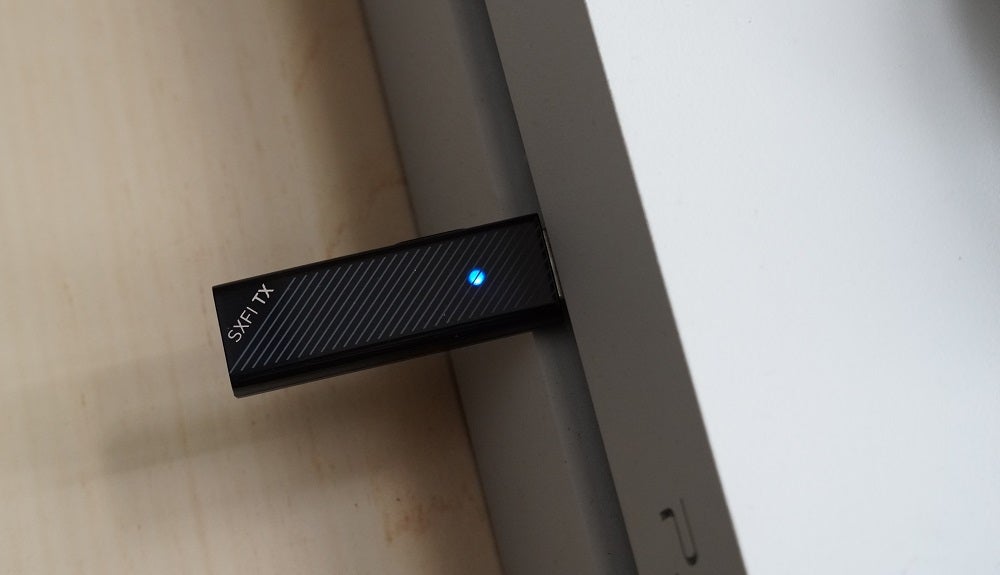 But it still sounds artificial to my ears, lacking clarity, detail and sharpness. It’s meant to give this sensation of sounds moving around you – and in some ways it achieves this. Instead of hearing a waterfall perpendicular to your left ear, you can sense its placement higher up; but more than anything, it’s the texture of sounds that are off. I feel in the process of upmixing to 3D audio, the SXFIs lose some fidelity.

I’m more positive about the SXFI experience when watching films on a PC. First you need to download the Super X-FI Control app to your PC or Mac, log in, and it will automatically sync your personalised Head Map data and upload it to the headphones. 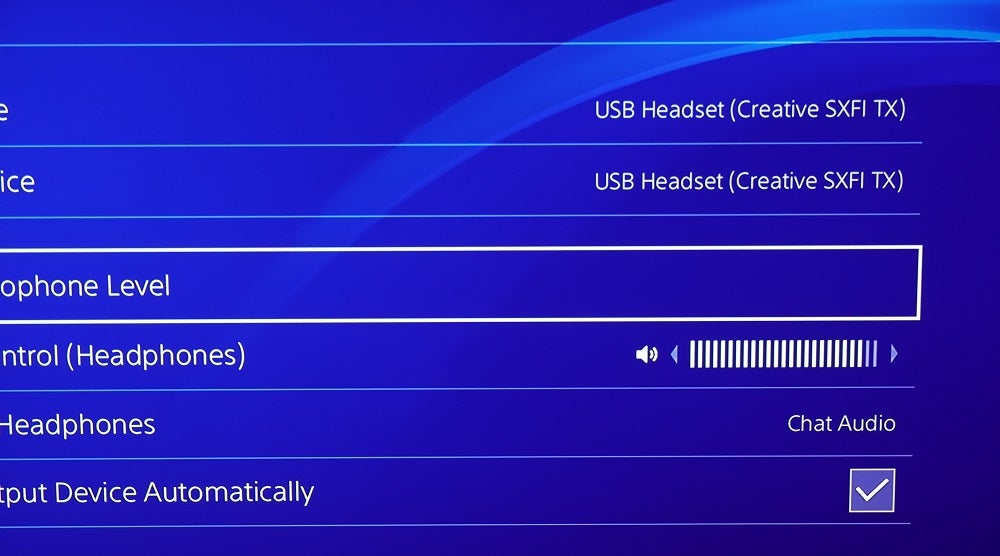 A spin of Master and Commander: The Far Side of the World on Blu-ray and the first battle scene packs a punch. While I wouldn’t say the sounds of the cannonballs were whizzing and whooshing past my ears, they were more raucous as the HMS Surprise cracks and buckles under the cannon barrage. It felt more visceral while still retaining detail and clarity of the track.

There’s greater clarity to voices when listened to conventionally, but the benefit of SXFI is the expansive soundstage to which you’re treated. The SXFI boost isn’t intelligent enough to place sounds where they should be with precision, which is the reason I could hear the sound of the sea above my ears, rather than below.

You should buy the Creative SXFI Theater if…

Films, games, music, these headset works with them all and in that sense provides pretty good value.

Unless you’re playing games for days at a time, the 30 hour playtime should be enough for a couple of weeks.

You shouldn’t buy the Creative SXFI Theater if…

We’re not sure holographic audio supersedes a standard, stereo experience with every piece of content you watch, listen to or play. It works on some occasions, but even then, a more conventional experience is better.

The headband is not the most comfortable and after long gaming sessions we could feel it chafing against our head.

The Wi-Fi dongle won’t work with Xbox consoles, and that means game over.