Creative may now dominate the sound card market with even competitors like Auzentech using its technology, but thankfully the company still has its eye on innovation. While most sound cards are designed to be fitted in older, slower PCI slots, the Fatal1ty Pro uses the company’s latest EMU20K2 chip which has been tweaked to add native PCI Express support. As a result it will happily sit in a x1, x4 or x16 PCI-E slot, meaning that it’ll still be useable in the future, long after the slower PCI bus has gone the way of the dodo. 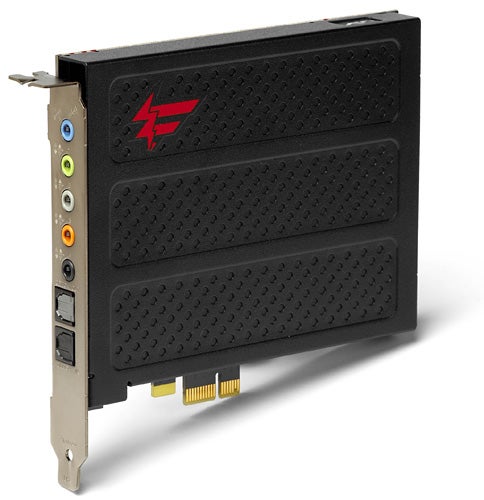 When you take the Fatal1ty Pro out of the box you’ll notice that it looks quite different to your run-of-the-mill sound card. This is down to the large black shielding jacket that covers the main circuit board and helps shield it from other cards and noisy components inside your computer. The only other visual tweak is a small X-Fi logo which is backed by a white LED so it glows when your computer is turned on. Naturally, this serves no purpose other than to make you feel smug about owning a top-of-the-range card.

That said, the Fatal1ty Pro is not exactly overflowing with inputs and outputs. It supports 7.1 analogue output via four mini jack sockets, with the first doubling as a headphone jack. Sitting next to these you’ll find the stereo microphone socket and the optical digital input and output ports. On the circuit board there’s also a standard front-panel connector so if you computer’s case has front-mounted headphone and mic jacks they can be hooked up to the card.


Creative has become known for its software bloat and this card is no different. On the install disc you’ll find lots of unnecessary applications including Creative’s iffy MediaSource manager. Bizarrely some of the essential stuff, like PowerDVD, has to be downloaded from the web and you also have to register the card online to unlock one of it’s key features, the ability to encode a live surround sound stream into Dolby Digital.

As with all the other X-Fi cards, the Fatal1ty Pro is switchable between three modes: games, entertainment and content creation. Not really switching modes as such; just controls in software where the card assigns the bulk of its processing power.


Entertainment mode turns on the card’s support for Dolby Digital EX and DTS surround sound in movies. It also enables the Crystallizer and CMSS 3D effects. The former aims to pump a bit of life back into tracks that have become a tad flat after being compressed using formats like MP3 and WMA. It does a surprisingly good job and doesn’t wear on your ears like some of the other audio exciters we’ve used on rival cards. The CMSS 3D, on the other hand, is designed to widen and thicken music and movie soundtracks. It works OK with headphones, but the results when its upmixing music to output over surround sound speakers can be a bit hit and miss. 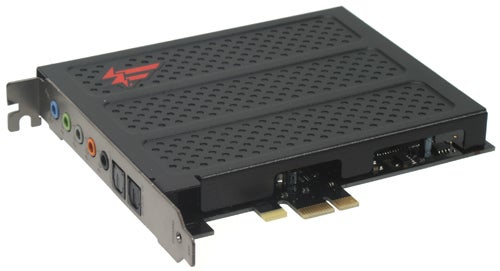 The content creation mode turns on the card’s ASIO (Audio Stream Input/Output) drivers, which allow you to individually address the outputs in programs such as Reason and Cubase. It also tweaks the hardware for low latency performance (so there’s little or no lag between pressing play in your music app and hearing the results spew out of the card) with the card capable of an ASIO latency of just 2ms.


However, most people who buy this card will be purchasing it for its gaming prowess, so the gaming mode is where the action really lies. Luckily the Fatal1ty Pro continues Creative’s tradition of excellent support for gaming surround sound formats. Naturally there’s comprehensive support for the company’s own EAX 5.0 HD format alongside OpenAL. The card also has 64MB of speedy X-Ram which can be used by compatible games (such as Quake 4, Battlefield 2 and Unreal Tournament 3) to pre-load sounds so that precious processor cycles aren’t wasted shifting audio from your PC’s memory to the card during game play. 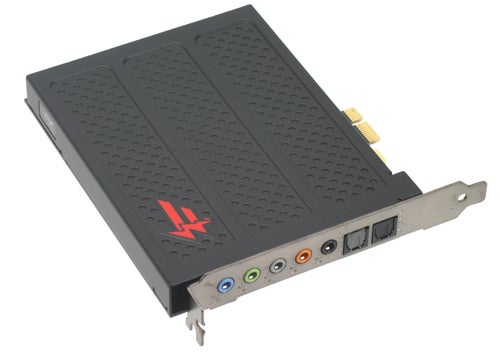 The Fatal1ty also has another trump card to play when it comes to gaming. As well as being able to feed a set of surround sound speakers via its analogue outputs, it can also encode gaming surround sound on the fly into Dolby Digital Live and shoot it out of its digital audio output to a surround sound decoder. The advantage of this is that you can connect the card to a speaker setup using a single optical cable, rather than having to use lots of analogue ones and ending up with the inevitable bird’s nest of wires.

So the Fatal1ty Pro’s design and features are all well and good, but how does the card actually sound? In titles like Crysis and Bioshock the Fatal1ty Pro is a really mesmerising performer. It produces very precisely positioned surround sound effects that really add to the tension during game play. Shots reverberate around rooms in a realistic fashion and you can really hear the difference in echoes and reflections as you move between different rooms and structures.

Using the loop back test in RightMark Audio Analyzer on an Acer Aspire M3200 desktop, we measured its noise level at 101.8db, which is excellent, so it’s hardly surprising that it sounds wonderfully lively and natural for music and recording, while also doing an excellent job of positioning surround sound audio in film soundtracks. In fact, it’s pretty difficult to find fault with the card at all and in terms of performance we’d say that it’s the best out there for a dedicated gaming rig. 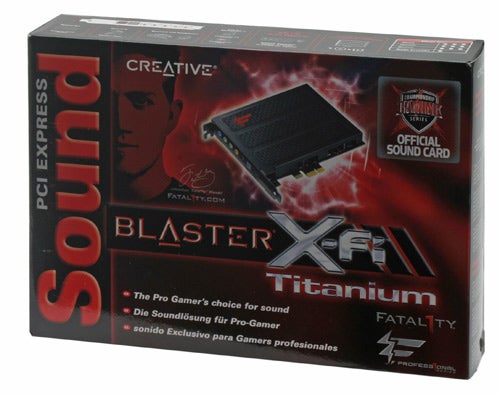 
There’s no doubt that the Fatal1ty Pro is a top-class performer. Its support for EAX 5.0 HD and OpenAL is exemplary, as is its performance with music and film sound tracks. However, it is a tad expensive and has relatively limited connectivity which narrows its appeal somewhat. Still, if you’re into gaming and want the best card on the market at the moment, then we can heartily recommend it.