Aside from rubbish graphics cards, the thing that most often gets neglected on notebooks is the quality of the sound card. One might argue that there’s good reason for this, since integrated sound-chips have reached a level of audio performance that’s certainly acceptable to most users. Many notebooks these days even offer digital audio out, with the headphone socket doubling as S/PDIF.


But for some users, this just isn’t good enough, and even the ‘sound cards’ built into many USB headsets don’t improve things much – for one thing, any discerning audiophile is likely to own a pair of high-end 3.5mm-jack headphones already. This brings us to the Creative Sound Blaster X-Fi Notebook under review today.


To readers who’ve been with us a while this might sound very familiar and it should, since we reviewed the similarly-named Creative Sound Blaster X-Fi Xtreme Notebook in 2007. However, what we have before us today is a very different item, both in terms of styling and technology.


Style-wise, black has thankfully replaced silver. Colour preferences aside, we’d wager that black is less likely to clash with most laptop exteriors. This iteration now features rounded edges, as well as a glossy section sporting power and connectivity indicators, while the sides and bottom of the unit bear a sensible matte finish. Overall it simply looks a little more polished. 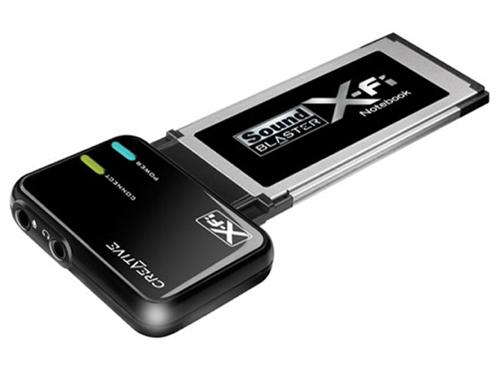 As the lack of the ‘Xtreme’ part in the name suggests, this product is in some ways inferior to its older relative which is still available to buy. It no longer features optical audio connectivity, for example, nor will it provide true 7.1 surround sound.


But what features it lacks, it adds more in other areas. Primary among its unqiue features is the capacity to send a wireless signal to other Creative products such as the Wireless Receiver, which of course is a more elegant solution than having to plug a cable into your notebook, though it does require an additional purchase. Indeed, you can use several wireless receivers to send audio to different locations, though at £60 per receiver it’s no trivial expense.


Another major differentiator with the Xtreme is that the card has now been reduced in size to fit the 34mm ExpressCard slot, giving it a far broader range of compatibility. For 54mm ExpressCard laptops, a strong plastic clip-on adapter is provided, and in either case the card seats itself solidly.

Since the X-Fi Notebook extends quite far out when inserted, leaving it in your laptop while on the move is unlikely to be convenient, so Creative has provided a small faux-leather carrying pouch. It’s a very nice touch, well-made, with a soft inner lining and a magnetic flap.


Also included is what at first glance appears to be a rather cheap set of earphones with microphone. Bundling low-end earphones with a supposedly high-end soundcard seems somewhat incongruous, but they actually sound a lot better than they look.


Despite their small size and light weight, which together with foam covers makes them comfortable to wear, their performance is superior to most bundled or even low-end retail sets. Moreover, the in-line microphone is a miniature marvel, doing a surprisingly good job of picking up speech in a noisy environment. 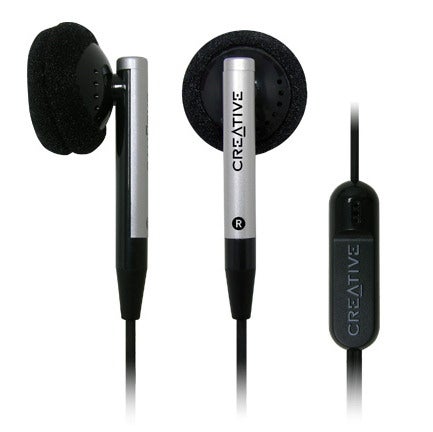 Installation of the card is simple: just plug it in, install the driver and you’re ready to go. It’s worth noting that in addition to Windows XP and Vista, the driver also offers beta support for Windows 7, though unfortunately OSX or Linux users are out of luck.


Once inserted, the Sound Blaster X-Fi Notebook has a blue power LED that remains constant. There’s also a backlit ‘connect’ button, which is only used when syncing with wireless devices. Physical connectivity consists of 3.5mm headphone/line-out and microphone/line-in jacks.

As with Creative’s HS-1200 Wireless Gaming Headset, we’re not dealing with a physical X-Fi chip here: though of course hardware processing is present, the majority of the effects are offloaded onto your machine’s CPU, so there might be some impact on performance if you’re running an older processor. Creative’s minimum recommendation is a Pentium M 1.66GHz or equivalent.


So wireless connectivity aside, what does the X-Fi actually do for you over and above your laptop’s integrated soundcard? The two main enhancements on offer are X-Fi Crystalizer and X-Fi CMSS-3D – the former of which attempts to restore the original impact to highly compressed music by intelligently enhancing some of the highs and lows. How well this works depends on the quality and type of your music, and to an extent on your own ear. We found it did have a positive effect on average, not only on low bit-rate MP3s but also during some videos encoded to a small size. 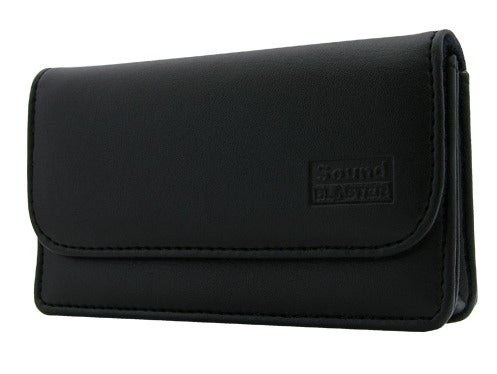 X-Fi CMSS-3D, meanwhile, is potentially the more interesting of the two, as it gives a virtual surround sound effect through stereo speakers or headphones. Again, this does work quite well, though naturally it won’t match true surround setups. Its application is also much broader than X-Fi Crystalizer, lending depth to films and games especially.


Though not aimed specifically at gamers, the SoundBlaster X-Fi Notebook will also enhance your gameplay further with EAX 4.0 in compatible titles. With ALchemy for Vista now gratis, it’s an attractive option. 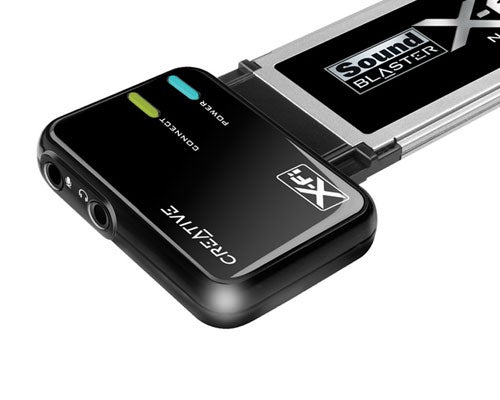 Speaking of value, is the X-Fi Notebook worth its £61 asking price? If you’re looking to pair it with one of Creative’s wireless products it’s an effective and high quality solution, especially if you’re unwilling to rely on Bluetooth for your wireless audio needs. However, if you’re looking to utilise this option, you could be spending up to £120 or more depending on how many receivers you plan to use. This makes it something of a luxury, but one that lives up to its billing when combined.


While definitely a luxury rather than a necessity, Creative’s X-Fi Notebook is well-made, comes with some surprisingly decent headphones (which include an inline microphone) and delivers on what it promises. It’s not cheap though, so it’s worth checking out alternatives before buying.