The Creative Outlier Gold features everything we liked about the Outlier Air – and more. The finish is better, the battery life has been extended and the sound is better balanced. Wireless connectivity has been improved, too. While the Super XFI implementation is a bit of a bust, and the competition tough, these remain a likeable pair of wireless earbuds

The Creative Outlier Gold follow the Outlier Air with even better battery life and the inclusion of Creative’s Super X-FI holographic audio.

We were impressed by the Creative Outlier Air on reviewing them, praising their “energetic and attacking” performance, good seal and excellent battery life.

Despite all those positives, the Outlier Airs weren’t the best budget true wireless earbuds we’d experienced; wireless connectivity was spotty at times.

Creative has produced a quick-fire follow up in the Outlier Gold, which come with the same specs and improvements to battery life. Are they more of the same – or budget wireless earbuds worth seeking out?

The Outlier Gold aren’t replacements for the original Outlier Air true wireless, acting as more of an advanced version. As such the price for the Outlier Gold is higher at £95/$99/AUD$139. You can find them for cheaper than the RRP if you look around.

Creative Outlier Gold design — Finish elevates these earbuds above the original, and the fit is terrific

In essence, we could copy and paste the design section of the Outlier Air review into this spot because not a whole lot has changed with the Outlier Gold.

The new models come in a more fetching Champagne Gold finish, which gives them a more refined look and makes them appear less cheap than the Outlier Air sample. The bulbous shape of the original remains, as does the colour ring that flashes red or blue to indicate the earbuds’ state. 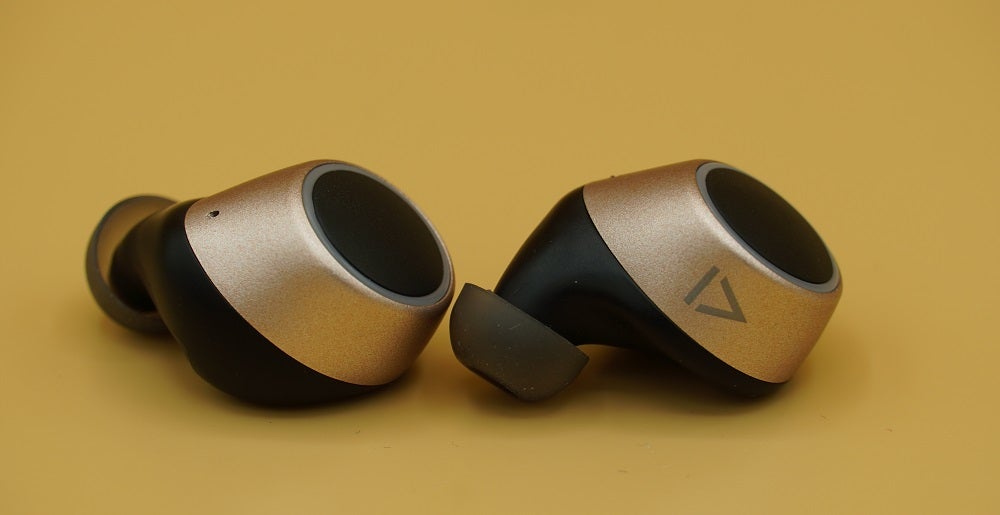 Creative appears to have followed that old adage of “if it ain’t broke, don’t fix it”. The Outlier Air’s design was one of the best in the sub-£100 market; they were a pair of buds that slotted into the ears trouble-free and remained in place. The Outlier Gold are the same, and the seal they create makes them superb at reducing external noises. 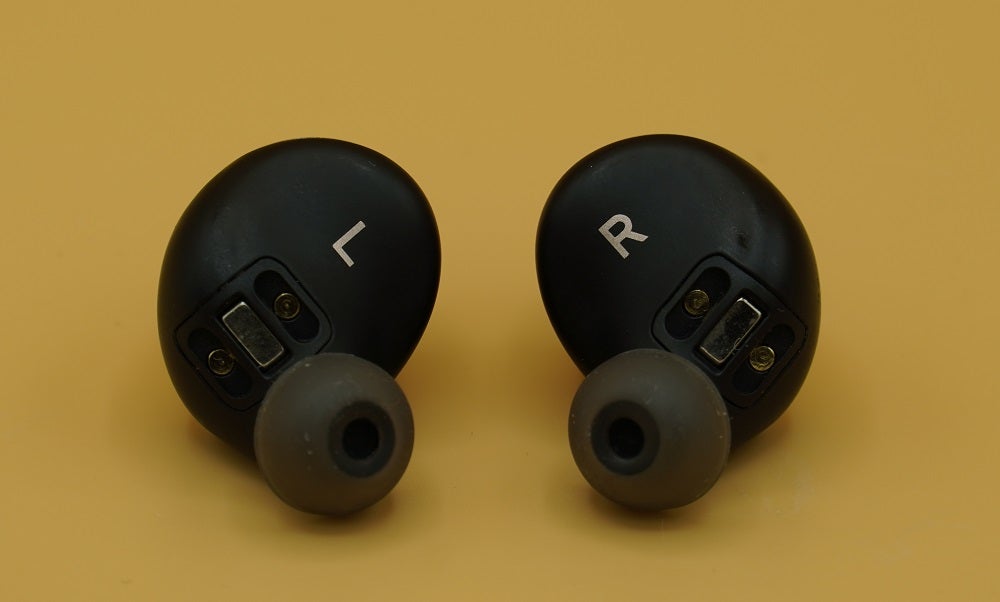 Creative hasn’t seen any need to mess around with playback controls, either, sticking with tactile buttons on the edge of each bud. They do require a firm push, so if you’re the type of person who doesn’t like the sensation of earbuds pressing into their ears, then you may want to give these earbuds a wide berth.

The Outlier Gold come with double the number of ear-tips, though, which is a welcome addition. There are now two small and two medium-sized tips. 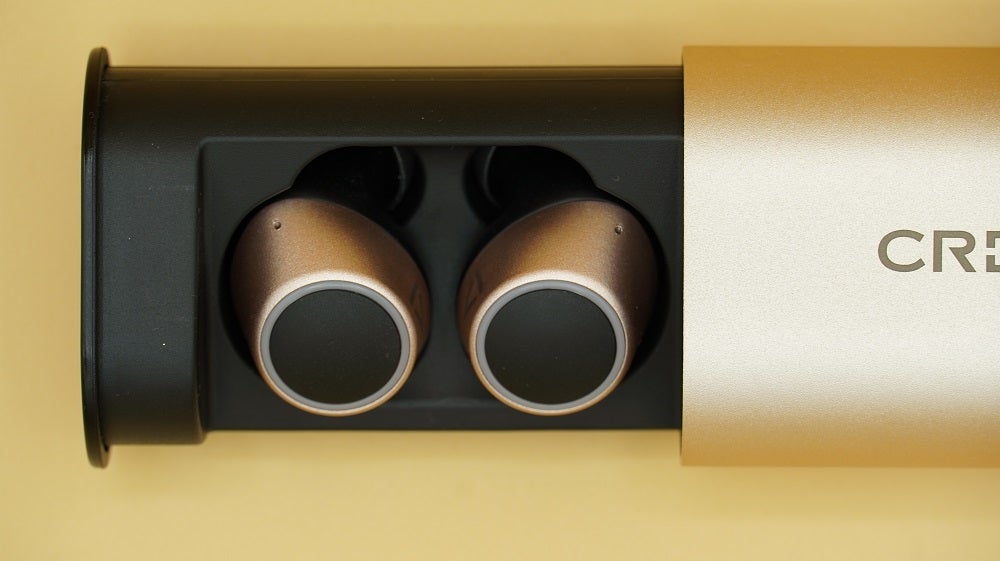 The USB-C charging case is the same as the original, but comes in gold like the earbuds; I like the convenient way the earbuds reveal themselves. Just push the edge where it says Super X-FI and the Outlier Gold pop out on the other side. In addition, the charging case features battery life indicators for the right and left earbuds and the case itself: a blue light signifies battery life of more than 30%; a red light reveals it’s below 30%.

Creative has managed to draw more battery from both the earbuds and the case. The Outlier Air’s 10 hours has now been bumped up to 14 hours, and the case offers 39 hours in total. Maths whizzes will notice that 39 isn’t divisible by 14. Quite why Creative couldn’t have pushed the total to 42 for three full charges is a mystery; nevertheless, 39 hours remains significant. Charging from empty to full takes around two hours. 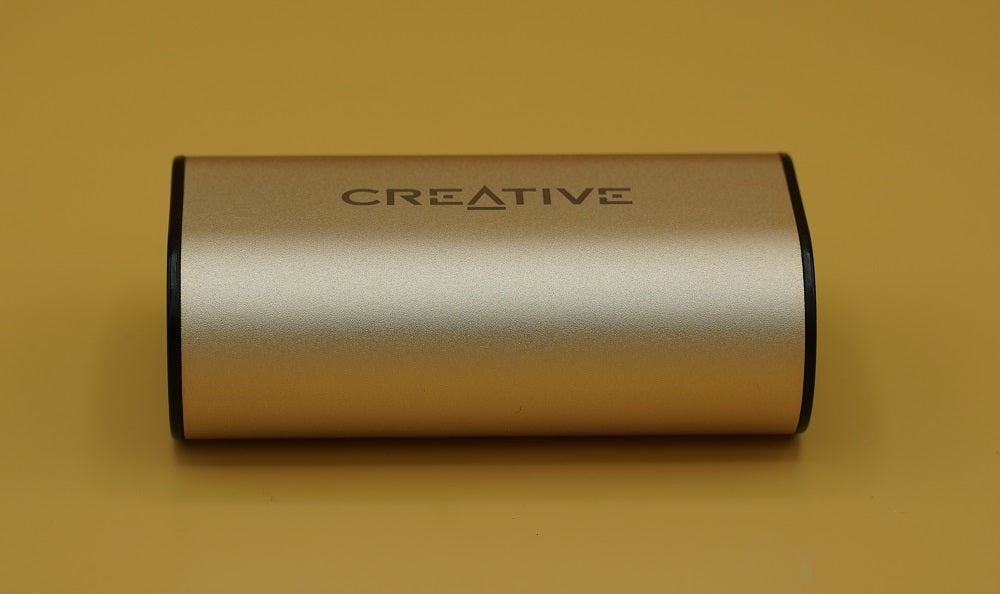 Siri and Google Assistant are supported via the touch buttons, although they’re inaccessible during music playback. With dual voice call functionality, the Outlier Gold pump out audio through both earbuds for clearer audio.

The true new addition to the Outlier Gold over the Outlier Air is the inclusion of the company’s Super X-FI holographic technology. It takes conventional audio and turns it into 3D-like spatial audio. However, I don’t think they’re a good match for these true wireless. More on that in the next section.

The lightweight 5.6mm graphene drivers return for a second outing in these new earbuds – but to my ears, the sound of the Outlier Gold is different to the Outlier Air.

Perhaps I’m misremembering, or Creative has indeed made changes to the Outlier Gold’s tuning. These earbuds are perceptibly better balanced, with no part of the frequency range sticking out like a sore thumb. 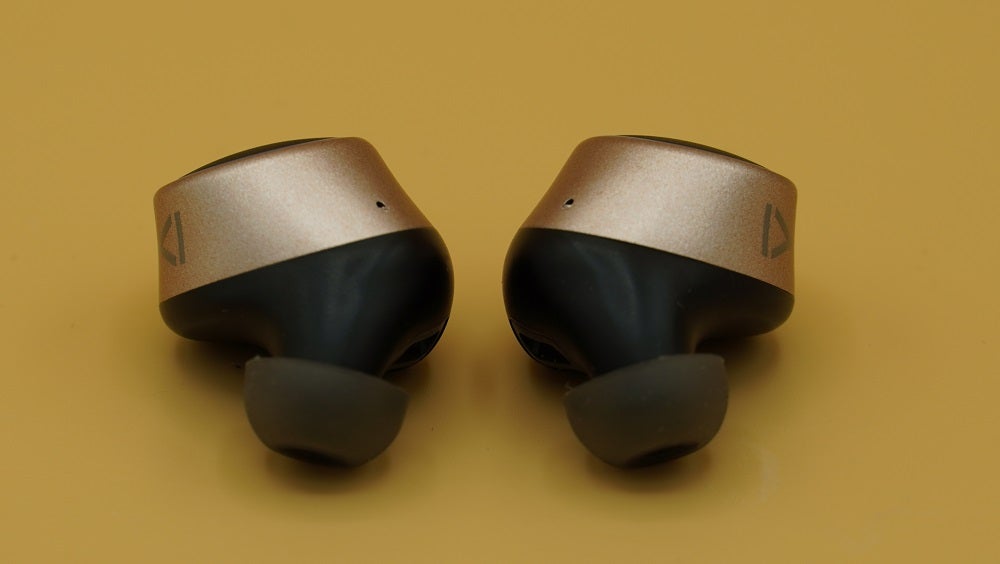 The energy and attack of the Outlier Air is replaced by a smoother, more refined quality that’s still warm in character. Bass has a firm presence and the mid-range offers sufficient detail – although, like the Outlier Air, there are better earbuds out there if you’re after more exacting clarity, sharpness and accuracy.

Treble reproduction fares better, and the soundstage is wide – Billie Ellish’s Bad Guy sounds roomy – although the lack of clarity means you’re not hearing it in the greatest of detail. Dynamically, the Creative Outlier Gold are respectable with highs and lows entertainingly registered, and rhythmically they’re enjoyable with a track such as LunchMoney Lewis’ Bills performed in a toe-tapping fashion. 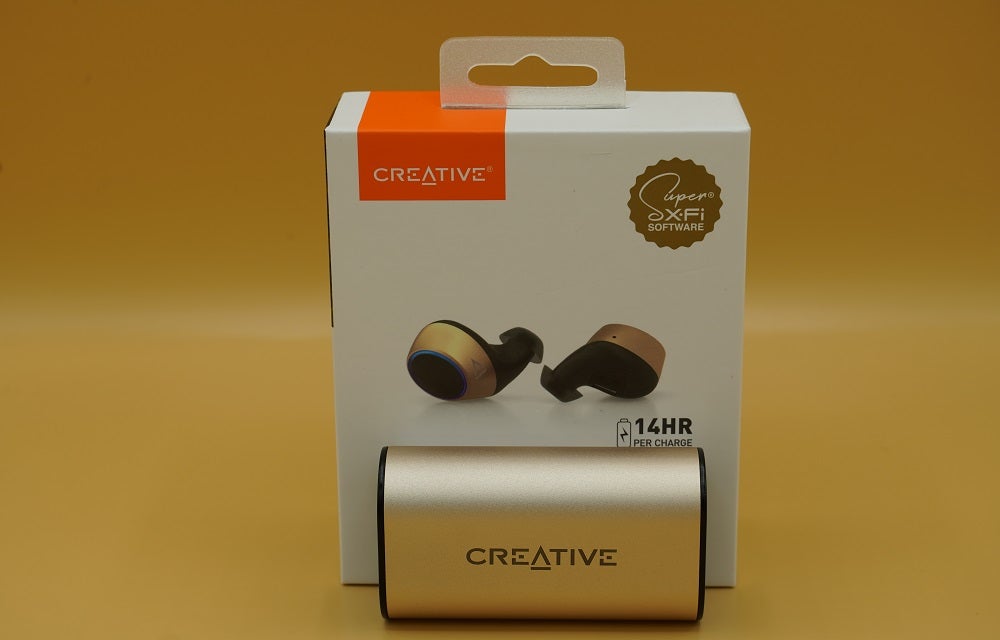 A more notable improvement comes by way of the more stable wireless connection. It’s still a Bluetooth 5.0 connection, but it’s less prone to going out of sync, lagging or dropping. There have been some audio “burps” from time to time, but it’s been more reliable than the Outlier Air.

Creative brings its Super X-FI holographic sound from its full-sized headphones to the Outlier Gold. You need to sign up and download the SXFI app (Android/iOS) and set up a profile to measure your ears, since it can used with other headphones. The SXFI app can play files stored on your device, and all that’s required is tapping the Super X-FI logo in the bottom-left corner. Whether you’ll want to, though, I’m not so sure. 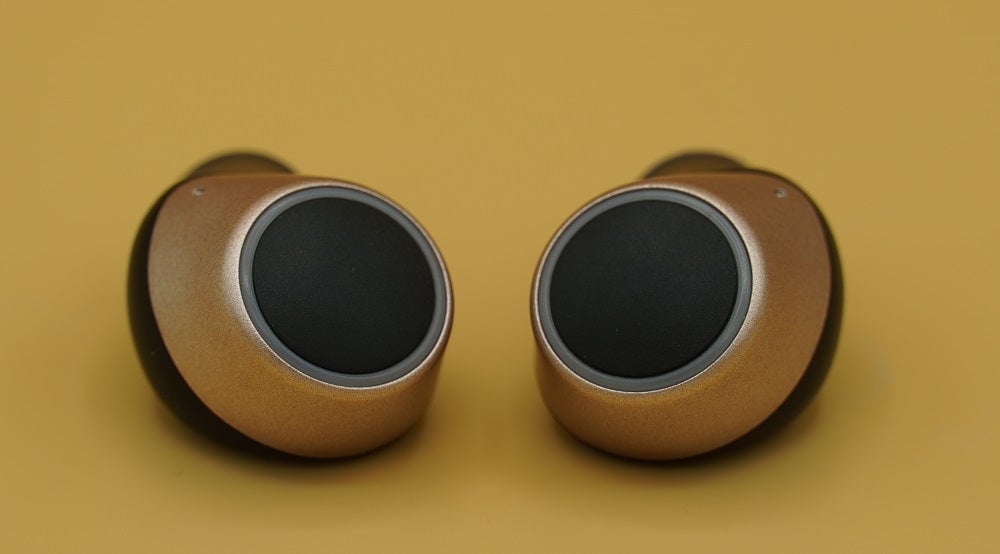 Activating Super X-FI squashes the soundstage and makes it sound less natural than conventional playback. Audioslave’s Show Me How To Live sounds like a low-res recording of a live gig. Cornell’s voice sounds further away, stripping his vocals of intimacy and emotion.

Alan Silvestri’s One Shot from Avengers: Endgame sounds smaller and less expansive, making it harder to pick up the detail of the drums in the first half of the track and lacking the dynamism when it soars in the second half. Super X-FI is an interesting approach, but not one suited for wireless earbuds.

You should buy the Creative Outlier Gold if…

Is it a reason to purchase a headphone? Probably not. But we really like the gold finish of the earbuds.

The Outlier Gold are superior in every way. Better wireless stability, better sound and better looks. A worthy upgrade.

The Outlier Gold can pull double duties with its water/sweat resistant and excellent fit/seal making them a good choice for sporty types.

You shouldn’t buy the Creative Outlier Gold if…

We wouldn’t recommend it. While the experience is likely to be different for everyone, Super X-Fi doesn’t work very well.

The Lypertek Tevi have even more stamina at 70 hours, alongside a comfortable fit and a sound that’s confident, lively and punchy.

They sound better with their energetic but poised performance, outstrip the Outlier Gold in terms of battery life, and also feature the aptX HD codec.