One of the fiddlier things about webcam conversations on most PCs is that you have to set up the webcam and the audio separately. While most notebooks have a microphone built-in, PCs do not, which means you have to use an often poor desktop stand microphone, or a headset, which can be restrictive, clumsy and messes with your hair.


This is where a webcam such as the Creative Live! Cam Voice comes into its own. The microphone is built-in, so once you’ve installed the drivers all you have to do is plug in the webcam and you can see and talk without having to worry about anything else. The selling point that has enabled Creative to dig out its Live! name, is its noise cancelling technology that’s designed to cut out extraneous noises in noisy environments so you can hear and be heard more clearly. If you do want to have a private conversation a lightweight single earpiece headset is provided. 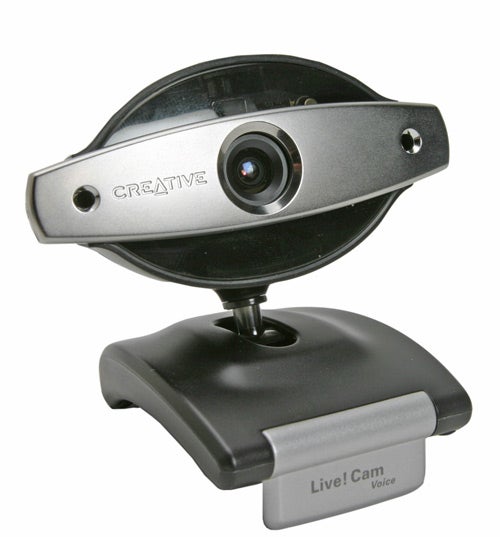 The webcam looks pretty funky as befits a camera at the top of Creative’s range with the lens set in the middle of a wide centre strip, surrounded by curves. Inside the bottom card is a light, which glows yellow when the camera is connected and changes it red when the camera is active. The camera is set on a stalk which is mounted on a clip, which can easily be attached to the back of a desktop LCD or laptop lid.


You need to install the drivers before you plug in the webcam or the audio features will not work. If you do plug it straight in the video side will be basically detected. I found when using it on three machines that the install process from the CD takes an excessively long time to complete even considering that there are numerous applications to install as well as the drivers. Even once installed the software runs an auto update feature which will go and check to see if you’ve got the latest software installed, which is quite slick.


After use Creative recommends unplugging the webcam, presumably to avoid it being hijacked by mischievous Trojans, but I found it was useful as sometimes the video wouldn’t restart after a previous use in Skype, which unplugging and replugging solved. 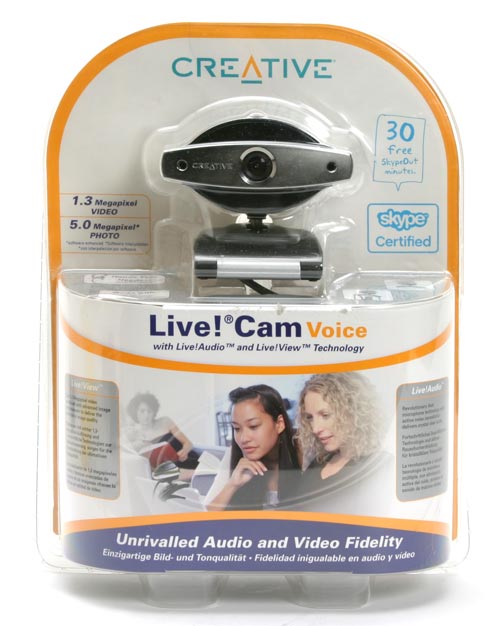 Along with the drivers you can install a Photo Manager application for handling the snapshots you can take with the camera and a Photo Calendar application, which lets you use the pictures next to a calendar and print them out, which seems like a rather odd inclusion. The main software is the WebCam Center from where you can record video click, take snapshots, and enable the Remote Monitoring and Motion Detection features which are useful for security, at least if if you can hide the webcam and PC so that they don’t get nicked too. There’s a time Lapse mode in there too.


However, I found that the WebCam Centre software quite buggy even with the latest updates and it was consistently unable to detect the camera, even though it was fine in Skype.

The camera has a 1.3 megapixel sensor, yet claims a ridiculous five megapixels for still images although it freely states this is with software interpolation. What’s the point I wonder, save to snare the unsuspecting with large numbers.


Video can be captured at 1,280 x 960 at 15fps or 640 x 480 at 30fps. Image quality in Skype was perfectly acceptable and noticeably better than some bottom of the range webcams that we’ve tried in the past. Certainly the wide angle lens did have a real world benefit and the first time I used the camera the other party commented how much they could see to the sides of me. If you do want to keep what’s going on behind you more discreet you can employ the face tracing option, which zooms in on the face of the person talking. I found this quite distracting when actually in conversation though especially as it mistook a Lucozade bottle for my face on one occasion, which I was slightly offended by. There’s a fast tracking mode, which made the conversation feel like a mad MTV moment. It’s a gimmick, which I’d leave off. 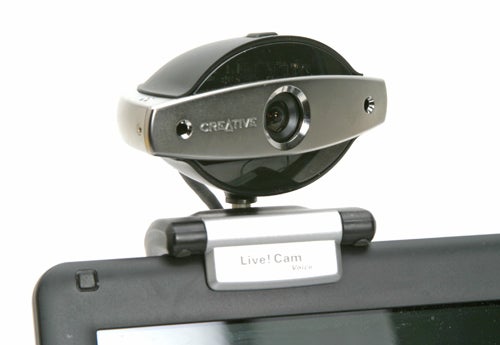 A better gimmick is the Advanced Video FX mode, which lets you do silly things to your image such as a add a psychdelic shimmer, a warped effect or a photo frame. It’s officially Fun for All the Family. Annoyingly though, you have to manually switch between video drivers in the Skype options to get the effect to work, which may be belong the ken of many users. Also you have to have the Advanced Video FX applet running in the background, despite there being an ‘Enable’ checkbox in the separate console, which is confusing. The effects are slick but the implementation is anything but.


The crucial noise cancelling feature did work as advertised however. When the Live! Audio feature is turned off no effect is applied, which is good if there are several people present, such as a family having a conversation. If there’s background noise then enabling the noise cancellation works a treat. In one call background music blaring from a stereo was almost completely eliminated. The Directional Live! Audio setting cuts out all noise by filtering everything but sound picked up directly in front of the microphone. This gives audio a clinical digital quality though and is designed only for use in very noisy environments such as a web café. A better choice here would be to use the supplied headset, though you’ll need a microphone and headphone socket, connections which my ageing G4 iBook, for example, doesn’t have.


If all you require is a webcam with a built-in microphone then Creative itself offers the WebCam Live! Ultra, which costs a tenner less. However, you’ll be missing out on the Live! Cam’s noise cancelling feature, which works well and is impressive. All in all, this is a slick webcam and only the idiosyncracies with its software prevent it from scoring higher.