From console controllers to the Internet, we live in an increasingly wireless world – and it’s no surprise, since wires are a hassle, constantly getting tangled or stuck behind things and limiting our freedom of movement. And if there’s one sector where freedom of movement is needed, it’s gaming, which is why we’re taking a closer look at Creative’s HS-1200 Digital Wireless Gaming Headset, powered by X-Fi technology.


In the box you get a quick-start guide, driver CD and manual, and of course the headset and transceiver. The actual HS-1200 set itself exudes quality and style, and is finished in a combination of black, silver and metal. Disappointingly you don’t get a carrying case, though that would increase cost significantly. 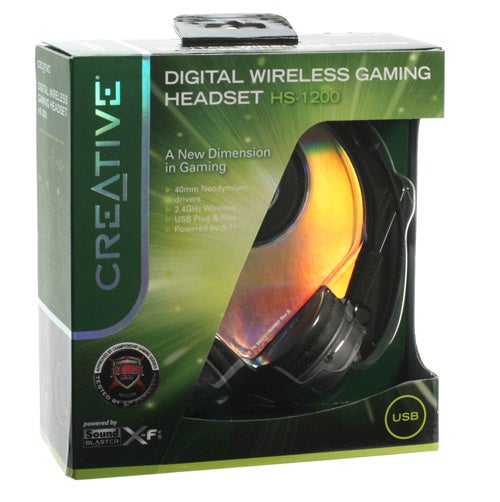 The transceiver consists of a small rounded unit with two cables running from it. One connects to your computer using USB, while the other plugs into the headset to charge it. This unit has a rubber bottom section to prevent scratching and improve grip, and is constructed using matte-black plastic. In its centre is a large button used for pairing the headset with the transceiver while on its front is a small but bright blue LED power indicator that stays lit when the headset is on and blinks if it’s powered off. 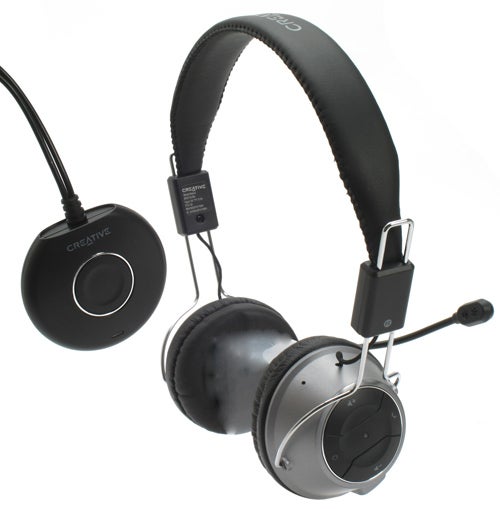 The HS-1200 feels quite rugged – a virtue of the strong plastics and metal used in its construction. The flexible headband is lightly padded, and though it’s not uncomfortable, it could have done with a little more stuffing. The cups are fully adjustable since they slide up and down on metal rails that feel much stronger than the flimsy plastic implementations on some headphones. However, with this design the cups can’t be rotated. The slide action relies on friction rather than a ratchet mechanism and making adjustments was very stiff – but then that’s a good thing since you don’t want the cups moving after you’ve found your ideal setup. 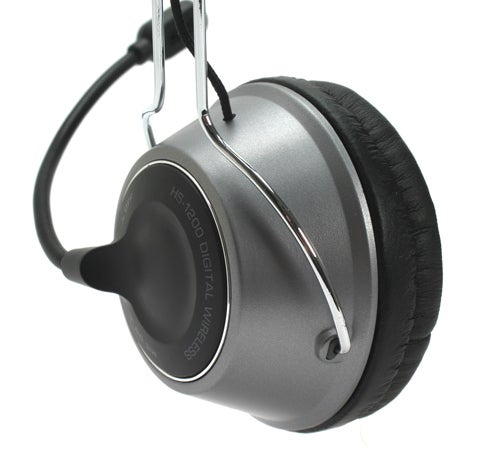 The round cups themselves are quite small, measuring only 6.5cm across. This means they sit on the ear (supra-aural) rather than around it, which prevents the ears getting too warm and sweaty as can be the case with circumaural sets. However, despite the cups’ thick leatherette padding, foam insides and the headset’s overall weight of only 150g, we found that the pressure ‘on’ the ear can become uncomfortable after around two hours of use. For the gaming sector that’s probably no bad thing, as ideally you’re supposed to take a break every 45 minutes, but it does limit their appeal for simple activities like music-listening or watching films.

On the headset’s right cup reside its controls. These are divided into four contoured buttons, with volume up and down sensibly placed at the top and bottom, while the front button answers or ends Skype calls and the back one turns the set on or off. This arrangement is generally fine, though occasionally you might find yourself turning off the phones when you only meant to adjust the volume.


The left ear-cup carries the noise-cancelling microphone, which unlike the flimsy foam efforts found on so many headsets is constructed of solid, thick plastic and mounted on a flexible metal arm. It doesn’t have a dedicated button to turn it on and off; instead you swivel the mic down to turn it on and back up to turn it off. 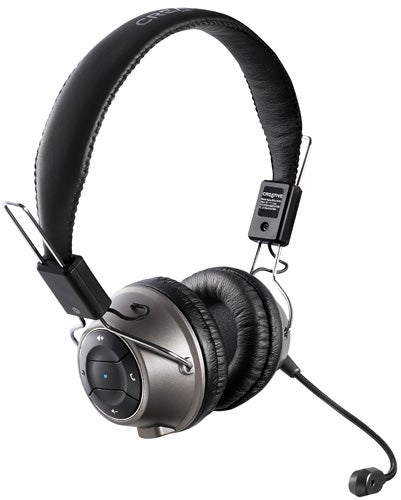 Since the HS-1200 receives its audio signal over USB, it can only be used with a PC. On top of this the software required to run it is only compatible with Windows XP or Vista, so Mac and Linux users need not apply.


Creative’s headset uses 2.4GHz RF technology giving it an excellent claimed range of 22m, which held up in testing. Battery life is also excellent. Being able to charge the headset from the transceiver unit through a single USB is a simple and elegant solution, though you might want to get a USB charger if you don’t have a computer that keeps its ports powered when switched off. 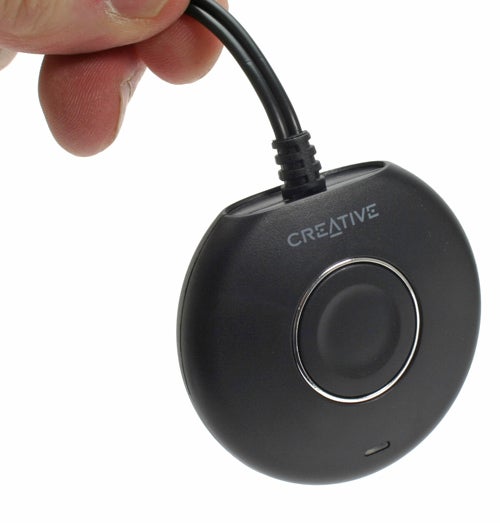 However, even a short charge is enough to get several hours of use out of the HS-1200 and the set can be hooked up while in use so you’ll never be caught out. The only real disadvantage to the HS-1200’s charging system is that the battery is not user replaceable and lithium batteries have a habit of dying after a few years. It’s also worth keeping in mind that the charging cable is quite short at 88cm.

Setting the HS-1200 up is really simple as far as the hardware is concerned: simply plug in the transceiver, pair it with the headset as described in the manual and you’re good to go. However, you’ll need to install Creative’s software before hooking things up, and it’s not the most straightforward to get through. At the very minimum, you’ll need to install Creative’s Alchemy X-Fi, universal USB Headset Driver and AutoUpdate.


Once installed, the Audio Console – which is an attractive visual representation of a classic receiver – is easy to operate. Since the HS-1200 incorporates Creative’s X-Fi processing, the usual suspects such as EAX HD and X-Fi Crystalizer are on hand for enhanced gaming effects. 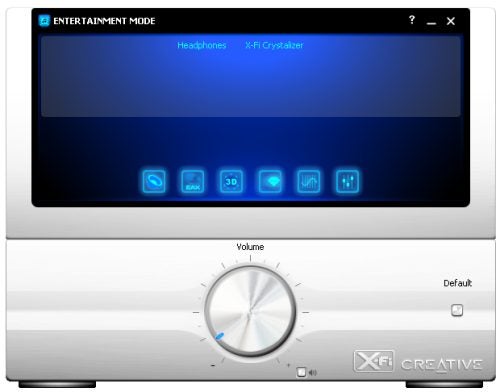 Creative isn’t a stranger to high-end audio gear so it comes as no surprise that despite their small size, the HS-1200 headset puts in a good performance. Driven by 40mm Neodymium magnets, sound has plenty of depth and warmth and bass is surprisingly heavy and punchy. It doesn’t compare to a high-end, full-size set of headphones, but for on-ear cups the HS-1200s remain distortion-free at up to deafening volume levels.


The only real criticism is that occasionally the audio may sound a little processed or lack clarity – a product of the slight bias towards bass, but that’s fairly common on gaming-oriented sets where emphasis is placed on bringing out earthy explosions over high-frequency effects. There’s little to fault with the microphone, which does an excellent job of picking up your voice and filtering out background noise. 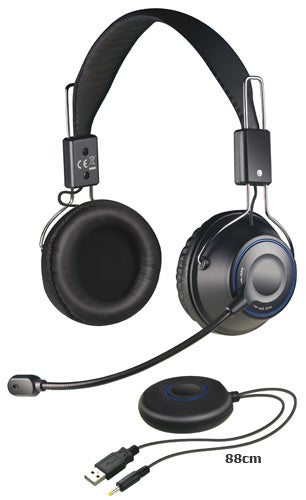 When it comes to value for money, the HS-1200 headset does quite well too, not least because there’s very little that competes with it on price and performance. In fact, at £55 it’s pretty darn good value if you’re looking for a wireless headset.


Overall, the Creative HS-1200 Digital Wireless Gaming Headset is a decent effort: it is well-built and offers a whole range of effects that actually work quite well depending on the material. It’s also very affordable, so you needn’t break the bank to banish those wires. However, it does have its faults, including a slight lack of clarity and Windows only support. Most important, though, is that the set can become uncomfortable after an hour or so, which is ultimately the difference between a good headset and a really good one.