It says something about how highly we regarded the predecessors of these new-look Creative T40 speakers that Riyad, Andy, and I were giggling with excitement when they arrived. Thankfully our embarrassing child-like outbursts weren’t in vain as these fully live up to our expectations.


For those of you that are feeling somewhat in the dark as to these mysterious T40s, I could just refer you to the link above to do a bit of background reading but instead I’ll be kind and give you a quick summary. Essentially, Creative created something of a storm back in April 2007 when it released a seemingly innocuous set of 2.0 desktop speakers, the Gigaworks T20s. We were simply astonished at the quality of sound they produced and loved their styling – and we weren’t exactly displeased with the £50 price either. 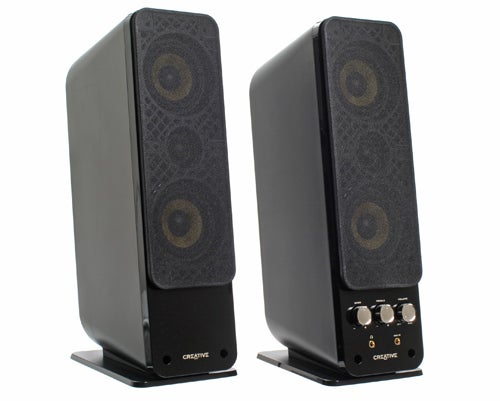 A few months later the T20s got a bigger brother in the form of the T40s and just like their siblings they blew us away with their combination of low cost, great sound, and good looks. A couple of years later and we now have the new versions of both these venerable speakers in our office. Or more specifically, Andy has the T20s on his desk (review coming very soon) and I have these T40s, sitting pretty next to my pair of first gen T40s.


The Creative Gigaworks T40s, then, (both new and old) stand about a foot high, with these new, Series II, versions being ever so slightly deeper and taller – 31 x 14 x 9cm to be exact – than their predecessors. In this regard, they’re certainly quite imposing for a desktop speaker set. However, being a 2.0 setup you at least don’t have an enormous subwoofer to contend with. Also, if you have a large monitor sat on your desk (24in or above) these look much better proportioned than some piddling alternatives.


However, while these new T40s are of the same form factor as the old ones, there are actually numerous differences in most other aspects. For a start, the colour scheme has changed with the front fascia now sporting a glossy black finish that’s inset with thousands of subtle sparkly blue speckles. I can’t say I find it more attractive than the previous look and in particular it really shows off any dust that has settled on it. That said, it wouldn’t put me off buying them. 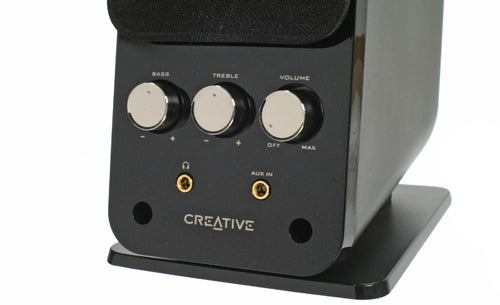 The other most obvious change is in the front controls. Rather than the slightly awkward arrangement of the old generation that had the power switch on the back and a standard volume dial on the front, the new T40s use a combined volume and power knob that is surrounded by a bright blue ring of light when the speakers are powered on. This is a much neater arrangement that leaves the space where the power indicator light was on the previous version free to be used as a front-mounted auxiliary input – the lack thereof being a major gripe of ours with the previous version.


Unfortunately, on our sample the volume knob was slightly misaligned leaving a rather wonky ring of light. While this is only a cosmetic problem and it could be an isolated case (the T20s on Andy’s desk seem fine) it’s the kind of thing that might bug me if I’d just spent £70 on these and it’s certainly the sort of minor manufacturing issue that I could see regularly slipping through the net. 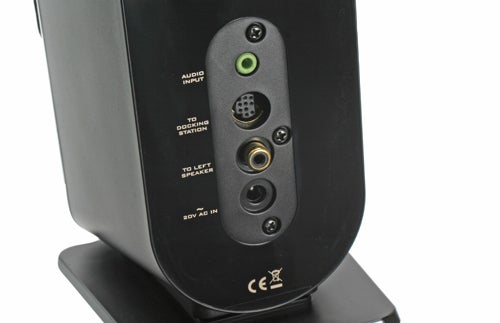 Finishing off the talk of connections, round the back we have the power socket, the RCA connection for the second speaker, a docking port for use with Creative’s various mp3 player docks, and the main 3.5mm stereo jack input. All sockets are gold plated and sturdily mounted so should provide a quality connection for years to come. Included in the box is a gold plated twin-RCA to stereo 3.5mm jack adapter and there are a couple of basic stands that screw to the bottom of each speaker to help stabilise them (personally I use them without cause I think they look better).

One area that, at first glance, appeared not to have changed is the the T40s audio capabilities. The same twin mid-range drivers with their distinctive yellow woven glass fibre cones and single top-end tweeter are in use and they remain in the same position. There’s also a similar looking bass port in the top, though this has changed from a perfect circle to a rounded oblong. However, my first clue that something had changed was seeing the rated output of these speakers had risen from 14W to 16W. Not that this is a given for better audio but it’s about the only thing that outwardly explains why these are so much better than my first generation set. 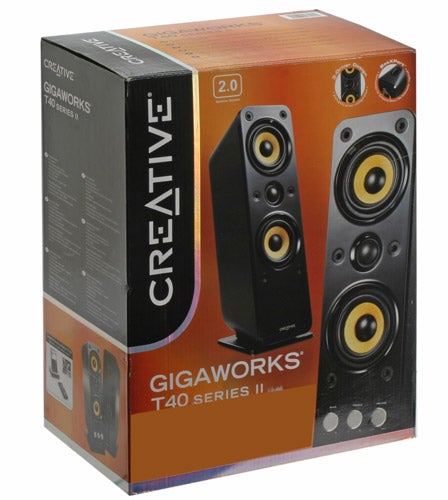 Immediately obvious is how the low-end has been filled out providing more punch and giving a real sense of life to kick and low-end tom drums as well as giving bass lines the true rumble they deserve. In contrast the first generation set, while plentiful in warmth, seem to lack that little bit of punch. We’re not talking thumping low end like you’d get from a dedicated sub woofer but there’s definitely a more satisfying thwack.


It’s not all about bass, though, it’s really at the top-end that things come together. There’s a sparkle to these that the first generation just can’t match, no matter how much you tweak the treble control. This also helps the Series IIs present a more open and involving sound stage that even when sitting three feet away gives you a perfect stereo effect (i.e. audio sounds like it’s coming from straight in front of you rather than from the speakers).


Picking out a few particular tracks that seemed to highlight these differences best, I started with ”10,000 Years” from High On Fire’s first album, ”The Art Of Self Defence”, which is a track that’s thick with down-tuned heavy guitars and pounding drums. With the first generation it sounds ever so slightly muddy and compressed. Upping the treble dial filled out some of the details but there was still a lack of bass presence. Switching to the Series II and the booming kick drums start to hit with a bit more force while the growling guitars have that extra sense of bite. 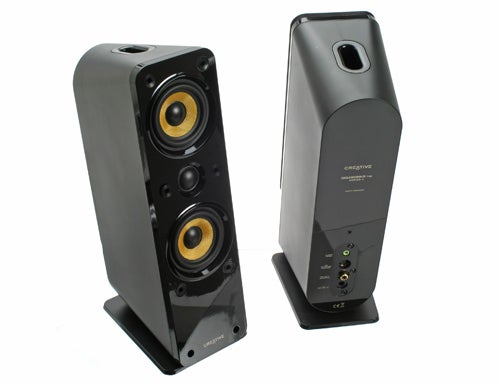 Stepping up a technical gear, I tried the opening track from Opeth’s ”Ghost Reveries” album. Opeth’s multifaceted sound combines full-on heavy metal guitar riffs and thumping drums with gothic keyboards, acoustic guitars, growling vocals, ‘proper’ singing, and random eclectic instruments and wrap it all up in a Dream Theater-esque progressive package. It can be quite a challenge for any sound system to pick apart all the aspects of this music at once but these T40s coped with aplomb. Again, in contrast, the old T40s required a significant dose of extra treble to bring out all those hidden details and no amount of tweaking could fill out the low-end in the same satisfying way as the Series IIs.


Changing tack completely and Mozart’s ”Eine Kliene Nachtmusik” was given an airing. This classic masterpiece of string arrangement can sound shrill and uninviting if not handled properly but the T40 Series IIs delivered it with all the subtlety and warmth that such a piece deserves.


Ultimately, having tried the T40 Series IIs with all manner of music, films, and games I’ve come to absolutely love their sound. Sure, I’d prefer the true kick from a sub every once in a while but for desktop listening they’re more than capable, and for the price I wouldn’t hesitate to recommend them. As for how they compare to the original T40s, I suspect the improvements are merely in how they’ve tweaked the default tone rather than any fundamental component upgrades. Nevertheless, I couldn’t match the sound of these Series IIs by manipulating the controls of its predecessors so maybe there is a dark secret involved. Whatever the answer, I certainly wouldn’t say you need to upgrade from the originals but these are very worthy successors.


Creative impressed many people with its first generation Gigaworks T40 speakers so these new versions had a lot to live up to. Thankfully, the T40 Series IIs haven’t just succeeded in maintaining that reputation; they’ve actually gone one step further and surpassed their predecessors. Sure, they’re a bit big and you can certainly get better sounding speakers if you’re willing to splash the cash but for their price these are without equal.