Creative is a company with pedigree. Its range of Sound Blaster X-Fi soundcards continue to set the standard for other consumer targeted soundcards and just to underline its importance, the company recently announced it had passed the 25 million mark of MP3 players sold. Looking at recent efforts such as the Zen, it’s clear the company isn’t short of ideas either. However, more recently when I think of Creative I am reminded of the superb Gigaworks T20 speakers, which received a well deserved Editor’s Choice award thanks to their outstanding sound quality at an astounding price. It’s clear many of you agreed too, with glowing reports from all over echoing the belief that they are a truly excellent set of desktop speakers. 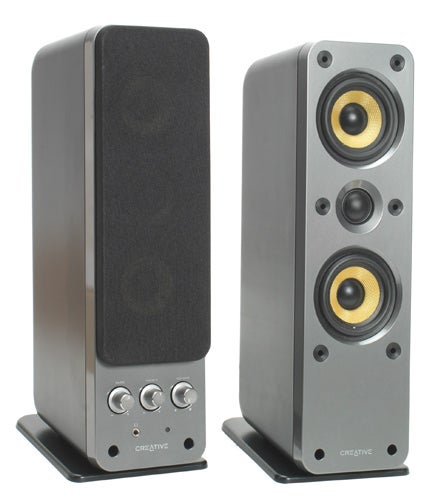 Encouraged by these glowing reactions, Creative has gone away to try and improve on the T20s and the result is the Gigaworks T40s. Retailing for around £75, visually the similarities are fairly obvious. Both have the same sleek graphite grey exterior, with thick black plastic casing and removable protective grilles. On top there’s still the BasXPort to help boost the lower mid-range, while the mid-range drivers are still made out of the yellow woven material that’s so striking to the eye.


However, there are plenty of differences as well. Thanks to an extra mid-range driver on each speaker they’re far taller and to offset this extra height each speaker now has a stand, a useful addition considering the T20s were slightly unstable. There are also some small but quite significant changes in connectivity, with the front mounted 3.5mm auxiliary jack replaced by a docking port on the back that’s compatible with Creative’s X-30 Docking Station for iPods. This isn’t a change one can approve of either, it may help Creative sell more docks and iPod users won’t be as inconvenienced, but the lack of a convenient front facing connector is a significant backward step. Ideally one wants both the dock connector and a auxiliary input, though presumably there’s a reason why this isn’t possible. 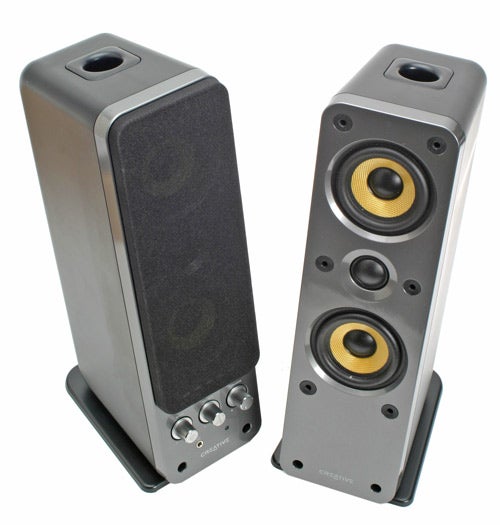 In addition, unlike the T20s you no longer turn the speakers on and off using the volume dial, instead there’s a switch on the back. This is a good thing in one respect, allowing you keep preferred volume settings instead of having to reset them every time you use the speakers, though reaching behind to switch the speakers on isn’t ideal either and it would have been good if Creative could have found some space on the front for an independent switch.


Despite these small reservations, the T40s maintain the same visual appeal as the T20s did – only in a larger and slightly more imposing frame. In the box you get the same things you did before, with an audio lead to connect the speakers to your preferred source and adapter for use with dual RCA connections. One other minor change comes with the power adapter, which is no longer self contained within the plug but is a separate in-line unit. This is definitely an improvement, especially if you’re plugging the speakers directly into a wall socket.

Though there are a few cosmetic differences, it’s clear the T40s use the same amplifier due to the identical output figures, with 14 Watts RMS per channel and a frequency response range of 50 hz ~ 20 kHz. This is no bad thing either, since the T20s were already very good and quite capable of reaching heady volumes. However, since there’s no extra power output and the two extra drivers are essentially duplicates, are the T40s actually any better than what preceded them? To find out, it’s time to flex the ear muscles and find out how things sound.


For this, we’ve also enlisted the help of a set of Gigaworks T20s, providing us with a definitive comparison between the two. For starters, just playing a few different tracks made it abundantly clear that there’s a noticeable difference in the kind of the sound the T40s produce. It’s a much wider sound; the kind that can fill a large room comfortably at even moderate volumes. This should make them ideal for a living room, either plugged into a TV, games console or anything else you might like to use, like an iPod or another MP3 player. However, the sound is slightly hollower too, which isn’t such a problem when sitting away from the speakers but is noticeable if you’re sitting at a desk nearer to the speakers. There are some other benefits though, with the extra driver providing more clarity at lower volumes, an aspect where the T20s did struggle somewhat. 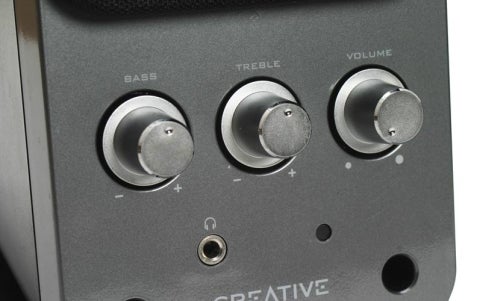 For more specific testing we threw a number of different tracks at the T40s, varying from some classical, hip-hop and more tradition rock and pop. Starting with Ready or Not by the Fugees, the punchy bass line was particularly impressive, while Lauryn Hill’s vocals were perfectly clear and well defined. This was also evident in Coldplay’s Fix You, with the vocal line cutting through the large variety of instrumental lines, which were also well produced. Moreover, the wider sound captured the epic nature of the song, adding real drama to the various crescendos as well as clarity and purity to the quieter parts of the track.


Moving to something with more percussion, Reckoner from Radiohead’s new album In Rainbows demonstrated the superb high-range performance, with the outstanding clarity to the light but beautifully arranged percussion. However, the lack of subwoofer was also evident with the bass line not as prominent as one would like. This is somewhat inevitable in what still is a comparatively small 2.0 set, but it’s worth bearing in mind if you’re a bass fiend. 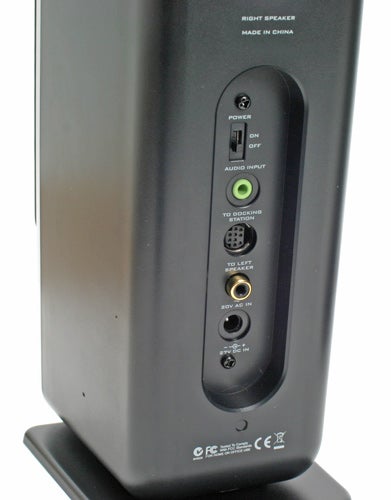 For something a little more up tempo the explosive Good Luck from Basement Jaxx seemed like a good choice. Again, bass was punchy but not extravagant in nature, though percussion and vocals were truly superb. This track once again highlighted the wide and pleasing soundstage produced the T40s, good enough that you could happily use these for a house party with everyone able to enjoy the music.


Classical music is always a good test of any speaker set, simply because you get a massive range of instruments all of which need to be produced effectively to capture the essence of the piece. Here, the improvement between the T20s and the T40s was particularly striking. Playing Elgar’s Nimrod from the Enigma Variations, it was noticeable how this set dealt with the subtle tones far better than the T20s.


Ultimately, this meant it was far easier to set a volume where one could comfortably hear the quieter moments, and that wasn’t too loud when the crescendos materialised. This was also beneficial in the choral music, providing excellent distinction between the differing baritone, tenor, alto and soprano lines.

For music then, the T40s are an excellent choice. Due to the lack of subwoofer you don’t get the flashy and explosive bass lines some people like, but it also means you get far better overall sound due to the lack of separation. With the wider sound offered by the extra drivers and the better low volume clarity, there’s also a distinct difference between these and T20s.


Of course, music isn’t the only thing you want speakers for, with films and gaming always important. This was one area where the T20s were merely decent rather than outstanding, but the T40s go some way to correcting this. Again, one must stress you won’t get the explosive bass one would get from having a subwoofer, though it’s conceivable you might like to use the T40s in conjunction with a sub bought separately. 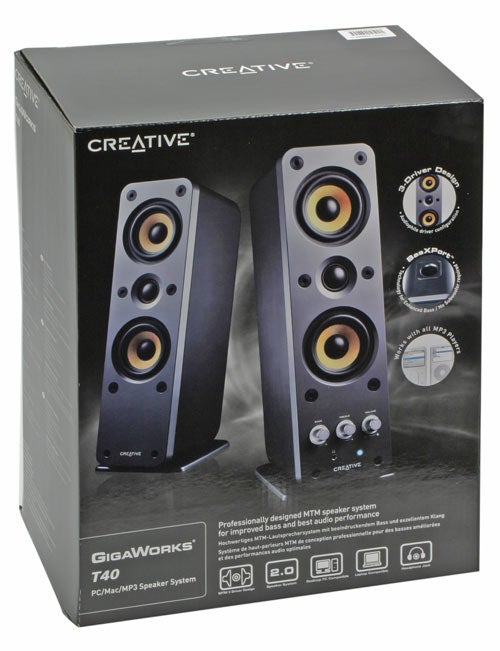 In any case, the T40s are an improvement in both areas. Dialogue is more clear and defined, especially at lower volumes, while explosions and gunshots have more impact. Moreover, the wider sound produced by the T40s creates an immersive environment that’s very satisfying to sit back and enjoy. Gaming performance is also impressive, providing plenty of oomph to effects and dealing with the subtleties of more atmospheric titles admirably.


As you might have gathered then, the Gigaworks T40 speakers are every bit as impressive as the T20s that came before them. For music, the 2.0 channel mix is ideal, creating a balanced and well defined soundstage with crisp and clear highs, great vocals and an overall sense of warmth and immersion. Bass isn’t explosive, but that’s to be expected and it would be churlish to compare it directly to a 2.1 set in this department. Indeed, the only real point of concern is Creative’s decision to opt for a proprietary docking connection instead of a 3.5mm AUX input. 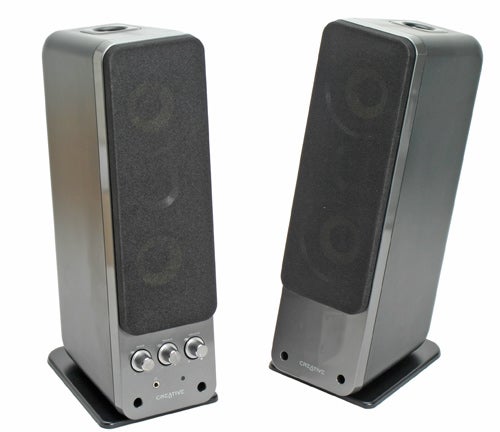 Thus, only two questions remain. First, should you buy the T40s and secondly, are they worth the extra outlay compared to the T20s? Perhaps inevitably there’s no clear cut answer, because it rather depends on how you want to use them. If you want speakers just for desktop use, where you’re sitting at a desk near to the speakers, you’re probably better off with the T20s. They’re not as large and imposing as the T40s and whereas they sound slightly cavernous when up close, the T20s have a closer and more intimate sound that’s superior when you’re seated quite close to the source.


If, however, you want something for the living room or for when you’re away from your desk, then the T40s are the better option. Thanks to the wider sound they produce they fill the room more convincingly, while the performance at lower volumes is much improved. They’re also better for gaming and films, with clearer dialogue and greater immersion too. Whichever you’re intentions, both remain compelling options for those who want decent sound quality at a reasonable price. 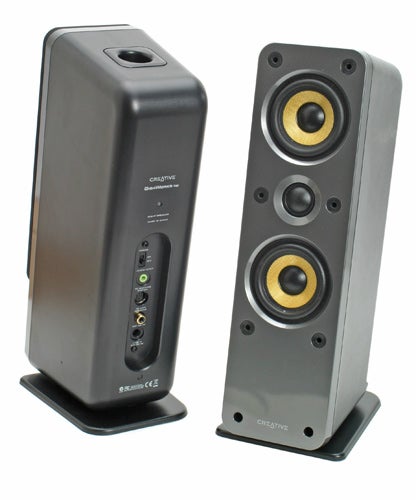 
Just like the Gigaworks T20s, the T40s are a superb set of speakers for the price. Excellent clarity and a wide sound makes listening to music a joy, bringing the subtleties of all kinds of music to life. Gaming and film performance was also impressive and if you want an inexpensive but high quality set of speakers for a living room, then these come highly recommended.