I’ve always questioned the logic in multi-channel, surround sound speaker sets for the PC. I simply don’t believe that most PC users have the space or the inclination to place speakers all around their computer desk and chair – after all having wires trailing all around your room is something of a recipe for disaster. As a result I often see PC users with multi-channel speaker sets all piled up on their desk, instead of placed around the listener. Despite being one of the orchestrators of this situation, Creative came to its senses last year and brought us the truly excellent GigaWorks T20 speakers, that duly walked away with a coveted Editor’s Choice award.


The key to the GigaWorks T20s was their 2.0 channel configuration. So, not only were you losing the mass of satellites that come with a surround sound system, you also didn’t need to have a subwoofer sitting under your desk. The latter point was an important one, since even though 2.1-channel systems have always been available from a number of manufacturers, most of them utilise woeful crossovers, which generally results in a complete lack of cohesion between the bass and the treble and mid range. Because the GigaWorks T20s and subsequently the GigaWorks T40s were full range speakers, there was none of the overpowering bass that plagues most 2.1-channel PC speaker systems. 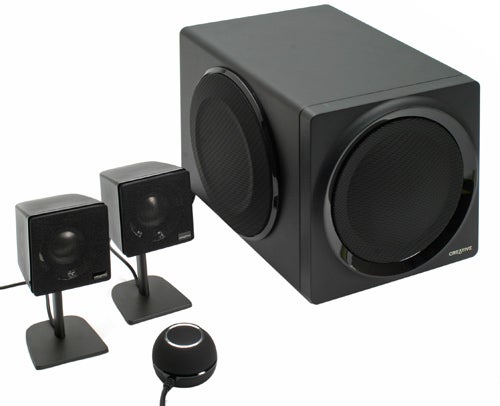 I was therefore a little sceptical when Creative announced the GigaWorks T3 2.1-channel speakers a couple of months ago. In fact I stayed sceptical right up to the point when one of Creative’s sound engineers flew over from Asia to demo the T3s. What I heard at that demonstration sounded pretty promising, but as always, I reserved judgement until I had a retail set in my possession, and that’s exactly what I have right now.


The first thing you notice about the T3s is how small the satellite speakers are. When I met with the guys from Creative they demoed the T3s against a Bose set (not much competition I know), which makes sense considering the similar form factor. Of course there’s a decent size subwoofer that sits under the desk, but even so the satellites are pretty tiny. The last part of the equation is the desktop control pod, and here Creative has outdone itself. The round remote unit has a silky smooth motion, that makes delicate volume adjustment simple. There remote also has both headphone and line-in sockets – the latter ensuring that you can plug in your MP3 player as well as listen to the music on your PC.

At the rear of the subwoofer you’ll find a socket for the remote control, left and right connections for the two satellite speakers, left and right inputs for hooking up your PC, a figure-of-eight power socket and a master volume for the sub itself. And it’s that last control that’s of paramount importance, assuming you don’t like having your bass overpowering everything else when listening to your music. Unlike many 2.1-channel speaker sets that I’ve used, where the sub is either in your face or nonexistent, the subwoofer with the GigaWorks T3s can be adjusted in the most delicate increments. This allows you to ensure a rich degree of bass, but not at the expense of detail and clarity – more on that later though. 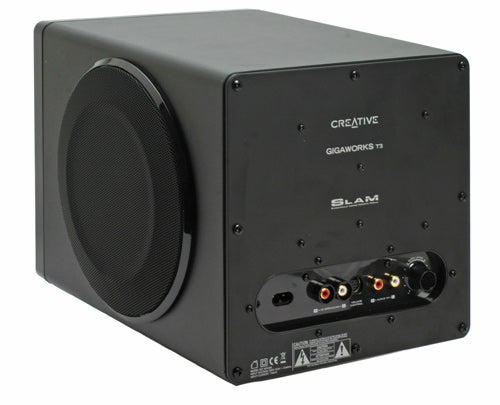 The build quality of the T3s is excellent, with the tiny satellites exhibiting a reassuring weight and sold feel. The cabling is also thick enough to convey confidence, even if your colleagues have a habit of rolling their chairs over both the speaker and remote wires, as is the case in my office. The feeling of confidence is further enhanced when you lift the subwoofer out of the box. The sub features three drivers positioned at the front, left and right, to ensure that no matter where you place it, you won’t obscure the output. Just like the GigaWorks T20s and T40s, the T3s look and feel a cut above your average PC speaker set, which is no bad thing.


The best news is that as well as good looks and solid build, these speakers also sound great. As already mentioned, many 2.1-channel speaker sets tend to lack cohesion, with the bass clearly separated from the rest of the sound. The T3s on the other hand, have a wonderfully cohesive sound, so cohesive in fact, that it’s barely discernable that the low frequency portion of the music is coming from a sub, as opposed to a pair of full range speakers. The satellites manage to convey an incredible degree of clarity and detail, while the subwoofer just fills in with rich, but in no way overpowering bass. 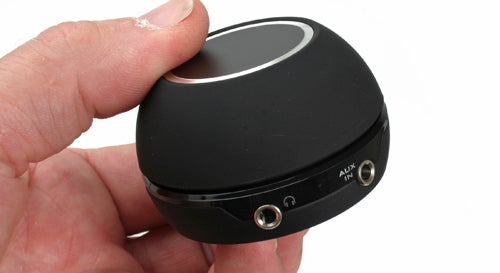 I ended up instigating an afternoon of Eighties nostalgia in the office while testing the T3s, which resulted in some cringe worthy selections from myself and the rest of the team. The whole thing was kicked off by Eye Of The Tiger by Survivor – I’m blaming Dean Winchester and Supernatural for that situation, and if you watch the show you’ll know exactly why. What’s surprising is how good the old Rocky III theme sounded on the T3s – yes it’s cheesy 80s dross, but those guitar riffs and wailing vocals got everyone in the office singing along. Isn’t it funny how everyone denies that they like a song like that, yet they all know the words?

The T3s coped just as well with jazz. Stanley Jordan’s delicate melodies were beautifully rendered, with each, expertly picked string as clear as the last. Likewise, Stacey Kent’s angelic rendition of What A Wonderful World was reproduced with a surprising amount of detail and clarity, without sounding harsh, as songs with a distinct lack of bass sometimes can. Meanwhile pop classics like Michael Jackson’s Billie Jean had all the presence, musicality and downright soul that you’d ever want or need from desktop speakers. 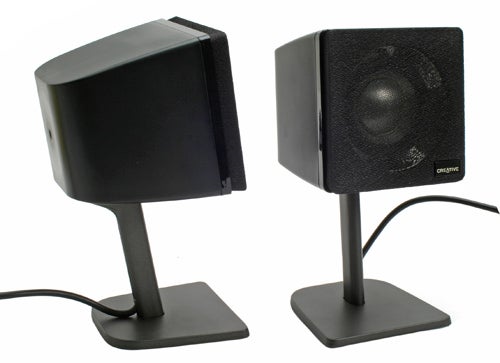 The GigaWorks T3s performed equally well when watching video content, producing a convincingly directional soundstage for effects, and of course, doing a fine job of reproducing movie scores and soundtracks. Likewise, they lend themselves well to gaming, although I would opt to plug a set of headphones into the output on the remote control more often than not.


Basically, Creative has produced a set of 2.1-channel PC speakers that excel at music playback, which is pretty much exactly what I want from the speakers on my desk. I’d even go as far as saying that Creative has managed to dethrone the Acoustic Energy Aego M 2.1-channel package that impressed us so much back in 2006. Of course it’s worth remembering that these are PC speakers, and a decent amplifier married to a reasonable set of speakers will obvious eclipse the T3s. In fact, you don’t even need t go that far, since B&W’s truly superb Zeppelin iPod dock will provide all the high fidelity sound that most people would ever need. 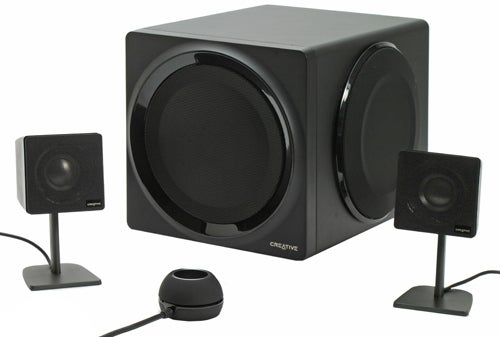 Of course it’s worth remembering that a decent amp and speakers is going to cost you a considerable amount of money, while even the B&W Zeppelin will set you back nearly £400. By contrast Creative is launching the GigaWorks T3s at a very reasonable £160, and once these speakers hit the channel you can expect to see street prices even lower. Of course the Accoustic Energy Aego Ms can still be found for around £100, so they’re definitely worth considering if you can’t stretch to the T3s – although the Aego Ms don’t come with the desktop control module. If you can afford the T3s however, Creative’s latest addition to the GigaWorks range is worth every penny.


I was admittedly worried when Creative announced these 2.1-channel speakers under the GigaWorks brand, but I needn’t have been. Like the GigaWorks T20s and T40s, the T3s are excellent PC speakers, aimed squarely at those who like to listen to music while they work. Yes, a proper Hi-Fi will eclipse the T3s, but that’s not the point. What you’re getting is an easy to use, good looking, great sounding and well featured 2.1-channel speaker set at an attractive price – well done Creative!