Creative has been doing itself proud as of late with a steady supply of top notch 2.0 speaker sets leaving its doors. First were the T20s that ran away with an Editors Choice Award last year, then their bigger brother the T40s earned themselves a Recommended Award a few months later, and just a couple of weeks ago the T10s were also given a solid 8/10 score. However, with the T10s we assumed that must’ve been the end of things as Creative had covered all the obvious price brackets for a 2.0 set, from £30 all the way up to £100, because surely no one would pay much more for a small 2.0 set without opting for a proper hi-fi?


Well, obviously just to spite us, Creative decided to prove us wrong and last week announced a new addition to its Gigaworks sub-brand, the HD50s. And, rubbing salt into our already throbbing wounds, this new set is not only more expensive than the T40s, with a list price of £107.90, but also smaller – considerably so. These speakers are tiny! 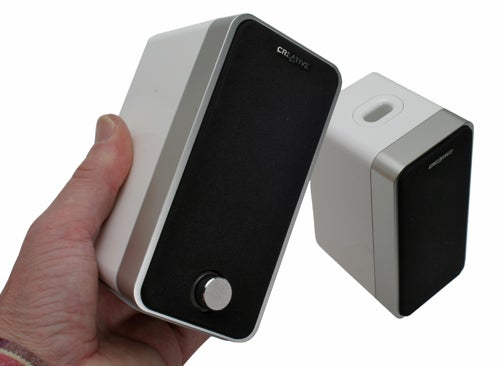 Measuring just 140 x 70 x 83 mm, they’re dwarfed by even the most modest of computer speakers and you must have some serious space issues if these won’t fit comfortably on your desk. At first this would seem to make them an ideal accompaniment to your mobile workspace but these are mains speakers and the extra cordage and power brick doesn’t exactly make them ultra portable, so they’re still best staying put when you’re working on the move, but they’d make for a great holiday speaker.


As well as endearing with their petite figures, the HD50s finish the job with their stellar looks, leaving anyone with a modicum of appreciation for good design dribbling with anticipation. The body of each speaker is finished in a gloss white plastic that is simply fantastic and beautifully set off by the silver fronts. The pièce de résistance, though, are the cute little removable grills that are held in place by six tiny magnets. On, the sheer black is in perfect contrast to the white and silver behind, and off, the trio of silver speakers, surround, and allan bolts creates a chic industrial feel – think exposed brick in an otherwise super modern home. 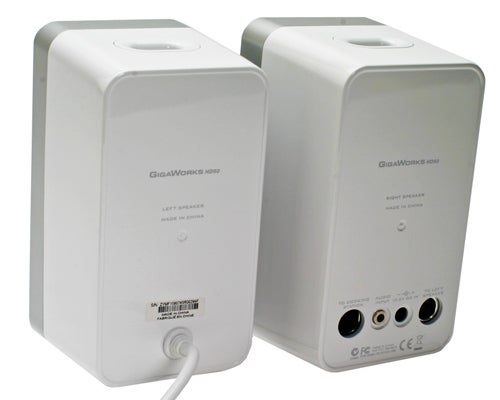 On the front of the right speaker is a single volume knob with incorporated power switch that is encircled by a blue glowing ring. There are no tone controls so you’ll have to rely on your computer or PMP to set your desired sound. Also, like the T40s, the HD50s have dropped the additional line-in socket that we so liked on the T20s and replaced it with a dock connection for use with their range of docking stations. This is something we aren’t particularly enamoured with as it’s useful to be able to quickly plug in your player and listen to music without turning your computer on or unplugging other cables. It’s more excusable on these tiny speakers than the enormous T40s but it’s still a bit of a shame.

Each speaker houses two drivers in the front, as well as a bass port exiting out the top, and as you’d expect the upper and lower frequencies are split between the two. However, and this is where the large part of the high cost comes in, the HD50s don’t just use a passive crossover to control how the audio signal is split, they actually use two separate amps for each type of driver.


The reasons for doing this should be obvious but for those of you not familiar with audiophile technobabble I’ll explain a bit further. Basically, dedicating an amp to a single type of driver enables it to be optimized to get the best out of it without compromising fidelity on other drivers. So, for instance, if a song has a strong, punchy bassline, the low frequency amp can busy itself providing enough power to keep things pumping, leaving the upper frequency amp to pick out the details undisturbed. The result is a much tighter sound that shouldn’t become strained and muffled no matter how much you crank the volume. 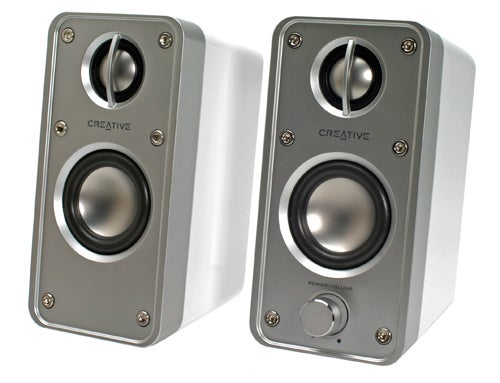 Accompanying these improvements in circuitry, the cones used in each driver are also made from super lightweight and rigid titanium, so the audio signal is given the best chance of transitioning from electron to airwave, noise free.


Of course, all these behind the scenes improvements would be moot were the HD50s not to sound good. So, it’s a relief to be able to report that that indeed they do. In fact, at times they can sound quite incredible. Unfortunately, at other times, they simply don’t cut the mustard. 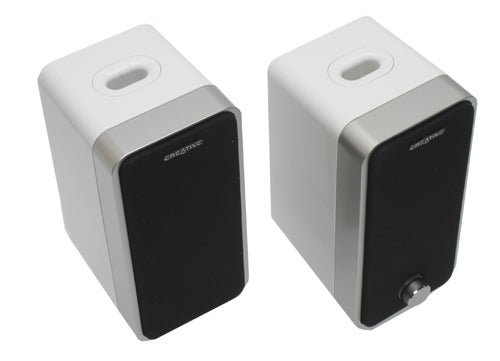 In terms of sheer clarity they are probably without equal for such small self contained units. Classical, acoustic, and jazz, sounds simply sublime with the most open, airy, balanced and convincing soundscape I’ve heard from a set of computer speakers. The effect is particularly pronounced because larger speakers lend themselves to being heard from a distance – sit back a couple of metres from the T20s or the T40s and they sound superb but up close they can sound flat. A quick session of Miles Davis from his classic Kind of Blue album perfectly highlights these differences with the piano, trumpet, double bass, and drums all sounding distinct and perfectly placed. So good are the HD50s, I may even learn to like Jazz at this rate.

However, it’s not all rosy and as soon as you throw anything with a bit of bass at them, the HD50s struggle to convince. For Pop, Rock, Indie and even Heavy Metal this isn’t too much of a problem as these genres can be carried along by the guitar/piano/vocals/percussion as rendered by the upper and mid-ranges. Indeed, the volume the HD50s can reach does loud tracks plenty of justice. Dance, though, simply isn’t an option. Trying out a few tracks from Evil Nine’s Fabriclive.28 session, the stark, pumping, electronic kick drum that drives the music along is simply none existent, leaving it largely unlistenable. So, unlike their bigger brothers, the HD50s would be useless for a bit of background party music.


Of course, this was particularly obvious while reviewing them as I was regularly switching between other speakers that could provide much more bass. However, with extended isolated listening the HD50’s light and precise sound does actually grow on you and I happily sat through every track that came up when listening to my randomised music collection. From Oasis to Napalm Death, all the tracks were crystal clear with a beautifully even sound that I’d be happy to hear everyday.


And, this really is the point; if you want an all-round set of speakers that you can crank up when having a few friends round, or to sit back and watch a movie on your computer screen, the HD50s are not up to the job. On the other hand, if you just want a set for your desk that you’ll only ever listen to while sat up close and personal and with which you don’t want to disturb the neighbours/baby, you can’t get much better than the HD50s and I would recommend them. 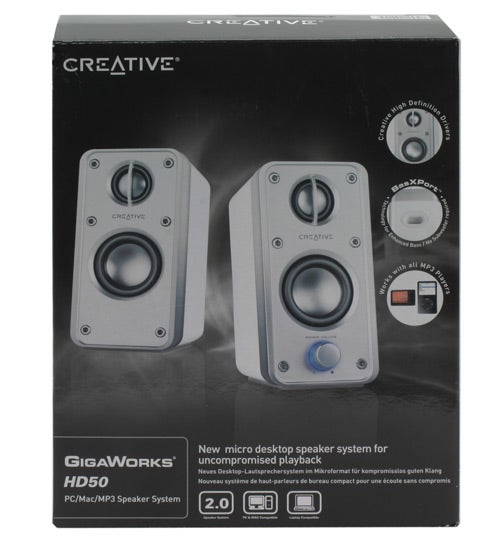 To finish things of I had a quick gaming session and was actually pleasantly surprised. In fact, ironically, it was the lack of bass that actually made the HD50s a good choice for gaming, especially on a competitive level. The clarity of sound effects and voices makes placing yourself and your competitors in the virtual world all the easier. Other speakers that can deliver booming explosions and rumbling atmospherics may immerse you more in the game overall but vocals and the subtle noise of nearby footsteps or far off gun fire is much more discernible with the HD50s.


The Creative Gigaworks HD50 2.0 speakers are petite little beauties to behold and they sound every bit as good as they look. However, that small design does leave them very much lacking in the old bass department and for such a high price this will probably prove a deciding factor for many.