If there’s one thing I’ve learned over the years, it’s that as much as I may enjoy playing games and watching films well into the small hours of the morning it’s that fellow residents, and sometimes nearby neighbours, aren’t always so appreciative. As great, then, as having a decent surround sound speaker setup cranked up to the max is, it’s a fact of every PC (or, indeed console) gamer’s life that a decent headset is one of those must haves.


There are, as common sense might suggest, two options. The former, and most obvious, is a simple stereo headset, such as the SteelSeries Siberia which as our review testifies was pretty nifty. The second category comprises devices such as the Saitek Cyborg that offer a virtual 5.1 surround sound from the two available speakers. As the Cyborg headset proved though, this can have mixed results. 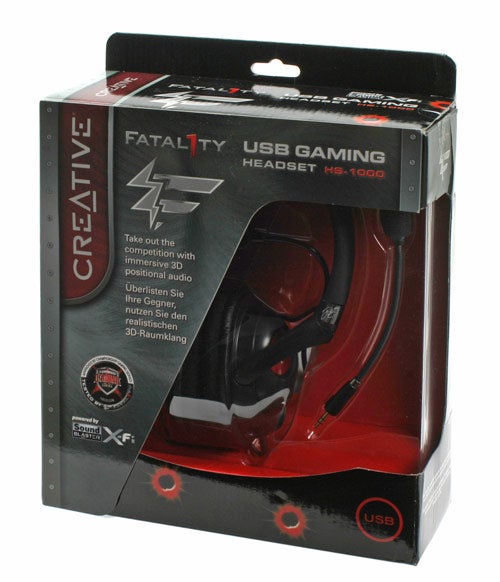 If there was a company positioned to make and pair of virtual surround sound headphones and get it right, Creative is probably it. Creative has some real badge cache in the audio arena, with excellent products like the X-Fi Titanium Fatal1ty Pro sound card and Auvana X-Fi headphones backing up that reputation. To that end, the Fatal1ty HS-1000 gaming headset should be pretty good. Especially as Creative claims to reserve Jonathan “Fatal1ty” Wendel’s branding for the crème de la crème of its products. 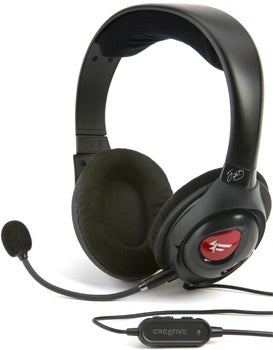 Superficially the Fatal1ty gaming headset sets off on the right foot. The Fatal1ty branding is kept pretty low key, and there’s no Razer Piranha-esque glowing LEDs, for instance. One trait the Fatal1ty headset does share with the Piranha, though, is the overabundance of pressure. I wouldn’t consider my head to be particularly large, but wearing the headset for too long caused enough discomfort that I simply had to remove it for 15 minutes or so before being able to use it again – and too long equated to about an hour of use. Some might argue that such enforced breaks are a good idea, but I’d rather not try playing Left4Dead with throbbing ears. It’s an intense enough game as it is without adding pain to the mix!


On the plus side, design-wise, the removable microphone plugs in as securely as could be asked and is nicely flexible, without feeling flimsy. The USB cable for attaching the headset to a PC is of a decent length, too and sports an in-line remote offering volume buttons and a microphone mute switch. This also has a clip on the back, so it can be attached to, say, a belt ensuring it can be easily located while also reducing cable tug on the head.

One potential stumbling block for the Fatal1ty headset is its use of USB, as opposed to 3.5mm jack, for connectivity. For the majority of buyers, that’s a good thing as the headset packs an in-line sound card which takes care of everything a dedicated card would otherwise be required for, such as virtual 5.1-channel and EAX effects. However, anyone already owning a dedicated sound card will doubtless be a bit miffed that it is bypassed when using the Fatal1ty headset.


Overall at the price point the Creative Fatal1ty headset is hitting, around £45 at time of publishing, it’s hard to complain about the inclusion of what is, as we’ll come to later, a pretty decent sound card. It’s not like finding an alternative headset is difficult for those with dedicated sound cards. 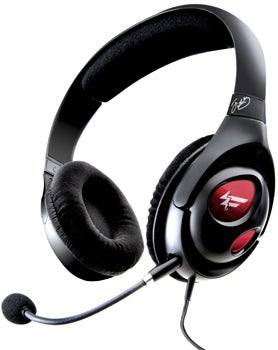 On the subject of the non-requirement for a dedicated sound card, then, Creative deserves a great deal of credit for the driver and software package it provided with the Fatal1ty headset. Features such as the X-Fi Crystallizer, which adds (as best it can) detail into compressed audio, CMSS-3D, which offers virtual surround sound, and Creative ALchemy which enables reproduction of DirectSound effects (something that’s no longer supported by DirectX 10). Not to mention supporting EAX effects in games which use them – many do.


Although not as good as a dedicated Creative sound card could produce, the Crystallizer still did a decent job of improving a selection of Napster tracks. Obviously as with all similar solutions there’s a limit to how much better compressed music can be made to sound, but Creative’s effort is among the best. Obviously the Fatal1ty headset isn’t designed for listening to music, and I certainly wouldn’t recommend it for that, but for occasional listening or background listening while playing a few rounds of Counter-Strike, its definitely good enough. 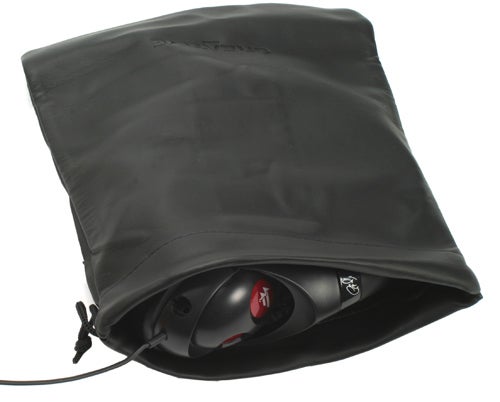 Gaming performance lives up to Creative’s reputation. There’s a decent amount of bass which is obviously great when a few grenades start flying around and helicopters are soaring overhead. The removable microphone lives up to its noise-cancelling pretensions too, with nary a complaint from several friends using both in-game chat in Left4Dead and firing up Windows Live Messenger voice chat, too.


CMSS-3D, too, is by far and away the best virtual surround system I’ve ever used. The result was far better than that achieved by the Saitek Cyborg. Creative’s support for effects such as EAX and DirectSound allows its products to beat out the competition in this area. I had almost forgotten, having become used to stereo speakers, how tense Bioshock can be!


I still prefer using stereo headphones in stereo mode, and surround sound speakers for surround sound, but if you simply must have virtual surround effects from a headset then I can’t think of a better alternative to the Fatal1ty. Without using a dedicated sound card of course, but that’s beside the point.


Creative has a long reputation for producing great audio equipment and the Fatal1ty Gaming Headset HS-1000 doesn’t let down that legacy. Thanks to Creative’s excellent back-end support the Fatal1ty is definitely the only virtual surround sound headset worth considering.