If your office is anything like ours, you’ll be well acquainted with the desire to shut everything out every now and again. A decent set of noise-isolating earphones is a good tool to aid in shutting out the world, but sometimes mere isolation isn’t enough, sometimes you need noise-cancelling earphones, just like the Creative EP-3NC.

It’s worth noting that, unlike some noise-cancelling ‘phones, the EP-3NC will work just fine unpowered, so should the battery die you can still listen to music. Less good is the placement of the dongle. At least for me there wasn’t quite enough cable above it to allow clipping it onto my belt – I guess that’s what I get for having the tenacity to grow to 6ft tall.


Another small issue with the EP-3NC cable is the thickness of the section above the dongle. This can be annoying because, as a result of being quite chunky, it is also fairly inflexible, and tends to ‘remember’ its position of been coiled up in a pocket, which can be irritating – although it’s not an actual problem, as such. 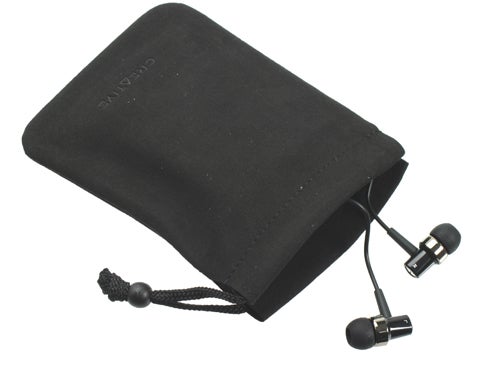 The dongle holding all of the electronics that perform this technical magic are located about half way down the EP-3NC cable. Power comes from an AAA battery, which Creative claims will last for 100 hours of listening. In a generous touch, this is supplied alongside more usual extras, namely a carrying case and a set of different size silicone tips.


The dongle features a clip, so it can be attached to any available item of clothing to save its weight being hung from your ears, as well as an on/off switch and a “monitor” button, which mutes the earphones and enables external sound to be heard. Although frankly it’s probably easier just to remove one earpiece of you want to talk to someone. 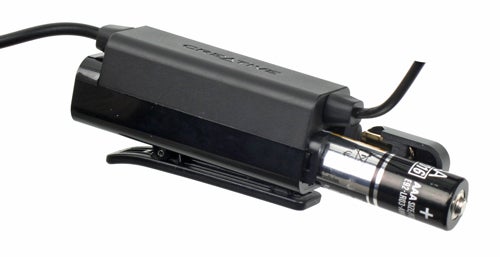 The EP-3NC claim “up to 90 per cent” noise suppression – significant by anyone’s standards. This is accomplished through the use of microphones built into the ear pieces, which pick up external noise. This sound then has its phase inverted and is mixed into the earphones’ input signal.


In theory this should suppress most external sound. In practice the system works best – as is typically the case – with constant background noise, such as the drone of an aeroplane’s engines, the humming of a computer fan, or tyre noise in a car (as a passenger, not a driver, obviously).

Common background noises such as typing or conversations between colleagues aren’t attenuated quite as effectively. However, the dampening is better than any passive system and all it takes is to start playing some audio and it’s enough that anything short of someone shouting directly at you will go by unnoticed.

Inevitably the addition of active noise-cancelling tech means the EP-3NC aren’t cheap, but nor is the £90 asking price extortionate. The same amount of money would net you a set of Creative’s own Aurvana In-Ear2 headphones and I don’t think anyone could argue that the EP-3NC look or feel as nice. However, you only have to work in as noisy an office as the TR headquarters to be convinced that there are times when being able to more completely shut out the world is a definite good thing.

What is also particularly good is that as a result of the great noise isolation, you can keep the EP-3NC at lesser volumes than similar ‘phones. I don’t know about you, but I’ll take all the help I can get reducing damage to my delicate eardrums.


It has to be admitted, though, that the outright quality of the EP-3NC’s audio reproduction might leave you wanting a little. There isn’t the same detail resolution or warmth as similarly priced earphones or even cheaper ones – the Klipsch Image S4’s would give these a run for their money, were it not for their noise-cancelling prowess.

Up against the Etymotic Research hf2, for example, there’s no competition on a quality basis, but you’ll have to spend another £90 on custom tips to get the hf2’s noise-isolation anything like on par with the EP-3NC.


It’s not a particularly revelatory conclusion to draw, that a set of noise-cancelling earphones excel where the listening environment has a lot of noise that could do with being cancelled. It’s good news for the EP-3NC, though, because it means they do indeed fulfil their intended function and performance in every other respect is entirely adequate.