We know the feeling. You have your eyes on a Creative ZiiSound D5 speaker, with its fancy Bluetooth wireless connectivity, but find the cost prohibitive and would happily trade a little sound and build quality for a lower price. And wouldn’t you now it, Creative has thought of you, hence the D200 speaker. 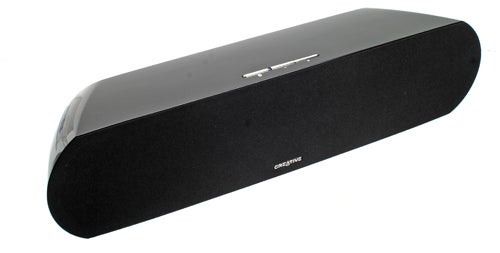 At around £75 it’s reasonably affordable, and although it doesn’t have fancy features like a dock for charging your iPod, it is still a decently attractive product, and offers the same Bluetooth wireless, making it a good solution for those who don’t like having to leave their music player physically connected to a speaker system.


The design certainly won’t win any awards for originality – it’s a speaker dock without the dock, what do you expect? – but we think the combination of glossy black plastic body, with a plain black mesh covering at the front, will fit into most homes without issue. And the construction is solid enough not to leave us with any concerns – the D200 feels like a speaker that will last as long as you care you keep it. For those times when connecting a player via Bluetooth isn’t possible, the rear-placed aux input will prove handy.

The only thing we don’t like is the volume control, which has one rocker button, as opposed to separate up and down controls, but that’s a minor complaint. The prominent Bluetooth connect button and status LED is well-placed next the volume control; a green light indication the system is powered on, a flashing blue light informing you that it’s searching for a device, and a solid blue light indicating one is connected – no surprises there.


Unsurprisingly the Bluetooth adaptor in the D200 supports the A2DP standard, affording much better audio quality that older Bluetooth speaker systems could offer. However, it’s not as good as the apt-X codec supported by the ZiiSound D5. Given the lower price, and lesser components, of the D200, however, we’ve no complains about the decision. And the plus side is that you don’t need an adaptor for the D200, which was an annoyance of the D5.

What we almost lament, however, is the lack of any way for the D200 to charge your music player. But, given the price, it’s far from a deal breaker, and besides, with a Bluetooth speaker there’s no need to have the player anywhere near it, so you can plug it into a charger and keep playing music should you need to.

The sound quality offered by the D200 is surprisingly good. It has a powerful output for its size, with enough ‘oomph’ to fill a bedroom, and no noticeable distortion with the volume turned up. Chuck on some Foo Fighters and Dave Grohl’s vocals will bellow out with appropriate gusto, although big dramatic pieces, such as the ever-popular Ride of the Valkyries, lose some of their impact coming from such a small system; the low end doesn’t fill out amazingly, but that’s to be expected of what is a fairly compact system.


The D200 does a decent job of handling more delicate pieces, too. Peter Gregson’s delightful cello work on Terminal maintained as much detail and poise as can be hoped coming from a £75 Bluetooth speaker. Playing an losslessly encoded version of Peter Gabriel’s Scratch my Back proved a little pointless, as A2DP Bluetooth just doesn’t offer enough bandwidth to get any benefit from high-bitrate music. But the rendition was nonetheless enjoyable.

Anything you’d really want to just sit and listen to – say, the likes of Band of Horses, David Bowie, and Frou Frou – deserves better treatment that the D200 can offer; but if budget precludes that, or you only listen to music in the background, you could definitely do worse. If you’re happy with ‘good enough’ music, then the D200 won’t disappoint.


The Creative D200 speaker makes a number of compromises compared to the more expensive ZiiSound D5 to reach its much lower price, but they’re all fair trade-offs. The build quality is definitely acceptable, the lack of a dock connector isn’t too big an issue and audio quality isn’t amazing, but is good enough.