“Timeless sophistication. Exceptional audio” is the tagline. Well, on one level, Creative’s latest Aurvana earphones are an unqualified success. Awarded a prestigious Red Dot award for Product Design this year, the Aurvana Airs are easily one of the most beautifully crafted and engineered sets of earphones you’ve ever set eyes on – and Creative knows it. The packaging literally places them on a pedestal inside a transparent acrylic case inside the box, and the whole thing screams “look at me! I’m a work of art!”


Even once you’ve managed to wrestle the headphones out of this complicated assembly, it’s hard not to feel impressed. Those delicate features! Those lovingly constructed hinges! Those gorgeous reflective surfaces! That shiny gunmetal and gold-played plug! These are headphones so damnably attractive, that you almost can’t bear to stick them in your horrid, unclean, wax-stuffed ear holes. Perhaps it would be better just to put them on the shelf and quietly admire them. 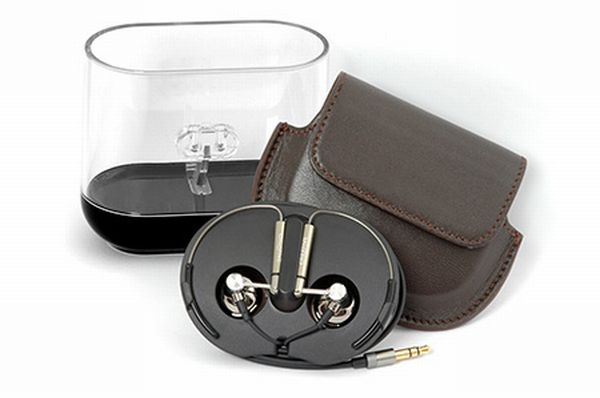 However, that’s not what I’m paid for. After all, for all their supermodel looks, the Aurvana Airs are here to be worn and listened to, so that’s just what I’ve had to do. The AAs (to save my typing fingers) use the earhook design popular with sports headphones (though heaven forbid anyone should wear them jogging, mountain biking or lifting weights and walking the treadmill at the gym – have you no soul?).The earpieces connect via a hinged armature to a cylindrical chunk of polished metal, and this in turn connects to a hook of a flexible nickel-titanium alloy, which is what you call a ‘shape memory metal’, with a rubbery plastic sleeve coating the end.


This means that you can bend the earhook six ways to Sunday and it won’t go out of shape, making it springy, robust and comfortable. The alloy construction is resistant to dirt and corrosion, and the inert coating should – apparently – make sure that those with a sensitivity to nickel don’t get any nasty side effects from use. It’s a common cause of contact dermatitis (or a nasty rash), don’t you know.


For all their shimmering delicate loveliness, Creative has produced a well-considered, practical pair of earphones here. At first, I thought I would struggle to get a comfortable fit on my embarrassingly miniscule ears, but by fitting the large-ish earpieces in position then sliding the earhooks round, it was possible to get a good firm fit that would easily stand up to a bit of light exercise. The usual trouble spots, like the connections between cable and plug and cable and earpiece, are solidly reinforced and the cable is nice and meaty.

Cable noise isn’t such an issue with this sort of earphone as it is with a canalphone or IEM, but the AA’s cable has, I’m told, been manufactured with a thermoplastic elastomer coasting to minimise that effect, and tangling. There’s a little handling noise, but nothing that will seriously affect your everyday use. At 1.2m the cable is a sensible working length, and there’s a handy slider you can use to tailor the amount of loose wire hanging between your ears and the Y-junction below.


At first I was concerned that the posy presentation box the AAs come in was actually supposed to be a travel case, but luckily there is a second, more practical leather wallet containing a plastic holder for the earphones with space to wind the cable around the outside. Otherwise, with no tips or cleaners to worry about, the only other bundled accessories are a couple of pairs of foam earpads, for those who don’t like the feel of the naked earpiece in their ears. 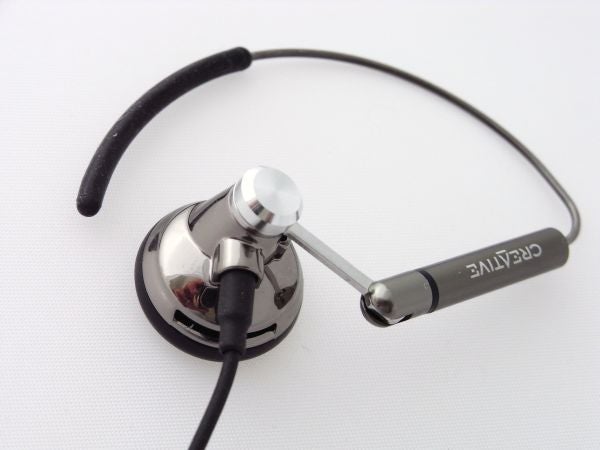 I’ll be honest. I really wasn’t sure what to expect from the AAs sound wise. Creative likes to talk about a ‘visceral audio performance’, and point to the 15.5mm neodymium drivers and acoustically-tuned bass slots, not to mention a high-purity OFC cable, as signs that these are more capable than your average sports earphones.


The 20Hz to 20KHz frequency response would suggest that the AAs have a bit more low-end depth than some rival models, but not to any great degree, and with a 32Ω impedance and a sensitivity of 102dB/mW at 1KHz these aren’t incredibly sensitive earphones, but at this price point you should really expect something special. Can the AAs deliver on the ‘exceptional audio’ part of their promise?


Not really. Decent? Yes. Exceptional. No. I could be wrong, but I think Creative was trying to give the Aurvana Airs some of the characteristics of a pair of open-back, supra-aural headphones in a highly portable form. If so, it hasn’t quite worked. The Creatives have their strengths, but at heart they suffer from the deficiencies of most conventional earbud designs.


There’s a lot of clarity and definition at the top end and performance in the mid-range isn’t bad. What’s more, there is some bass, and it’s actually quite crisp, precise and tight. The problem is that it isn’t deep or warm or powerful, and this leaves the sound with a lot of material a bit top-end heavy.

This is apparent with music played through Creative’s own Zen MX player or an iPod touch, but you can also hear it with a stronger source, like an iBasso D2 operating as a USB DAC/headphone amp. On the plus side, the lightweight signature gives pop tracks like Justin Timberlake’s LoveStoned or Take That’s Greatest Day some real punch and energy, and there’s plenty of scope to appreciate the detail in glossy, high-end productions.


Listen to Rilo Kiley’s Under the Blacklight, and there’s lots of nuance and tone in the vocals, and the guitars chime and shimmer, but when the bassline dives low, it gets slightly lost in the mix. The synth and vocal textures in the Prefuse 73 remix of Via Tania’s Drift Away are pristine and beautiful, but without a thick bass the sound loses its warmth.


Forget about anything that needs a powerful bass to work. Help Somebody, from Maxwell’s new R&B opus, BLACKSummer’s night, sounds just too thin to be funky, While DJ Shadow’s Fixed Income is – bluntly – a bit of a battering for the eardrums, the snare drums a bit too dominant in the mix. Nor are the AAs ideal for rock. Mastodon’s Divinations fell pretty much flat, and the rolling bar-room rock of The Hold Steady’s Stay Positive is all detail, no raucous presence. 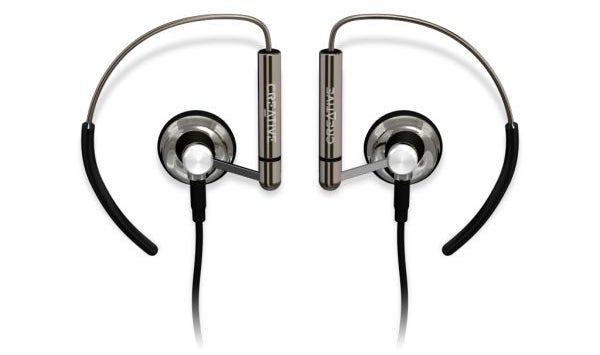 The AAs fare better with more acoustic or folky music, lighter classical music and small group jazz, where that lovely crystalline high-end gets a chance to shine and basslines don’t have such a crowded mix to get lost in, but as all-rounders the AAs aren’t the best headphones I’ve heard. Nor is the soundstage as expansive as you’d expect from, say, a half-decent pair of over-the-ear headphones.


And this is all serious stuff, because at £169.95 (exclusive to Creative’s online store), you’ve got a right to expect exceptional audio as well as exceptional design. As it is, at this price point Creative is going up against such big hitters as the Klipsch Custom 3s and Image X10s, not to mention Sennheiser’s IE7s and IE8s and the Shure SE420s. Of course, not everyone finds an IEM comfortable, while full-sized ‘phones aren’t so ideal for active use. Given that, the AAs might find some takers, but I’d personally be tempted to buy a cheaper pair of sports earphones for exercise and, say, a pair of Grado SR80s or Audio Technica ATH-AD500s for home.


It’s a shame. I want to love the Aurvana Airs, and I’m even willing to ignore the fact that they don’t provide any noise isolation to speak of (making use on public transport a bit of a no-no). They’re gorgeous looking, comfortable and well constructed, and I can’t say enough how good they are for crisp, clear detail. Were the Aurvana Airs £100 or less, I’d probably be more willing to big them up. However, at the price they are, they really needed to deliver a more convincing all-round performance, sonically. If only they were as beautiful to listen to as they are to look at… oh well. I guess that’s asking a bit too much.


Stunning looks and superb engineering, but the sound isn’t quite in the same league. Given the high price you could do better.