The Audigy Pro 4 is almost certainly the last of the Audigy line and represents an incremental change from Creative’s previous Audigy cards. The card is a refinement of the technology Creative has been developing over the past few years aimed at creating features that balance leading-edge game audio technology with music creation capabilities. The Audigy 4 is not a card to tempt existing Audigy owners, for that Creative has its X-Fi based cards close to release, but it is a strong package both in terms of hardware and software.


Creative’s website has a comparison chart detailing the differences between the Audigy 4 and previous cards, the only difference listed compared to the Audigy 2 ZS is the signal to noise ratio, with an extra 6dB, due to the new professional quality Cirrus Logic DAC CS4398 chips. Sound quality is obviously rather important in sound cards but for a card that is probably more attractive to gamers who happen to dabble in music production, you’ll have to decide whether this is worth the extra £30 or so.


It takes a bit of a stretch of imagination to consider this card as a whole generation above the 2s. Presumably using the numeral 4 was a marketing decision, looking on the board itself reveals the model number to be SB0380 where my Audigy 2 has the model number SB0240. Obviously the number three is so last year. 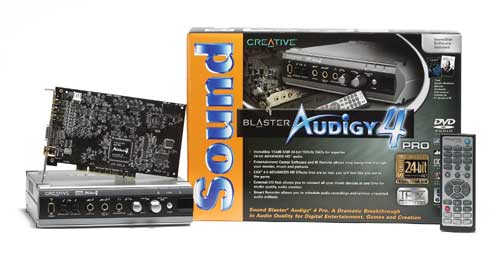 A quick run down of the specifications includes 64 hardware 3D voices for games that like to pile on the noises. EAX Advanced HD (EAX 4) for multiple environmental effects, up to 7.1 speaker set up and the stereo ‘enhancement’ technology, CMSS. For the musician, there’s ASIO support for low-latency, three audio inputs and SPDIF as well as optical digital in and out connections. There’s also Creative’s own digital connection to communicate with its range of digital speakers.


The break out box is the same as with the Audigy 2 ZS Pro, decently built and rather large. Included in the package is a remote control for the Creative Entertainment Centre application (this can also be used with WinDVD and PowerDVD0. The software includes Cubase LE (a slightly nobbled version of Cubase SL 1), Fruity Loops Studio 4 Creative Edition, Wavestudio Lite and the games Hitman Contracts and Thief: Deadly Shadows. This is a generous offer, even if the music applications are all cut-down versions. There’s enough here to entertain and to be creative with, I hardly need to mention that the card has the infamous 48kHz clock rate, not so problematic for games but music applications using the low-latency ASIO drivers are fixed to either 48kHz or 96kHz.

If we take a look at the figures, there’s a clear gain in the dynamic range of the new card, courtesy of the change in chipset, all tests used Right Mark Audio Analyzer 5.5 using the loop back test, all inputs were muted. 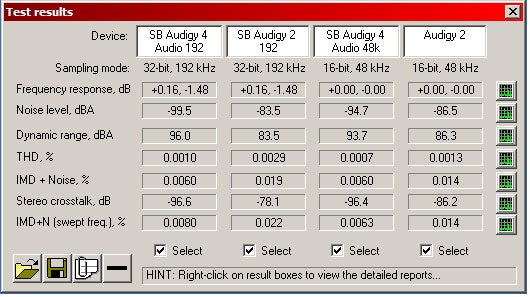 The largest difference appears during the 192kHz test with the Audigy 4 putting in a very good showing. At 48kHz, the card also performs as expected, indeed slightly more than the stated 6dB improvement.


Creative claims a figure of 113dB SNR for the Audigy 4 but as I’ve mentioned in previous reviews, these figures are unlikely to be found in the wild. I also like to use a very informal test by observing the noise generated by cards as viewed by the meter level in an audio editing package such as Adobe Audition. For my money this is much closer to a real world test.


For comparison, my Emu 1212m card (which despite being a Creative company uses a completely different chipset) hovers at around -84dB, an older M-Audio Delta 44 gives me -78dB and the Audigy 4 gives me a very steady -81dB, a most respectable figure. 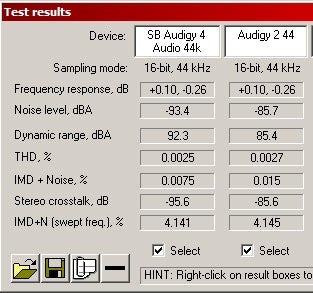 The IMD and noise percentage is very high when testing at 44kHz due to the re-sampling and audio artefacts found in the audio signal due to the processing. Whole audiophile wars have been fought over whether these artefacts can be heard. It’s safe to say that if you’re of the persuasion where this is important to you, you’ll most likely not be buying a card like the Audigy anyway, but rather one focused only on audio production.

The Creative Entertainment Centre is an evolution of software that Creative has been developing for a while, enabling the PC to be controlled via a small handset. The current iteration has obviously been inspired by Windows Media Center and is clearly laid out for display on a television. Music, video, photos and Powerpoint presentations can all be controlled remotely in a design that is clean and functional. 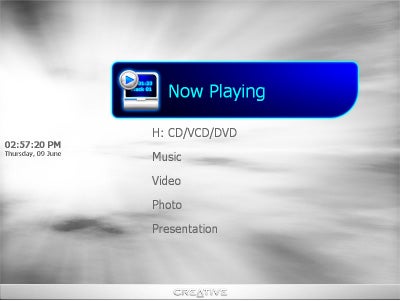 There’s much to like about the Entertainment Centre, but it needs maturing and the quirks need ironing out. There’s too much inconsistency in the controls, video is stretched to fill the screen making it useless for widescreen recordings and photos look blurred due to the scaling algorithm.


The Audigy 4 Pro is a very good all round card with the limitations well-known by now. As an all-in-one solution for DVD viewing, surround sound, heavy gaming and audio applications, it’s a respectable conclusion to the Audigy line. The progress in audio quality, while subjective, is also appreciated and this must be the factor against which the extra cost of this card, compared to the older cards, is finally weighed.