Introduction
These days, many people use a smartphone as their main music player. However, back when you were lucky if your phone had a colour screen, dedicated players like the Cowon X9 were big business. Now Cowon has to aim squarely at the audio enthusiast crowd to stay afloat. Consequently, sound quality is great but the X9 does feel a little expensive, and dated in parts.

Cowon X9 Design
Cowon’s players are often on the chunky side. The Cowon A5 was positively gargantuan, but thankfully the latest Cowon X9 PMP has slimmed down a little from that blueprint. It’s around as thick as an iPod Classic, and a little larger thanks to the 4.3-inch screen. 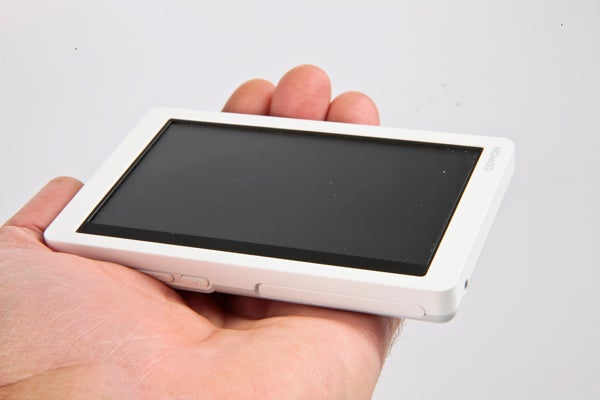 However, like the A5, the Cowon X9 still feels ungainly as – unlike the elder statesman iPod – this is a solid state memory gadget rather than a hard drive player. The 16GB (32GB also available) of internal memory here needn’t take up more space than a thumbnail, so there’s no real excuse for the chunk factor. Thanks to the generous bezel, it’s almost as wide as a Samsung Galaxy S3 too, which will be too large for smaller hands to hold comfortably. 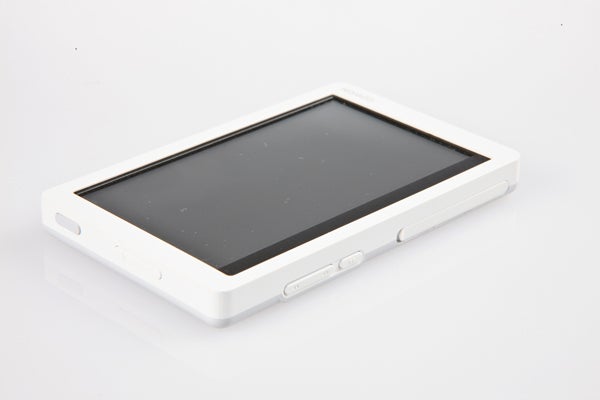 Aside from the dimensions, the Cowon X9 player is reasonably attractive-looking. Its body is all-plastic, but the white of the front and edges combined with the muted grey of the rear provide a relaxed look that has a clear sense of style. Cowon says it “expresses refinement and comfortability”, which is not only over-egging it a bit, but actually doesn’t make sense. However, its intentions aren’t too far off the results.

Cowon X9 Features
The Cowon X9 brings a feature or two you won’t find in every touchscreen-operated media player. It has physical playback buttons on the left edge, controlling which track plays, and acting as play/pause controls. Unfortunately, Cowon didn’t think to include a hold switch on the body, making accidental presses of these buttons a bit too easy.

Alongside these buttons is a plastic flap that hides the microSD memory card slot and the proprietary charge connector, which looks uncannily like a miniHDMI slot. It’s not one, however, and while a composite video output cable is available, it doesn’t come with the player. 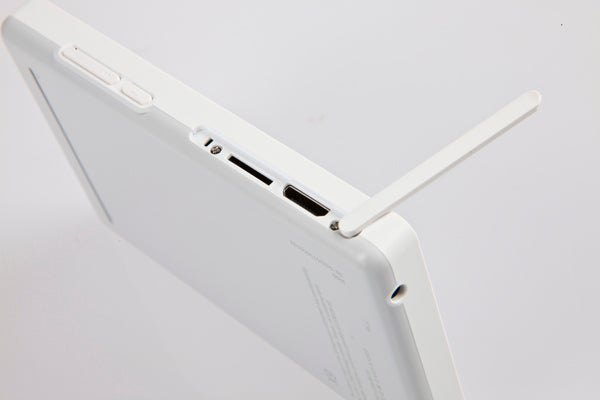 The Cowon X9 connectivity options are surprisingly poor, all told. There’s no Bluetooth, ruling-out being able to use wireless headphones, no Wi-Fi and no GPS. The one extra hardware bit is a G-sensor, which can tell the angle the device is being held at. But as it’s only useful in the one pre-installed game, we’d have rather had almost anything else. 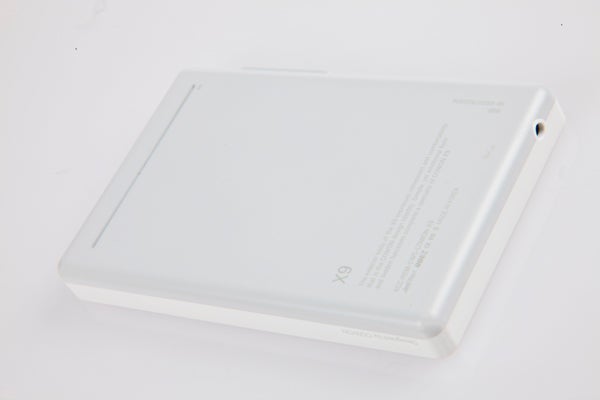 Like an iPod touch, the Cowon X9 has an inbuilt speaker on the rear, letting you play music without headphones. However, it is poor. It distorts way before reaching top volume and offers crude sound quality. Hardware-wise, the Cowon X9 is a disappointment. For a device as expensive and large as this, it’s quite feature-poor.

Cowon X9 Battery Life
The Cowon X9 does win back some points with its impressive-sounding 110-hour battery, however. It’s non-removable and we don’t know its actual mAh capacity figure, but it will offer greater stamina than something like an iPod Classic.

However, even this strong point is not without its weaknesses. Power management is not great, and after leaving the player sitting dormant for a few days, the battery had run itself down. It doesn’t seem to be as clever as a 2012 media player should be.

Cowon X9 Software and Screen
Unlike the Android-powered A5, the Cowon X9 uses a Cowon-developed interface that lays-out the player’s key features into two pages of panels. Although mostly grey and white rather than a dazzling explosion of colour, it looks stylish enough and is easy to use. 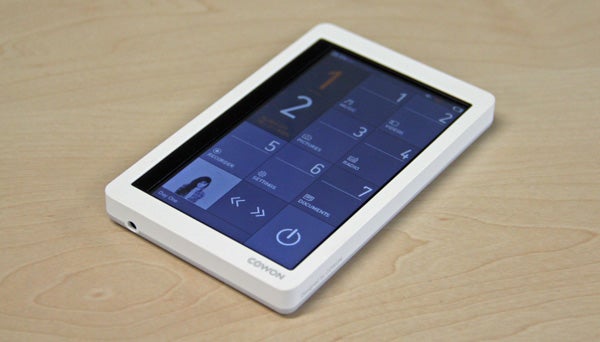 It’s here that you’ll find the few extra non-hardware features on offer in the Cowon X9. There’s an FM radio, a voice recorder (there’s an inbuilt microphone), a document reader, stopwatch, calendar and an extremely basic casual game called Hunter. This is certainly no iPod touch or Android powered Samsung Galaxy S Wi-Fi 4.2 device in terms of apps and games. 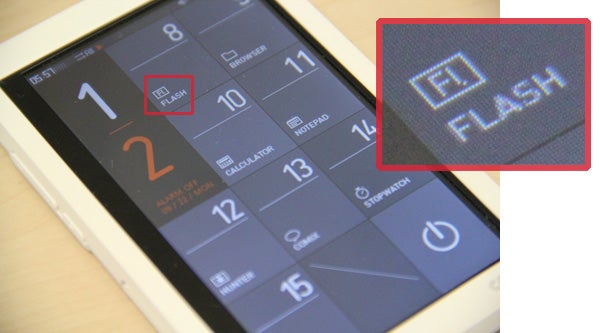 The interface’s chances of making a good impression are diminished by the low-quality screen too. At 4.3-inches across, it’s fairly big, but its resolution is extremely low at 272 x 480 pixels. Held at arm’s length you can still see the pixels. To put it into some form of context, the pixel density of the Cowon X9 is 128dpi. The pixel density of the 2011 iPod touch, 329dpi.

Cowon X9 Video Playback
This screen issue alone is enough to ruin the Cowon X9’s chances of becoming a decent video player, as it simply can’t render the detail of any decent-quality movie or TV show. For those desperate enough to look past this, the player can handle a reasonable array of basic video types including Xvid and WMV, although it did fail to play most of our test files. Battery life when playing video is claimed at up to 13 hours, which is good.

Cowon X9 Sound Quality
The Cowon X9 is bulky, its screen feels like it has just popped through a wormhole from 2008 and it’s quite expensive. But do its musical abilities win us over? 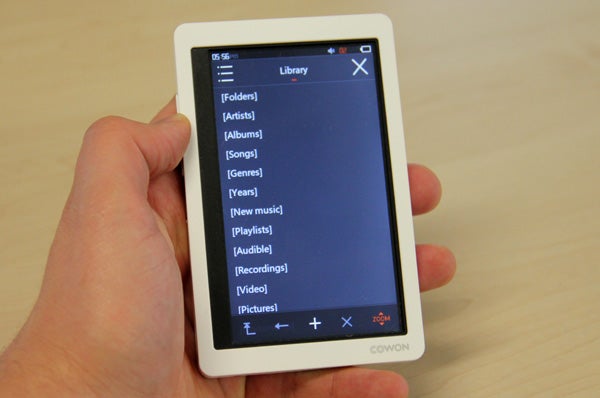 Let’s start with the bad bits. The resistive touchscreen is at its worst when flicking through your music library. It feels inaccurate and clumsy, and as the processor inside the Cowon X9 isn’t exactly blisteringly fast, this is compounded by choppy screen scrolling.

Adding software issues to hardware ones, navigation is often counter-intuitive, frequently making your thumb leap from one end of the screen to the other in order to get where you want to go. It’s a nav style we’ve seen in Cowon devices for years, and the company should have tightened this up a long time ago.

Where the Cowon X9 does excel, though, is sound quality. Like other players from the range, it uses the JetEffect 5 engine, which offers refined sound customisation that puts most of the competition to shame.  Its main event is a 5-band EQ that lets you choose the frequency range of each band, the magnitude of the bump it applies and whether it uses a peaked or wide curve of effect. It’s sophisticated enough to let you make worthwhile adjustments – most media player EQ systems simply aren’t.

JetEffect 5 also offers one of the best bass boost and treble optimising systems you’ll find in a device like this – with BBE , which includes the Mach3Bass low-end booster. Some will prefer using the flat settings, but there are four fully customisable user presets you can tinker with, as well as a few dozen Cowon-made presets. 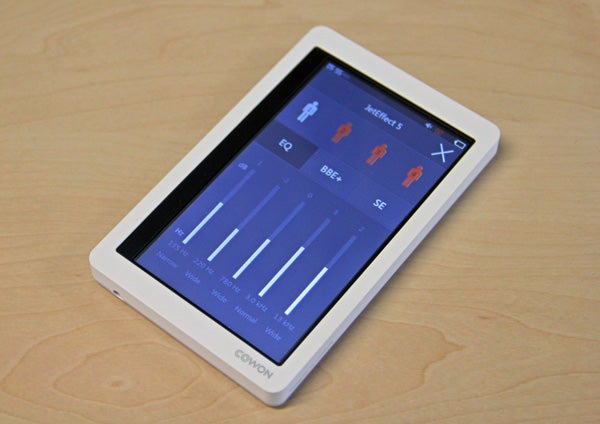 Sound output is notable too. It’s clean, and goes very loud indeed, making it suitable for use with more demanding on-ear and over-ear headphones, which other media players may struggle with.

In-line with its audiophile leanings, Cowon includes support for several lossless formats as well as standards like MP3 and AAC. APE and FLAC are supported, as well as the lossy, but popular with veteran audio fans, OGG format.

Cowon X9 Value
There’s a lot to like about the way Cowon approaches music. But the problem is that not much has changed in three or four years. In several respects, the two year-old Cowon J3 feels more advanced, with a capacitive touchscreen and sleeker design. It has its positive points, but the Cowon X9 doesn’t have the features, the storage or the style to justify its price or pocket-bulge-inducing design. 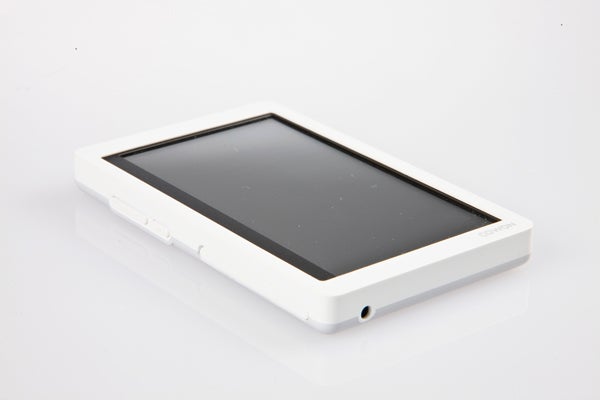 Cowon X9 Verdict
The Cowon X9 is the latest portable MP3 and video player from the Korean audio brand. However, in some respects it feels like a step back when compared with older models. Its touchscreen is resistive, its display low-res and it doesn’t have the storage to justify the bulky design. Cowon needs to get with the times, or it’ll soon be game over.