We described the predecessor to the iAudio 9 – the inspiringly named iAudio 7 – as being like your funny uncle. A bit quirky, entirely likeable, but you wouldn’t really want to be seen in public with him, especially not with your friends. The iAudio 9 is still similar in many respects, but now that uncle has put on a suit, dropped the corny jokes and could probably just about make it through dinner without telling your partner about that incident with the jelly and a trampoline on your 12th birthday you swore should never be mentioned again. In short, it’s a definite improvement. 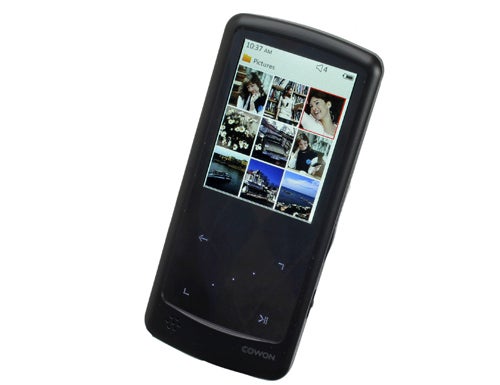 The iAudio 9’s dimensions of 43mm x 95mm x 8.6mm and 40g weight leave it fated to comparison to Apple’s iPod nano. In figures the iAudio 9 is slightly larger and heavier, but in the hand or pocket the difference is literally unnoticeable. However, with an 8GB iAudio 9 costing £99 and a 16GB model priced at £120, the Cowon player is notably cheaper than equivalent capacity iPod nanos – and these numbers do matter.


The overall design is an unsurprising evolution from the iAudio 7. The matt black finish verges on bland, but I quite like its functional look and I imagine the other colours will look similarly tasteful. For certain, this player feels more ‘grown up’ than an iPod nano; neither form nor function have taken priority here and it just works.


The player’s top half of the front is filled by a 2in, 240 x 320 pixel display, while the bottom half is a capacitive sensor san the indentations of the previous model. The controls are context sensitive, but with a little common sense it’s easy to guess what each will do in a given screen. When navigating menus, for example, it’s pretty obvious that a swipe of the navigation bar will scroll up or down while on the now playing screen the same action will pilot through the current track. 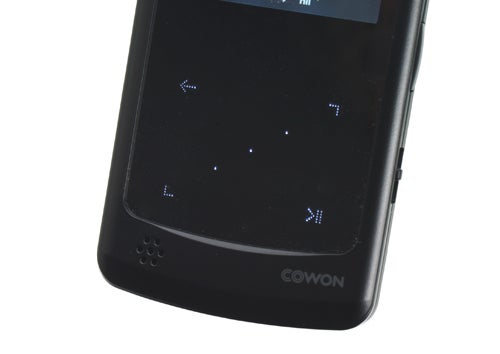 Because of the sheer number of options available on the iAudio 9 some sub menus are buried a little. To help, you can press and hold controls to access shortcuts. In the now playing screen, for example, pressing and holding play/pause gives quick access to the equaliser and playbacks settings (repeat options, shuffle and speed).


This capacitive control surface is backed up by a volume rocker on the left edge, plus a menu button, and combined hold and power two-way switch on the right. Sliding this down and holding it turns the player on or off, a quick flick down turns the display and touch-sensitive controls on or off, and locking the slider up puts the controls on hold.


Usefully the iAudio 9 gives you a couple of options as to how restrictive that hold mode is. Either it can disable all controls, both physical and touch-sensitive, or it can disable everything except the left rocker-button and the menu button – the former then working either as a forwards/back or volume control and the latter becoming a play/pause control instead.

There are a few other interesting options, found in the menus, too. A playback speed control is coupled with pitch correction (both set on or off separately) which aims to leave audio pitched, well, correctly even when fast forwarding. For the most part this works well, although occasionally it doesn’t particularly help. If you fancy it, you could upload your own font to the player, which it will then use in place of the system default – silly, yes, but an indication of just how tweakable this player is.

Format support is, as you would expect from a Cowon player, comprehensive. MP3, WMA, OGG, APE, WAV and FLAC files are all playable, but whether it’s worth wasting capacity on the iAudio 9 by putting lossless music on it is a matter for debate. Oddly, support for AAC files isn’t mentioned, but the iAudio 9 seems happy to play them nonetheless – quite what’s going on there I have no idea, but I’m not complaining. Video files in either AVI, WMV or ASF format and encoded in XviD or WMV 7, 8, and 9 can be played and a TV-out cable is available separately if you fancy watching on a screen that isn’t too small to be used more than occasionally. As well as these traditional staples of any media player’s diet, the iAudio 9 will also happily display text (.txt) files, JPEG images and has a built in Flash player.


Cowon quotes 29 hours of battery life playing audio and seven with video, although obviously the content will have an affect on that – decoding FLAC takes more work than MP3 don’t you know? With mixed use, you can expect a couple of days’ power before needing a recharge. 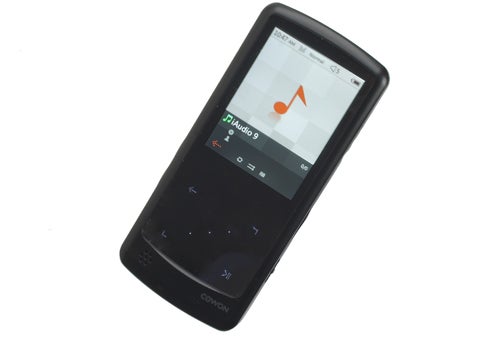 The iAudio 9 also has a built in FM tuner, and let’s you record radio broadcasts at up to 256kbps MP3. That same maximum quality recording is present using the voice recorder, which works using a built-in microphone. There’s a built-in speaker, too, but it should only ever be used in conjunction with the player’s alarm clock – trust me on this.


As you might expect from a company which has earned a reputation for producing some of the most audiophile-friendly media players going, the iAudio 9 has a crazy number of audio tweaking options. As well as a five-band equalizer, there are a number of ‘BBE’ modes, which purport to offer better reproduction for specific types of audio, a Stereo Enhance mode and an MP3 Enhance mode, which claims to restore detail lost during compression.


Many presets are available which means there should be one to suit any user’s tastes. However, if you’re dissatisfied then you can save up to four user-defined options of your own. Just avoid the Reverb options; while adding a sense of ‘space’ to the player’s output may sound nice in theory, it doesn’t really work – especially with studio-recorded music.

One big plus for the iAudio 9 is its support for gapless playback, the lack of which on other players is a complete deal breaker for me – and I’m sure many of you will agree. Words cannot describe how annoying it is trying to listen to an album such as Muse’s ”The Resistance” with pauses between tracks where no pauses should be.

Also useful is the ability to resume tracks where you left off, a must have for audiobooks. I don’t know about you, but I find scrolling for minutes just to get to the chapter I was previously listening to incredibly frustrating.


On the subject of audio books, the iAudio 9 comes with a voucher for one free download from Audible.com, neatly outing the player’s support of that service and encouraging its use at the same time. Other online audio book stores are, of course, available.


If you’re just looking for a simple, OK-sounding media player then the iAudio 9 may prove overly complicated – the huge array of options can be a little daunting. However, on the plus side, it can produce a level of audio quality that you probably wouldn’t expect from such a small player – once you’ve ignored the flat and anaemic default settings and tweaked it yourself. 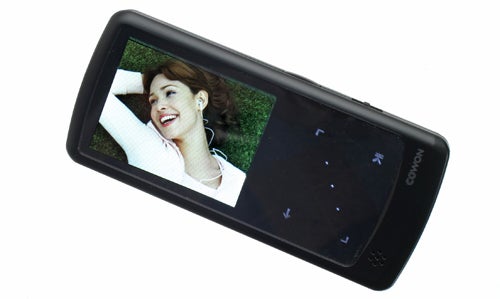 Once set up to your preferences, the iAudio 9 has a wonderfully full output, with plenty of punch low down, great mid range presence and excellent high end clarity. Even with the volume way up there’s no hint of distortion, but just be careful you don’t damage your ears because this player will go ”very” loud.


The Cowon iAudio 9 is not a media player for everyone. While its user interface is intuitive for the most part, the sheer number of options means you’ll be navigating a lot and at some point you may will end up lost in a sea of sub menus. Comprehensive audio format support makes up for this to a degree, but the lacklustre output when left un-tweaked might irk the casual listener. Once configured though, it’s a lovely sounding, capable player.