Bringing true innovation to a sector as intensely competitive as MP3 players is a difficult thing to do. Mostly, companies satisfy themselves with trying to outdo each other on the style front. Others focus on sound quality above all else, and there are one or two who just chuck as many features at their players as possible and then sell them at seemingly suicidal prices. 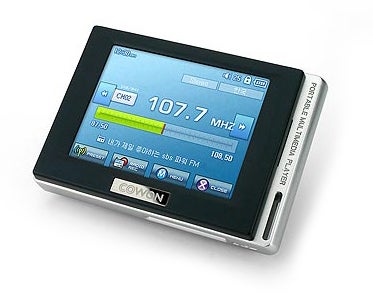 But every now and then a player comes along that truly breaks new ground. Enter the Cowon D2 DMB. Not the most imaginatively named product, admittedly, but it’s the first MP3 player we’ve seen to have built-in digital radio (DAB), and it’s also the first flash memory MP3 player that I’ve played with to have a touch-screen. It is also DMB capable, which means in theory that it can receive broadcast TV programming. In practice it’s a damp squib as there are no DMB broadcasts in the UK right now. 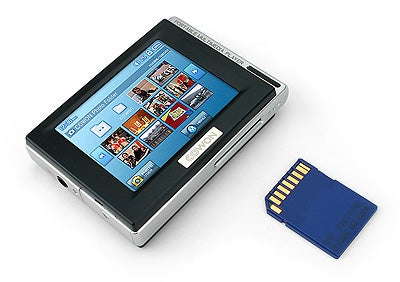 I was quite excited about the prospect of being able to listen to proper sports coverage – Radio 5 Live – on the same device as my music. Radio 5 is on medium wave, which means I can’t normally listen to it on any of the FM radio-equipped players I have hanging around and have to take a separate portable radio around with me if I want to keep in touch with the results. With this, I could listen to 5 Live and switch over to my own music once Sports Report had finished, so as soon as it arrived I eagerly whipped the D2 out of the box to have a play. 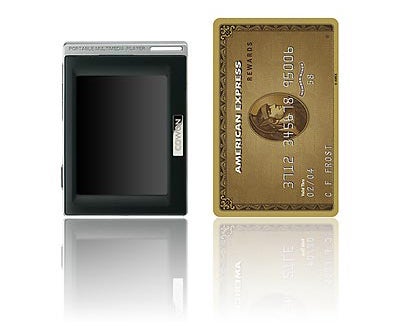 First impressions were certainly favourable. The D2 isn’t attractive in a designery, Laurence Llewelyn-Bowen sort of way, but it is well-built and fits nicely into the palm of your hand. If you want a comparison, it’s about the size of a couple of matchboxes lined up, side by side.


A 2.5in screen fills most of the frontage and there are a few basic controls – hold, volume and menu – on the top edge. Other than this, it’s a pretty minimalist affair. On the left you’ll find the audio out socket and a small flap covering the USB and AV connections, while down below there’s an SD slot for expanding the player’s memory capacity. A welcome feature, given how cheap flash memory is these days.

Fire it up and you’re greeted with an impressive sight. The 320 x 240 screen is extremely bright, crisp and clear, it’s viewable even outdoors in bright sunlight, and watching videos on it is a far more pleasurable experience than I anticipated. Part of the reason it’s so good is that it supports frame rates of up to 30fps where many smaller players limit you to 15fps. Either way, I could quite easily imagine myself watching long TV programs, even movies on this device while on a train or plane. It’s that good.


As I mentioned above, the screen also doubles as the D2’s main control interface and this works extremely well. I have criticised Cowon’s players in the past for having indecipherable and overly complex menu systems, but this is a vast improvement. Touching the screen brings up a selection of context sensitive popup menus at the bottom of the screen along with a close button and one for accessing the main menu. Above these the larger play/pause skip track buttons appear, overlaid on the track information in the centre of the screen. 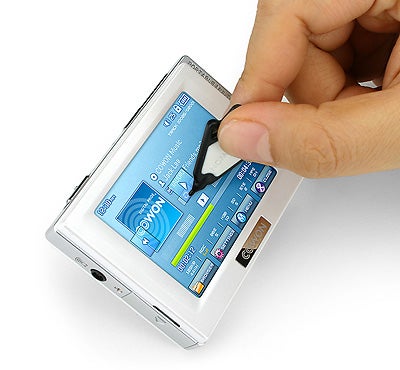 It’s still not the simplest player to operate in the world, and can’t compete with the likes of Apple’s iPod or the Trekstor Vibez I reviewed a couple of months ago, but finding your way around isn’t that hard. And, after a day or so with it, I could honestly say that there isn’t anything about it that I find annoying. A particularly nice feature is the way you can create dynamic play lists as you go along, and even add bookmarks in the middle of files – particularly useful if you’re going to use it as a dictaphone.

Alas the player’s coolest feature – DAB Radio – turns out to be a big disappointment. When you can get a strong signal the sound quality is excellent, as it is with music files. But getting a signal strong enough to listen to any station proved almost impossible. In my house, the only place I could listen in comfort was standing up in the kitchen, next to the sink.


I tested it in various other locations – in my garden, a couple of miles down the road, in Sainsbury’s supermarket car park in South Woodford, then drove halfway across London but I still couldn’t receive a station without performing contortions of the arms, holding the player at impossible angles or perching it on surfaces where it was in danger of being dislodged and dropped. Worse still, if you pick a station with intermittent reception the player often crashes in sympathy, blacking out the screen and making it difficult to exit the radio mode without a reset.

All is not lost, however, for you can buy the D2 without DAB and it’s otherwise an extremely capable machine. You get an FM radio included with the player too, so you’re not completely bereft of news, sport and music broadcasts. The D2 allows you to record directly from radio (DAB and FM) and you can even set the player to record at a certain time and date, just like a VCR or act as a radio alarm clock.


Being a Cowon player, the D2 is packed with a myriad of other features. File support, for instance, is superb. Not only can you play the usual MP3 and WMA files, but also OGG, FLAC and (in a future firmware upgrade) APE. You can switch between MSC and MTP modes for USB file transfer, which means you can use the D2 to play DRM tracks if you want, or simply drag and drop music straight onto it, as if it were an external hard disk. On the recording front, you can set up different levels for microphone and line-in recordings, and different bitrates for recording voice and radio broadcasts. 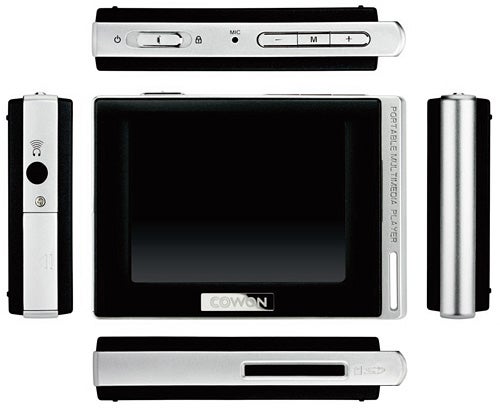 Battery life is unbelievably good at around 50 hours for music and, more impressively, 10 hours for video – enough to watch Lawrence of Arabia (the director’s cut) twice with room to spare for a couple of episodes of The Simpsons. Other nice touches include a mini stylus, which ingeniously doubles as a kickstand when plugged into a slot at the bottom right, and a TV out, though irritatingly the cables for this are ‘optional’ extras. 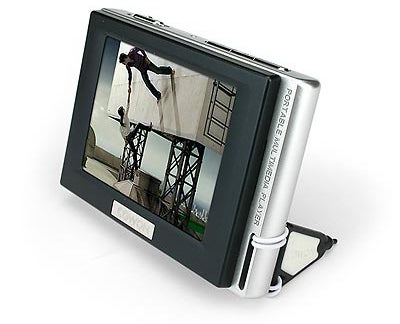 Most importantly, however, sound quality is extremely good. The standout feature is its output power, which is an impressive 37mW per channel into 16 ohms. Many flash-based players don’t get anywhere near this level of output and it means that the D2 can drive larger headphones just as comfortably as it can smaller earbuds and noise isolation ear canal phones.


On top of extra volume, that extra power also means increased dynamics – orchestral strikes take on a new life while quiet passages of music don’t suffer from loss of clarity and detail. The opening to Mahler’s 5th Symphony is a good test of this, and most players flounder when confronted with the simple solo clarion call of the trumpet followed by an enormously powerful blast of complex orchestral ear-bleedery. The D2 pulled it off with surprising dexterity, making it possible to hear each section of the orchestra clearly.

In other areas, the D2 isn’t so accomplished, but it is still superb. Of course the big bonus is that you can play lossless file formats back – including the excellent FLAC, so it’s always going to beat a player that can’t do this. But when lined up against the outstanding Trekstor Vibez, my current benchmark for sound quality, it can’t quite match its refinement.


Playing a few tracks from Stacey Kent’s The Lyric exposes a sound that’s ever-so-slightly over-warm. Where the Trekstor Vibez releases the soft snare drums and piano with a lightness that’s a pleasure to behold, the D2 casts a slightly warm glow over it all. The same goes for the quiet tracks on Lisa Ekdahl’s Back to Earth album. Detail is superb, but not quite on the same level as the Vibez. 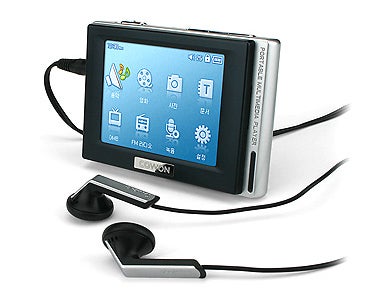 Feed something a bit more lively through the D2 and that extra power comes into its own, though. Green Day’s Letterbomb steams along with great energy, with the guitars really driving on and the drums really thumping out. Playing Jamiroquai’s Black Capricorn day reveals a slightly lean bottom end, but it’s powerful and clean enough not to dampen the enjoyment and a quick fiddle with the many equalizer settings and bass boost options will remedy this for bass fiends.


Even the supplied earbuds are halfway decent with a surprisingly clear and punchy sound. Though if you’re spending this much (£169.99) on your music player, you surely have a spare twenty quid or so to get yourself a better pair.


Whatever way you look at it, the D2 DMB is an extremely capable MP3 player. The touch-screen is good, the video playback stunning and the battery life brilliant. It has expandable memory, and the sheer range of settings and capabilities is second to none. Even without the DAB capability this is the best all round mini PMP I’ve come across.


The big question is would you pay £170 for it? Well, if the DAB functionality actually worked reliably, maybe it would be worth the stretch if you were desperate for digital radio on the move. Alas it doesn’t and that makes the price untenable, even more so when you consider it’s dearer than the iRiver Clix 2, and the imminent 80GB iPod Classic (£159) and 8GB video-enabled iPod nano (£129).