Gadgets like the Cowon A5 are an endangered species. Calling itself a PMP, or portable media player, it’s the sort of device that was popular a half-decade ago – since whittled away into obscurity by big-screen phones. Can this 4.8in screen portable bring the portable video and audio player back to the spotlight?

Design
One of the Cowon A5’s top claims for up-to-date-ness is that it runs Android, Google’s smartphone and tablet operating system. It opens up the handheld to all sorts of fun functionality, but also serves to emphasise quite how tubby a device this is. 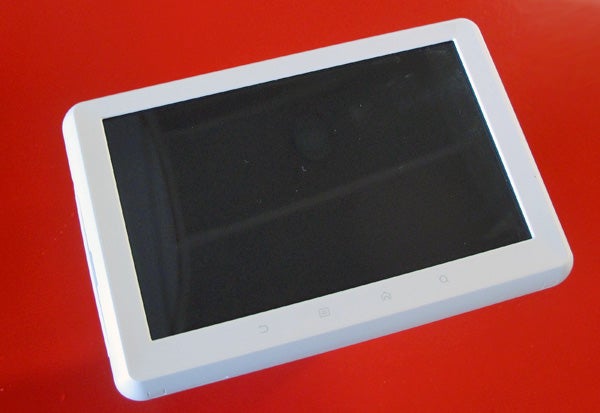 The Cowon A5 has a large 4.8in screen, but now that slim top-end smartphones have similar-sized screens, we can’t just forget the girth in view of screen size. At 15mm thick, and with a generous screen bezel and curvaceous body, we found the PMP a little too large to fit comfortably into pockets. Giant phones like the Samsung Galaxy S3 get by on portability by being so slim, but with sat-nav-like dimensions, the A5 doesn’t.

Another possible excuse for a big ‘ole booty is the use of a hard drive. We forgave last year’s Cowon X7‘s tubby frame because it offered 120GB or 160GB of internal storage – way more than any popular solid state MP3 player. However, once again the Cowon A5 fails to make up a good excuse. It uses 32GB or 64GB of internal storage, as offered by the ultra-slim iPod touch. 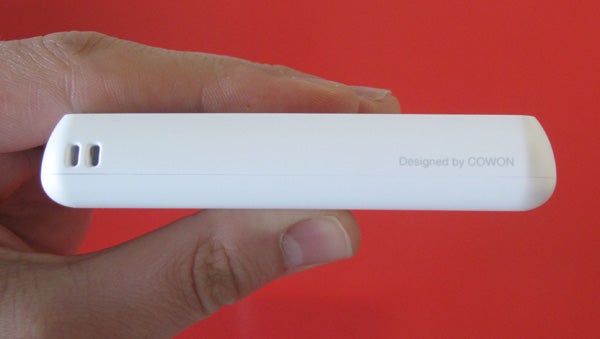 A voluptuous body makes the Cowon A5 pretty comfortable to hold, but we have no idea why the device is quite as big as it is. It makes the A5 feel dated, and dramatically reduces the convenience factor. If it’s pocket-bound, it’s going to take up a whole pocket. 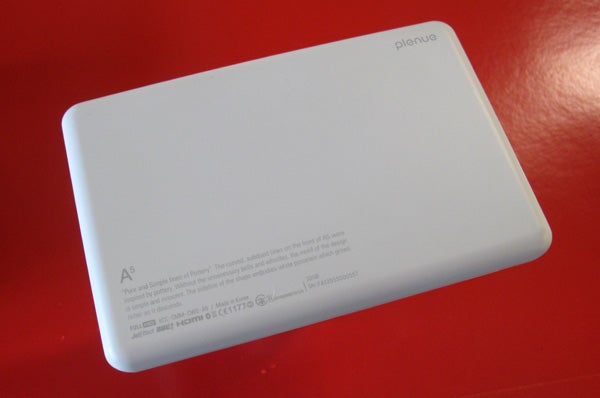 Build quality is good – the A5 is made of white plastic – but doesn’t have the high-end luxury feel of metal bodied-slim players. Cowon writes on the player’s back that it is “inspired by pottery. Without the unnecessary bells and whistles, the motif of the design is simple and innocent.” Fair enough, Cowon, but we found it more “quaint and confusing” given quite how far off current design trends it is.

Connectivity
And for a device that claims to leave out “bells and whistles”, the Cowon A5 provides very good on-body connectivity. On its left edge, when held in landscape, there’s a white plastic flap that hides the microUSB charge/data socket, a microSD slot and HDMI video output. 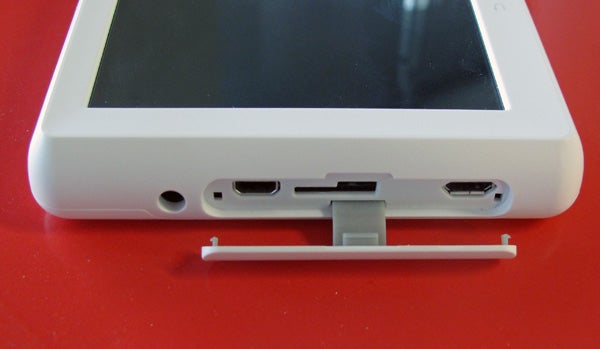 Alongside it is the 3.5mm headphone jack. Not only does this comprise everything you need, its connectivity is well-done too. The slap cover ensures the sockets don’t ruin the A5’s ergonomics and the headphone jack is placed sensibly enough not to become a nuisance whether the PMP is held upright or on its side.

The Cowon A5’s design begs to be held in landscape orientation, though, with four touch sensitive Google navigation buttons subtly laid-out in bottom part of the screen bezel. Design-wise they blend-in well, but we found that they’re a bit buggy. They occasionally fire off (there’s a vibrate function used as standard when they’re pressed) on their own, or flat-out refuse to respond until the A5 is reset.

This became the most frustrating factor of our time with the Cowon. It may be fixed in a firmware update, but it’s frequently infuriating as-is – especially as the worst offender, the back button, is the most commonly used of the lot. 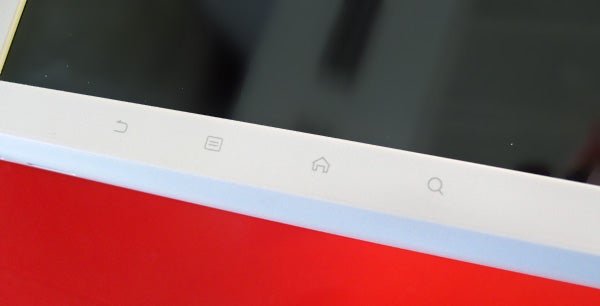 Other on-body features include the internal speaker on its bottom and the volume rocker and power button up top. For a device this size, we were disappointed to hear that the speaker isn’t as good as that of an iPhone, lacking warmth and body. Sound is output in mono too.

Video
The Cowon A5’s main hardware feature is its 4.8in screen. Although it’s the sort of size that we might describe as teetering between phone and tablet forms in a phone, it’s a classic inch rating for a traditional PMP.

A number of elements make the display seem dated. First, its screen resolution is 800 x 480. Although the A5’s interface doesn’t look obviously blocky, this is well below the standards set by top smartphones and the iPod touch – which has more pixels crammed into a much smaller display. This becomes particularly noticeable when surfing the web or playing games, although is fine for most video-watching and interface-surfing. 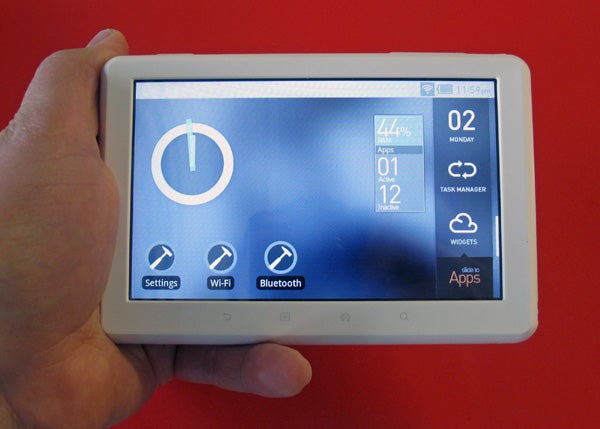 Next up, the Cowon A5 appears to use a TN-based TFT display panel. Admittedly, it’s a good one that looks great when viewed straight-on, but tilt the handheld back and forward and you’ll see the usual contrast shift effect – robbing the picture of all shadow detail. This doesn’t come into effect when held at a movie-viewing angle, and so isn’t a definite deal-breaker, but again makes the Cowon feel a bit dated.

The third in the unholy trinity of screen sins, and the one we found the hardest to live with, is the use of a resistive touchscreen. Almost all smartphones and tablets use capacitive screens these days, and while this is a good example of the resistive type, it feels less responsive – more sluggish – than the capacitive type.

Video Playback
Right at the top of the list of reasons to buy the Cowon A5 is because you want something to watch videos on. It features its own media player software, and comes with more advanced video codec support than most Android devices.

The majority of our test files played flawlessly, and the video player app is decent, with easy navigation of the internal memory and control over playback speed as well as video repeat, fast forward and resume functions. It is not perfect, though. Although HD content did play back successfully, our high bit-rate 1080p MKV files consistently caused a software crash. This is disappointing in a video-driven device. The battery lasts for up to eight hours for video, which is a decent figure given Android is notoriously battery-sapping.

Music
The music side feels less compromised, although 32GB and 64GB capacities fall disappointingly short of the sort of music libraries the 160GB Cowon X7 and iPod Classic can handle. The music app is bespoke and makes particularly good use of album art, blowing covers up to inhabit the background as well as foreground. 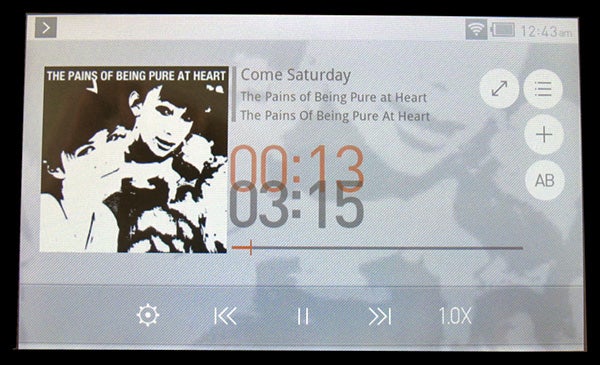 There’s none of the confusing navigation we struggled with in last year’s Cowon players, and library navigation is thumb-friendly, making sifting through your collection one-handed fairly easy. However, the resistive touchscreen puts a damper on the experience. Scrolling feels clumsier than on an iPod touch, or capacitive Sony player.

The biggest music win for the Cowon A5 is its use of the JetEffect 3.0 audio customisation software. This is pretty much class-leading in its ability to let you subtly tweak the EQ, and apply unusually good treble and bass-enhancing effects. JetEffect 3.0 also offers reverb and stereo enhancing filters – they don’t improve music in our book, but they must have some fans out there.

Codec support is great, with geek faves FLAC, APE and OGG boosting the A5’s audio cred above that of rival Apple devices. File transfers are fairly quick too, coating up to around 7-10MB a second. However, the USB connection with your computer times out annoyingly quickly. You can view the internal memory as a simple disk drive when connected over USB, but leave the A5 doing nothing for a minute or two and the link will sever.

We’ve covered the main parts most Cowon devices are all about, music and video. But the Cowon A5 is a bit more versatile than most of the company’s gadgets, because it runs Android.

Cowon has produced its own user interface to slap on top, and it looks good. Its icons have a tasteful, relaxed visual style that brings a more grown-up look to the device than many Android devices. The basic layout of Android remains, though. You have vertically-scrolling home screens to customise with links and widgets, as well as a main apps menu accessed with a swipe on the bar to the right of the home screen – very thumb-friendly. 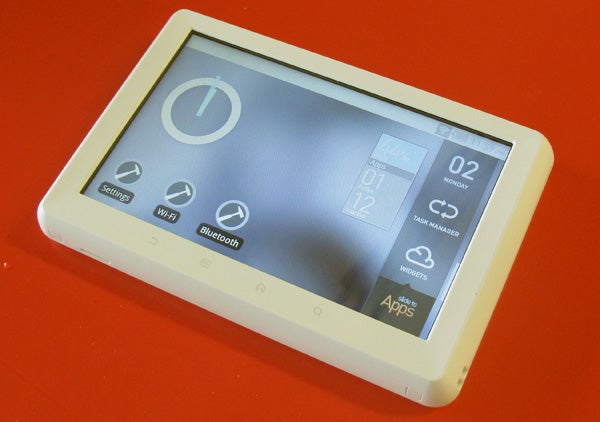 These two core parts of the interface can only be viewed in landscape mode, presumably because the touch sensitive bezel buttons need to be in the right place at all times. Apps, including the music app, tend to support screen rotation.

Android – the Missing Bits
The Cowon A5 is not a fully Google certified device, and therefore does not have the Google Play store or Google’s roster of apps. In fact, it has no built-in app store at all – most non-certified Android devices at least shove a third-party solution in. Cowon may add one in a software update.

Installing your own is fairly simple. Android app installer files (.apk) can be downloaded and dragged on to the internal memory, or snagged directly from within the A5’s internet browser. 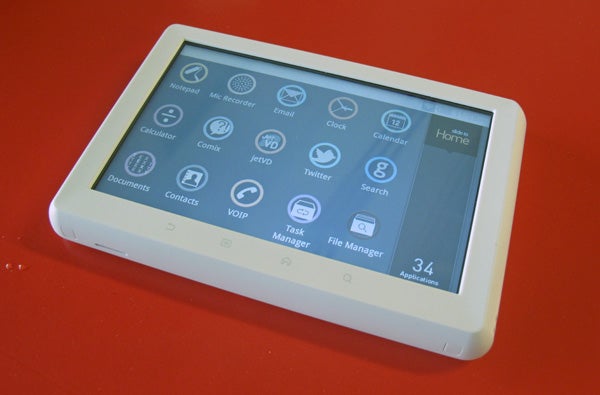 With a 1GHz processor and 512MB of RAM, the A5 isn’t capable of playing the most impressive Android games well, but it can easily handle casual favourites like Angry Birds and Temple Run. However, focusing on music and video rather than apps and games, app potential here is just ok rather than impressive.

To help make us for it slightly, the Cowon A5 has a few extra apps of its own. There’s a stylish-looking FM radio and a custom Twitter app. For the latter, you’re better off seeking out one of the better-known Android alternatives.

Web browsing
There’s a web browser too, to let you surf using the integrated Wi-Fi connectivity. The 4.8in screen is large enough to make reading sites comfortable, but the resistive touchscreen becomes a serious annoyance here. If you’re used to the pinch-zoom gesture from browsing on a smartphone, bear in mind you can’t do it here thanks to the resistive touchscreen.

Performance
The main interface of the PMP looks pretty good, but a trio of factors conspire to reduce performance below that of the best Android devices. The 1GHz processor is fairly low-powered, the Android Gingerbread software lacks the performance tweaks of newer versions and the resistive touchscreen simply isn’t as snappy as a good capacitive screen. With these working in tandem, the Cowon A5 doesn’t feel as slick as it should do – as a £250 Android device released in 2012.

Value
An unusual device of ups and downs, the Cowon A5 isn’t the easiest Android portable to assess. It’s chunky but doesn’t have the hard drive storage you’d expect from such a big box, it has Android but its touchscreen and ageing software let it down. Its music and video capabilities are far better than most other Android devices, but gaps remain in its video armoury.

For a device so expensive, there are just a few too many out-of-date parts here to earn a recommendation. You may not get the impressive JetEffect engine with other Android media players, but we’d much rather live with the cheaper, slimmer, prettier Samsung Galaxy S WiFi 4.2.

The Cowon A5 is an unusual device that feels like it has come from a different gadget era. It’s quirky and has unusually good audio capabilities. However, it is too behind the time in too many respects to earn a recommendation. The display isn’t great, the touchscreen is resistive and for a body so big storage is surprisingly limited.