The Cougar 700K runs off just the one USB connection, with the USB, headphone and microphone pass-throughs all being optional. It can also function without installing its driver but due to some of its quirkier features it won’t provide a particularly satisfactory experience until you install the Cougar UIX software and get it setup how you like. 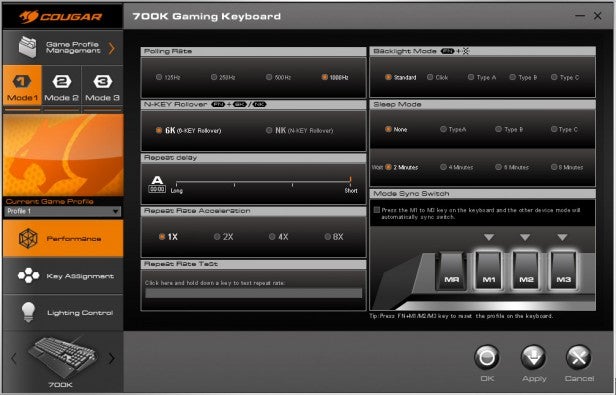 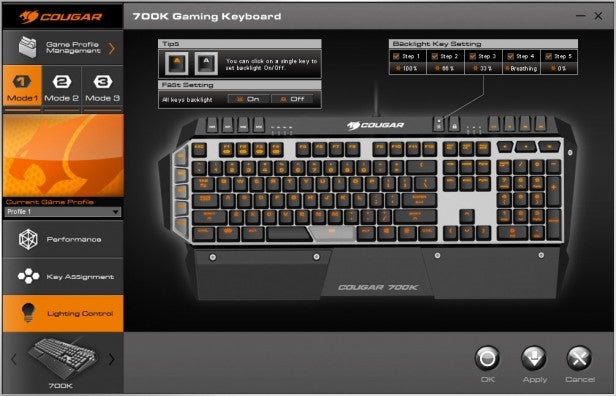 The software is comprehensive and a little daunting at first, especially as we found the keyboard wasn’t really setup to our liking straight out the box so we had to delve right in and get tinkering. It also has an annoying habit of needing to close every time you change a setting. Overall, though, it gets the job done.

There are two things we found we needed to do initially. The first was switch the left Windows key back to being a Windows key and not the Fn button and the second was to make the G6 button – the other half of the spacebar – a spacebar again. Both features may be useful when gaming but for normal desktop work it’s a silly arrangement.

As well as having some keys not assigned the function you’d expect, the 700K gets off to a bad start thanks to its use of a US layout, i.e. no pound sign, small Enter key, large right shift key. And this isn’t a case of the review samples being US but the retail ones being localised – there is only one layout. For us that’s an instant fail.

If you are happy to compromise and use a US layout, though, then the Cougar 700K performs very well. Its Cherry MX Red switches are as delightfully light and responsive as you’d expect making typing quick and easy, as well as them being hard-wearing and responsive during gaming. 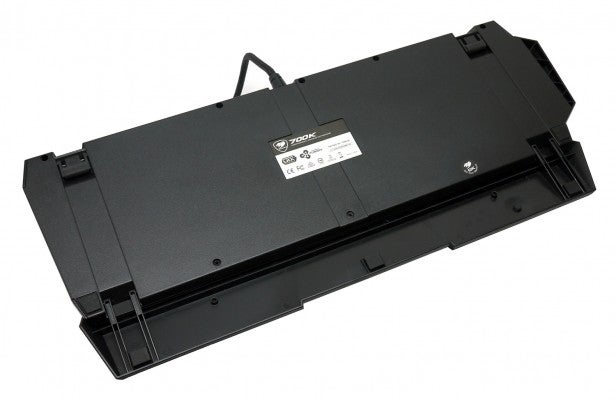 The finish and font of the keys is also very nice, making for a grippy yet slightly soft feel with easy to read lettering.

We’re also fans of the raised profile of the G-keys as this prevents you accidently resting hour fingers on the wrong keys – a problem with the Logitech G710+. We’ve never actually found keys positioned down the left edge like that to be particularly convenient as they’re just too much of a stretch but it’s become something of a standard.

As for the G6 key, it actually makes a lot of sense once you get used to the slightly odd feel of having a split spacebar. It’s far easier to stretch your thumb out to reach it than any of the other G-keys and you don’t have to take any other fingers off the WASD keys to do it either.

In fact, overall we’d say this is one of the few mechanical keyboards that feels very definitely like it’s optimised for gamers, somewhat at the expense of day to day typing it has to be said. Whereas so many so-called gaming keyboards that use mechanical switches are really just premium standard keyboards with a few programmable keys bolted on, Cougar has clearly decided to go all out and we actually think it works.

You’re always unlikely to find a keyboard makes the difference to your score when gaming – unlike a good gaming mouse – but there are definitely features on the 700K that we’d find useful as a gamer. 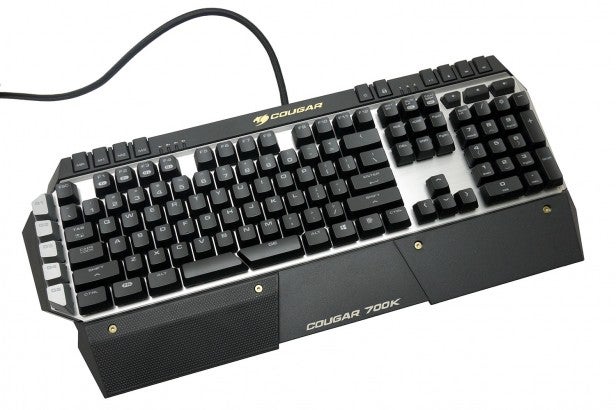 At first we weren’t entirely on board with the Cougar 700K, finding its compromises in the pursuit of supposed gaming perfection to be too much of an inconvenience in day to day use and initial setup. Not to mention it’s only available in a US layout. However, once setup how you like it makes for an excellent gaming and typing tool.

The styling may not be for everyone but the build quality is very good and the key action is excellent plus all the extra keys are well positioned and easy to use.

As for the split spacebar, while it feels odd at first, you do get used to it when typing and while gaming its far more convenient than any other key because you don’t have to remove your other fingers from the WASD keys.

All this and the 700K is competitively priced. It’s just such a shame the layout is not ideal for UK users.

Fancy something a little smaller? Check out the Ozone Strike Battle

If you can live with the fact it’s only available in a US layout the Cougar 700K is a surprisingly high quality mechanical gaming keyboard. It’s also packed with features and we’re particularly impressed with the split spacebar design.