Following on the trend of adding LED lights to memory modules, which it pioneered with the XMS Pro series of DDR modules, Corsair has taken now the concept a stage further, with these delightfully over-the-top XMS Xpert modules.


In terms of base specifications the XMS Xpert modules are no different from the XMS Pro modules that won an Editor choice award in our group test last year. Corsair sent us two 512MB sticks in for review, rated at PC3200 (400MHz). The latency timings are 2-2-2-5 which is as good as it gets. As we’ll see though, these modules are not for the hardcore overclocker, but rather for those looking for a cool new feature to add to their PC.


The physical dimensions of the XMS Xpert modules are also similar to the XMS Pro modules. However, the top part has been changed and instead of a row of LED lights you’ll find a row of pins. The pins interface with the display module, and it is this that sets the XMS Xpert memory apart from every other memory stick currently on the market. 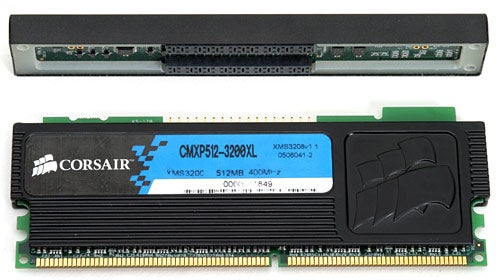 The display modules have connector pins on both sides enabling you to install the memory modules on either side providing as much flexibility as possible when you set up your PC. The increased height of the modules also means that you can use standard DIMMs in combination with the XMS Xpert modules, enabling you to add more memory. The top of the display module features a blue Corsair logo on each side, two memory activity LED bars, similar to those on the XMS Pro modules and 10 red LED alpha-numeric displays. 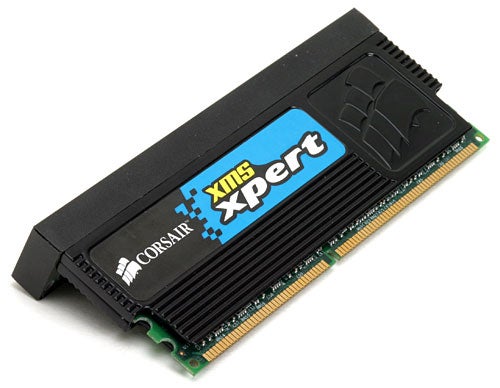 It is the LED displays that make the XMS Xpert modules so special. Not only do they display the data that Corsair has pre-programmed them to show, but you can actually edit the data displayed by using the provided software. The Corsair Memory Dashboard controls the displays, and also provides a wide range of other information about your memory such as clock speed and memory timings. This works with all types of memory, although you get less information than you do with the XMS Xpert modules. 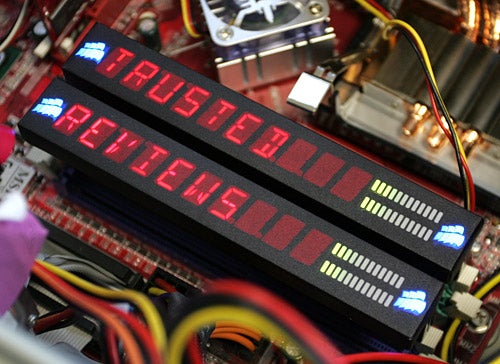 Each memory display can be edited independently from the other, so you can display different items on the two displays or just display things in a different order. The default data consists of speed, temperature and voltage readouts as well as a scrolling message from Corsair. Information such as voltage, temperature and speed can be set to use one or two decimal places. The temperature can be set to Celsius or Fahrenheit, but for some reason Corsair hasn’t added support for the Kelvin scale.


The display can show up to 23 letters or digits, although this is done by making the text scroll across all 10 of the LED displays. Once more than 10 letters are entered the input box option automatically switches to scroll mode, so you don’t even have to worry about enabling this feature. However, you can’t go beyond the 23 letter limit for a single line of text, but you can use multiple rows of text. There is also an option for reversing the text in case the memory slots are placed horizontally instead of vertically on your motherboard.

Installing the modules is just like installing any other DIMMs. You have to take care not to damage any of the pins on top of the modules and the displays shouldn’t be fitted until after the modules are in place. The displays can only be fitted the correct way, as there are two small holes in one side that have to line up with the raised parts on the memory modules.


The installation procedure is covered in a brief install pamphlet printed in five languages. You also get a full PDF manual on the CD as well as Everest – a system monitoring application.

Being Corsair memory one would expect these modules to perform pretty well. The benchmark numbers didn’t disappoint either with a PCMark 2004 memory score of 5028 in a Pentium 4 3.2GHz system with i865PE chipset. Similarly in the SiSoft Sandra 2005 memory integer test the result was 4450MB/s while the float test result was 4449MB/s. The memory cache test reported 9443MB/s.


Now there is faster memory out there, but considering that the XMS Xpert modules are only rated at PC3200 these numbers are very good. As for overclockabilty I releaxed the latencies to 3-3-3-8 and was able to push our test system to 235 Front Side Bus but no further. However, this could be a limitation of the system so I will have to reserve judgement on the absolute overclocking potential of these modules.


But as I hinted at towards the beginning of this review overclocking is not the main selling point of the XMS Xpert modules – it’s the funky displays. If you’re looking for something to differentiate your PC from everyone elses at the next LAN party this could be the thing for you. If CeBIT is anything to go by the XMS Xpert modules should prove very popular as everyone seemed to be using them in their motherboards at the show. 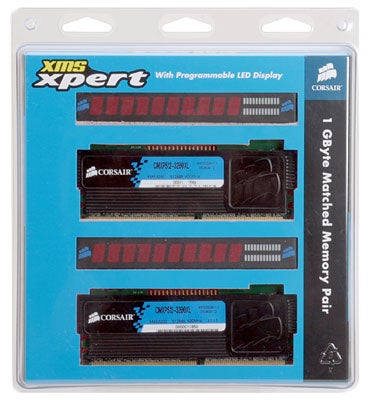 Of course the downside is the price premium you have to pay for the LED displays. The XMS Pro modules would set you back £182.13 from Scan, while the XMS Xpert modules are no less than £216.20. That’s an extra £34.07 for the LED displays over the LED lights on the Pros. But then again, this is not a mass market product as you’d buy completely different modules if you just wanted cheap memory.


Corsair has created something truly unique with the XMS Xpert memory modules, which for once doesn’t have anything to do with memory performance. The XMS Xpert is the first true gadget memory to hit the market and with decent performance to match it’s hard to knock it.