What is the Corsair Void RGB Wireless?

The Void RGB is Corsair’s headset that’s all about gaming. It offers Dolby Headphone surround audio through the Void’s 50mm drivers, plus two RGB lighting zones, and up to 16 hours of battery life in a 12m range.

While the Void RGB doesn’t ooze luxury, and isn’t the absolute best-sounding headset on the market, it’s a thoroughly well-rounded solution that’s available at a very reasonable asking price. If you’re after a smart headset for your gaming audio, the Corsair Void definitely warrants strong consideration. 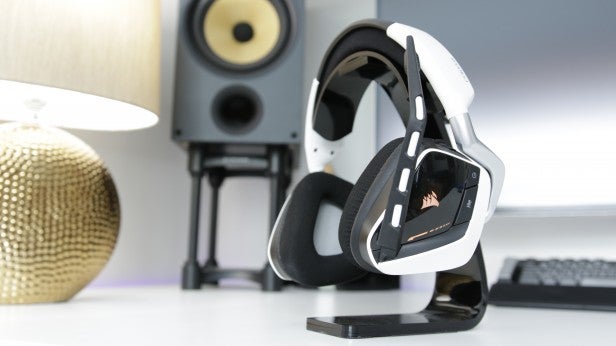 The Void is a rather versatile chap, with plenty of colour and connectivity options available. The version reviewed here is the wireless variant – costing £99, and coming equipped with a 2.4Ghz receiver and micro USB charging port. If you want to shave a few pounds (or prefer a wired affair) you can instead opt for the USB or 3.5mm analogue variants.

Glance at the headset and you’re likely to be won over by its design, as it’s an attractive two-tone combination that looks stylish, despite its position as a gaming peripheral.

The top section of the headset is constructed from a tough plastic. It doesn’t look particularly expensive, but it doesn’t feel like it’ll break in the immediate future. The body can be expanded to fit larger head sizes, though unusually I found that even the lowest setting was a little too large for my head. The underside of the headband is packed with rather large amount of cloth-covered memory foam. It’s very comfortable against your head, and sets the standard for how top padding should be done – soft, light, airy. 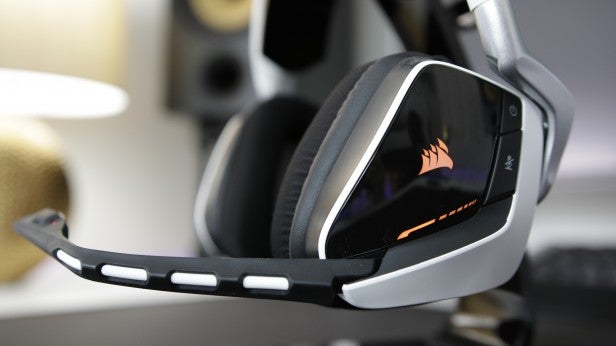 The body of the headset consists of two medium-sized earcups, both of which neatly connect via a solid metal hinge that allows for 90 degrees if rotation. The shape is slightly unusual, with a quadrilateral design that tries to naturally replicate the shape of your ears. Each ear pad is crafted from a soft-touch cloth, and can be removed and replaced in the event of excess wear. In practice, the Void is rather odd headset, as it’s amazingly comfortable over very long sessions, but has any real lack of grip against the head. As such it likes to move around of its own accord, and requires frequent adjustment to remain in place.

The sides of the headset feature a bright RGB Corsair logo (that can be disabled), with a micro USB connector and volume controls located on the left-hand side. The RGB lighting is bright and vivid, but practically speaking is about as useful as a chocolate kettle, as you can’t see it while you wear it, and it’ll make a significant dent in your battery life. It has been well implemented though, so I can’t overally complain.

The microphone can be folded down into place on the left side of the Void, though it’s sadly stiff and non-detachable. Corsair has also implemented an LED indicator on the tip that can be programmed to relay messages in the Corsair CUE software. 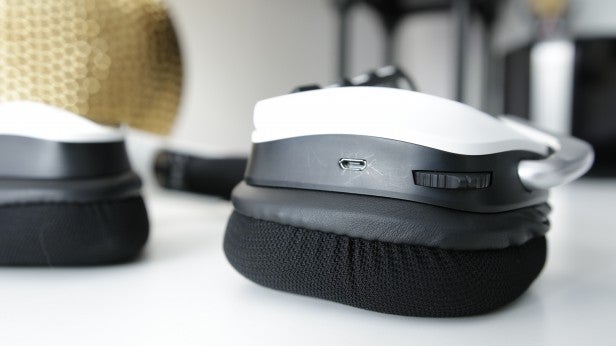 Connecting the headset requires the included USB dongle, which provides a decent range without static interference. Corsair states that you can expect 12m of range, and in perfect conditions that’s likely to be perfectly possible. In the real world the Void failed to drop out while in the same room as the PC, though walking into the room next door saw the signal quickly fade away. The battery lasted me around a week per charge, with an average of two hours of use per day. Using the RGB lighting will reduce this number, though, so use sparingly.

The audio quality is very strong on the Void RGB, with a performance that works wonders for music and games alike. The balance of the sound signature is excellent, with a slight favour towards the low end aiding the punchiness of first-person shooters. Playing tens of hours of Call Of Duty was rewarding, with a faithful recreation of gunfire and explosions aiding the immersion factor. Less demanding titles such as Sid Meier’s Civilization require a more subtle approach, and it’s easy to lose hours at a time listening to the game’s gentle soundtrack on the Void.

Music is also a strength, as the range of genres handled with ease is quite impressive. There’s plenty of vigour through the low end, and well-controlled highs that never seem to get lost or break apart. It’s not the best-sounding headset I’ve ever heard, with detail sometimes getting lost in the mid tones, but for a £99 wireless model it’s darn impressive. 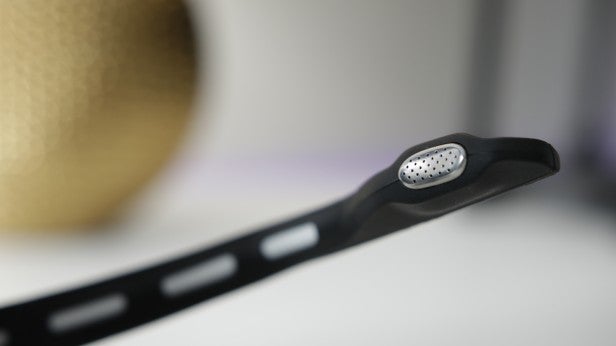 Unfortunately, the microphone does the let the party down a bit, as it lacks any form of pop filter, and can be a little unpleasant to listen to. While clear, the sound is also very quiet out of the box, and is tainted with elements of static pickup. It’ll be perfectly usable, but it won’t be right for everybody.

Controlling the headset is possible through the Corsair CUE software. It’s matured well with time, and is one of the most complete and robust pieces of companion software on the market. Setting up the Void is easy, with options to adjust the equaliser, RGB settings and profiles. You can also synchronise the RGB lighting with other Corsair peripherals for some rather cool effects. 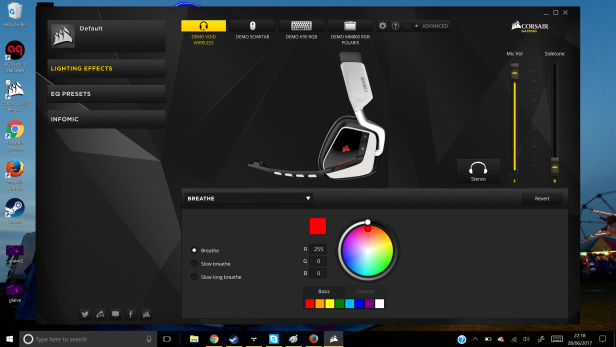 Should I buy the Corsair Void RGB Wireless?

The Void RGB is an easy product to recommend. It’s well priced, mostly comfortable to wear and has a strong level of audio quality that’s a cut above a lot of its competition. I’m also a fan of the simple design, which has an element of gaming flare about it, but not in an overly controversial manner.

My main issues with the headset are with the microphone, and the lack of any real grip against the head. The mic is less of an issue for those who rarely use it, though being able to remove it would be a nice touch. The light grip, however, is more significant, as while it’s unlikely to run away from you, it just feels too loose, and it’s quite distracting to have to readjust every five minutes or so.

Still, the overall package is strong, and those who can ignore those two issues will no doubt be very happy indeed. 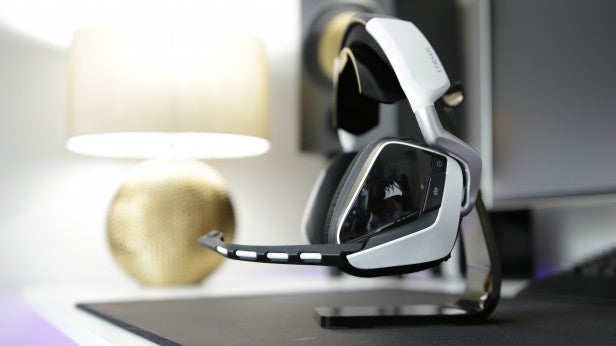 It’s not perfect, but the Void RGB offers great performance at a very reasonable price.