What is the Corsair K95 RGB Platinum?

The K95 Platinum is the supercar of gaming keyboards, coming loaded with everything a hardcore gamer needs. Highlights include super-responsive Cherry MX Speed mechanical key switches, a full array of customisable RGB lights, macro keys and on-board memory that lets you save your profiles directly to the keyboard.

If you’re a hardcore gamer with money to burn, this is the keyboard for you. However, with pricing starting at a hefty £200, it is one of the most expensive keyboards currently available and will be overkill for more casual players. 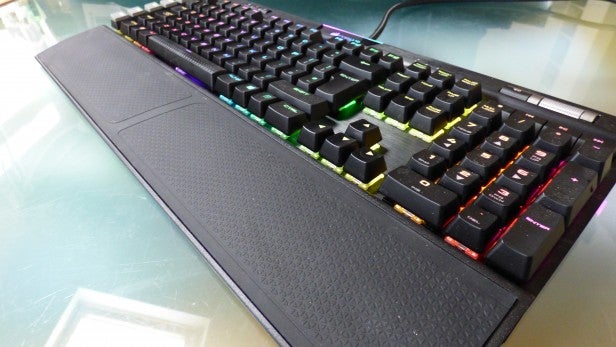 The K95 has a similar design to Corsair’s £170 K70 RGB keyboard, which is no bad thing. The aluminium chassis feels solid and the compact dimensions mean it’s wonderful to use both on a desk or on a your lap, which will be a big deal for the increasing number of gamers that play in their lounge.

The addition of media controls on the top left of the keyboard is also welcome and makes it easy to tweak volumes, players or skip tracks mid-game, which is awesome for crazy people like me that like to have a metal soundtrack while slaying foes.

The detachable palm rest and USB passthrough are also welcome additions that differentiate the K95 from its arch-rival, the Asus ROG Claymore. The lack of a USB passthrough on the Claymore was a serious annoyance that made it difficult to use a headset or mouse when gaming anywhere but directly in front of your computer. The palm rest is also comfortable to type on thanks to its reversible rubberised strip.

The only big design difference between it and the Rapidfire is the addition of programmable macro keys and a “19 zone LightEdge” on the keyboard’s top. Serious RTS and MOBA players will likely bemoan the fact the K95 only has six macro keys, but for most that will be more than adequate. They’re placed on the left edge, which is ideal for quick access.

The LightEdge is a programmable RGB light strip that lines the keyboard’s top. I’ve never been a fan of RGB lighting and the edge is the pinnacle of decadent additions that won’t appeal to everybody. But if you like RGB, you’ll be right at home.

This feature showcases one of the only issues I have with the K95; its software. I’m yet to find a bit of gaming peripheral PC software I actually like, but the Corsair Utility Engine is one of my least favourites. The software is powerful and grants numerous settings and customisation options for the K95, but it isn’t intuitive enough.

This isn’t a big deal for people like me who just set the keyboard to one colour and map keys for specific games, but if making your keyboard play complex light shows is your thing, you’ll likely spend a fair bit of time fiddling and tweaking. Which, for some, is part of the fun.

My only other minor quibble with the keyboard is that it’s a bit of a dust and smudge magnet. Carrying the keyboard to a friend’s house in a backpack, the keyboard appeared to hoover up all the dirt in my bag (perhaps I should clean my bag) while all other pieces of kit, including a Razer Blade laptop, remained relatively pristine. 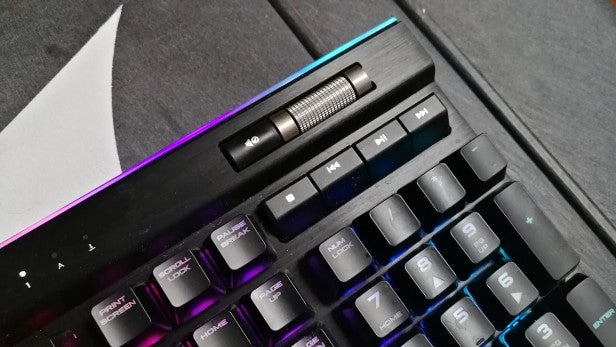 The K95 RGB has the same Cherry MX Speed mechanical key switches to the K70 RGB Rapidfire that focuses on responsiveness above all else. The switches respond from just 1.2mm of movement and 45g of actuation force. In other words, it’s extremely sensitive.

The keyboard is so reactive that for regular typing it initially feels a little strange. It’s also pretty loud, even by gaming keyboard standards, which makes it a poor choice for office environments or mixed living areas. But after a few hours I found myself comfortably using it when I worked from home as the keys are nicely aligned and suitably spaced out to avoid consistent typos.

For gaming I found it to be an outright marvel. The sensitivity made the keyboard a great choice for FPS shooters and games where reaction speed is a key factor – I genuinely felt more agile and skillful when playing For Honor, for example. I can also see the advanced sensitivity being a big draw for eSports players looking for quicker reaction times when playing Dota 2 or Overwatch.

However, it won’t be for everyone. When I let a more casual PC gamer try the K95 Platinum, he found it a little too reactive and complained about misfires during heated exchanges. For these people the Asus ROG Claymore may feel a little more comfortable because it uses Cherry MX Brown-type switches and has a slightly heavier 55g actuation force. 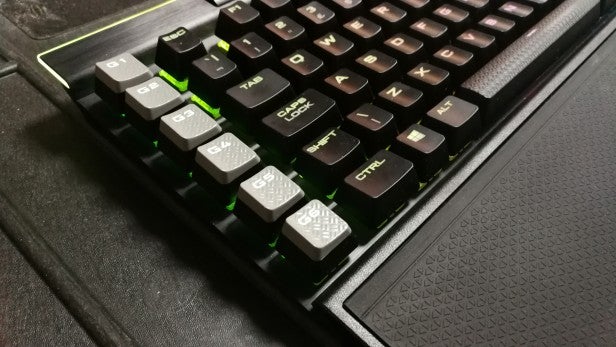 Should I buy the Corsair K95 RGB Platinum?

If you’re a hardcore PC gamer with a penchant for competitive eSports titles and FPS games and you’re the market for a lightning fast mechanical keyboard, then the K95 is a no-brainer.

The Corsair K95 RGB Platinum is one of the most reactive keyboards I’ve used and ticks all the right boxes for competitive gaming, coming with programmable macro keys, media controls, USB passthrough and comfortable, detachable palm rest. I’m not totally enamoured with the RGB lighting and Corsair PC software, but that’s more a personal preference.

The only real downside is that with pricing starting at £200 it’s one of the most expensive keyboards around and complete overkill for anything but fanatically hardcore players.

One of the best gaming keyboards around, but it’s very expensive.