The latest Corsair keyboard has fast, comfortable keys and plenty of features – but it isn't the only option for rapid-fire gaming

What is the Corsair K70 Rapidfire RGB MK.2 Low Profile ?

The Corsair K70 Rapidfire RGB MK.2 Low Profile keyboard features some intriguing new key technology. It breaks from mechanical tradition by using keys that are shorter and quieter than those many gamers will be used to.

However, it costs a pretty penny at £160. There are plenty of rival models, some of which come from Corsair’s own range, so is this low-profile keyboard worth a punt?

Before I delve further into this keyboard, it’s worth taking a minute to clarify the entire K70 range.

Alongside the Corsair K70 Rapidfire RGB MK.2 Low Profile there are eight other keyboards sold with the K70 branding. 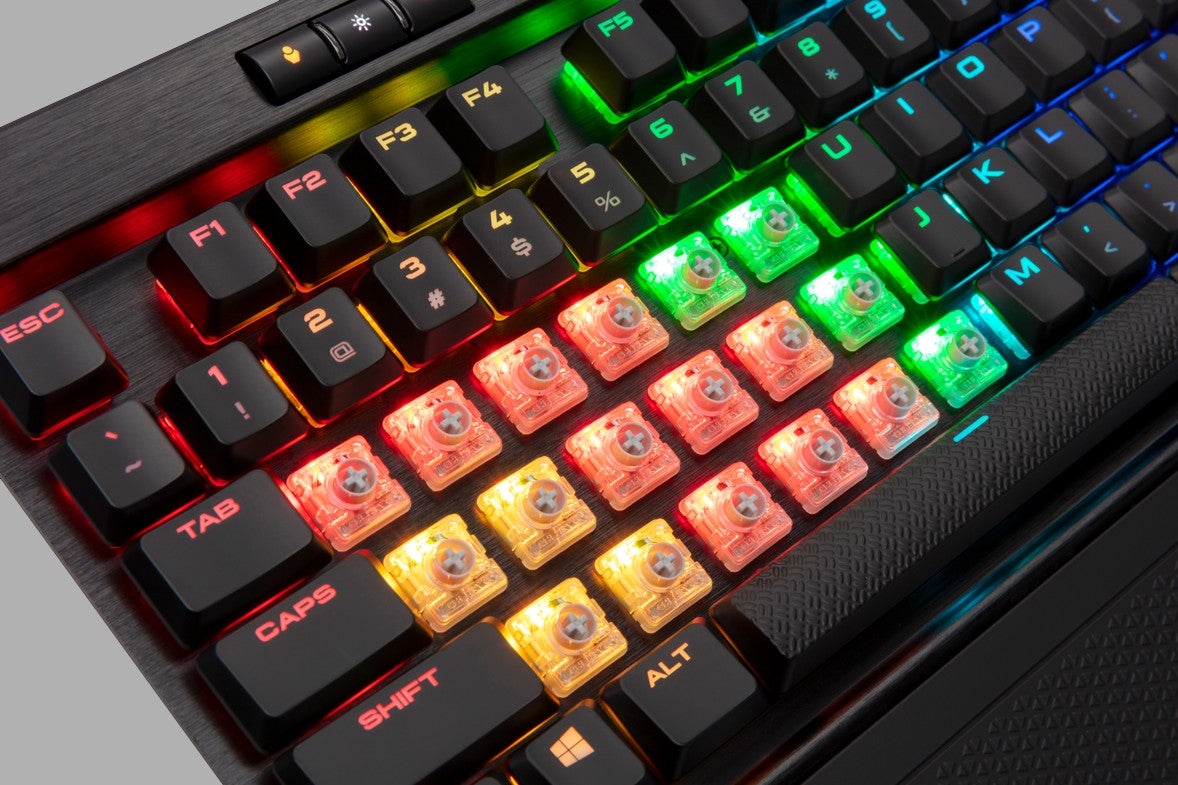 There are two K70 models with low-profile switches: the Rapidfire RGB MK.2 Low Profile with its Cherry MX Speed switches here – MX Speed switches have a low 1mm point of actuation, hence this review unit getting the “Rapidfire” designation –

Outside of the low-profile K70 boards, there are five K70’s with full-sized keys. Three have Cherry MX Red, Black and Blue hardware – switches which function in a normal mechanical way, but with slightly different attributes.

It’s a lot to get your head around, but at least it does give customers plenty of choice.

The model on review here features low-profile switches designed for a faster response than is usual on mechanical keyboards.

The low-profile Cherry MX Speed has just 3.2mm of overall travel. Most other Cherry MX switches – including full-size Speed switches – have 4mm.

These two key figures compare well to the K70’s rivals, too. The Razer Huntsman Elite costs £200 and has a 1.5mm actuation distance and a 3.5mm overall travel distance. The HP Omen Sequencer has higher actuation and travel figures as well.

The switches inside this keyboard retain the 45g operating force required by normal Cherry MX Red switches, plus there’s no tactile bump, so they press down nice and smoothly.

If you prefer the heavier feel and tactile bump of older mechanical keyboards, you’ll achieve that only by opting for a full-height K70 with Cherry MX Blue or Brown switches.

In short, low-profile Cherry MX Speed switches are designed to provide a similar typing experience to normal Cherry MX Red hardware, while making typing faster by reducing the physical distance that the switch has to travel.

This K70 may have a shorter, speedier key design, but in other departments it doesn’t stray too far from the rest of the range.

The brushed aluminium faceplate that looks and feels superb, and the plastic that  features on the bulk of this unit is sturdy – certainly strong enough to be tossed into a backpack for a LAN weekend.

On the base you’ll find grippy rubber pads, and included in the box is a key-removal tool and two sets of textured keycaps. They’re designed for FPS and MOBA players, and have a slightly different texture – but that’s the only difference. 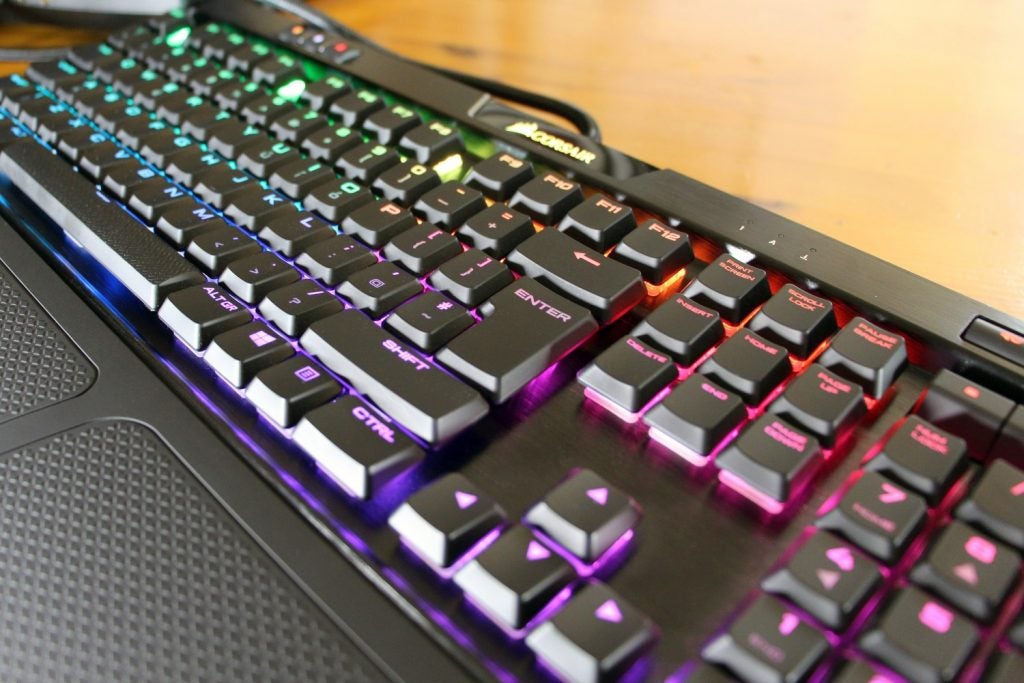 The low-profile keys allow Corsair to bring the K70’s height down to 29mm , making it about a centimetre shorter than units with full-height keys.

On the right, you get five media buttons and a volume roller. On the left is a trio of buttons to deactivate the Windows key, switch profiles and alter the backlight brightness.

The K70 does have a USB port, but it uses the slower USB 2.0 standard – an odd and disappointing choice in 2019. The detachable wrist-rest is far too flimsy, and the font on the keys looks a little dated.

Still, the range of features on the K70 competes well with rivals. The HP Omen Sequencer has dedicated macro keys, and a USB port and a volume roller, but it has fewer media and lighting buttons and is taller and heavier than the Corsair.

The more expensive Razer Huntsman Elite has fewer media keys, no USB port and no macro buttons, but its wrist-rest is better and it has more extensive lighting.

The low-profile keys do have an impact on how this keyboard feels beneath the fingers, but the move to relatively shallow hardware doesn’t cause a drastic change.

You can certainly feel the relatively shallow design on this low-profile model. This isn’t a problem, though; the reduced travel distance means that they feel a little faster than the keys included on full-size mechanical units.

The K70’s low-profile keys have an impressive turn of speed, although it must be said that the small differences between low-profile and full-size keys will mean that only the keenest gamers will notice a significant speed increase when using this particular K70. If you’re a big FPS fan, or if you do play a lot of eSports, then this particular K70 may well be a good upgrade from a normal mechanical unit. 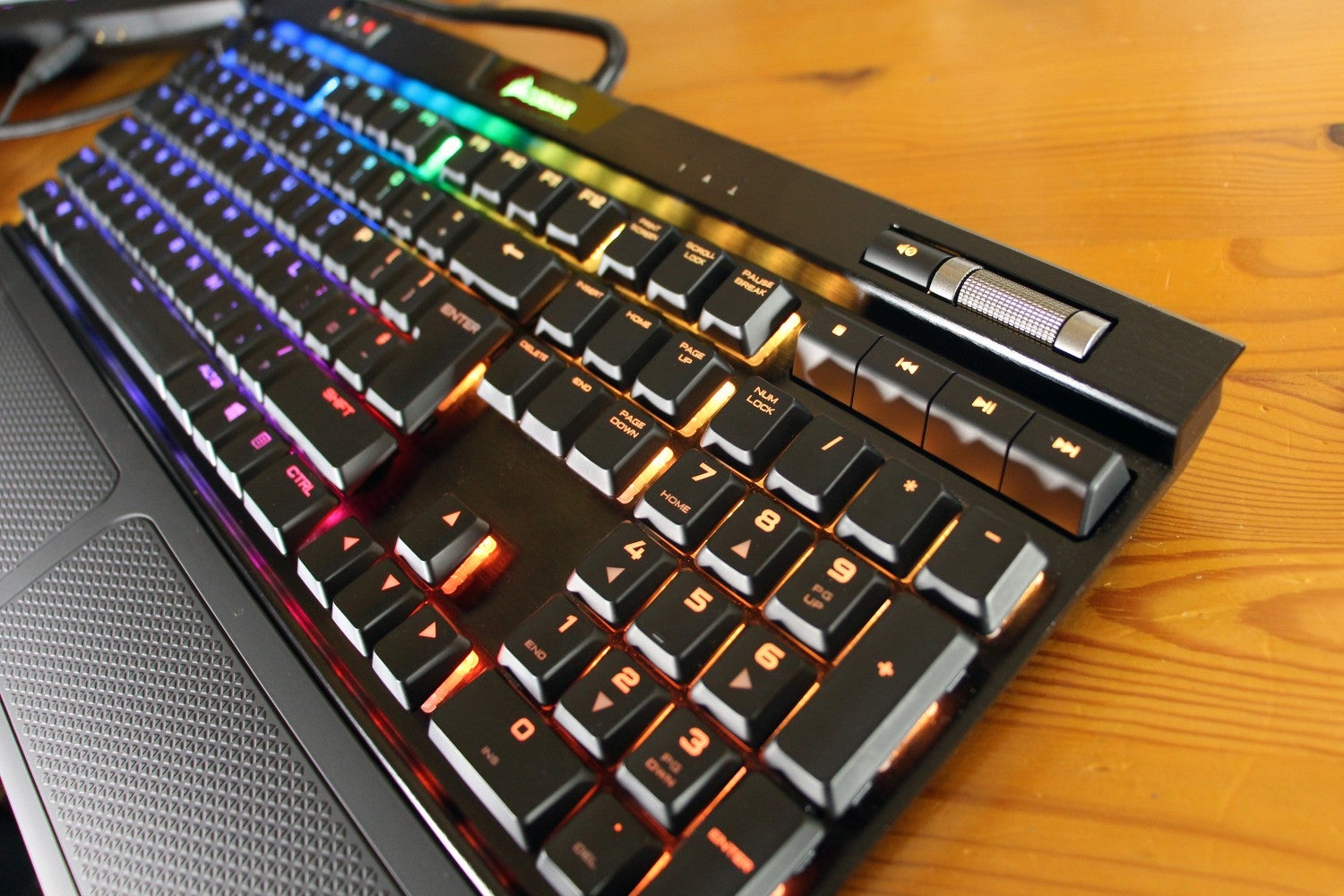 However, the low-profile design isn’t all good news. These buttons do have a tiny lack of crispness when compared to full-size Cherry MX switches.

So the buttons are faster but a little softer. But these differences are still extremely subtle. That means the low-profile K70 is still just as good as normal mechanical keyboards for casual and demanding games, and it will be fine for most people.

Only the keenest of eSports players will find that this model doesn’t have quite as much snap in its buttons as they may be used to – and, even then, the slightly softer feel is subjective and is unlikely to impact the quality of your gaming. 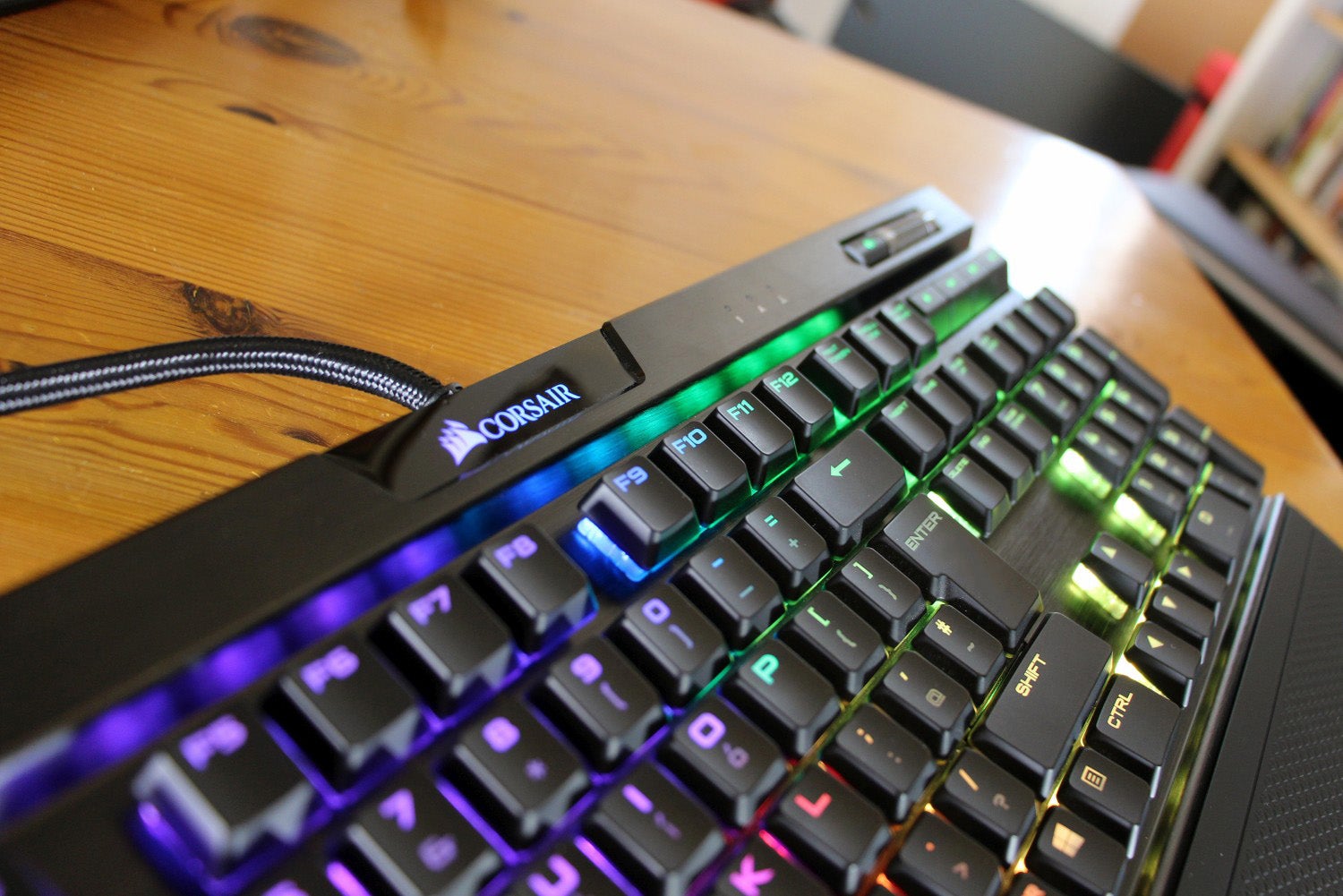 The K70 compares well to full-height mechanical hardware, but it does face a new challenge: lasers. The Razer Huntsman Elite and HP Omen Sequencer both use lasers to actuate rather than a conventional mechanical design, and both claim that their new technology responds in just 0.2ms – rather than the 2ms response times of most mechanical units.

And, indeed, the lasers do work well. The Razer does actuate with a tiny bit more speed when compared to mechanical hardware.

It may be better to look for a laser-based keyboard if you do need the fastest keyboard around, then. But, just like the differences between full-height and low-profile mechanical hardware, the gaps between low-profile speed switches and laser keyboards are slim – and so only the most demanding gamers will really benefit.

As ever, Corsair’s lighting is controlled with its iCue application and features all the usual options. You can alter every key individually alongside the Corsair logo at the top of the device, or you can pick more than two-dozen types of predetermined lighting effects – from basic gradients and ripples to more complex options.

These patterns can be customised, too, to create even more complex scenarios. And you can even turn the lights off, or to one static tone, if that’s more your style.

Macro recording can be found in the same module as the lighting options, and you can save as many different profiles using this software as you like, even if only three can be stored on the keyboard itself. 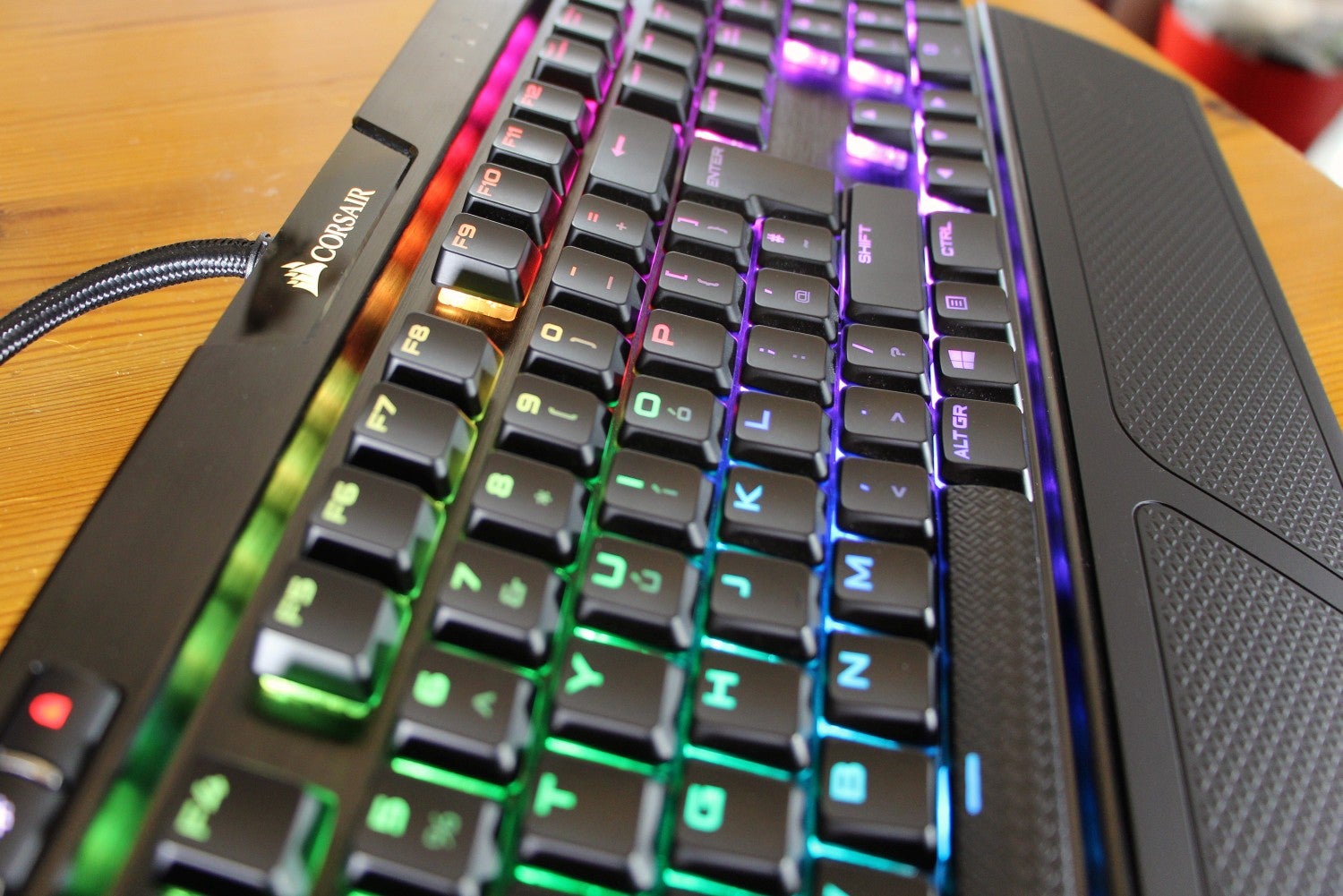 A small Performance tab allows you to disable intrusive keys for gaming. It’s also possible to synchronise the K70’s lighting with other Corsair hardware, and to load predefined profiles that work with individual games.

The lighting itself is decent. The keys stand proud of the aluminium fascia, so plenty of light emerges from beneath to lend an attractive glow to the whole unit.

The lighting is strong and even when blaring through the main lettering on the buttons, too, although larger keys and those with two or three characters have more inconsistent and weaker lighting on those extra characters.

The Corsair K70 Rapidfire RGB MK.2 Low Profile is an impressive bit of kit. There’s plenty to like about the low-profile Cherry MX switches: they’re faster to actuate and depress more fully than other Cherry MX devices, and they feel a little softer than full-height hardware.

They’re quieter than full-height keys, too, and the overall experience is far better than many cheaper, alternative low-profile units that use soft, sluggish membrane hardware.

The fine margins mean that only the keenest of gamers will really benefit from the Rapidfire’s extra speed, and only the fussiest of players will complain about the slight extra softness. Similarly, laser-powered rivals such as the Razer and HP offer a bit more speed – but few people really need that.

Indeed, the vast majority of gamers will be as happy with this low-profile unit as they would with full-height Cherry MX Red hardware.

Elsewhere, the K70 offers decent features, including solid RGB LED lighting, plenty of media buttons and excellent build quality. It looks good, too, and its shallower height makes it easier to transport.

If you want something sleek and feature-packed, then the Rapidfire fits the bill – and provides the fastest pure mechanical experience around.

The Corsair K70 Rapidfire keyboard has fast, comfortable keys and offers plenty of features – but it isn’t the only option for rapid-fire gaming. If you prefer the feel of heavier, taller mechanical switches – or if you need lasers to provide more speed, then look elsewhere.