Corsair’s latest gaming headset is an undeniably impressive proposition. From the premium look of its metallic grills to the pleasingly ‘clickity clack’ scroll of its volume-wheel, this is a headset that justifies the undeniably steep price tag. As a gaming headset it’s hard to fault, made an even better value proposition by its surprisingly impressive music performance.

The Corsair HS75 XB Wireless is the latest entry into the growing sea of new Xbox Series X/S gaming headsets.

Boasting stellar audio quality, crystal clear voice delivery and exceptional noise cancelling this is an audio extravaganza with clear aspirations to earn a place among the best gaming headsets on the market. Combine that with an impressive wireless range and some of the most comfortable ear pads I’ve had the pleasure of wearing, and the result is a near-perfect Xbox headset.

I say near-perfect, because there are a couple of areas where Corsair’s coveted cans just miss the mark. Touted as a headset for both Xbox owners and PC gamers, you’d be forgiven for thinking that after shelling out almost $200/£200, you’d be good to go on both devices. You’d be wrong.

Standard Bluetooth connectivity is completely absent. The headset instead connects to PCs using the proprietary Xbox wireless standard, so if you plan to use it this way you’ll need to buy an adapter separately, which is a minor pain. For those who already own one this is less of an issue, but with that extra investment bringing your total expenditure to $200/£200, it’s worth noting.

The Corsair HS75 XB Wireless is available to now from multiple retailers, including Amazon, Scan and Very.

Forgoing the plastic-y Fisher Price aesthetic of its rivals, the Corsair HS75’s mat black finish and metal grills immediately makes a statement – this is a premium headset. Yet, while the sleek black finish and minimal design immediately impress, it’s the other more tactile aspects that really cement this as a grown up’s headset.

The mostly metal cans fit surprisingly gently on my head, with its memory foam pads melting onto my ears. Despite the tall frame looking a bit like a head clamp, the soft leatherette top keeps your dome feeling nice and comfy. While cheaper headsets often see me scrabbling to remove them after a few hours to give my poor head a break, the HS75 feels like a far better I’m gaming all day in my PJs’ companion.

Where most gaming headsets offer a fairly standard volume, here turning the audio up rewards me with a pleasingly premium satisfying click. Nestled next to said ‘clickity clackity’ wheel is an audio mute button and a USB-C charging port. In a nice touch, there’s also a game chat filter scroll wheel on the other can, giving players the option to completely zone out shrieking children in online lobbies and just groove to those sweet, sweet, menu beats. We’re looking at you, Apex Legends. 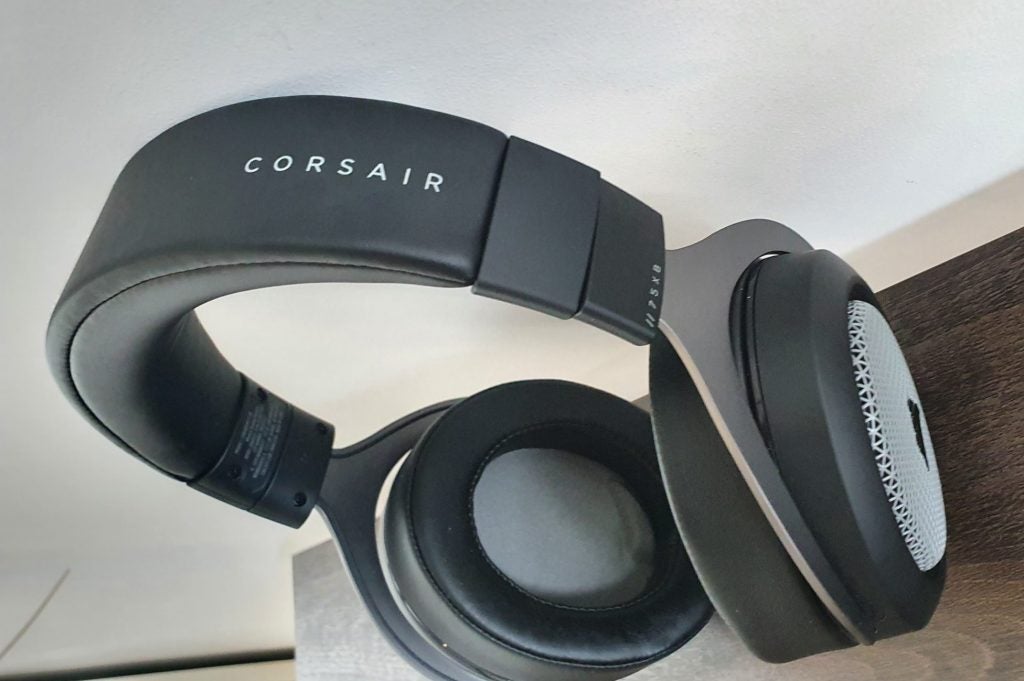 The other notable design feature is the HS75’s detachable microphone, although you won’t really be able to wear this headset out of the house given the lack of smartphone compatibility.

This headset connects wirelessly to either your Xbox or PC. To set up on Xbox, merely hold down the sync button on both console and headset, as if you were connecting a controller. After that you’ll want to download the Dolby Atmos app on Xbox, and then you are good to go. It’s a similarly painless process on PC, where you’ll need to update your Windows 10 Drivers and then you can connect the HS75 via the Xbox Game Bar.

However, you’ll need to purchase a separate adapter to sync it up with your PC, making that already hefty price even more difficult to swallow. If you already own the Xbox Wireless adapter for PC, the Corsair HS75 becomes an infinitely better value proposition. There’s also no headphone jack on board, so you can’t swap it over to a wired connection, limiting the number of compatible devices.

Corsair’s latest Xbox offering is somewhat of an audio all-star. Even when playing the most intense of games, the sound space feels wide and clear, with everything from music, effects and dialogue sitting comfortably and clearly in the mix – unlike the cramped, chaotic cacophony you often get with a lot of cheaper headsets.

Tearing up the British countryside in Forza Horizon 4, the sounds of my roaring engine seamlessly interweaves with the rumbling bassline of At The Drive In’s ‘no wolf like the present’. As my tyres snarl to escape the mud and the thud of a fence hits my bonnet, Forza’s brilliant sound design loses none of its punch to the increasingly chaotic composition from the Texan punk quintet. 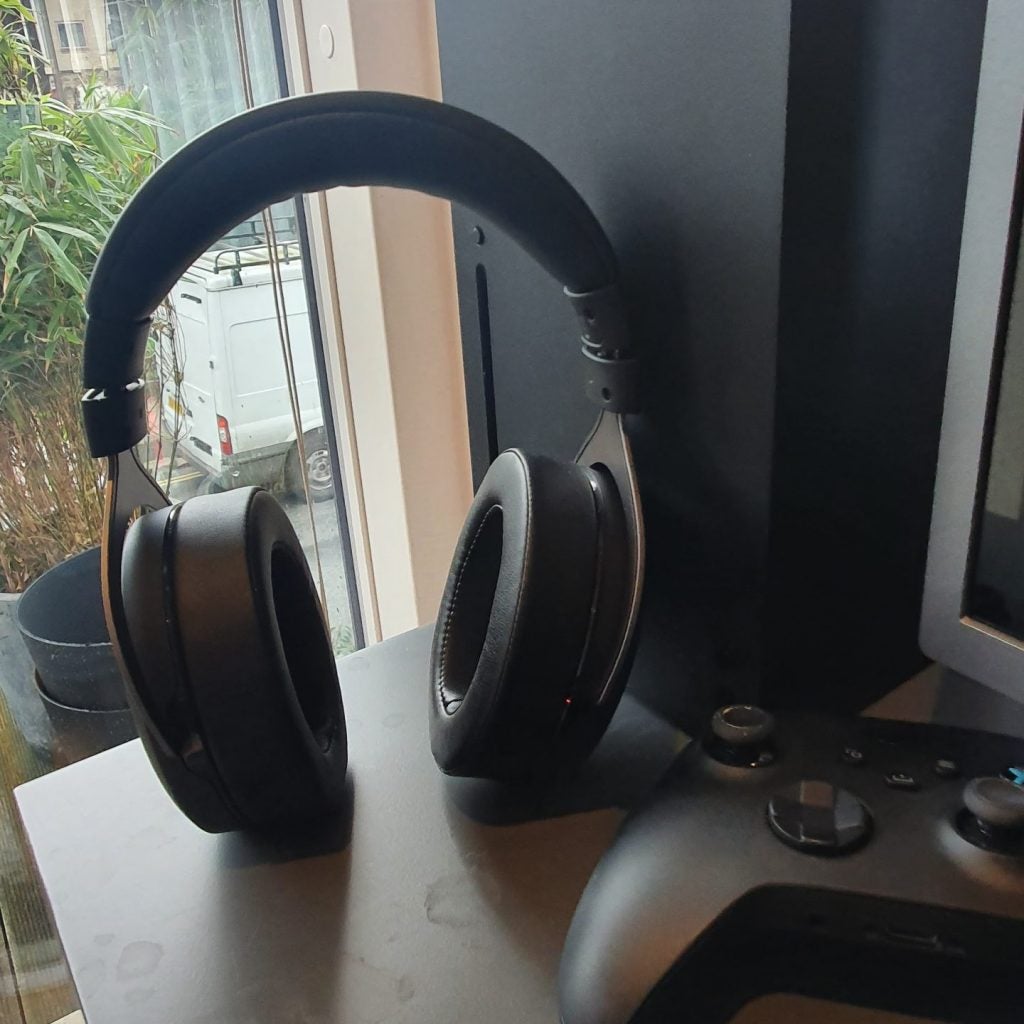 Hopping into my go-to headset test, Doom Eternal, the HS75 once again offers an astounding sense of clarity in one of the most audio-intensive experiences in gaming. Ripping and tearing through a horde of screeching demons, each gunshot, explosion and gut-wrenching scream comes across with a satisfying sense of clarity, nestling snugly atop of the downturned chugs of Mick Gordon’s guitar.

Given just how much is going on at any given second in ID Software’s latest, the clarity and wide range to the mix is a hugely impressive feat, making an already controller-clenching shooter that bit more immersive.

Still, too often where gaming headsets can disappoint is in how they handle story-led dialogue. Thankfully a lengthy session of Dontnod’s dialogue-heavy adventure Tell Me Why sees the Corsair breeze through, with emotive lines ringing through with a pleasing sense of clarity.

As a pair of cans just for listening to music, Corsair’s Xbox offering holds up just as well. Paired with a PC via Microsoft’s dongle, the pleasing thud of the sub bass drop in TokiMonstas ‘Put It Down’ sits unobtrusively in the mix, allowing the song’s subtle cacophony of vocal harmonies to shine through behind the main hook with rare clarity. It’s a feat that impresses across multiple genres and once again, the HS75’s commendable range sees it comfortably outclass many of its peers.

The HS75’s battery life, however, is less remarkable. Offering around 18 hours of use on a single charge, it’s hardly abysmal, but when compared to recent 25-30 hour efforts from Logitech and SteelSeries, it feels a little disappointing.

The roaming range on Corsair’s latest is pretty generous though, featuring a wireless range of 30 feet to give you plenty of range to pace around your living room mid Zoom call.

What’s a gaming headset without a quality microphone? Predictably, this is another area where the HS75 excels. The microphone here is completely detachable, allowing you to slot it in whenever you please.

Boasting a unidirectional noise cancelling wire mic, this unassuming-looking attachment delivers the goods, offering impressively clear and crisp voice chat regardless of where it’s positioned on your face. 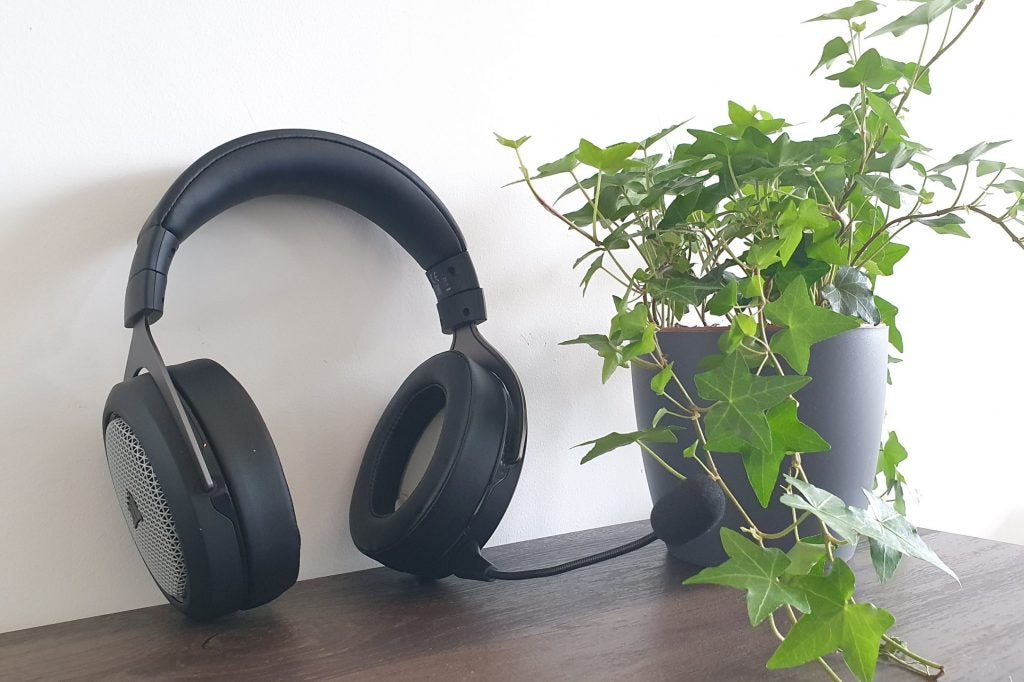 While curving the microphone closer to my lips undoubtedly yields the best results, it’s nice to have a mic that simply works the second I plop the HS75 on my head, doing away with the tedium of constant adjustments to find that perfect vocal sweet spot.

It’s nice to see that the words ‘noise-cancelling’ aren’t just empty buzzwords. For city dwellers, the noise-cancelling is mercifully effective, doing an admirable job of amplifying my voice mid-party chat and squashing the abrasive sounds of the honking car horns outside my window. Testing party chat while running the dishwasher in the same room, the bleed was barely noticeable, with only the almighty roar of the washing machine’s final spin cycle dropping a guest vocal into my game chat.

If you’re looking for a premium and stylish Xbox headset, you’d be hard pressed to beat Corsair’s HS75 XB Wireless. Comfortable, exceptionally designed and packing an audio punch, this is one of the best gaming headsets on the market, let down only by middling battery life and somewhat limited device compatibility.