For what is normally such a functional item, Corsair has been very successful in talking up the prospects of its Flash Voyager range of USB memory keys. Its pedigree in high performance memory has certainly helped, while the ultra-durable casings make for a handy marketing angle. Voyager memory keys have reportedly survived microwaving, boiling, baking, freezing and various other assaults and the data stored on them has survived.


Recently Corsair was kind enough to drop by and hand us the 8GB version of its Flash Voyager GT, the performance edition of the range. The look of the device hasn’t changed a great deal since the original Flash Voyager, though the GT sports a black and red rubber casing as opposed to blue and black. 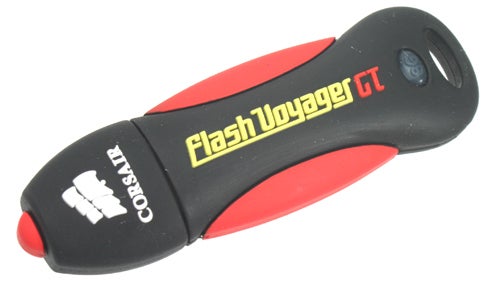 That the rubber casing is sturdy is not in doubt, but the durability and quality of memory means this isn’t the smallest or most convenient memory key one can find. This can hardly be considered a real detractor however; it’s only big by increasingly demanding standards and the extra durability is certainly worth the sacrifice.


In the package Corsair provide a lanyard, for carrying the device around your neck, and a short USB extension cable. It’s all fairly standard stuff, but it’s good to see it included nonetheless and both items are of a superior quality. The device also comes with TrueCrypt security software loaded onto the device, utilising AES-256 encryption for keeping private data private.

Perhaps the most important thing though is the warranty. Every Flash Voyager GT comes with a massive 10 year warranty, so if performance of your flash drive begins to falter you’ll have somewhere to go. It’s certainly an important consideration, and reflects Corsair’s trust in its hardware that it can provide such a service.

Of course, the main concern is performance. For testing I’ve compared the Flash Voyager GT with the Kingston 1GB DataTraveler ReadyFlash and a generic 2GB memory key of which there are many in the TR office.


For testing I began by testing ReadyBoost performance using PC Mark 05’s HDD Tests on a laptop running Vista with an Intel Core Duo T2500, 2GB RAM and a 120GB hard drive. Tests were conducted three times with no ReadyBoost, and then three times with 1GB of ReadyBoost with each USB key. The system was restarted before each new test, and an average was taken from the three results. 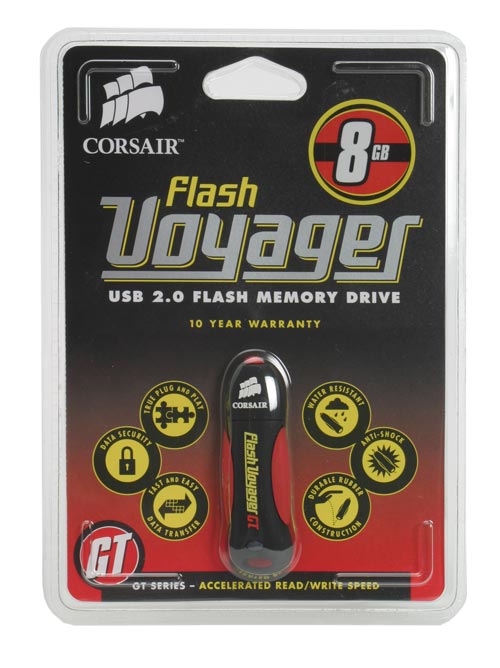 The control score, with no ReadyBoost, was 2948. With 1GB of ReadyBoost the Kingston came out on top with an average of 4014, but second was the Generic flash drive with 3920 while the Corsair Flash Voyager trailed with a modest 3345. To say the results were puzzling is putting it mildly, and resulted in no small amount of head scratching and frustration. Having run the tests with the same results each time two theories came to light; either the Voyager GT has lower access times or Vista simply didn’t like it for some unknown reason.


This does tally too, because of all the drives the Corsair was the only one to fail to initialise properly during boot-up. Whether this is a problem with the device drivers, or with Vista, is difficult to determine but to check on the access times I ran HD Tach 3.0, a synthetic benchmarking tool for testing hard drives and flash memory. 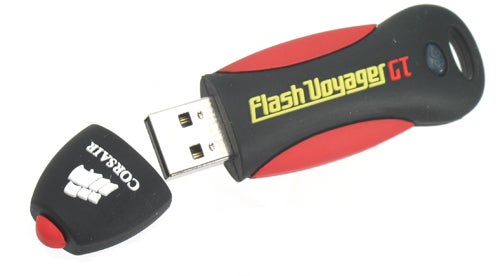 The tests showed that the Voyager GT certainly doesn’t have a problem with access times, with an excellent 1.1ms random access time while the Kingston trailed with 1.6ms and the generic drive with 2.1ms. In which case one can only surmise that the ReadyBoost tests are an anomaly, so it’s best not to read too much into them other than to say the Voyager GT may have an issue with Vista – or vice versa.

To examine the read and write speeds of the device I’ve favoured real-world tests over synthetic benchmarks, using more or less the same methodology as with the ReadyBoost tests. Each test was run three times, with the system being restarted before each instance and an average taken from the three timings then converted into Megabytes per second. I ran two identical tests for reading and writing, a large file test using a 700MB video file and small file test using a 145MB folder full of images. 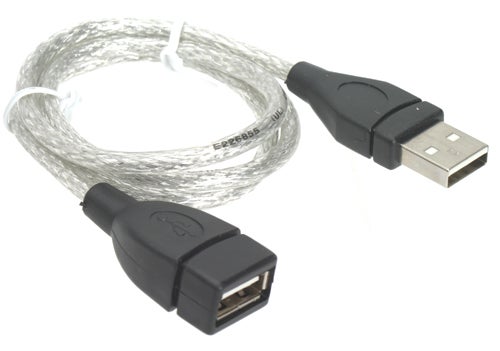 The large file test demonstrated where the real strength of the Flash Voyager GT lies. It was way out in front with an impressive 20.6MB/s, with the Kingston going at 16.2MB/s and the Generic drive at a measly 6.6MB/s. Considering its large size this is certainly a desirable result, and that difference in speed will only be further evident the larger the file you transfer.


The small file test, however, saw the Voyager GT sacrifice its advantage. The Kingston drive averaged 10.4MB/s; the Voyager GT 7.1MB/s and the generic drive 4.1MB/s. 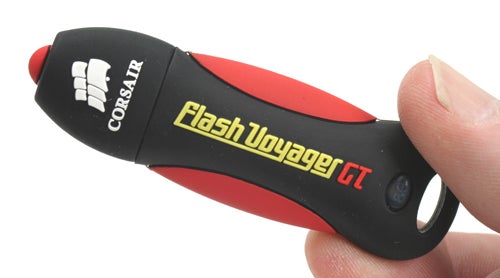 Reading tests panned out in a similar fashion, with the Corsair galloping out in front with the large file read averaging a superb 27.7MB/s with the Kingston trailing at 17.2MB/s and generic stick at 14.2MB/s. What’s also worth noting is the consistency of the Voyager GT; while the other two tended to fluctuate by a second or two – and sometimes more – the Corsair device was within tenths of a second during each run. This, and the astounding speed, show the quality of the memory used.


With the small file test the Kingston won again, with an average of 16.7MB/s, while the Voyager GT followed at 12.9MB/s and the generic memory at 9.7MB/s.


Although in some situations the Flash Voyager GT isn’t necessarily the quickest, the large file performance is intimidating for its speed and consistency; while it’s small file speed is still well above the average. Importantly, however, you’re not just getting high performance; you’re getting high-durability and peace of mind as well. A generous ten-year warranty covers any problems, and the Voyager GT also comes with TrueCrypt Security encryption for data security. All-in-all it’s a great package, offering superb features, market leading performance and great value to boot. If you want a reliable, large and secure flash drive then there’s no where else you need to look.