This is going to be an unusual review. The product is Corsair CM2X4096-6400C5DHX memory which is a pair of 2GB DDR2-6400 modules that has a total capacity of 4GB. The DHX suffix denotes that the modules use Corsair’s funky Dual-path Heat Exchange technology to keep the memory cool. You can buy CMX24096-6400C5 without DHX for £72 but you only pay a trivial £4 more for DHX so you may as well go the whole hog and splash out £76 for the full Monty version.


But that’s putting the cart before the horse.


There are two strange aspects to this review. The first is that the rated speed of the Corsair is only DDR2-6400 or 6.4GB/second with a true clock speed of 400MHz. That’s an effective speed of 800MHz which is perfectly adequate for any processor on the market however it’s not the sort of thing that we usually review as memory of this speed is a commodity product that has little headroom for overclocking. 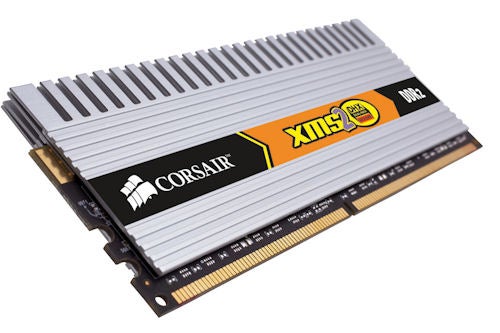 The second peculiarity is that this Corsair kit is 4GB (2x2GB) in size when most sets of memory are 2x1GB. There are a number of hardware and software issues that have lead to 2x1GB becoming the popular standard but the real kicker is Windows which uses a 32-bit addressing system that limits it to 4GB of memory (well, 4,294,967,295 bytes to be precise).


It’s well worth reading up on this subject as the 4GB limit has historically been so enormous that it didn’t affect PC users. In the days of Windows 98 we were limited to 512MB, and most of us were happy with 1GB to run Windows XP and find that 2GB is quite luxurious. However, Vista is a different beast and needs 1GB of RAM to run while 2GB is a sensible amount if you want to run games, edit video, or do a lot of multitasking. So many new PCs and laptops are already running at the ceiling of the amount of RAM that you can sensibly install.


Hopefully, you’ll have spotted the flaw in my line of thinking which is that anyone who runs 32-bit Vista with 2GB of RAM has the option of upgrading to 4GB but, while that is true, the benefits of doing so are limited.


Whether you install 4GB in two 2GB modules or four 1GB modules it is most unlikely that 32-bit Windows Vista will show 4GB of RAM is present and correct. I shan’t waste your time by recycling reams of technical papers from the net but there’s an especially pithy summary here.


Here are the first couple of paragraphs:

I just bought a system with 4GB of physical RAM in it. The BIOS posts 4GB, but Windows tells me that I have anywhere from 2.75 – 3.5GB of RAM. Where is the rest of my RAM?

If you are running 32-bit Windows, you must live with it. You will not ever see all 4GB of RAM you’ve paid for.


If you are running 64-bit Windows, you may have to live with it. Depending on your motherboard’s chipset, your system may support memory remapping. If so, you will be able to use all 4GB of RAM. ‘

The problem is that 32-bit Windows can address 4GB of memory but that includes all of the system memory and devices in your PC. Again, the specifics are rather complicated but essentially many parts of your computer have small bits of memory that need to be addressed so even in a basic system you’ll never see the full 4GB. Factor in a high-end graphics card and things actually get worse as the 512MB, 76MB or even 1024Mb of memory on the graphics card has to be included in the addressable space. This means a high-end system with 4GB of RAM may only be able to use 3GB of RAM.


This is perfectly illustrated by our screen grab from 32-bit Vista. In fact we had a 4GB Corsair kit installed but Windows was only ever going to show 3.5GB on this set-up and there was 512MB of memory to be deducted for the graphics card, hence the 3GB figure. 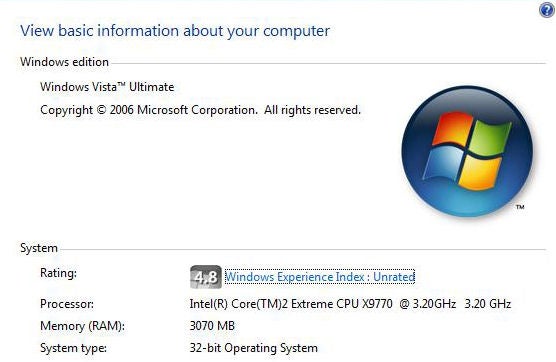 So what would happen if we installed a pair of Radeon HD 3870 graphics cards in CrossFire on our Abit IP35 Pro? That’s another 512MB of memory to account for which would reduce the total to 2.5GB so a 4GB kit would only show a small increase over the 2GB that most of us use at present. If you’re an avid gamer who is planning on going the whole hog by installing four graphics cards in CrossFire X you can expect to have 2GB of video memory which would only leave 1.5GB of address space for system memory.


And that’s not the worst of it!


On the one hand the amount of system memory that is available is going to diminish as you increase the graphics power in your PC yet on the other you can be sure that games and applications will demand more from your system in the future, including the memory.


If you run software such as Process Explorer, from Sysinternals, in the background you’ll see that games such as Crysis can use in excess of 1GB of memory while screen shots that we’ve seen of Company of Heroes show it has been allocated a colossal 3GB of RAM. That’s a hefty chunk of the available resources and if you hit an especially heavy-duty map – or the developers make a mistake – it’s easy to see that you can run out of memory. 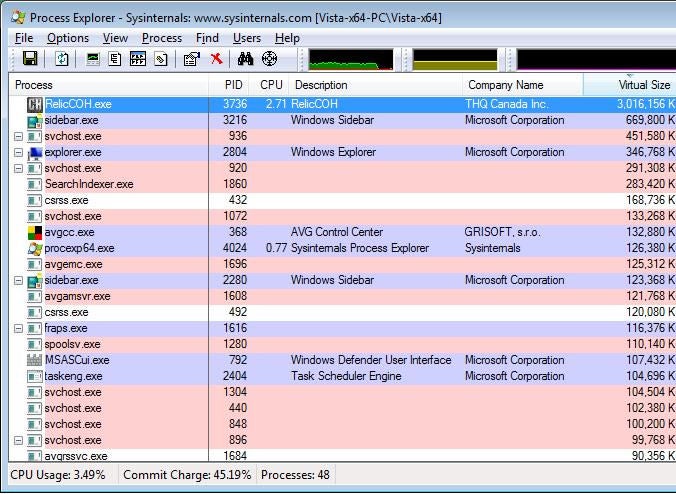 Fundamentally, you’re unlikely to see a huge boost in performance moving from 2GB to 4GB if you’re running a 32-bit operating system. However, that’s not to say there will be no benefit.


As mentioned, if you take a reasonably high-end system with a graphics card with 512MB of onboard memory, you’re likely to end up with about 3GB of useable system memory, which is still an improvement over 2GB. Moreover, if and when you you do move to a 64-bit operating system (64-bit operating systems are able to properly use up to 17,179,869,184GB of RAM) you’ll have plenty of RAM to go along with. So, if you’re still using Windows XP, moving straight to 64-bit Vista in a few months (when service pack 1 is released, perhaps) is the perfect upgrade path.

As I said at the top of the piece this is a strange review because primarily we’re looking at the effect of 4GB of memory and the fact it is Corsair is secondary. The fundamental points apply equally well to any make of memory almost regardless of the speed. That said, the one obvious thing this Corsair 4GB kit has going for it is it’s incredibly cheap.


To test the memory we built a Core 2 system with a Q6600 processor on an Abit IP35 Pro motherboard. We had two 4GB kits of Corsair and while it is only certified to run two-up (two modules, 4GB) we also gave it a go in four-up with a total of 8GB installed. We started with Windows Vista 32-bit Ultimate Edition and then switched to 64-bit. You get both versions in a retail package of Windows Vista Ultimate Edition so the cost of 64-bit is effectively free provided you have already bought the horribly expensive 32-bit boxed software.

Using an MSI GeForce 8800GT graphics card as an example of a regular graphics card and a pair of Power Color Radeon HD 2900 XT cards, which each carry 1GB of memory, as a pseudo-CrossFireX set-up we let rip. Our synthetic test was the usual 3DMark06 and for a real world test we used Crysis.

Process Explorer shows that the Virtual Size of the memory for the CrossFire arrangement was higher than the single 8800GT but all the figures came in around the 1GB mark. The peak memory load was very similar in each case at 725MB-749MB and FRAPs shows that the frame rates were amazingly consistent in all of the scenarios.


It’s a surprise that 2GB of RAM in Windows XP works so well although the numbers suggest that the game is on the verge of running out of resources at any moment. Switching to 64-bit Vista with more memory doesn’t pay a dividend in Crysis but only because the 32-bit version is clearly inside a limit of 2GB. Having said that, if Crysis didn’t play properly on a PC with 2GB of RAM you’d have to say that Crytek had lost their marbles as they would have cut off the entire installed base of PCs at one fell stroke.

Until I started testing these Corsair kits, the idea of 64-bit Windows seemed quite absurd but that has all changed. I am now convinced we’re very close to the point where 2GB of RAM will be inadequate so when I do finally ditch XP for Vista on my personal PC I am quite sure that I shall plump for the 64-bit version of Vista Ultimate. The only question is whether I shall make the move during 2008 or hang on until 2009.