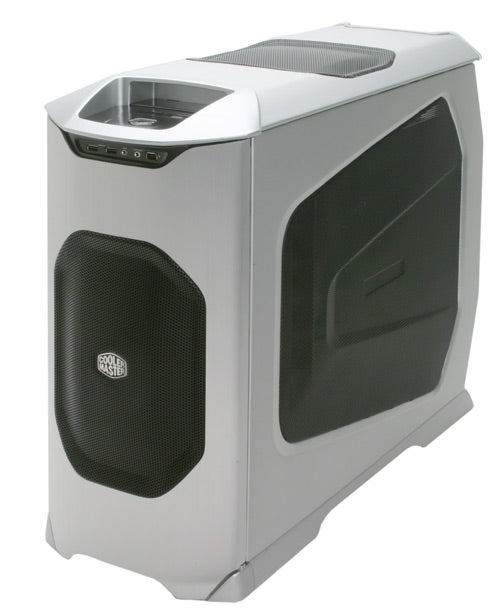 Cooler Master has a reputation for cases geared towards the enthusiast and its Stacker range of chassis have been immensely popular, being amazingly well built and very functional – especially if you have large water cooling or require plenty of fans.


The latest incarnation of the Stacker is the 830 series. From the outside it looks very different to the previous models, with its solid aluminium door and a much more rounded look. As cases go, it’s certainly on the large side at 540mm x 250mm x 640mm. Clearly, you’ll need to clear some desk space or for-go some leg-room. 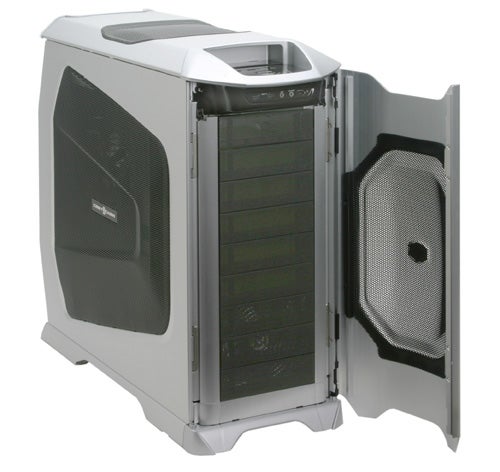 The door looks quite smart, sporting a front grille. The grille is mainly for looks as there is an ample amount of space at the bottom of the door for airflow. For most cases, when you take a door off it looks a little ugly as you can still see the where the door attaches. However, because this case is designed to have the door hung on either the left or the right, the four holes for the hinges are not only discreet but are symmetric too. The hinge is spring-loaded and comes off much in the same way a loo-roll holder does. Once removed, it has a striking resemblance to a medieval shield and those with a good imagination may find other, perhaps battle related uses for it. 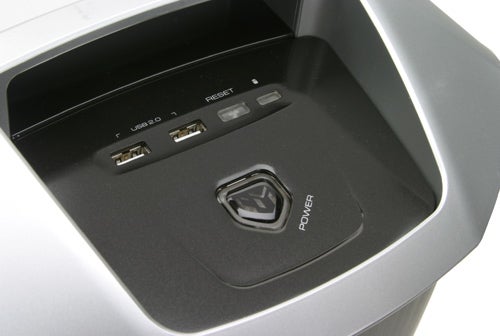 The power button area looks like it wouldn’t be out of place on a Stargate Atlantis set. There’s a strangely shaped power button, backlit with a blue LED and two USB ports with a flush reset switch. At the very top of the case front are two more USB ports, a headphone, microphone and a six-pin Firewire port. These are thankfully accessible even when the door is shut.


There are no case screws holding the side panels on, but instead a plastic lock much like you’d see for attaching lights to mountain bikes. By pushing these in, the doors just pull off. If you’re like us, case screws always end up unused, for easy access to a PC’s gubbins but this is a better solution offering ease of removal without any rattles or doors falling off in transit. 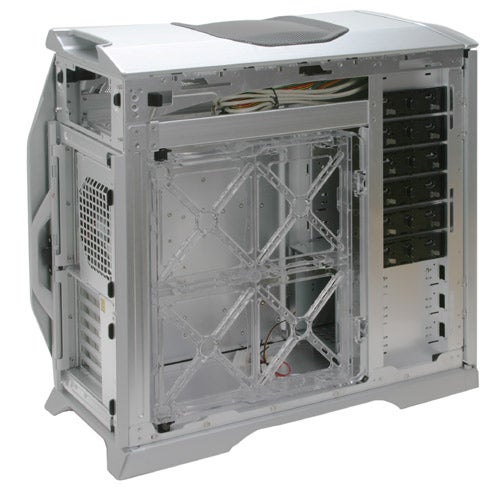 Once the side panels are removed, you’re greeted by yet another swing door, but this time designed as a holding cage for up to four 120mm fans. Considering the side panel is almost one complete grille, airflow is aplenty. A couple of 120mm fans running at a low spin speed should provide plenty of air without damaging ear drums.

At the very rear of the case there is a mount for another 120mm fan, which is included. Finding specifications for this fan was nigh on impossible, but when powered up it produced very little noise and pushed an adequate amount of air.


The general construction of the chassis is excellent – strength and weight are certainly not an issue here. Thumb screws hold the blanking plates in place, making this case almost completely screw free.


The case doesn’t come with a power supply, but one is easily fitted by removing the plate at the rear of the case. The motherboard tray is also completely removable – two quick release tabs are all that holds you back from sliding the tray out. 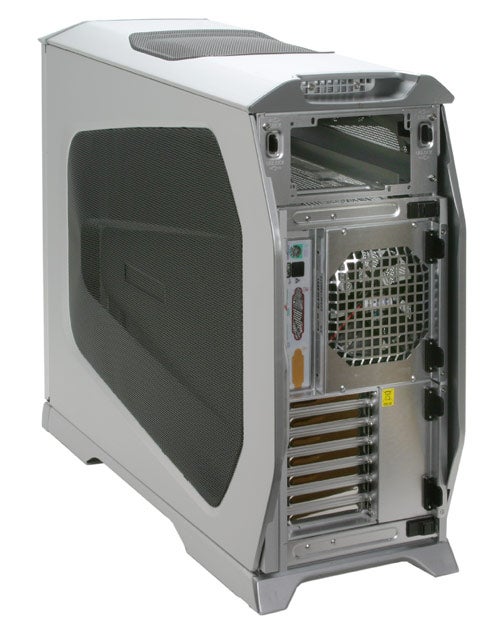 Similar to previous stackers, it has a cage supporting up to four hard drives. This takes up three of the nine 5.25in bays and can be fitted anywhere from top to bottom. At the front of this cage, a 120mm fan is mounted. The fan is identical to the rear fan, but has four blue LED’s and is translucent. For some reason there’s a grille on the fan, despite it being completely inaccessible by even the smallest fingers and all it really does is hinder air flow.


If four hard drives isn’t enough for you, there are another six 5.25in bays available – so by use of an adapter, hard drives could be fitted here. One adapter is provided, but this is with the intention of fitting a floppy disk drive. Fitting optical drives is an easy affair with a screwless system – drives lock in to place by simply pushing a plastic tab. We managed to break one of ours when attempting to fit an optical drive, so the system is not faultless. Although the drives stay in place, there’s a certain amount of wobble, which can manifest itself as vibrations when using an optical drive.


Cooler Master supports the new BTX standard too and all the required ducts are supplied if you wanted to build such a system. 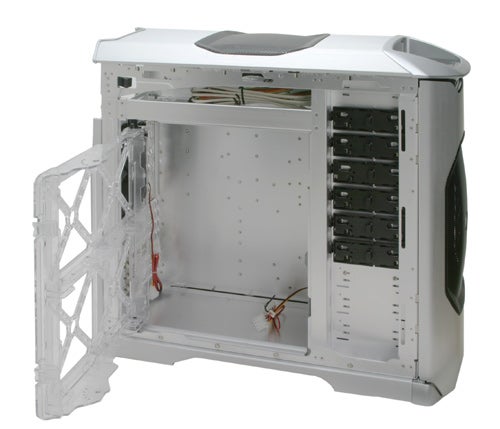 At the top of the case is room for yet another 120mm, which could also double up as an area to fit a radiator for a water cooling kit. In fact, Cooler Master will be selling conversion kits for its own line of water coolers.


The Cooler Master Stacker 830 is an attractive, solidly built chassis that would make a good basis for any machine. At £173.84 though, this is a lot of money for a case. On the up side, this case is built to last and with support for BTX it could house your components for years to come. If you have the money, it may well be a wise investment.