If two water cooling kit reviews in as many weeks isn’t testament to the increasing popularity of water as a viable alternative to air for CPU cooling, then the ever swelling list of products available to choose from surely is.


As sales in these water cooling kits have grown, we’ve seen more companies taking much more care with the design of the components. This has led to more compact designs and consistent use of the correct size of connectors instead on the not uncommon sight of reducers, spacers, adaptors and general ‘dohickeys’ all cobbled together just to get the unmatched components working together on the same circuit. 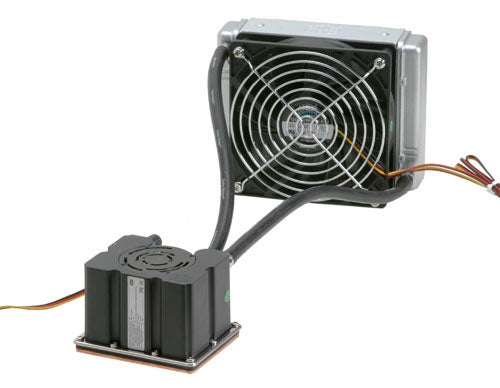 The kit I’m looking this time comes from Cooler Master and is called the Aquagate Mini. Though the company is better known for its case and air cooling products it seems willing and able to use its resources to tackle just about any cooling solution.


The Aquagate Mini boasts a rare, though not unique, quality, in that it comes pre-assembled and pre-filled ready for immediate installation. In an attempt to make the Aquagate as unintimidating as possible, Cooler Master boasts that installation is a simple, two step process. This is slightly deceptive, but more on that in a moment.


At the heart of the Aquagate Mini and the secret to its compact design, is the combined pump, reservoir and water block head unit. Though bulky in comparison to traditional water blocks, at 70 x 85 x 23 mm the dimensions are actually impressively small, for something that combines three major water cooling components in one unit. 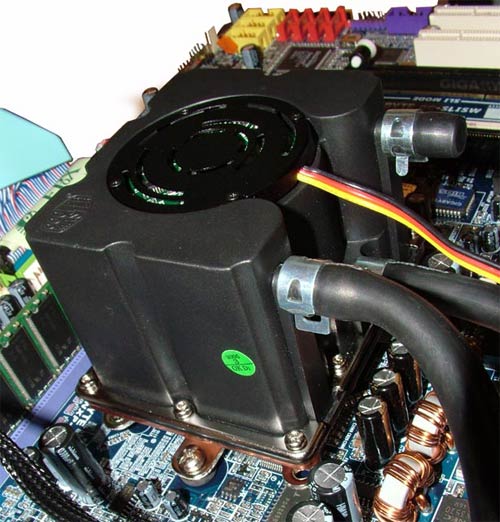 Details on pump throughput are hard to find, but what is known is that it uses Nano-millimeter Ceramic sleeve Bearings (NCB), a term Cooler Master appears to have invented but which I assume means that they’re made from, or either lined with, ceramic. It’s a myth that ball bearings last longer under normal temperatures, but the use of ceramics in sleeve bearings lowers friction and thus increases the life expectancy anyway, probably to beyond that of a steel ball bearing in actual fact.


The radiator is a good quality aluminium alloy unit, using a high surface area matrix. As it’s aluminium, it’s critical that a good corrosion inhibitor is used in the coolant water to stop it reacting with the copper in the water block and causing metal corrosion, or to use its more technical term, galvanic corrosion. As it’s pre-filled it means you only need to bear this in mind should you decide to try and perform your own topping up.

Cooler Master claims that “special opaque and heat-resistant elements in the pipe” drastically reduce evaporation and enables them to guarantee two years without the need for refilling.


There’s a certain element of faith involved in running the Aquagate Mini as its design allows for no visual confirmation that the pump is turning or that the coolant is flowing. The opaque pipes and enclosed head unit mean you never even get to glimpse the coolant let alone see it in action. There may be an element of “out of sight, out of mind” behind this design approach, but personally I like to know things are working at a basic level .


The radiator is cooled by a rather boring (at least by today’s LED festooned standards) 120mm fan, which pushes out an impressive 106.9 CFM at a flat-out 2,800RPM. If that’s a little too loud at 35.3dBA, then you’ll be pleased to know that you also get a variable rotary speed controller mounted on an expansion slot bracket with which you can rein the fan back to a minimum of 800RPM; in exchange for which you get a much more reasonable 21.3dBA of noise. 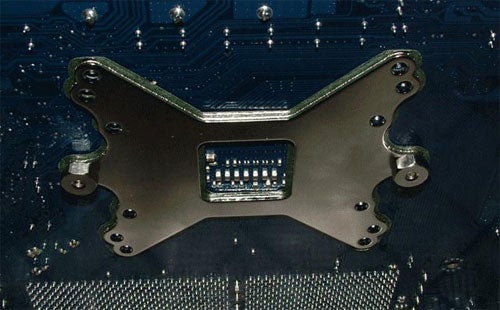 Installation alas, is where the carefully crafted illusion of simplicity and ease of use comes tumbling down. Selling a product on the merits of its user-friendliness, then dropping the bombshell that you’ll need to remove your motherboard in order to install the thing is a bit like buying ready-pasted wallpaper and discovering you have to draw your own designs on it.


That’s not a dig at Cooler Master specifically: it seems the majority of air and water cooler manufacturers offering products suitable for the latest crop of processors are not even attempting to utilise the existing mounting hardware, preferring instead to design solutions where a plate of some kind needs to be positioned behind the motherboard. There’s no doubting the effectiveness of such solutions, but there’s clearly a discrepancy between the type of user the product is designed to appeal to and the type of user with the experience needed to remove and replace a motherboard.


With the universal plate positioned behind the motherboard, you next choose the appropriate plate to pair it with and, using the four supplied screws, attach this to the copper base beneath the head unit, which incidentally was machined very flat and smooth, though not mirror smooth.

Finally the head unit and motherboard are fastened together. To do this, nuts need to be fitted from below the board meaning that you’ll need to remove it again to tighten them, should they work loose. A slotted socket suitable for use with a screwdriver is supplied, which is a thoughtful touch.


Positioning the radiator may or may not be a simple task depending on your case. The tube length isn’t great at 300mm and as a result case compatibility may be an issue. Also remember that the pre-assembled nature of the Aquagate Mini means the radiator has to be sited internally which again may limit suitable locations, or even suitable cases. 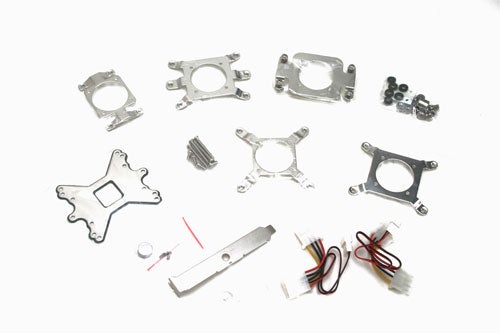 The fan speed controller needs assembling next. It’s optional, so you can just leave the fan running flat out and not use it if you’d prefer. The bracket is situated in an available expansion slot on the rear.


With everything in place, the final step is to connect the three-pin connectors, either directly to the motherboard or to the power supply through the supplied three-pin to four-pin Molex adaptor. The pump and fan each have their own individual connector and both most be powered. Bear in mind that the CPU and/or System Fan header on the motherboard may use smart (thermal) fan control, and this may artificially limit the speed of the Aquagate’s fan unless you disable it in the BIOS.


As you can see from the results on the next page, the Aquagate Mini performs reasonably well. Unfortunately, with cooling performance that’s merely on a par with that of a good quality air cooler offering near indentical noise levels, the fiddly installation takes away much of its appeal. 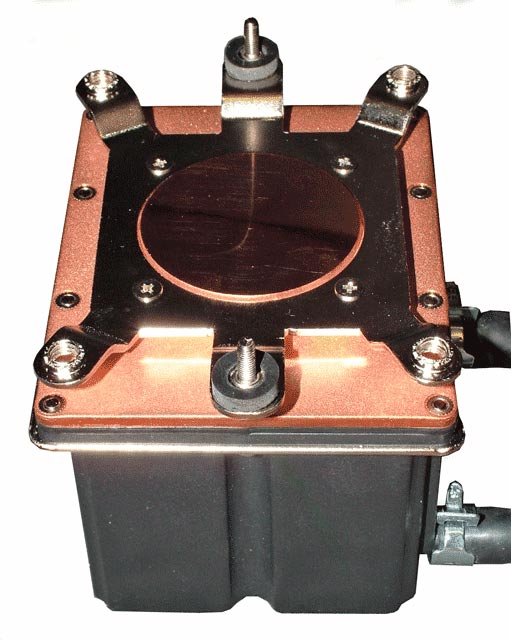 The so-so manual doesn’t do Cooler Master’s reputation any great favours either, with some vague information and less than impressive illustrations.


The Aquagate Mini ought to be the ultimate fool-proof entry into the world of water cooling. However, for a product aimed at the novice or less demanding user, the difficult installation, lack of flow meters or pump-failure alarms and the absence of any temperature monitoring is a real turn-off,


On balance, the Aquagate Mini is a decent alternative to air cooling so long as you don’t mind the installation woes. The low price might just ease some of those concerns but it still offers nothing that a good 120mm based air cooler can’t. 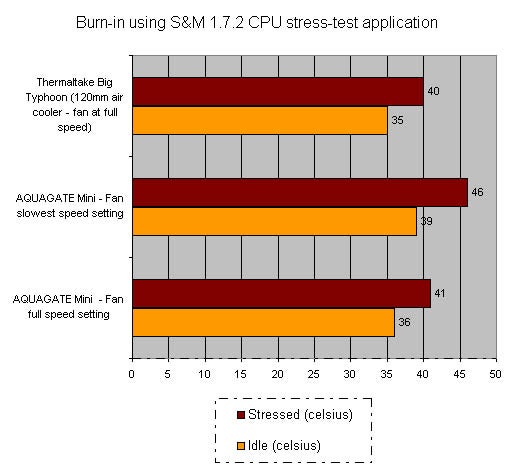