Having only attended one LAN Party, I guess the Ammo 533 case from Cooler Master isn’t really for me. However, for anyone that’s looking for a case that’s reasonably easy to transport, but can still take full size components, the Ammo 533 might be what they’re looking for. Made out of mild steel it’s quite sturdy and is more robust than aluminium. The chequerboard effect and the black and silver colour scheme is funky but it’s definitely a matter of taste. It doesn’t really work for me though. 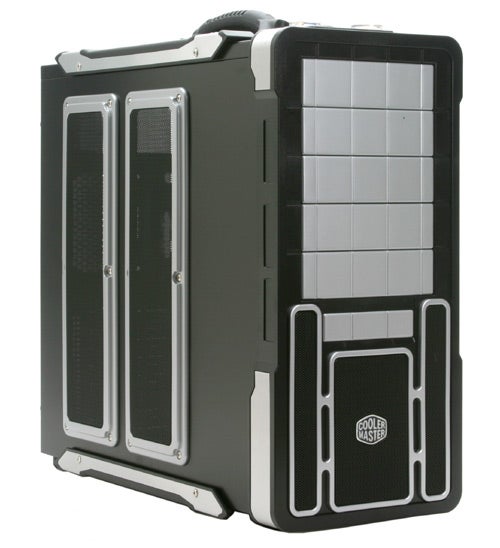 Cooler Master has riveted a heavy duty carry handle to the top of the case, which really helps if you want to carry your PC around with you. Rather than using the regular flimsy plastic feet that most cases have Cooler Master has fitted four rather oversized rubber feet. These could easily take a knock or two and will also help reduce any vibration from the case.


The left hand side of the case is vented by two large mesh grills, but there’s no option for adding a fan here. A plastic ledge runs alongside the bottom edges of the case. It doesn’t have any real function but does add to the overall look of the case. The bottom of the front fascia features three air ducts, with the largest one in the middle. All of them have dust filters but only the one in the middle can be taken out easily for cleaning purposes. 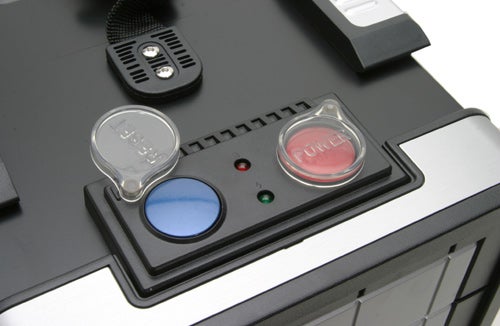 It’s quite easy to remove the front on the Ammo 533; just yank it forward and it comes off. There are no wires or cables attached to the front to worry about, which is rather unusual for a case. This is because the power and reset buttons as well as the power and hard drive LEDs are located at the top of the case. These buttons are large, and round and simply scream “press me”. For this reason they have plastic protective covers that swivel around to prevent the buttons so no one switches off your machine at the LAN party for a lark. One of the covers fell off the case though when I took the case out of the box, but it was easy to pop back on.


At the bottom right hand side of the case there are two USB 2.0 ports, a single six-pin FireWire port and a headphone and microphone socket. These audio ports can be used with motherboards featuring either AC97 or HD audio connectors due to the case having connectors for each. If neither of these works there’s even the option for connecting it up with separate wires. 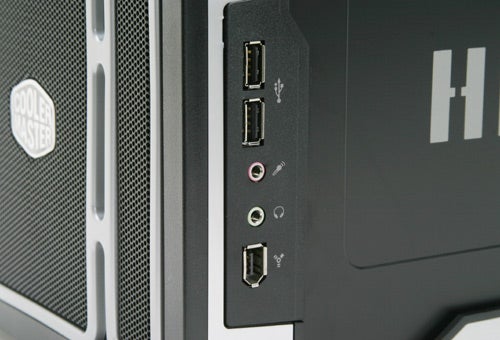 Internally, the Ammo 533 looks like many other cases these days – the tool free locking mechanism in the 5.25 and the 3.5in drive bays are used by several other case manufacturers. Rather oddly, Cooler Master decided to fit five 5.25in drive bays to the Ammo 533 but there are only three hard drive slots. However, only one of the two front mounted 3.5in slots is accessible from the front of the case, so the second one could be used for a fourth hard drive. Hard drives are slotted in with the help of plastic brackets that are clipped in to the sides of the drives and then pushed in place. 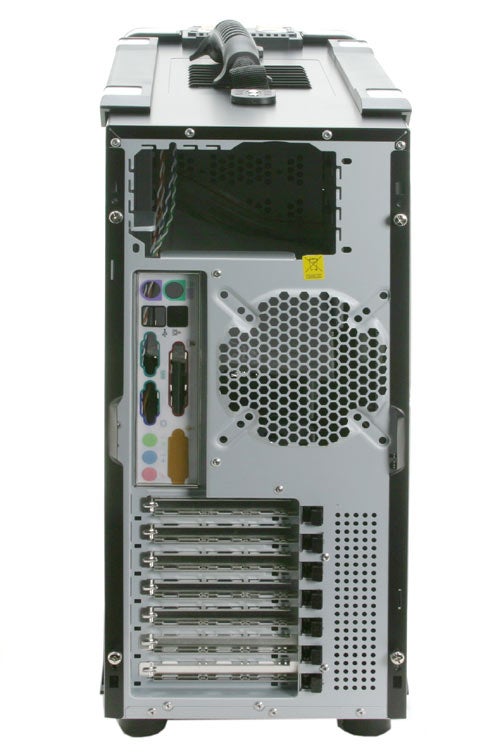 Cooler Master has pre-fitted a 120mm clear fan at the front of the case and this can either be attached to the motherboard or a Molex connector via the supplied adaptor. A rear case fan isn’t supplied but you can add your own as there are mounts for 80, 92 and 120mm fans. The top of the case has an extra air vent as well to let out hot air that has risen to the top of the case, although there is no option for fitting a fan here.


There isn’t oodles of space inside the case, but you shouldn’t have a problem fitting a standard size motherboard into it. To rest the motherboard on, the Ammo 533 utilises standard brass standoffs in favour for some fancier stuff seen on some aluminium cases.


Expansion cards are held in place with the help of small plastic clips that revolve around the outside of the case when opened. If you’re using a dual-slot card these kinds of clips can be a real pain, but the ones on the Ammo 533 can be easily removed. 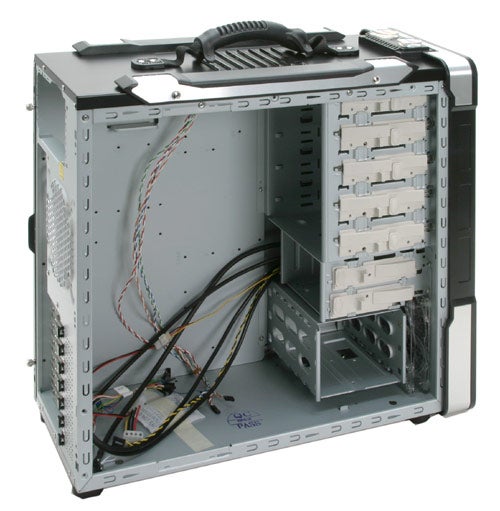 Overall, the Ammo 533 is a good mid-range case with distinctive looks that you’ll either love or hate. You also need to be sure that you don’t need to fit many hard drives, or if you’re happy to use 5.25 to 3.5in caddies or hard drive coolers. At £54.65, it’s fairly pricey for a steel case these days, but the build quality is better than average and it’s from a reputable brand.


The Cooler Master Ammo 533 might not be the ideal case for everyone, but if you attend LAN Parties, this case is worth considering.