For as long as free-to-play has been a force in mobile gaming, so many have mistakenly used the term ‘time management’ when trying to describe it. The energy system deployed within many F2P games, they argue, forces people to wait if they’re not willing to spend, meaning they have to ‘manage’ their ‘time’. It’s time management, right?

It’s a misunderstanding that explains the number of puzzled expressions I’ve generated when I’ve told people I’m something of a time management fan, and the countless hours I’ve spent delightfully informing people of the error of their ways.

Time-management games hand you a hundred million tasks to do and only a short amount of time to do them. Diner Dash, I often cite, was one of the first, and though the genre most definitely falls into the ‘casual’ category – much like many free-to-play releases – the two are very much not the same thing, I like to point out while chortling. 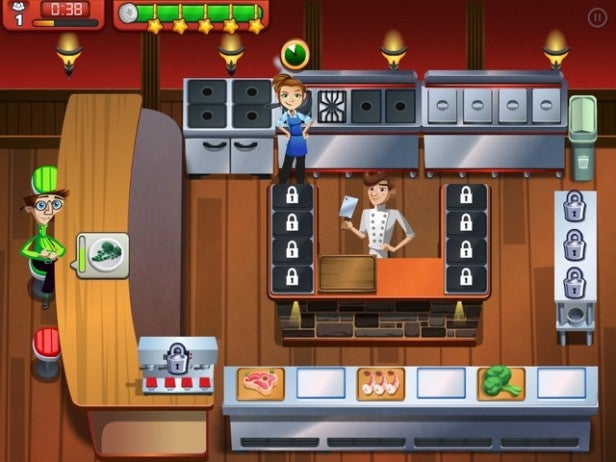 And then Cooking Dash 2016 comes along, and makes me look a bit silly. Just a little bit, though. Time management and free-to-play remain entirely different entities, of course – one is a genre, the other a monetisation method – but Glu’s decision to revive waitress Flo and her Dash IP comes with the move to make it a freemium release, which means that what we have here is a game that’s both time management and free-to-play at the same. It also means that, unless you’re willing to pay, you can also only take it on in short bursts.

Initially, the new payment model has very little impact on proceedings. Cooking Dash, like every Dash game before it, is a matter of performing multiple tasks in quick time. The basic setup here – and one that’s gradually expanded as you progress through the stages – is that you cook and serve various different dishes to order, with customers making their wishes known and handing you a certain amount of time in which to fill them. In practice, this means a whole lot of tapping, with Flo going exactly where you tell her in the order in which you tell her to. 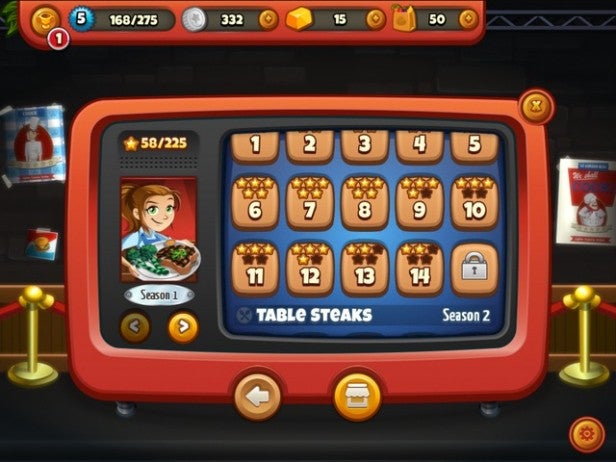 Someone wants a roast chicken? You better pick up a raw, plump bird with one tap, then, before dropping it off on the skewer with another tap, picking it up again once it’s cooked with a further tap, and finally delivering it plated up to the customer with one final tap. If that sounds like a lot of work, then try doing it for multiple customers at once, each one wanting something different to eat – some with sides, some with drinks, some with both – and with only a limited number of cookers, sous chefs and, ultimately, hands at your disposal.

This is all fairly standard stuff for a time-management game. Indeed, playing the first few levels of Cooking Dash 2016 – which sees you take charge of a number of different restaurants in a bid to win favour on some kind of reality TV show – is like taking a trip back to any of the time-management games that have hit mobile over the course of the last decade. But that’s not necessarily a bad thing. Where things start to grate a little, however, is with the realisation that it’s impossible to achieve full marks in most of the levels without making the right upgrades.

Some of these you can do simply from credit you win from successful levels. Everything from the quality of the food you’re cooking to the décor of the restaurant and the proficiency of your utensils can be improved, each having an impact on the happiness and satisfaction of the customers and how much they tip. What isn’t made clear, however, is that getting five stars in a level where the customers primarily want one particular dish requires you to have upgraded those ingredients before you started. If you happen to have drained your credit on some other upgrade, then even blitzing a level won’t earn you top marks unless you’re willing to part with some real cash in order to make that upgrade now, or come back to it at a later stage when you’ve upgraded through your winnings. 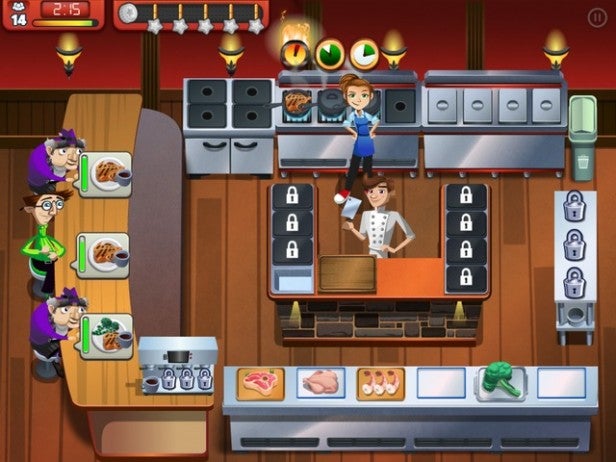 For those who like to pick up a perfect score before they move on, it’s an especially annoying setup, and one the game itself doesn’t even make clear. It’s entirely possible to replay levels over and over, believing you’ve made a mistake when, in reality, you simply need to upgrade your broccoli.

Putting such grumbles aside, what you’re left with is a proficient, if not especially bold re-imagining of Flo and her Dash franchise. Anyone who has a handle on time management will feel immediately at home here, though it feels like much of the effort to bring Cooking Dash into the modern era has been spent refitting it for free-to-play, rather than updating the gameplay in any meaningful way. A recipe that could have done with a few new ingredients, then, to deliver a fresh dish.

Though it pulls all the best elements from time-management games of old, Cooking Dash 2016’s only real innovation is to mould its gameplay around free-to-play, which – though seamless on the whole – offers no great strides forward, and ultimately means this is a proficient but unspectacular rehash of some of the genre’s classics.