The perennial elegance of Apple products – iPods, iPhones, iPads, etc – has inspired an enormous spin-off industry in designer iThing ‘accessories’. For instance, even the most serious of electronics brands has gone all ‘fancy’ to bring us all manner of weird and mostly wonderful iThing speaker docks. And now we find perched on our desk a new iPod/iPhone speaker dock from no less aesthetically renowned a source than the design studio of Sir Terence Conran.

Cunningly called the Conran Audio Speaker Dock, it certainly looks unlike any other iThing dock before it. For starters, a steeply angled top half contains a recessed circle in the middle into which you slot your iThing, while the grilled bottom half contains 2 x 15W speakers, with a pleasingly smooth, heavy-duty finish taking up most of the sides and rear. The right side as you look at it sports a large, stylishly illuminated volume dial, while the left side thoughtfully has a place for slotting in the dinky and attractively minimalist remote control when you’re not using it. 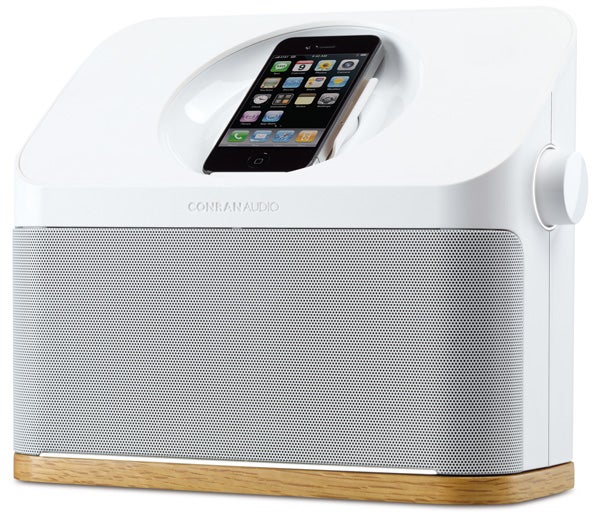 The bodywork and remote can be bought in either black or white finishes, with the white version having a tasteful wood-finished base and the black version a grey one.

Another cool touch is a slim LED strip light running for most of the dock’s width just above the wood/grey base. This isn’t just decorative either; it’s also used to help you switch between the dock’s six built-in EQ modes: Normal, Jazz, Pop, Rock, Classical, and Acoustic. You hold down a couple of buttons on the remote simultaneously and the strip goes into ‘spot’ mode, illuminating in sections that each correspond with one of the EQ modes. 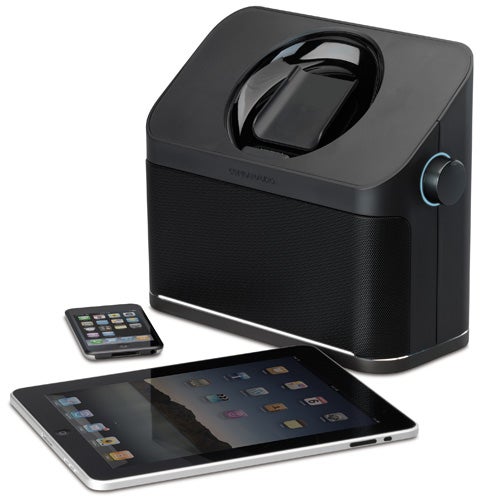 The obvious desire to keep the Conran Audio Speaker Dock looking as minimal as possible (as in, no LED readout) has also led to functionality doubling up on the volume knob. For you also use it (by pressing it) to select which of the dock’s three audio source options you want to use, with the knob’s illumination changing colour to show which source you have selected. The three sources available are the iPod/iPhone/iPod touch dock, a provided line input, and Bluetooth.

Obviously, it’s impossible to ignore the fact that this Bluetooth functionality has had some of the gloss taken off it by the arrival of Apple’s more sophisticated AirPlay system. And some people will also be put off by the lack of Wi-Fi and any sort of built-in radio tuner. But personally we found the Conran Audio Speaker Dock’s provisions sufficient to cater for our needs. After all, it’s clearly designed – especially with its surprisingly affordable £249 price tag – to offer a simple and casual extension of your Apple computer or iThing audio functionality into a normal living space, rather than becoming some replacement for a dedicated, high spec multimedia streaming or hi-fi system. 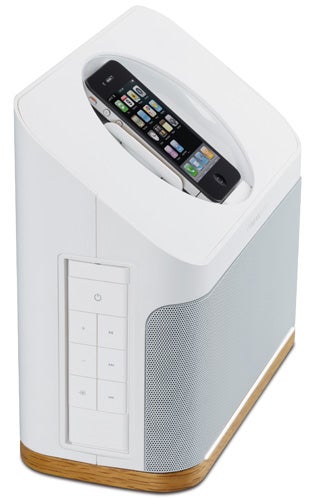 For the record, connecting the Conran Speaker Dock to our resident Apple iMac and MacBook Pro was completely effortless. The devices paired together in seconds and we suffered no signal loss or distortion issues during our tests.

Before getting into how the Conran Audio Speaker Dock sounds, there are still a couple more things about its design we should mention – one cool, the other less so. The cool bit is the way you can turn your iThing around in the recessed circular dock compartment, so it can rest horizontally or vertically, to suit your tastes/practical preferences. The less elegant bit concerns the plasticky inserts you have to slot into the centre of the dock ‘circle’ to adapt it to your particular iDevice. For instance, our test sample had an iPod touch ‘holder’ slotted in, with iPhone 4 and iPhone alternatives included in the packaging. It’s handy that these inserts are all clearly labelled with the device they’re designed to hold, but as stated earlier, they feel a bit cheap and cheerful by the standards of the rest of unit’s design. 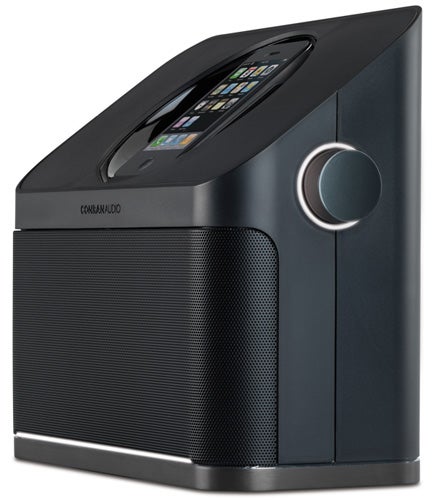 To be honest, initially we didn’t really expect a great deal from the Conran Audio Speaker Dock’s sound quality. Given the £249 price, we just thought you’d be paying mostly for the design, with the sound being an afterthought. But then, as we were doing a last check through the unit’s specs before switching it on, we clocked that the Dock had actually been built by innovative and well-respected loudspeaker company Q Acoustics.

And lo and behold, Q’s talent for getting startlingly good sound from very compact speaker enclosures is writ large all over the Conran Audio Speaker Dock’s performance.

The audio’s appeal comes from two main areas. First, there’s its raw power. We hadn’t anticipated being able to get much ‘realistic’ volume out of the Dock, but in fact we were able to keep cranking it up and cranking it up until frankly our ears were giving way before the Dock’s speakers did.

Distortion levels increased a little at the sort of volume you’d need to fill a very large kitchen or conservatory for a noisy party, but not to a truly serious degree.

The other striking thing about the Conran Audio Speaker Dock’s sound is how clear it is. There’s a level of detail to proceedings that adds layers to the sound and really brings your music to life in a way you might not have thought possible given that you’ll likely be playing heavily compressed audio from iTunes. 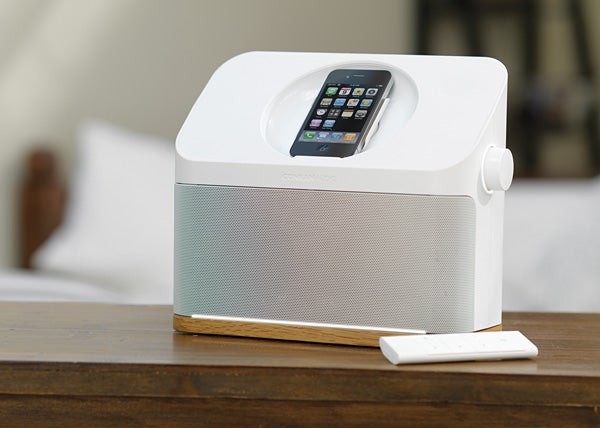 The clarity doesn’t mean, though, that there’s anything over-clinical about the Dock’s sound; in fact it enjoys a quite warm tone, especially at low to mid volume levels, that lends itself particularly well to classical music.

Don’t take this to mean that the Conran Speaker Audio Dock’s pretty little body can’t get dirty when you want it to, though. The different EQ modes appear to have been specifically tuned to the Dock’s audio properties rather than just ported in there from some other device, meaning that the Rock and Pop modes, in particular, really add bite/bounce respectively to their target music types.

Helping create the sense of detail mentioned earlier is the surprising amount of dynamic range the speakers can achieve, with reasonably potent bass lines resting comfortably and cohesively with the treble register – and without overwhelming any mid-range vocals.

We should make it clear here that the Conran Audio Dock doesn’t deliver the same sort of audio dynamism as the real sound quality stars of the iPod dock firmament, such as B&W’s Zeppelins, Arcam’s rCube, and the B&O BeoSound 8. Plus it also sounds a touch ‘mono’ with its sound stage, failing to deliver the sense of stereo width that the best docks manage.

But so far as we’re concerned this is all very forgivable in the context of the Conran Audio Speaker Dock’s £249 price, especially when you consider what an iconic design you’re getting for so little money.

Had the Conran Audio Speaker Dock been pitched at the £400-£500 price level where designer docks usually tend to hang out, we’d probably have felt it was a likeable enough effort but too short of features and that nth degree of audio quality to be really easy to recommend.

At £249, though, for any Apple fan after a chic, simple and surprisingly easy on the ear way of breaking out the music stored on their iDevices, the Conran Audio Speaker Dock is definitely worth considering.