Imagine a world of sheer, relentless terror. A world in which savage, dishevelled lunatics wander around dilapidated buildings, always ready to attack, while you trudge fearfully in pursuit of goals that you can barely comprehend. A world in which just poking your head around the wrong corner of a department store can bring rage and bloodshed down upon your innocent head. A world in which there are no safe places, and nowhere to hide. 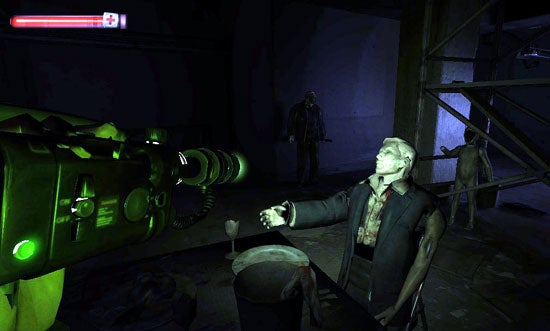 But enough about the joys of the post-Christmas sales in Coventry. We’re here to talk about Condemned: Criminal Origins, Monolith’s Xbox 360 launch exclusive and one of the most distinctive titles I’ve come across this year. Of course, it does have a lot in common with the above description, but that doesn’t begin to do Condemned’s world justice. Not since SWAT 4 has a game done urban squalor this well. Where Rare, for instance, used the 360’s power to create the super-shiny surfaces of a future techno wonderland, or the Oz-like scenery of a fantasy world, Monolith has used it to create environments that practically reek of rising damp, pooling vomit, rotting trash and leaking excrement. 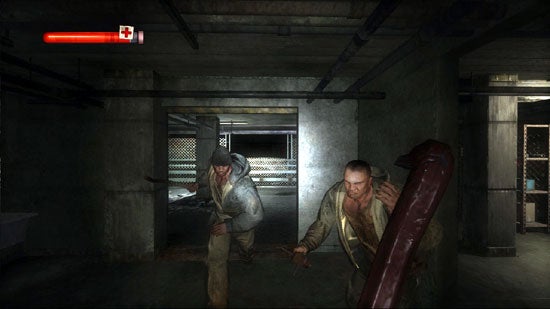 The look isn’t totally original – all that grim dead city chic is straight from David Fincher’s Seven or Fight Club, and all the psychic weirdness and FBI style is borrowed from The X-Files – but it makes for a refreshing change from the usual. In gaming terms, Condemned resembles a first-person Silent Hill, except with a truckload more detail. No matter how repellent the visual content gets, you can’t deny that the lighting, modelling and texturing is beautiful. On a high-definition screen, Condemned is top notch stuff. 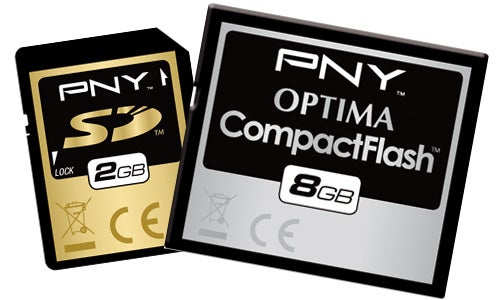 It’s also a game that starts off looking like an FPS, but soon transforms into something much more interesting. Early cues come in the form of FBI gadgetry, used to scan the opening murder scene and send clues back to Rosa, your friend in the lab, for analysis, but the game only reveals its true character when the gun is literally ripped from your hand. Condemned is actually a survival horror game, and a shockingly brutal one at that. If TrustedReviews were a crude and unpleasant place, we might describe it as a First-Person S***ter, because it’s definitely a brown trousers sort of game. 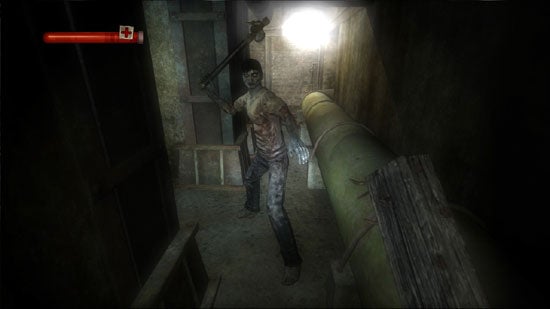 After the initial set-up – mysterious bird plague, violent vagrants, weird serial killers, you framed for murder – the game settles into a fairly steady pattern. You wander through a variety of creepy, deeply unpleasant locations, using your various scanning and imaging gadgets to uncover clues, while under frequent assault by assorted tramps, thugs, winos, nuts dressed like shop store dummies and depraved underground mutants. All these charming fellows come tooled up with planks (accessorised with nails or bolts according to whim or custom), pipes, sledgehammers, fire axes and – if you’re really unlucky – guns. You, in the meantime, are armed with whatever you can wrench from the scenery or grab from their hands. This puts the emphasis heavily on melee combat, for which the game uses a simple but effective system of triggers for whacking and blocking, plus some nifty counters and useful kicks. If you’re really stuck, you can even use a taser to buy some time – essential when taking a 2×4 with nails in to a guy packing a loaded .45. 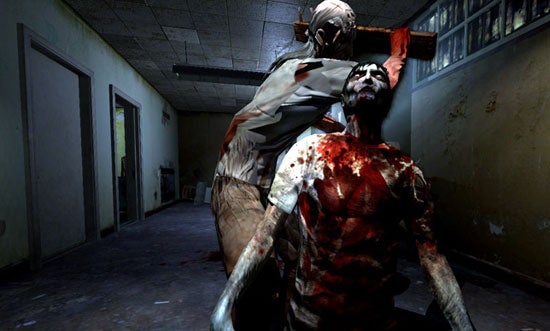 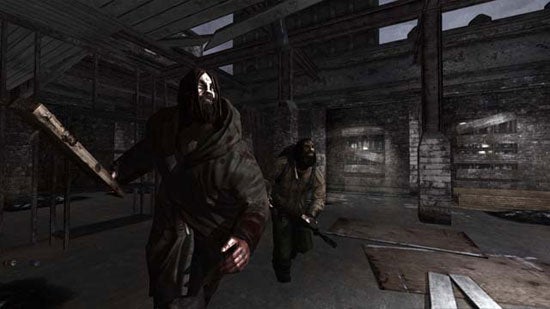 Now, this combat is actually surprisingly violent – in fact, it can be on the edge of stomach churning – but the close-up and personal approach certainly makes for a scarier game. And this is where Condemned really scores: atmosphere. Like Silent Hill, it manages that trick of making the banal really creepy, with superb locations – abandoned buildings, closed metro stations, collapsing department stores, city libraries – made hostile through great, moody lighting and those ever-present touches of decay. When the game sucks you in, it’s a genuinely nerve-wrecking experience, with you trudging through the department store, playing your torch across the surfaces, straining for every sound or sight of movement. The ambient music and spot sound effects are constantly unsettling, and while your attackers aren’t fiendishly intelligent, they all have their individual strategies and ways to catch you off guard. This isn’t a game of simple Doom 3 shock moments, but one of mounting dread and moments of uncontrolled panic. When it works, it’s a ruthless fear machine. 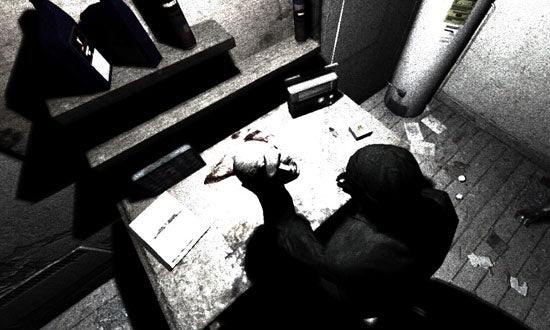 The only problem is that it doesn’t always work. No matter how good the atmosphere, it can’t hide the fact that the game underneath is frequently simplistic or just plain nonsensical. The biggest let down is the detection side of things. All that gadgetry might impress the CSI-buffs, but you’re stupidly limited in where you can use it and what you can do. It’s not that we want realistic forensic investigations – who wants to cover every metre of every room? It’s just that Condemned leads you too much by the nose. Use the laser here. Scan this. Photograph that. Do what you’re bloody well told. You’re not even left to guess at plot developments or build up theories to explain them. Instead, you’re force-fed everything by your less than glamorous assistant, Rosa. Where Monolith could have put more emphasis on creative puzzle-solving or ingenious detection, it has instead created a game that’s mostly about battering tramps around the head with pipework. It’s scary and those psychotic tramps deserve it, but you can’t help thinking that the foundations were laid for something better. 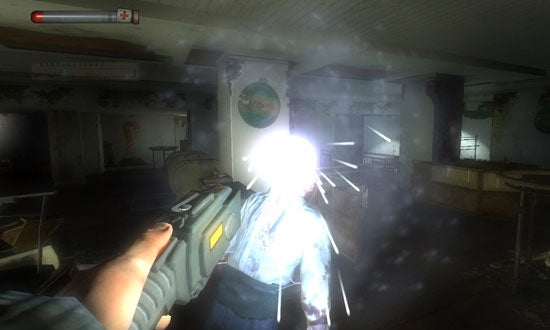 What’s more, there’s some really silly find-key-to-open-door stuff here. Why can you only open a door with a fire-axe when it’s surrounded by a collapsing stud partition and you have a sledgehammer? Why do fallen shelving units pose such an impenetrable barrier? Even the plot has its dodgy moments. The whole frame-up premise seems woefully thin, and subsequent developments don’t always inspire credulity.


And one final moan: lasting value. Your forty quid is only going to net you around ten hours of gameplay, and while there are Capcom-style collectibles (dead birds and metal pieces) you would have to be a peculiarly committed person to trudge around the whole game looking for them. In other words, Condemned practically screams “rent me” rather than “buy me.” 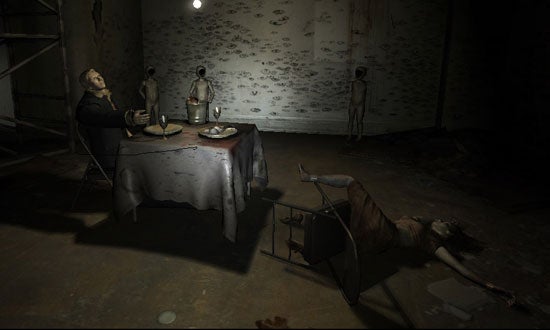 In which case you really should listen, trot down to your local Blockbuster and grab the game, just because the whole experience is so grim, so disturbing and – above all else – so different that, if you are lucky enough to have an Xbox 360, you need to give it a whirl. In some senses, Maybe Condemned is a missed opportunity, but at least Monolith took steps to create something unique. In a perfect world, this would be the pilot episode and we’d now be looking forward to new, less-expensive, downloadable instalments. In our world, however, this is a great game to borrow, not to own.


A fiendishly creepy experience, but only a partially satisfying game. You ought to play it, but £40 is a lot for the privilege.