When I first saw Condemned, just a few months before the Xbox 360 launched, I had it down as the hidden gem of Microsoft’s launch line-up. Where so many other early next-generation games seemed to be doing the same old stuff but with shiny new HD graphics, Condemned promised an interesting mix of gritty, story-driven FPS with survival horror and the trappings of a CSI-style police procedural. Unfortunately, the finished product didn’t quite live up to my hopes. While Condemned had sections where the tangibly creepy atmosphere and the forensic investigations all came together with a bang, it transformed all too soon into a constant grind of what you might call tramp battering, with crazed vagrant after crazed vagrant wandering towards you to be battered with your waiting 2×4 (nails optional). Even surrounded by a fine plot and some great shock moments, actually playing the game was a bit of a chore. 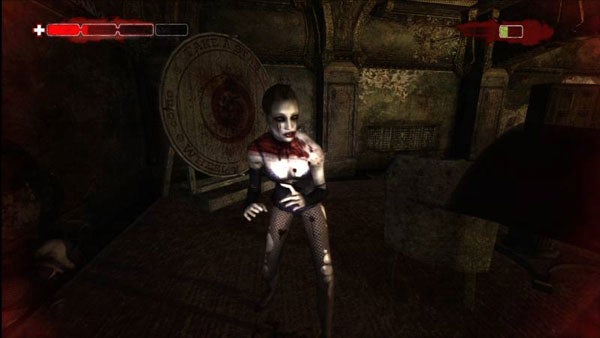 Perhaps that’s why I didn’t have such high hopes for Condemned 2: Bloodshot, particularly the more I heard about how the team had put a lot of work into a new, more elaborate melee combat system. Sure enough, Condemned 2 is even heavier on the tramp battering than its predecessor, though at least this time the tramps have been replaced by deranged, leather-clad gang members, emaciated junkies and assorted hoodies. One up for the homeless community, one down for the ASBO wielding youth. What’s more, the actual bashing business is a bit more interesting, with a decent system of jabs, blocks and combos put together through combinations of the shoulder/trigger buttons. It’s one of the best implementations of first-person close combat since Chronicles of Riddick: Escape from Butcher Bay, though that’s not actually saying all that much. 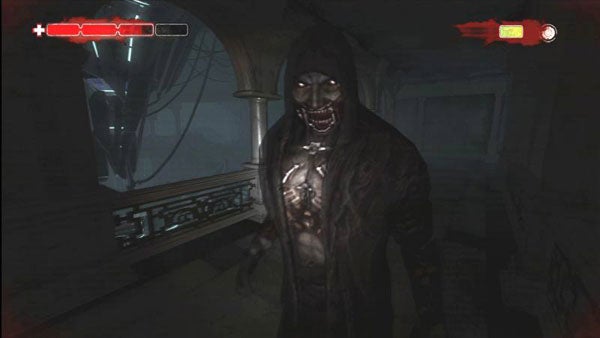 In fact, my hopes rose as it emerged that Condemned 2 wasn’t just the dumb batter-em-up I’d feared. It helps, of course, that the visuals are still a strong suit. Condemned 2 does a great line in David Fincher-esque urban decay. You want filthy, cracked tiles, rotting woodwork, plentiful filth, scrawled, mouldy concrete and the sort of atmosphere you can practically smell? Well, you don’t need to watch Gordon Ramsay’s Kitchen Nightmares – Condemned 2 does them all as well. Character modelling is generally excellent, and the lighting is absolutely top notch. In fact, if Konami ever wants to put Silent Hill in a first-person format, then Monolith has given them a pretty good template to follow.

None of this surprised me. What did was the game’s opening, with Condemned’s hero, Ethan Thomas, now a deranged, mangy alcoholic living rough on the streets until caught up in a cycle of escalating urban violence, seemingly exacerbated by the appearance of strange sonic devices around town. The initial sequences have a bizarre nightmare logic to them, as realistic settings give way to a dark fantasy world of thick black ooze and strange liquid creatures, leaving you wondering whether the events are actually happening or just a figment of Thomas’ diseased imagination. Play it alone, late at night, with the lights turned off and headphones on (as I did) and Condemned 2 really can be powerful stuff. 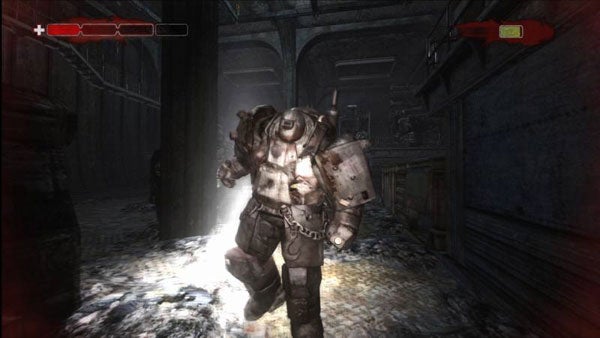 But it’s not long before the problems that dragged down the original game reappear. Basically, there’s a lot of combat to wade through, and arguably too much for comfort. You’ll work your way through foe after foe, desperately pushing for the next checkpoint, occasionally being battered down by particular hard nuts or just sheer numbers. It seems like ages before the game throws in its first forensic investigation, and even this is almost embarrassingly paint-by-numbers, as if Monolith no longer trusts the knuckle-dragging audience that embraced Condemned’s tramp-battering to put together any clues on their own. The game still has effective moments of creeping tension or seconds of brilliant shock value, but by the time you’ve reached the end of an escape from a crumbling hotel, Condemned 2 feels like its settling in for a long, repetitive grind. 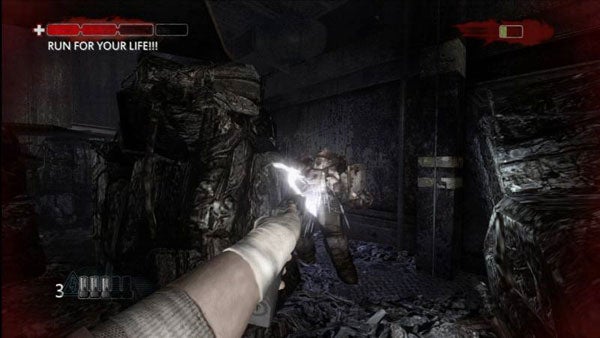 And the more it goes on, the more you’re struck by the game’s absurdities. Why do Thomas’ old police chums trust an unwashed, broken, delusional alcoholic with vital missions, let alone a riot gun? Why is it so much work to navigate the various labyrinthine settings? When held feet away from your objective by some ridiculous barrier, why can’t you just barge that hotel trolley aside or enlarge the hole in the dilapidated wall with your current blunt instrument. The answer is, of course, that this would frustrate the game’s spectacularly linear level design – but that’s not an answer that we’re so happy to hear in this day and age.

On top of this, the atmosphere rarely hits the heights it did in the first game. A trip through a burning doll’s factory has its moments – particularly once the establishment’s nasty little denizens come crawling their way towards you – but is it a match for the mannequin-haunted department store of the original? Not on your Nelly. An exploration of a mysteriously deserted agency building also has its share of chills, with the game throwing in every blurred-vision, creepy static, weird stuff going on at the edge of view trick you’ve ever seen in a Japanese horror film. But then the effect of this is spoilt by a shockingly ham-fisted stretch of more conventional FPS gunplay. For every genuinely engaging puzzle or nice bit of criminal investigation, there’s a dumb boss battle, a tiresome gang brawl or a bit where you just can’t work out where you’re meant to be going or what you’re meant to be doing – partly because the game can be absurdly sensitive about where you have to stand to invoke a particular action (you can only crawl under or climb over objects at particular scripted points). 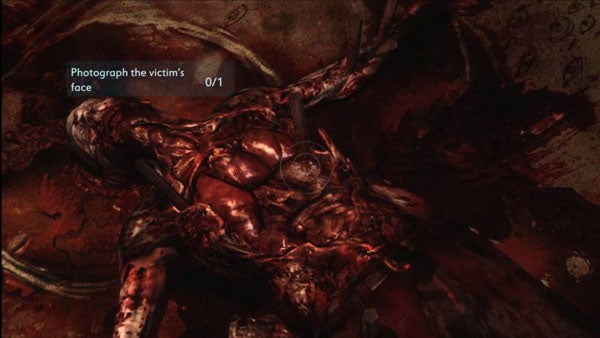 Does this stop Condemned 2 being a hugely potent nightmare experience from time to time? No, but like a lot of nightmares it doesn’t really hold up to close scrutiny. More seriously, you have to wonder after a while what the pleasure is in playing the game. Condemned 2 is so dark, so gruesome, so relentlessly violent, remorseless and lacking in any discernible humanity that it’s actually a pretty unpleasant experience for much of its running time. I won’t go all moral about it and say ‘ban this sick filth’. Tastes differ and if you enjoy bludgeoning hundreds of people to death in a variety of brutal ways then this may be the best title you’ll play all year. All the same, I can’t say it’s a game that leaves me feeling good. Maybe that’s the point, but if so then I’m not sure that the game has any other effects to compensate. Great works of horror can be exciting or cathartic. They can confront human fears or obsessions in really powerful and interesting ways. Unless you’re really, really concerned about urban breakdown and the hoodie menace, I’m not sure that any of the above can be said about Condemned 2. 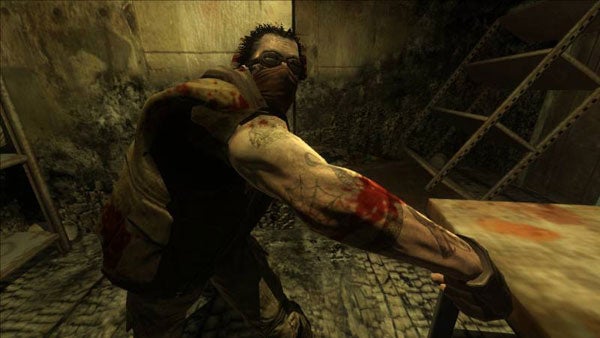 It’s frustrating, because Condemned 2 is not a shoddy effort by any means. It even packs in an online mode this time, though I suspect the emphasis on melee combat means that it won’t be a keeper long term. Let’s not be too downbeat. In two games, Monolith has started to build a world and a mythos that – pushed in the right direction – could be a Western rival to Resident Evil, Silent Hill or Project Zero. What’s more, the team is getting elements like the melee combat system, the atmosphere, the visual style and the forensic stuff absolutely spot-on right. If it could just get the rest to fall into place, then a Condemned 3 could really be a stunner. Condemned 2, however, is another case of close, but no cigar.