I don’t know where you’re planning to go on holiday this year, but I wouldn’t make it the Exiled Lands. The setting of Conan Exiles is a brutal and unforgiving place, where the deserts teem with hideous creeping, crawling, biting monsters – and the jungles are the much the same, only the bastards here swim as well. Some of your fellow holidaymakers might be friendly, but many are mindless psychopaths who will kill you soon as look as you, either because they don’t like your face or because they think you’d make a decent snack. If the psychos and varmints don’t get you, hunger, thirst and vicious sandstorms might. Basically, your chances of living out the day are practically zero.

Of course, most visitors to the Exiled Lands don’t get there voluntarily. They’re nailed up to a cross in the desert for crimes they may or may not have committed until released by a grim-faced Conan, making what I assume to be his only rubber-faced, badly-voiced appearance in the game. From there, we’re on to the stuff of the classic survival sim; negotiate the wilderness, find materials, craft tools, harvest more materials, build weapons, smack everything that moves, build a home. You know the basic drill.

That said, Conan Exiles has a few more strings to its hand-crafted, primitive bow. Ancient terrors and dark sorcery haunt these lands in the ruins and jungles, with the promise of adventure everywhere you look. A simple hut can be developed into grand fortifications, ready to resist the periodic purges – armies that attack the largest bases. As you gain experience you’ll grow more powerful, but also unlock new crafting recipes for iron weapons, stronger armour, nicer (if barbaric) interior décor. And then there’s also religion to contend with, conferring perks and abilities on players but only if they build stuff for and suck up to their patron gods. 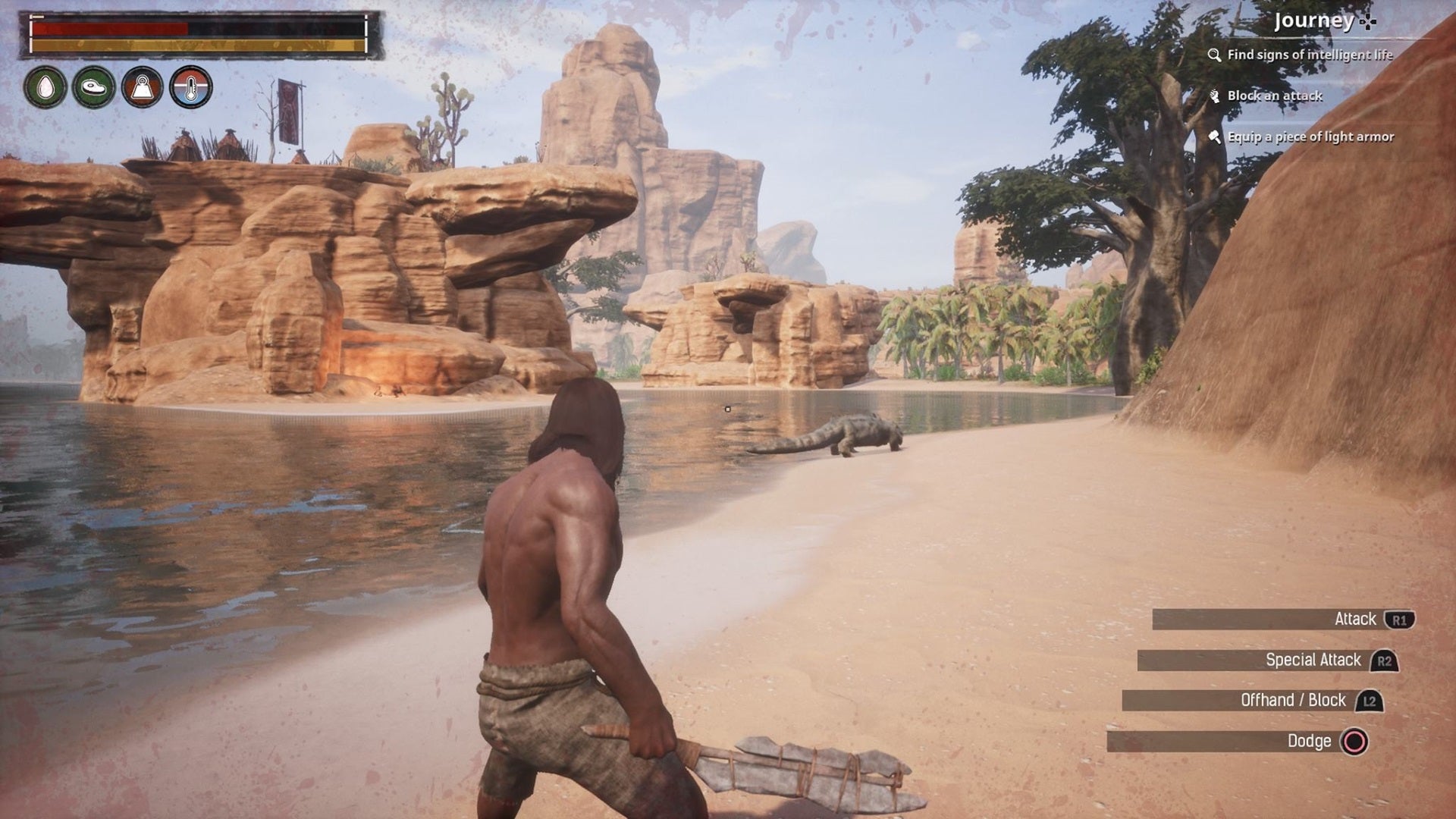 You can walk the Exiled Lands on your own single-player or co-op server or connect to a public server for PvE and PvP action with up to 39 other players. The latter’s great if you like stress, constant conflict and the opportunity to lose everything you’re carrying because some double-hard bastard decides to mug you while you’re recovering from a crocodile attack. The former’s better, just because a) your fellow exiles can’t attack you and b) some might even help you out with that frickin’ crocodile. There are potential downers if you can’t find or connect to the public server you previously connected to, particularly if its full, but playing solo is a slightly lonely experience, where nearly every other human soul you meet is unnecessarily hostile. Each option is, in a way, it’s own experience, so it’s worth trying all to work out which is for you.

Whichever way you play, you’re going to need to put in a lot of groundwork before you get to a life of high adventure. Stone tools and weapons will only get you so far, and you’ll need the blacksmith and armoury workbenches up and running before you’re kitted out to handle anything tough. That means collecting an awful lot of rock and wood, plus various other materials, either added raw or themselves crafted into primitive components. Basically, for the first eight hours or so of play, smashing rocks and trees is very much your thing.

And even once you’ve built your basic crafting facilities, you’ll need a lot of other raw materials to work with, ranging from animal hides (which come fairly thick and fast thanks to the sheer volume of murderous beasts lurking around) to ores and plant extracts. Simply crafting a piece of light armour takes a mountain of stuff to gather and sort out. Don’t even get me started on the amount of gear you’ll have to collect and assemble before you have your first iron sword.

To help you on your way, Conan Exiles gives you a constantly updating to-do list of objectives, starting with trying out your basic climbing or kicking skills, then moving through simple combat skills, crafting tasks and exploration activities. These help you keep moving in the right direction and give you more to do than simply eat, drink, build. 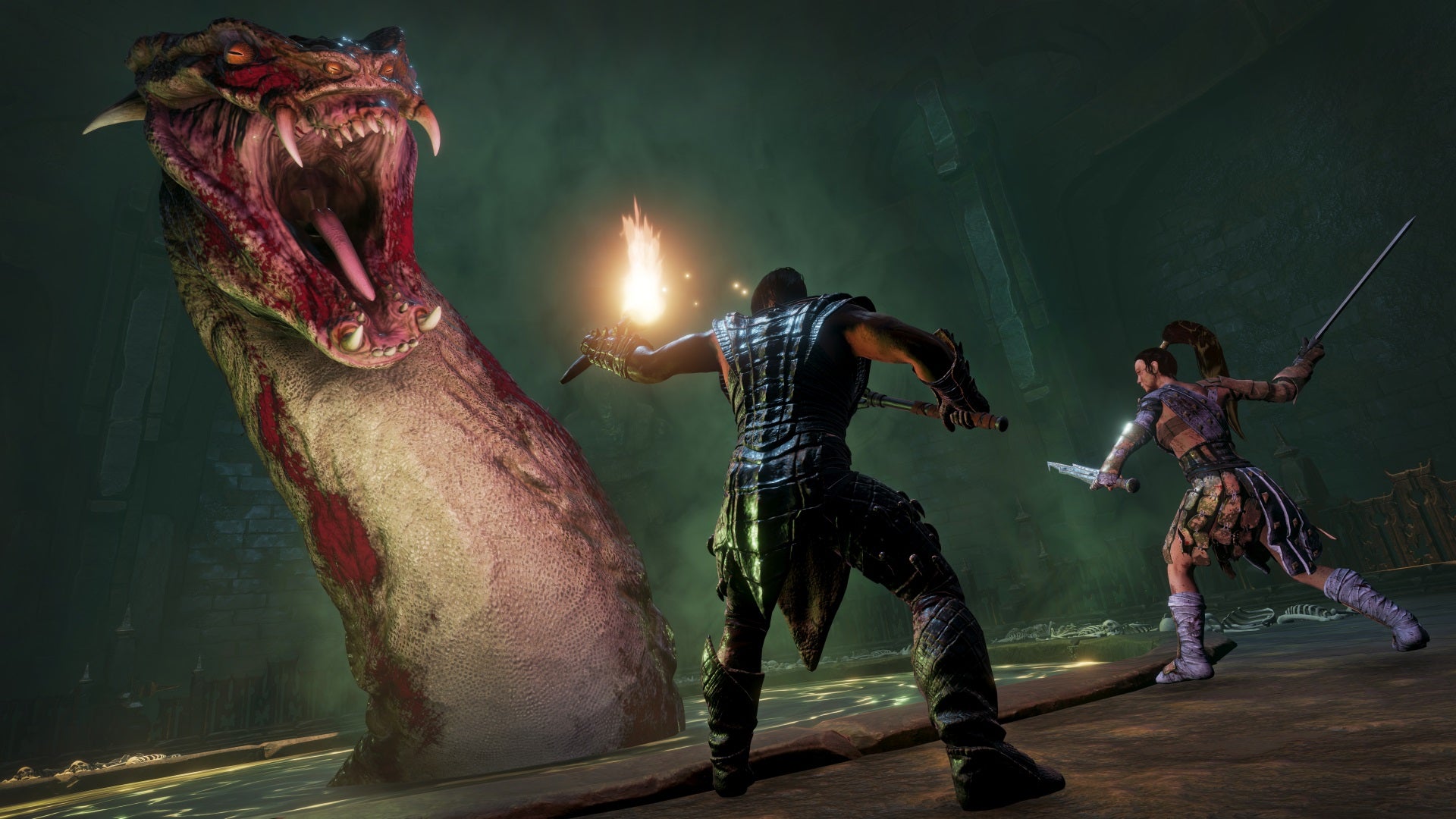 Unfortunately, the game isn’t nearly so helpful when it comes to tutorials or advice. That’s not so great when you’re trying to work out where your newly crafted hatchet has disappeared to, let alone how to move items from the main inventory to the quick access dial and back again, how to build your first hut or even how to turn a slaughtered croc into a nice pile of resources. What’s more, Conan Exiles seems to make hard work of relatively simple tasks. It’s not such a problem if you’ve cut your teeth on ornery survival sims like ARK or Rust, but if you’re more used to Monster Hunter or Legend of Zelda: Breath of the Wild, Conan Exiles’ interface feels needlessly baroque.

This is just one wrinkle that you’d think could have been ironed out over the game’s lengthy Early Access gestation. You can see that the devs have added a lot of content and re-engineered the combat system into something that’s roughly enjoyable in a Dark Souls-lite way. New areas, like the flooded jungles and mountainous regions make the world much more interesting place, and the savage but beautiful environments and mysterious ruins convey the atmosphere of Robert E. Howard’s pulp fantasy fiction to a tee.

Yet Conan Exiles is still weirdly glitchy. Think critters floating around in mid-air or savage warriors walking on an invisible treadmill because they’re stuck behind a rock. Think nasty, laggy skirmishes where there’s a half-second gap between you swinging and the sound of a blow being struck. Think tools that don’t seem to work on the object they’re meant to work on until, all of a sudden, they do.

It can also be frustrating. I’m a middle-aged guy and careful about my blood pressure, so I don’t play on servers where death is permanent or other players can nick my stuff. Sadly, I’d still get slaughtered by beasts or random pirate bands, then be unable to find my corpse and reclaim my stuff, even though I’m wandering around the area where the death marker sits on the map. When you lose a lot of hard-earned, hard-crafted loot, this isn’t much fun. Ditto for getting attacked by a leopard when respawning on a bedroll in the North of the map, dying again and finding that your bedroll has now gone, leaving you respawning in the desert where you started, miles from your corpse, your gear and all your crafting facilities. 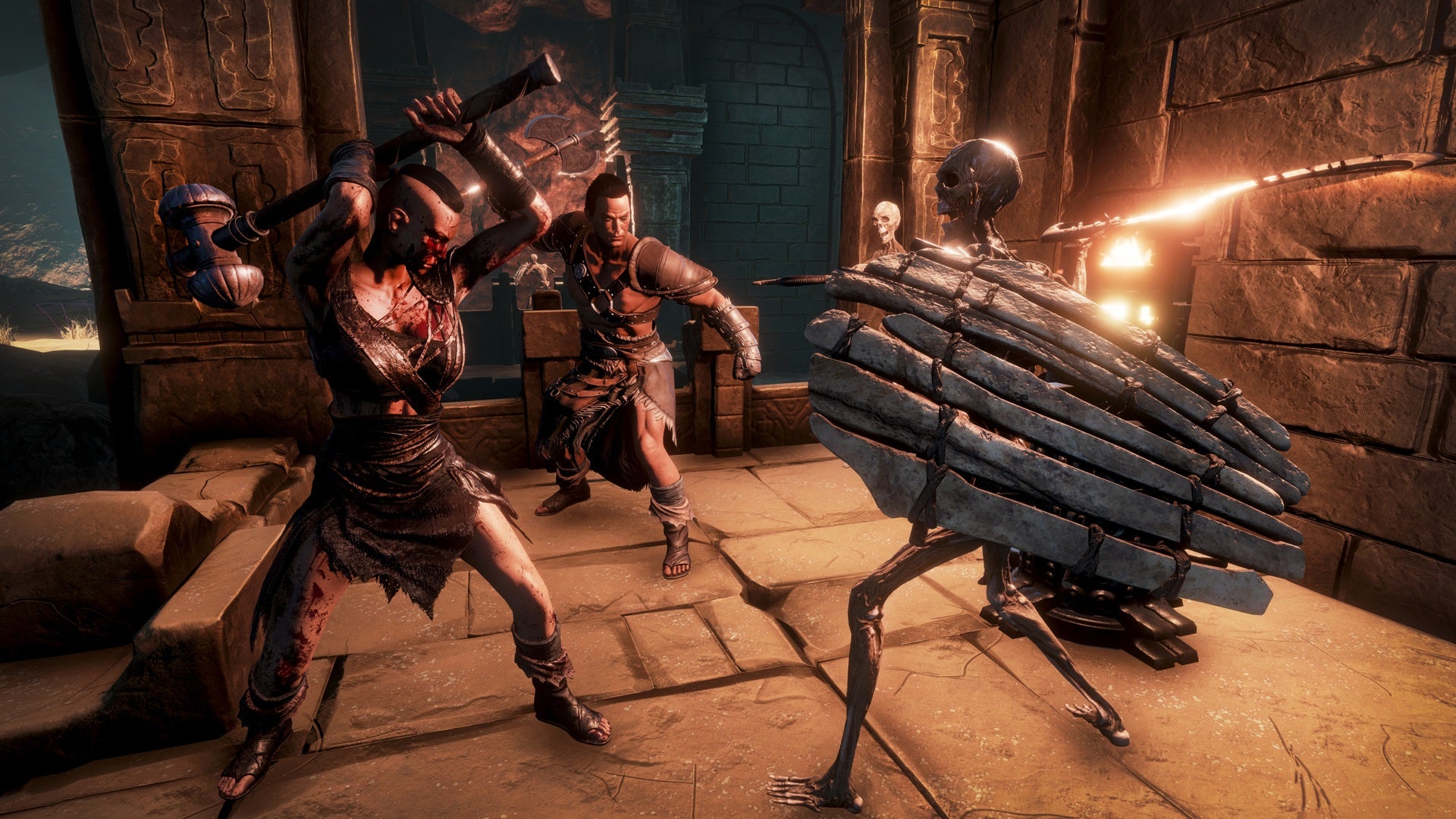 That’s a shame, because Conan Exiles seems to be transcending a difficult start and becoming a surprisingly compulsive heroic fantasy survival sim. Its gameplay loops can be a little grindy, to say the least, but there are momentary triumphs when you craft something that makes you tangibly tougher, earn enough skill points to gain a new perk or discover a new region to explore. All the building stuff works incredibly well, and one of the big pleasures of revisiting the same PvE server is watching your fellow players spread out and make the mark across the map, with new walls and towers emerging daily.

Yet a couple of things keep putting me off. One is the contradiction between the game’s promise of high adventure and the sheer amount of graft needed to survive and thrive. I read a lot of Conan in my youth, and I recall him being the kind of guy who’d take a sword and armour off a dusty skeleton or from the twitching hands of a dying warrior, not the sort of chap who’d collect several truckloads of rocks, tree trunks and iron ore, build a smithy and craft his own sword. You suspect that, if he had been that kind of bloke, the stories might have lost their propulsive drive. Well, guess what happens in this game?

Secondly, neither Robert E. Howard nor his worlds are known for their progressive attitudes, and while there’s something dark and exciting in their mix of bloodlust, regular lust and general-purpose savagery, there are also elements I now find awkward, even mildly repellent. In staying true to the spirit of the fiction, Conan Exiles transfers some of these elements wholesale. There’s a whole mechanic based around capturing NPCs, putting them on the Wheel of Pain and making them your thralls, so that they can do stuff for you and defend your base from the periodic Purges; who knew slavery was such a great way to get ahead?

And while Howard’s fiction isn’t devoid of strong independent women – Belit or Valeria for instance – he was also a big one for sex slaves in need of rescue and maidens chained to monoliths or rocks. Conan Exiles is thankfully devoid of the latter, but you can still build creepy temples of dark desires and general sexy time, which, to be quite honest, seem a little adolescent these days.
Again, that’s true to the fiction – which is otherwise one of the things I like about the game. I guess it’s a case of taking the rough with the smooth.

In fact, that pretty much sums up the game as a whole. It’s a game of magnificent vistas and embarrassing glitches, epic ambitions and humdrum work. The world is vast and beautiful, yet filled with dumb animals and even dumber enemies. While never less than absorbing, it can be hideously annoying too.

We should congratulate Funcom for turning this one around, and transforming a mess of survival sim into something that’s part Ark, part Minecraft and part MMO, and that’s actually accessible and fun by the standards of its genre. If only there was a little less drudgework, and a little more trampling the Exiled Lands under your sandalled feet. After all, when asked what’s good in life, Conan never answers ‘smashing rocks, chopping trees and DIY’.