Company of Heroes 2: The Learning Curve

One of the biggest
challenges with Company of Heroes 2 is that it throws you a lot of
troops to micro-manage, and doesn’t do a great job of explaining how to
do it. It’s a sophisticated game, the UI isn’t always crystal-clear, and
where the first game spent the first few hours easing you in, the
sequel pretty much throws you in at the deep end.

If you don’t know how to group units and use hotkeys to switch between them, Company of Heroes 2 isn’t really going to tell you, and both skills are essential, particularly in the large defensive battles where you might be fighting at three or four points on the map at once. To make things worse, your units need a little micro-management. They rarely change their facing unless prompted, and have a nasty habit of navigating from one point to the next in a way that takes them straight into enemy fire.

Get over this initial hump, however, and it’s a fantastically rewarding strategy game. So many recent strategy games, including StarCraft 2 and its Heart of the Swarm expansion, can leave you feeling like you’re just joining up the dots between the big narrative set-pieces that the game was designed around. 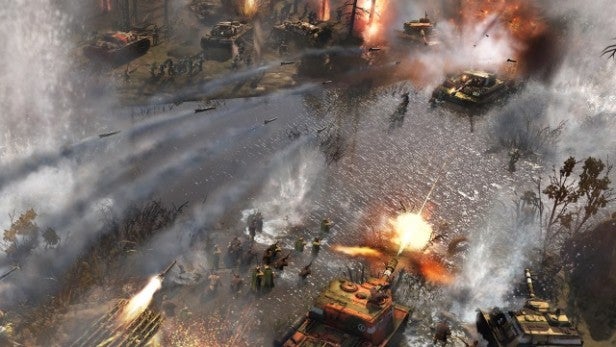 To an extent, Company of Heroes 2 does the same thing. Yet the spaces between the dots are larger, and there’s more scope to try a range of different strategies. As you flick from unit to unit, rushing out orders for your engineers to mine here, your conscripts to set up a heavy machine gun here and massing shock troops for a counter-attack, you really feel like an armchair general. When it all goes wrong, you try to learn from your mistakes and start again. When it all goes right, you’re a military mastermind.

More importantly, the single-player campaign is just the opening course. There are skirmishes, as you might expect, to be played solo against an AI player or online against human opponents, but also a Theater of War mode, which breaks down the Eastern Front campaigns into a series of challenge missions, some solo and some co-op, that can be played from both the soviet and German sides. These missions are, if anything, more interesting and tightly focused than those in the main campaign, and we’re promised more as DLC in the months to come.

Company of Heroes 2: Graphics and Sound

Company of Heroes uses Relic’s third-generation Essence engine, and with the detail levels and visual effects set to high it sets a new benchmark for RTS visuals. Admittedly, this particular benchmark isn’t as impressive as the one set by the original game, which redefined what stategy games could look like overnight, but there’s plenty of eye-candy.

It’s all in the details, from the convincing swirls of snow to the puffs of powder as bullets miss their targets. Zoom on in for a closer look and it’s hard not to be impressed by the work that’s gone into the character models or the textures. Most of all, with its exploding scenery and Saving Private Ryan levels of onscreen carnage, Company of Heroes 2 qualifies as a widescreen spectacle. With a lot of units on the screen and things blowing up all around, it’s impressive stuff. 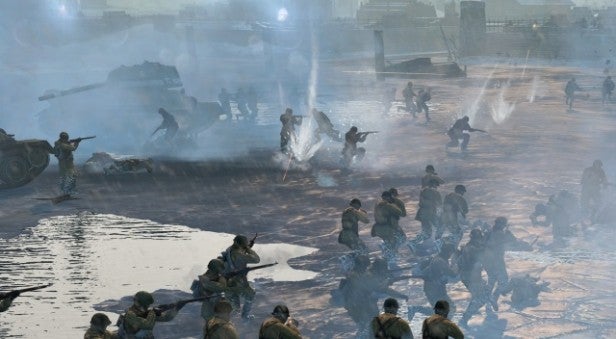 The sound also helps build the atmosphere, whether it’s the well-delivered in-game dialogue or the sheer quantity of bangs and booms going on all around you. It’s a great, immersive game played with headphones, though you might want to keep the volume down if you want to keep your hearing.

Company of Heroes 2 is an RTS fan’s RTS game, even if it’s neither flawless nor the game to put the genre back on top. It’s one of the most engaging strategy games we’ve had in ages, with enough going to give your brain and your senses a real workout, and enough depth of content to keep you hooked for months.