Company of Heroes 2 is a throwback. It’s a throwback to the days when the RTS and the FPS jointly ruled the PC gaming landscape, and an era when tight, well-balanced game mechanics were more important than the cinematic presentation or the narrative. This is both its biggest strength and biggest weakness.

On the one hand, it’s a huge, meaty package for stalwart RTS fans, who will delight in the depth of its content and the riches of its gameplay. On the other, it’s not as accessible as competitors like StarCraft II – partly as a result of some thoughtless design – and it’s nowhere near as revolutionary as the first Company of Heroes was six years ago.

Company of Heroes 2: Welcome to the Eastern Front

Perhaps its smartest idea is to move the action away from Normandy in 1944 and to the Eastern Front in 1941. It’s played out as a series of flashbacks for a Soviet lieutenant being interrogated in a post-war gulag, and this framing structure is easily the worst thing about the game. Not only are the cinematics weak, but it’s hard to balance the cut-scenes themes of ‘war is hell’ and ‘does the end justify the means’ when the rest of the game seems hell-bent on answering ‘sure, but at least it’s spectacular’ and ‘yup, bung another squad of conscripts on the firing line.’

Once you’re actually playing, however, the Eastern Front setting turns out to be brilliant. There’s plenty of variety to the missions, as the action moves from huge, city-wide battles to tense, small-squad operations in the wilds, and there’s plenty of opportunity to explore one of the sequel’s best new features: weather that actually has an impact on how you play.

Not only does snow hamper your visibility and your troops’ movement, it can also be a killer, freezing units to death unless they’re near a fire or in cover. This makes keeping your troops warm a real necessity, and removing enemy sources of warmth a valid strategy. As cover and the direction of the wind also has an effect, it gives a new level of depth to certain missions, not to mention an almost tangibly chilly atmosphere. 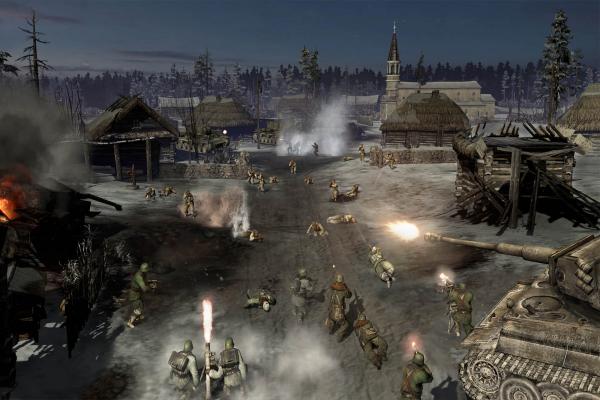 Otherwise, Company of Heroes 2 sticks pretty close to the template set down by the original. Taking control points affects the flow of resources, which in turn controls the units you can request and the abilities and equipment you can use. Units can occupy buildings and take cover for protection, while line of sight is just as important as position. Face a heavy machine gun or an anti-tank weapon in the wrong location and it’s ineffective. Particularly when defending, you need to be sure that you have all the angles covered.

Buildings can be destroyed, machine guns, mortars and anti-tank guns need to be crewed, and units earn experience and become more effective as they fight, making it crucial to reinforce and protect your best units rather than expose them to stupid risks or leave them to die. Even more than the first game, Company of Heroes 2 makes you think about your decisions and take care about how you execute them, simply because you can’t afford to lose key units. 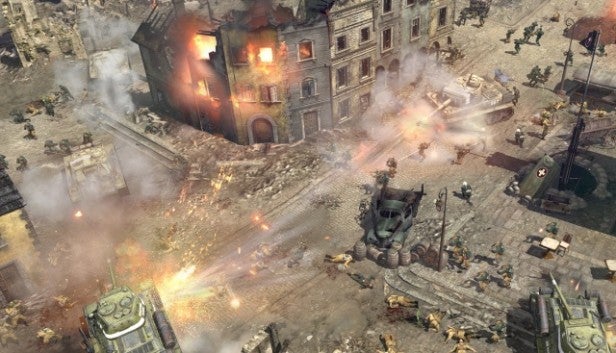 Company of Heroes 2: Conscripts and Sacrifice

There is one exception. The soviet forces rely heavily on conscripts; effectively free, poorly trained units that can be summoned to points on the battlefield at regular intervals. The skill with deploying conscripts is how you use them. They have a handy reinforce capability that allows you to bring your major units back to fighting fitness, and they can also be used to crew artillery and machine guns that you win from the German forces on the battlefield.

Sometimes, however, they’re there to be used as cannon fodder, whether to hold oncoming forces while your key units escape, or as a distraction to pull the enemy out of position while you bring in shock troops and snipers from the other side. If you want victory on the Eastern Front, that’s what it takes.

Next
Company of Heroes 2: Verdict Review