It’s always curious when the first game a new title brings to mind is something in a completely different genre, but if Relic’s new RTS has a comparison point, it’s last year’s Call of Duty 2. Like Infinity Ward’s WWII FPS, it uses new technology, cinematic techniques and great game design to persuade you to play a type of game you should be sick and tired of, and actually make it feel fresh and thrilling. Even if you never wanted to see another RTS or another WWII game in your life – and certainly not something that combined the two – you really should change your mind about this one. Company of Heroes is one of this year’s few bona fide classics. 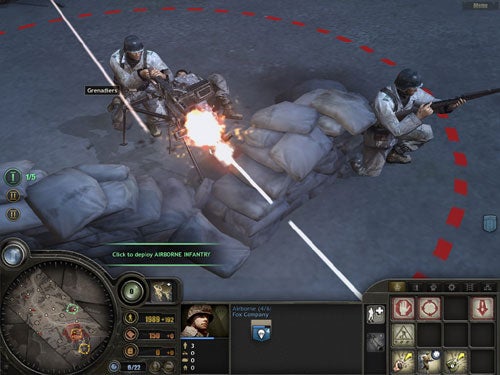 What’s so great about it? Well, like Call of Duty 2, a lot of the appeal is initially visual, lying in the astonishing level of gritty detail, the realistic animation of the soldiers, the rich surface textures and dynamic particle effects. Zoom in close and watch engineers build a bunker or Nazi troops spitting fire from a machine gun, and it’s one of the few RTS games that can actually stand that sort of close inspection. Then, as your troops rush into action, the tanks roll into town and the masonry starts flying, it hits you how interactive and open to destruction this battlefield is. If you can see it, you can wreck it, and this makes for some truly spectacular scenes. Buildings shatter when wracked by tank or mortar fire, walls will be rent asunder by speeding armoured cars, and artillery strikes fill the ground with smoke and craters. In a genre that frequently struggles to make a strong visual impression, Company of Heroes smacks your gob so hard that after a few hours you might not have much of a gob left. Be warned. 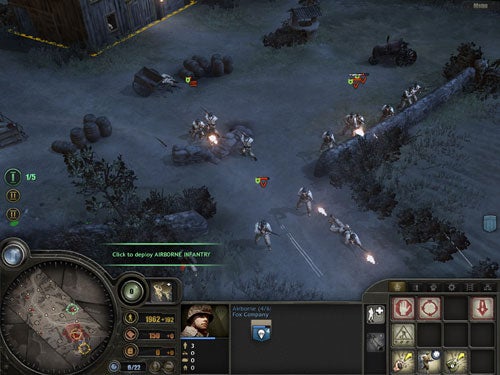 Even before that happens, you might notice that your troops don’t behave like the usual mindless morons. In Company of Heroes, as in Call of Duty 2, position and cover are everything, and getting caught out in the open is frequently a fatal error, wiping out whole squadrons at a stroke. In a lesser game this would be a nightmare, but in Company of Heroes your guys on the ground seem aware of their own mortality. They will find their own cover as they advance towards an objective, stop to return fire when attacked, and attempt to break for shelter when pinned down. You can take detailed control, ordering them to move aggressively or rain grenades or satchel bombs on enemy positions, but you don’t have to constantly micro-manage them. What a refreshing idea! 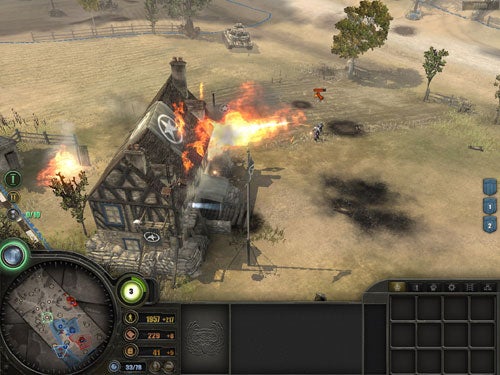 But the thing that really impresses – and that will keep you coming back for more – is the core gameplay itself. By now we all know the RTS drill. 1. Build base, 2. Defend base, 3. Expand territories and harvest resources 4. Build strike force 5. Attack enemy base. Now, in truth, Company of Heroes doesn’t throw this entirely out of the window. There is still some degree of base building and base fortification, and the game uses a system of control points to stock up on fuel, munitions and manpower – the three resources in the game. However, you can easily forget this, because Relic isn’t playing by the normal boring RTS rules. 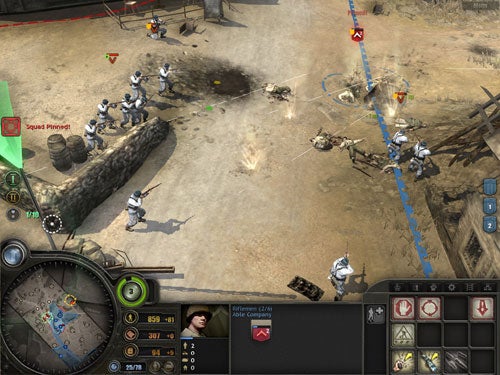 For a start, the campaign missions are heavily cinematic, with opening and concluding cut-scenes in the Call of Duty 2 style, plus linking scenes that play out as each mission progresses. You may begin a mission with simple objectives, but these can change radically halfway through, as the fiendish German forces attack or counter-attack, or as Allied defences crumble. You may start missions without a base and have to set one up, or not have one the whole way through, forcing you to call in paratroops when you need new reinforcements. And best of all, there’s a surprising amount of variety. You get search and destroy missions, missions where you must capture and hold particular control points, and missions where you must just defend for a specific amount of time, as Kapitan Kraut throws wave after wave of axis terror at you. You get frantic assaults where you send the tanks in, then follow up with troops, mortars and heavy machine guns, and equally frantic defences where you employ what resources you have and make Fritz the Hun work for each and every house, street or bridge. 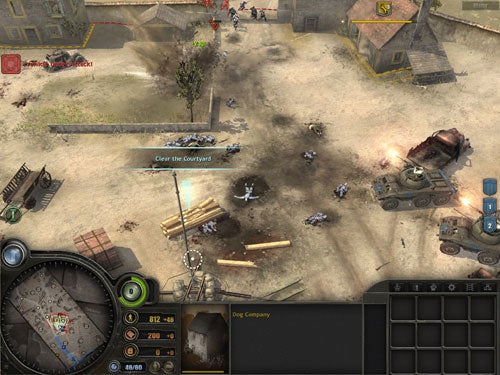 The great thing is that it never feels fake or abstract. Instead, you feel part of the overall picture, and that your actions have real consequences, both for your men and the battle for Europe. It’s the first RTS that has ever made me feel guilty about the senseless waste of men. And this immersive, emotional, cinematic feel is maintained by the soundtrack, with music kicking in at appropriate moments of high drama, and awesome multi-channel sound effects that dish out ear-ringing quantities of blood and thunder. 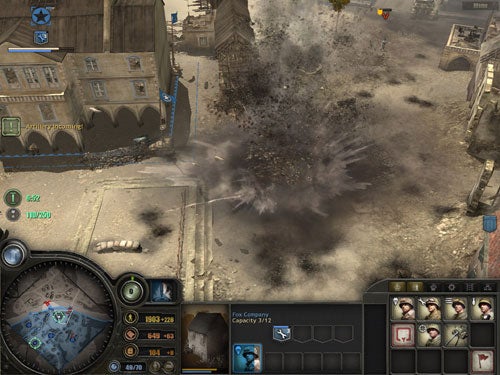 And that’s not all. I’ve already mentioned how important cover is, but probably not emphasised enough how much Company of Heroes makes you think about the map and where you can shelter, sneak or snipe from. Even the facing of troops is vitally important. For instance, Germans machine-gun emplacement will be absolutely lethal from one direction, making a head-on assault suicide, but they are vulnerable from the side or the rear. Sneak in a trooper with a timely grenade, and you can clear it out with minimal casualties. What’s more, both you and the enemy can deploy troops inside buildings, firing out from windows to defend a public square or strategically positioned farmhouse. Again, this makes it hard to deploy a headlong assault, but if you can’t shoot them out, why not blast them to smithereens? Bring in the tanks or mortars, and those snipers or machine-guns no longer look so deadly. After all, they can’t hide behind walls if the walls have been pounded to dust.

The importance of facing extends to the heavy artillery. Big guns only work in an arc of fire, while tanks are more vulnerable at the sides or the rear, making anti-tank actions not a question of firepower but a case of outflanking and outmanoeuvring, or just simply ganging up from all sides. Satisfyingly, even the weakest troops can help here. Most have additional weaponry, grenades, satchel bombs, sticky bombs or optional flamethrowers, that can be put to good use against harder units or installations, and many maps have bigger guns or machine guns that can be captured and utilised by your most basic soldiers. In this game, a squad can take out a tank if they’re moved rapidly and intelligently, and this makes for a wide variety of shifting tactics. And the AI is perfectly capable of employing these as well. In other words, Company of Heroes keeps you constantly on your toes. 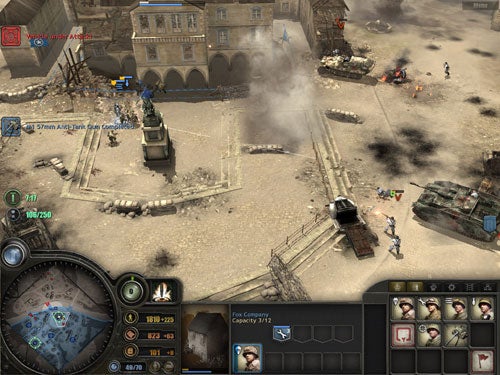 A lot of these changes may seem initially like tweaks rather than radical transformations of the RTS game mechanics, but the cumulative effect is to make the game feel new and unpredictable. You’re not just doing what you’ve done a million times before; you’re actually thinking on your feet. You need to. The enemy AI is merciless, and even in Easy mode, it’s constantly probing your defences and finding new ways to keep your troops pinned down, halt your ill-planned advances or batter your base from an angle you haven’t thought of. In Medium mode, it needs real judgement and determination to get through later missions, and – personally – I don’t even want to know how hard it plays in Hard mode. There’s a long single-player campaign and a clutch of single or multiplayer skirmish missions, and while there are only two factions to play with, I can’t imagine anyone getting through Company of Heroes too speedily. 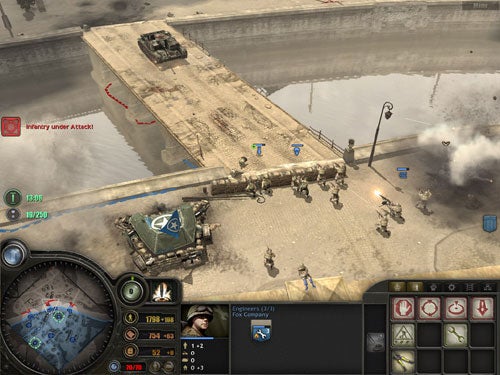 Any gripes at all? Well, I wish that a) the game would make it clearer when your base was being attacked and b) that anti-tank batteries and troops would be a little more responsive when units or installations nearby were being attacked. Just because your anti-tank unit is pointing North, it shouldn’t be beyond them to haul their lazy asses around and tackle the Panzers obliterating your HQ from the West. Trust me – they would notice what was going on. It’s just that the average Company of Heroes mission gives you so much to do, that unless you’re a master multitasker, you can easily get caught up in an offensive, only to return and find that a single tank and two scrawny guys armed with flamethrowers have wandered in and practically wiped out your HQ. 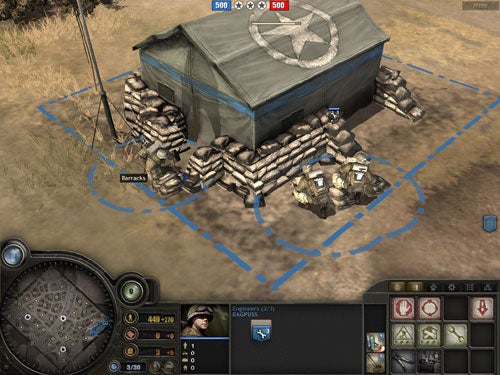 Still, this isn’t a disaster. It just makes you work harder for the win. Forget all the underwhelming RTS games to have emerged so far this year – Company of Heroes makes you wonder how we’ve put up with such meagre rations for so long. It throws mediocre games like Rise & Fall and Star Wars: Empire at War into harsh perspective, and even embarrasses games of the quality of Rise of Legends or Lord of the Rings: Battle for Middle Earth 2. In other words, it’s utterly unmissable. So don’t.


A game that established new benchmarks for the small-scale RTS, and one of the few classic PC games to emerge this year. Sign up for this company as soon as you can.